I've featured this bike in a couple previous blog posts but never took the time to photograph it well, so before I send it off for display I wanted to make sure I got some decent photos.

I acquired this bike from John Parker a couple years ago after the original owner gave the bike back to him after a chance encounter at a motorcycle show John was promoting. According to John this was one of the first 3-5 bikes he ever built and the first bike he ever sold under the Yeti brand, following his acquisition of the Sweetheart Cycles brand and tooling. I’ve told the story to several old time Yeti guys (Russell, Frank and Chris H) and before I could get to the part where the bike was featured in the window at the Emily K bike shop in Santa Barbara they all beat me to the punch saying they remember seeing it there. I spoke with the original owner and she fondly remembered buying the bike and meeting John who told her she was buying the first one of his bikes. So, there you have it, that’s as much as I know about it… Is it Yeti #1, hard to know for sure. But it is certainly a very special bike if you’re a fan of the Yeti brand. 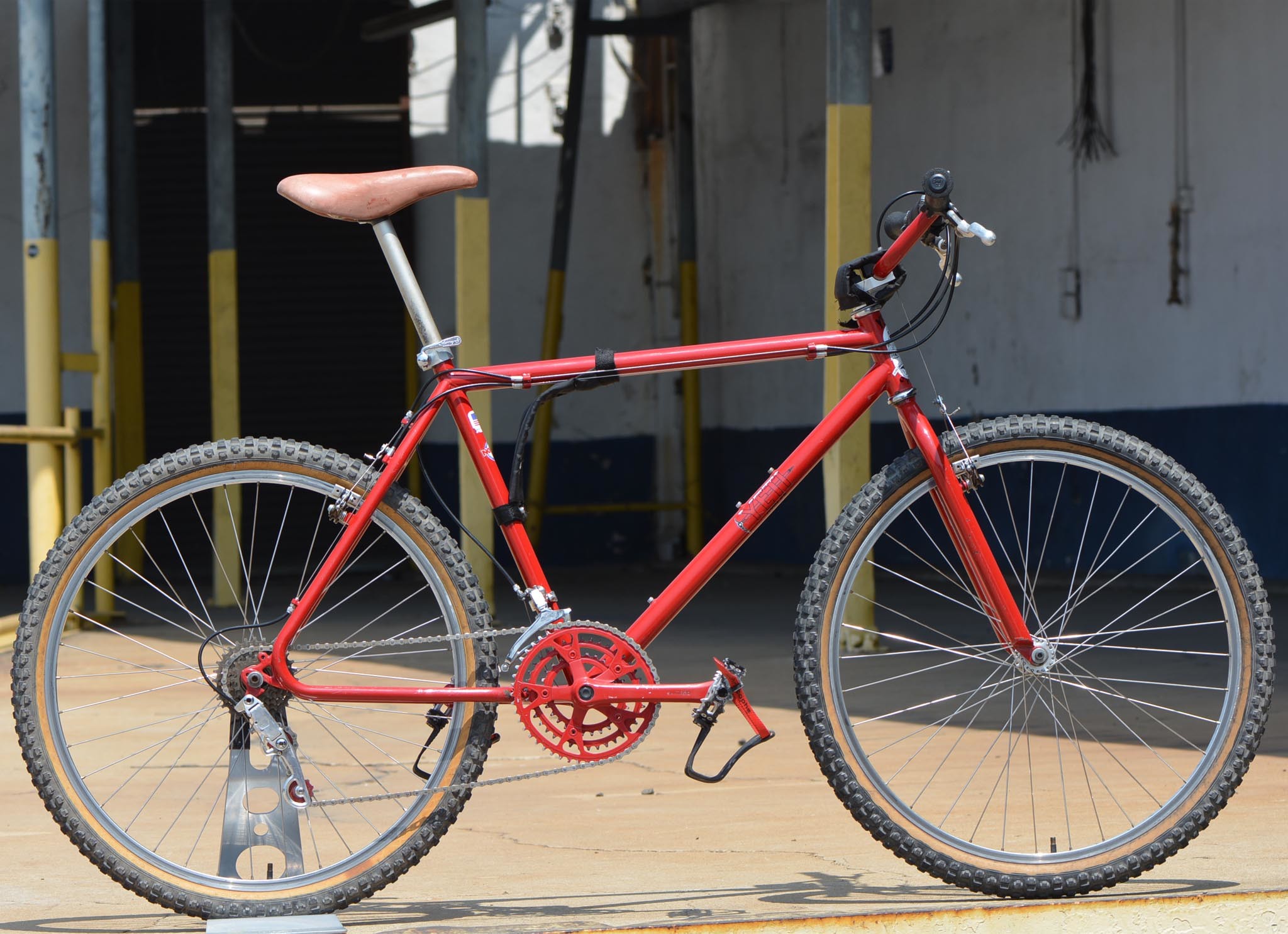 For all intents and purposes this bike is a late model Sweetheart Cycles Moto Cruiser. The only difference is the cable routing (some early MCs had euro BBs, plate style dropouts and other unique features). Russ Woorley raced on a nearly identical Yeti during the 1986 season. 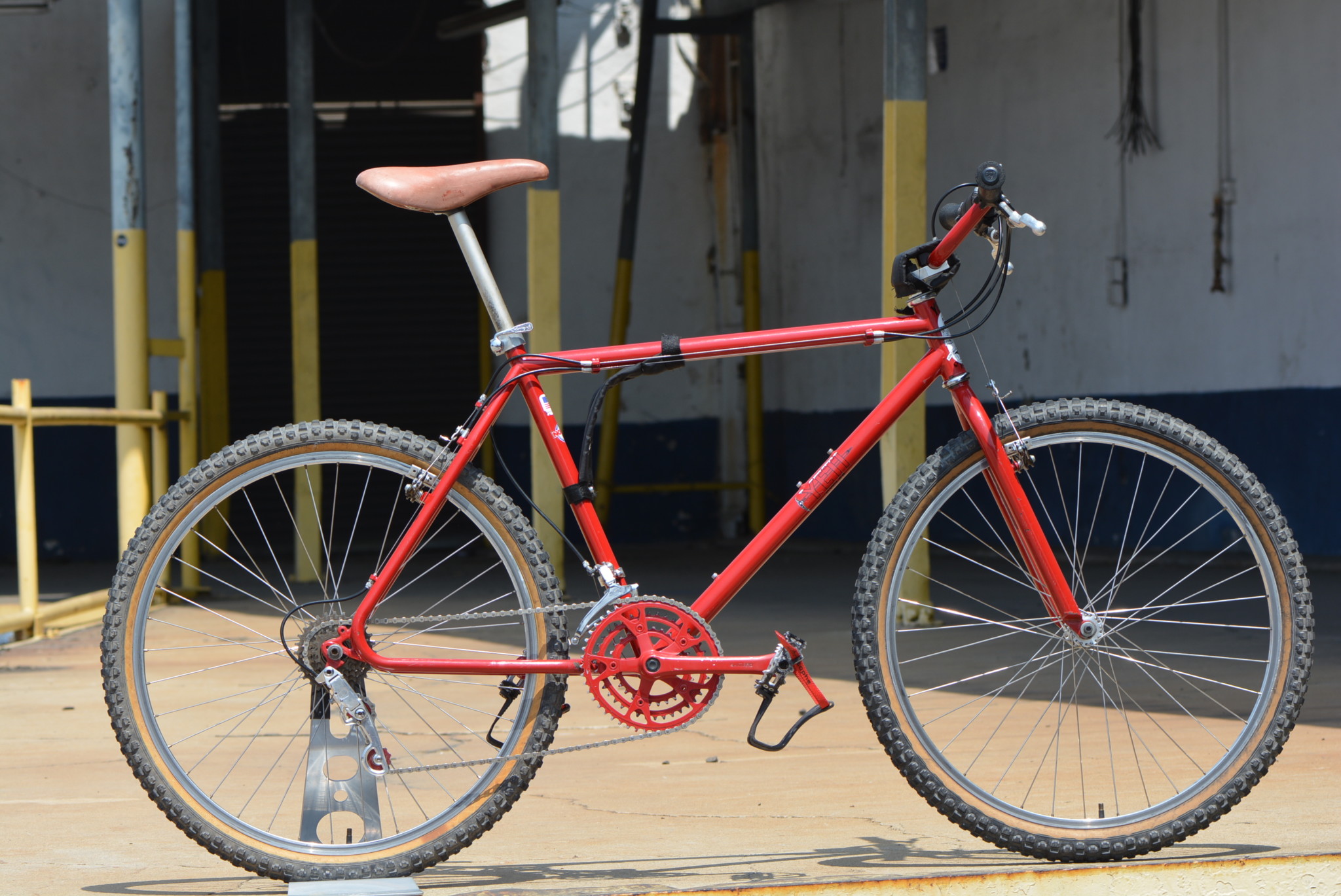 The BMX style bars are probably the most striking feature of this bike. To think that this was considered acceptable Mountain Bike gear once upon a time is pretty amazing. 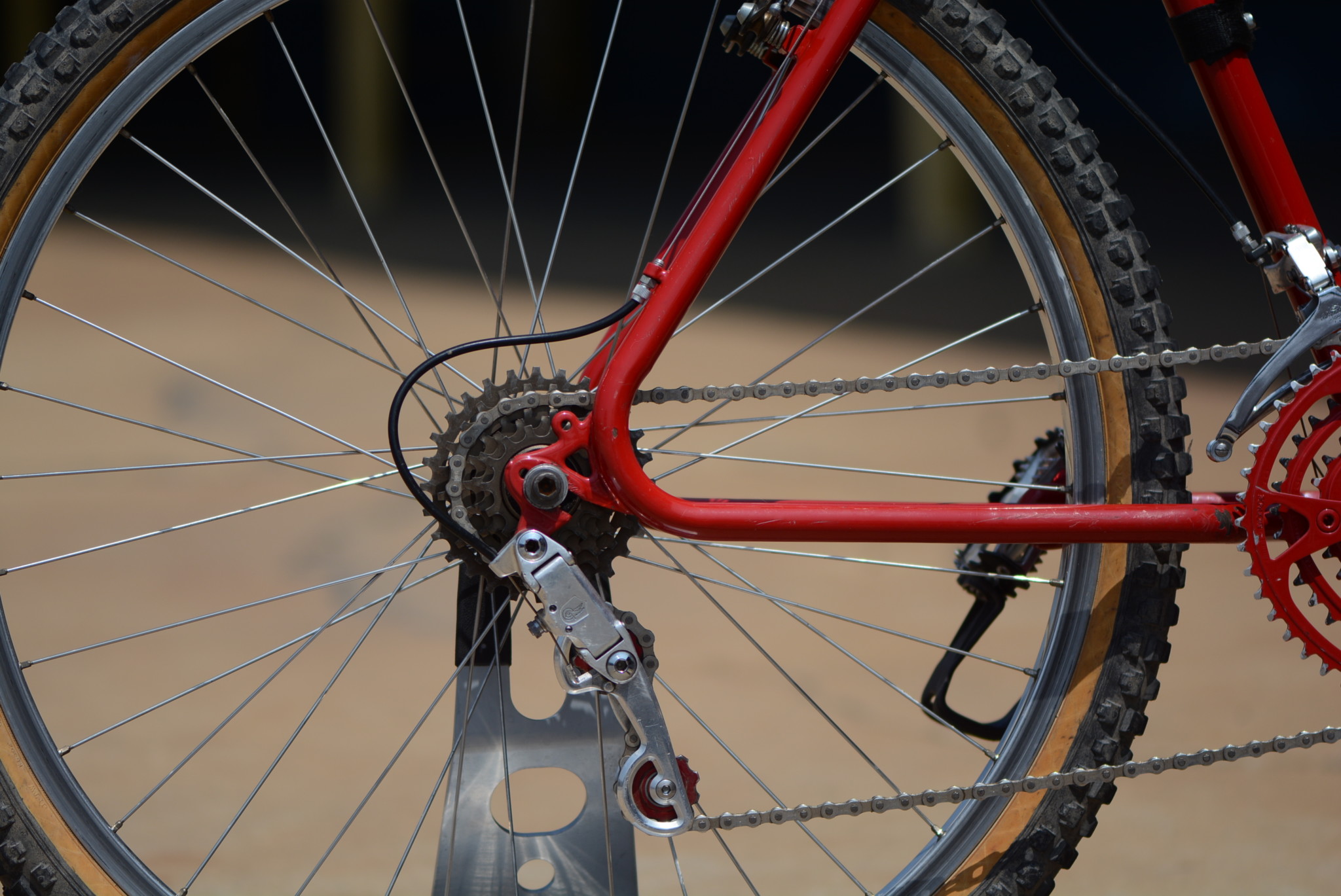 The famous loop stays that have gone on to characterise Yetis for decades to come. I’m not sure why John chose to run Campy derailleurs and Simplex shifters, perhaps it was just what he could get. But the choice didn’t do the bike any favours on the trail. A Shimano XT Deerhead group would have been a much better choice, but perhaps the fact that the bike wasn’t very rideable contributed to current condition of the bike – it never got much use 🙂 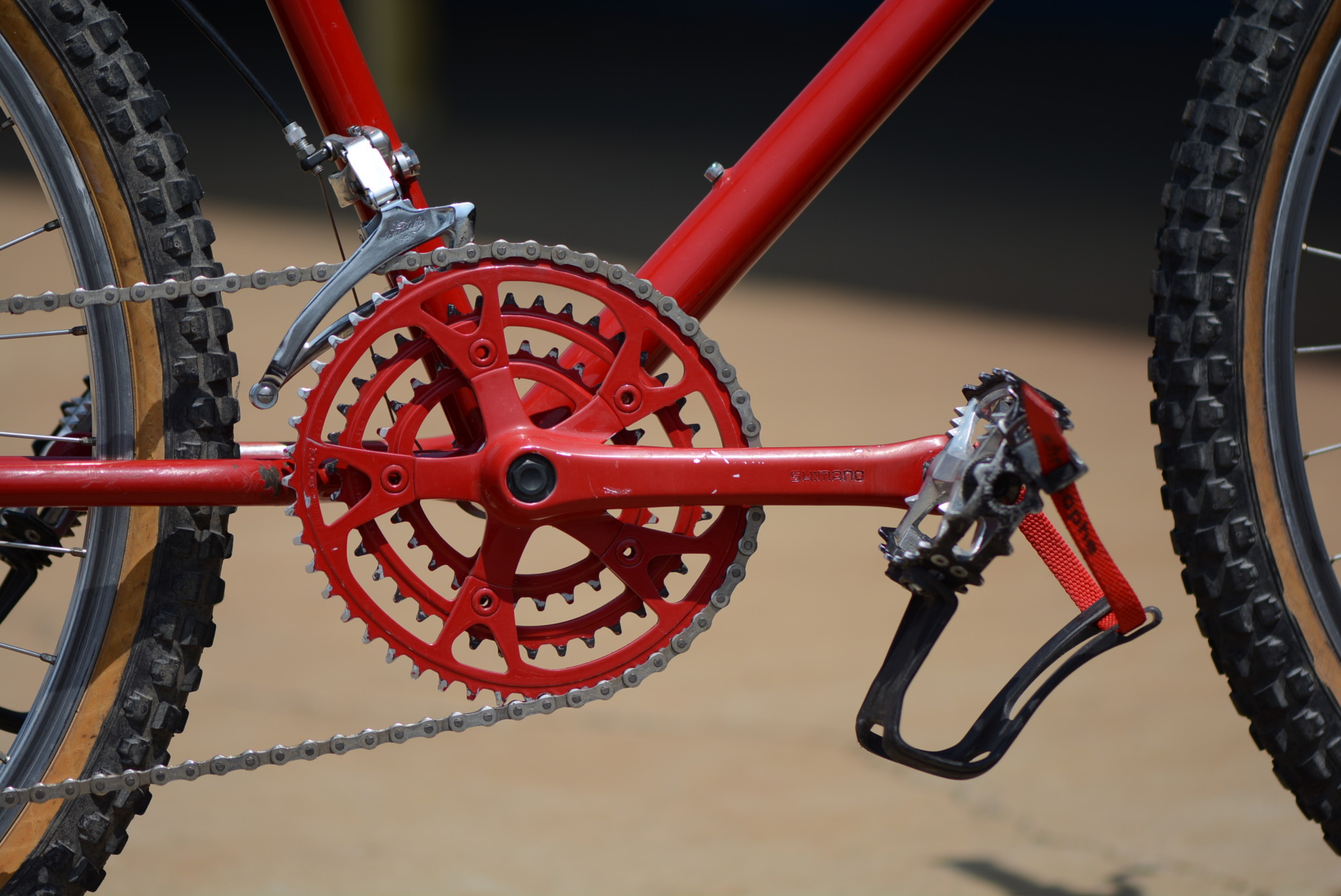 John said he powdercoated the cranks that Shimano loaned him for testing or evaluation so that they would not ask for them back. 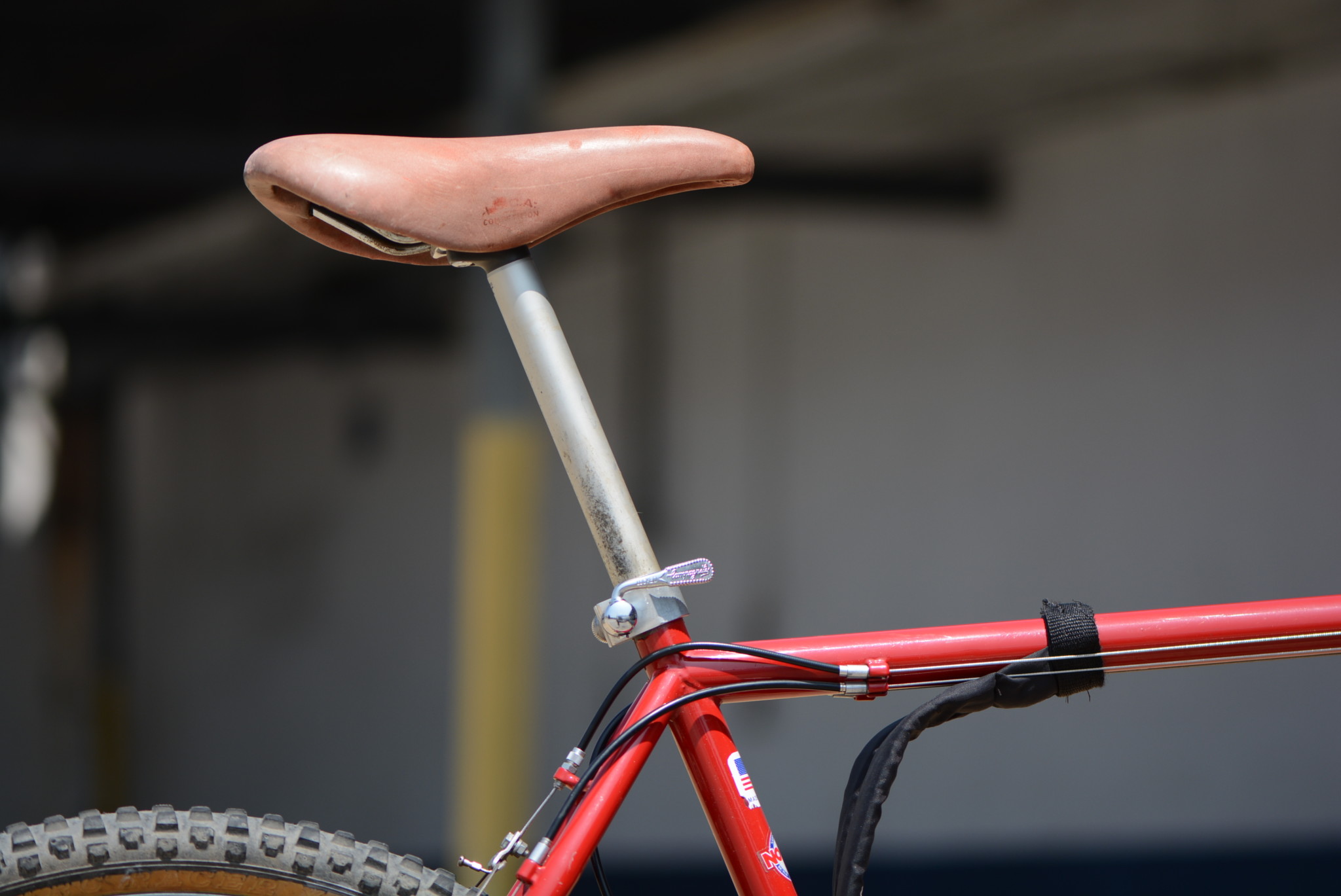 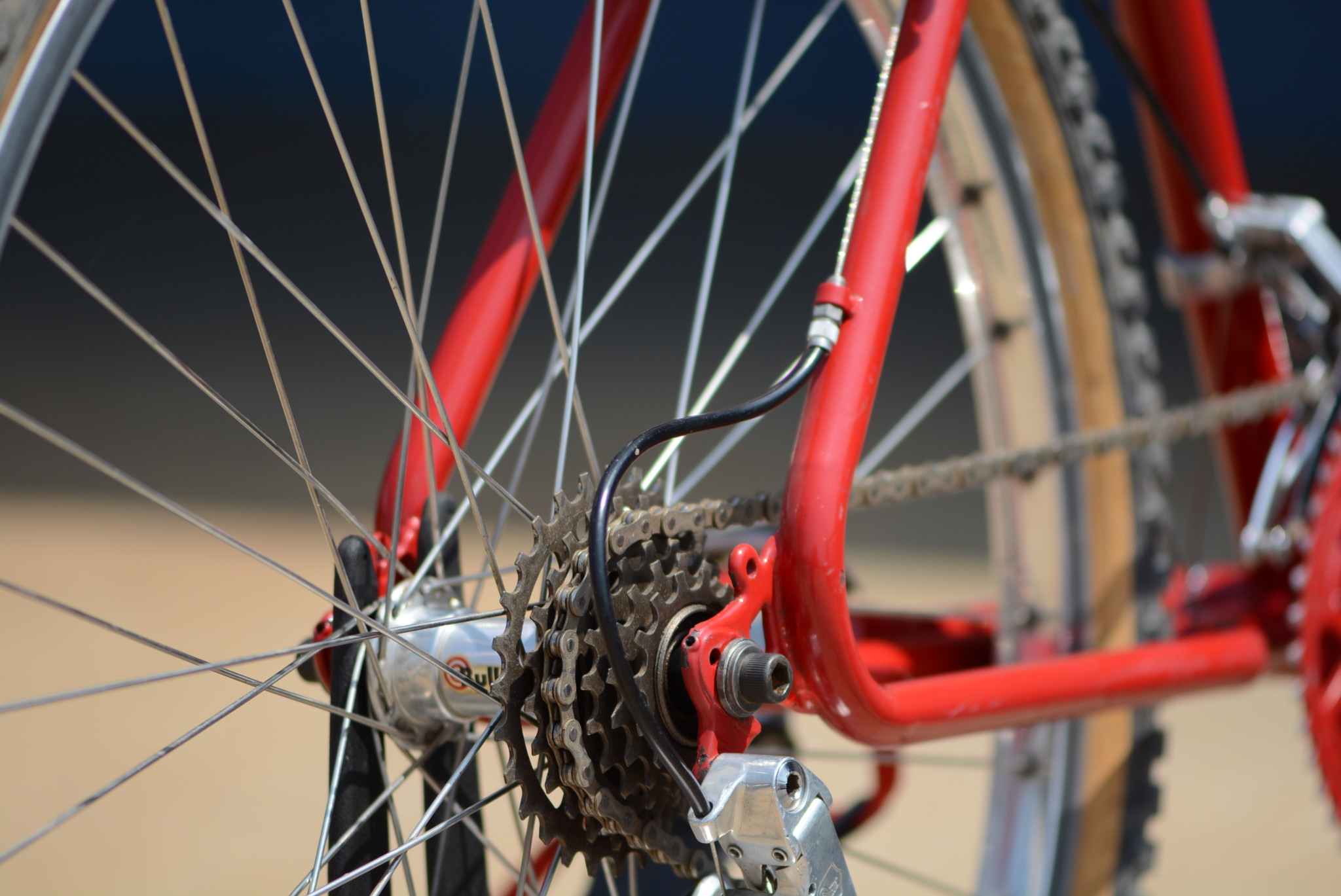 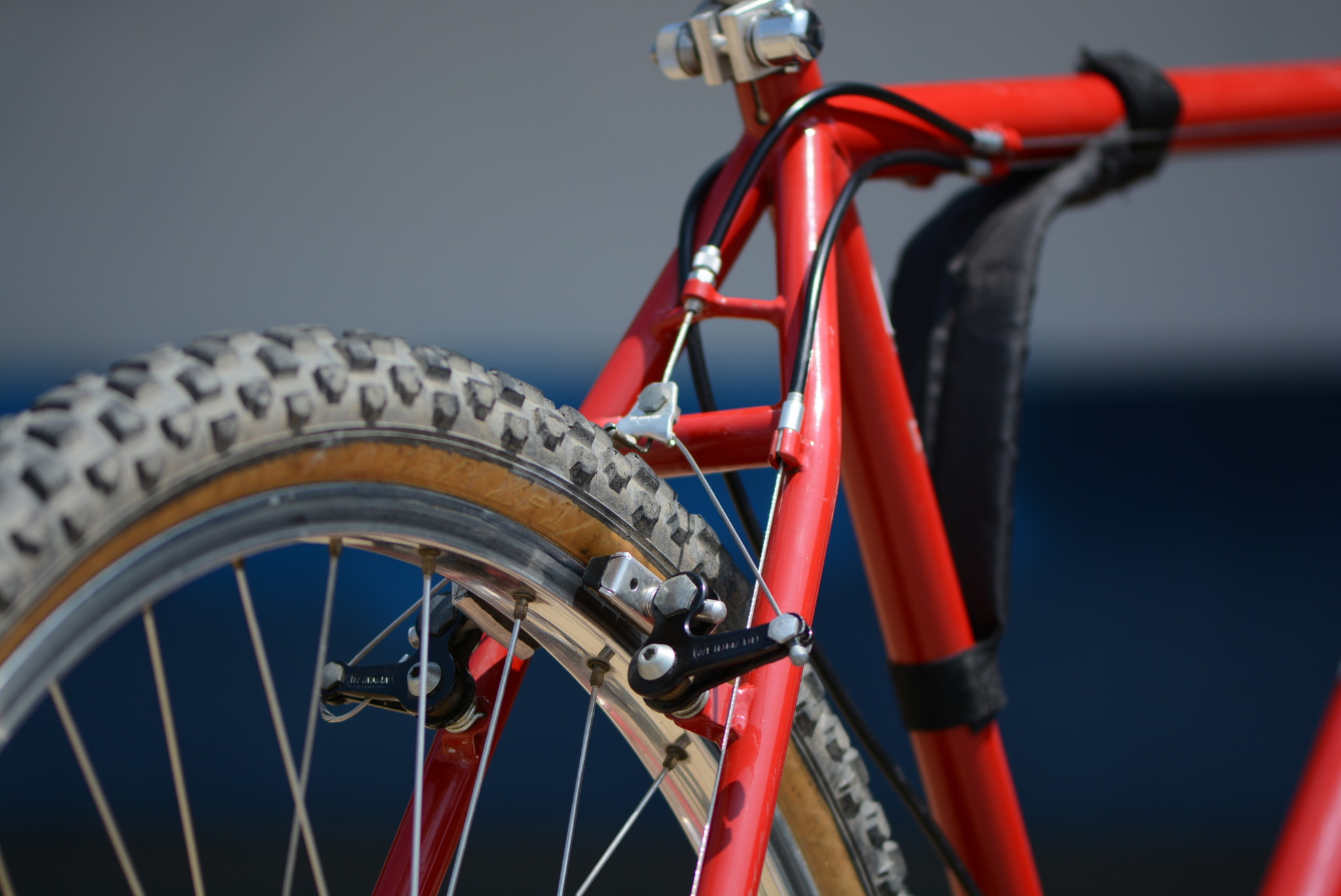 While the bike handles really well and can be ridden rather aggressively when other bikes of the era give up the ghost, stopping and shifting are not the strong suits of the package. You really have to be on your game and have your head 50-60 feet ahead of you on the trail to give yourself ample time to shift or slow down or else you’ll get tossed. 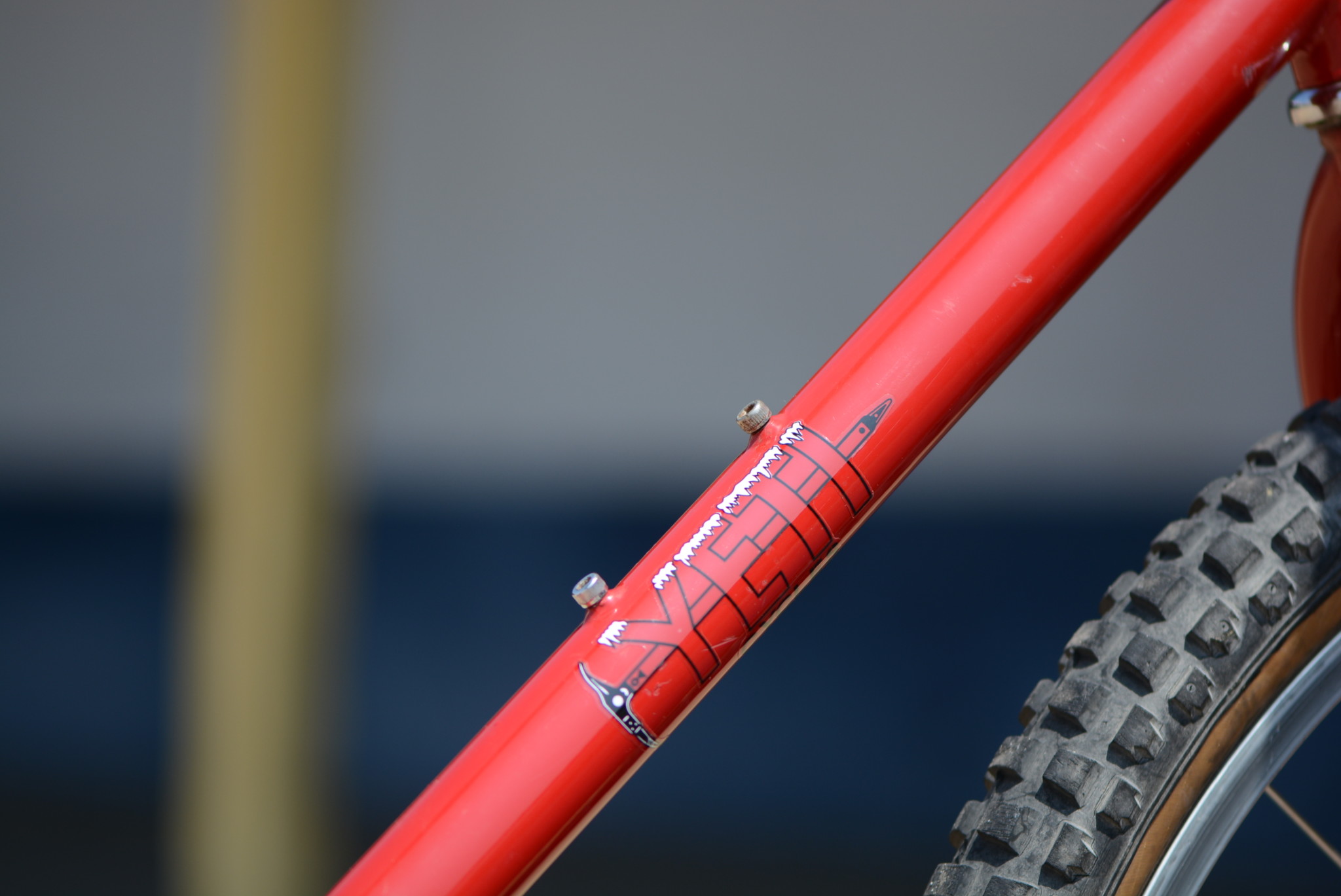 When the bike was first sold it didn’t have any decals and John provided an Ice Axe decal to the original owner later on. There are photos of the bike that show this decal on the down tube. They were later removed in an attempt to deter theft by removing any identification. 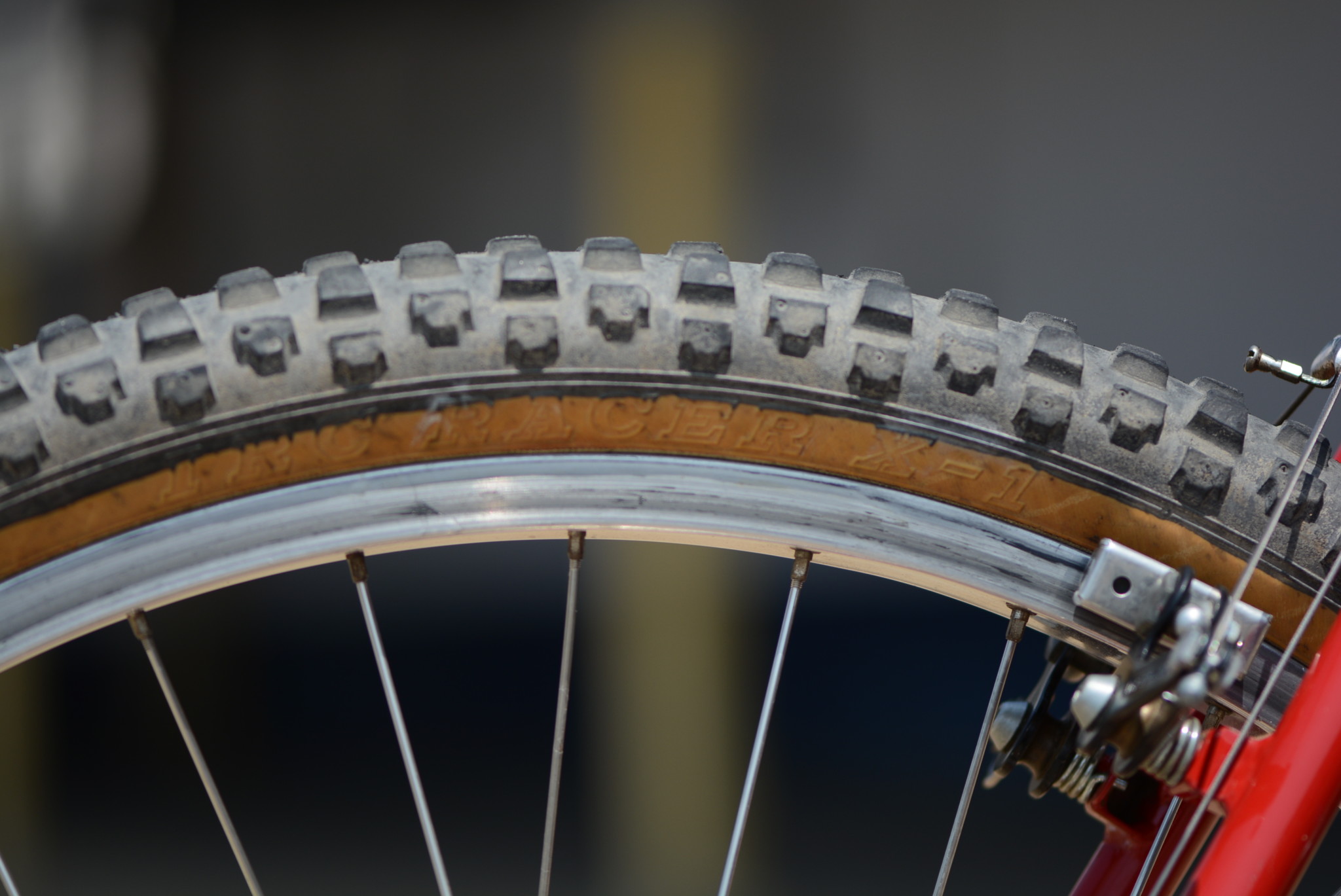 IRC X-1 tires are some of the best mountain bike tires from the early days. They were some of the more aggressive tires available before companies like Specialised, Panaracer and Onza came on the scene. 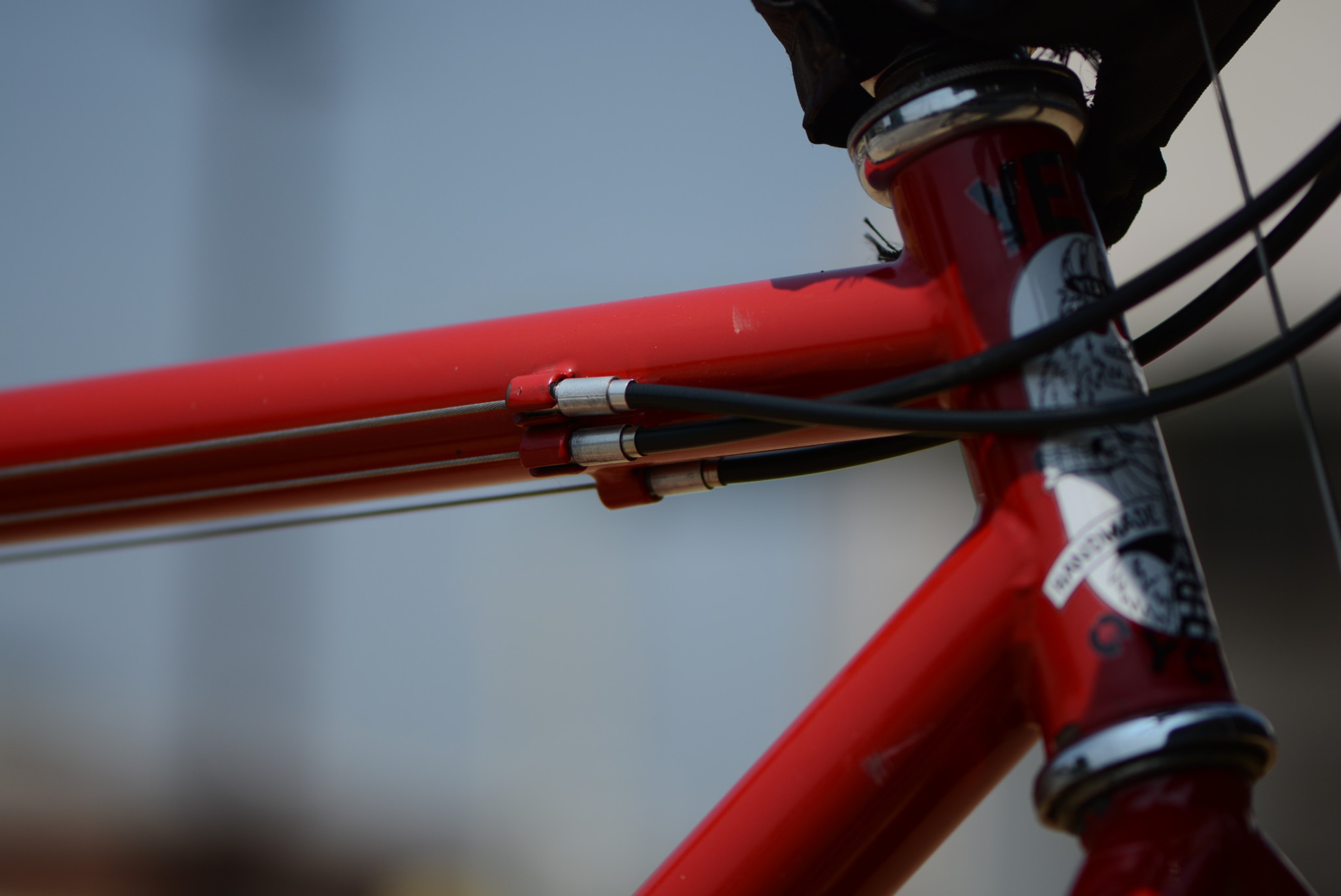 Yetis are famous for their top tube cable routing and this bike’s routing is the precursor of the better known 1-2-3 o’clock configuration used in the eventual FROs and subsequently the Ultimate and ARCs for decades to come. 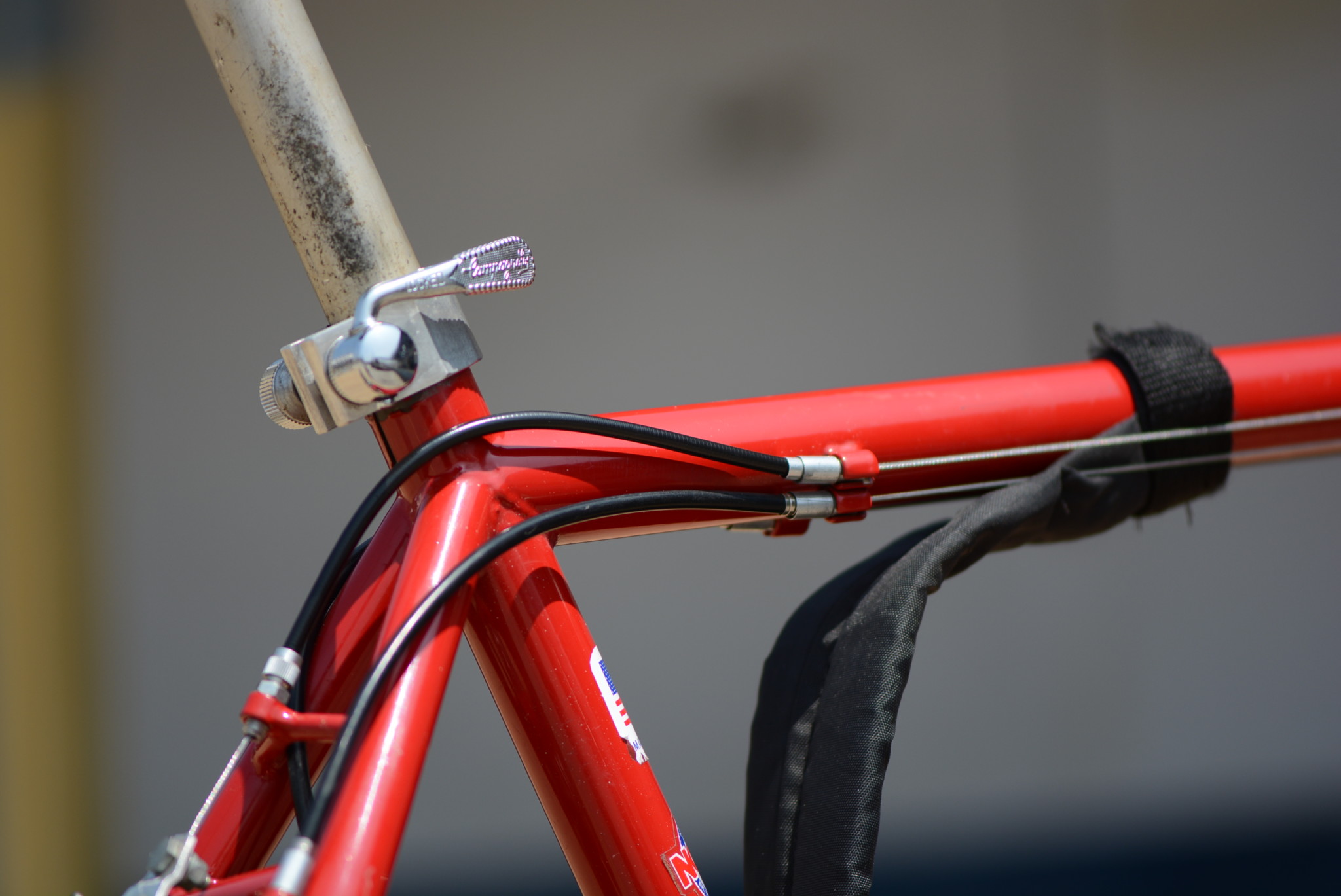 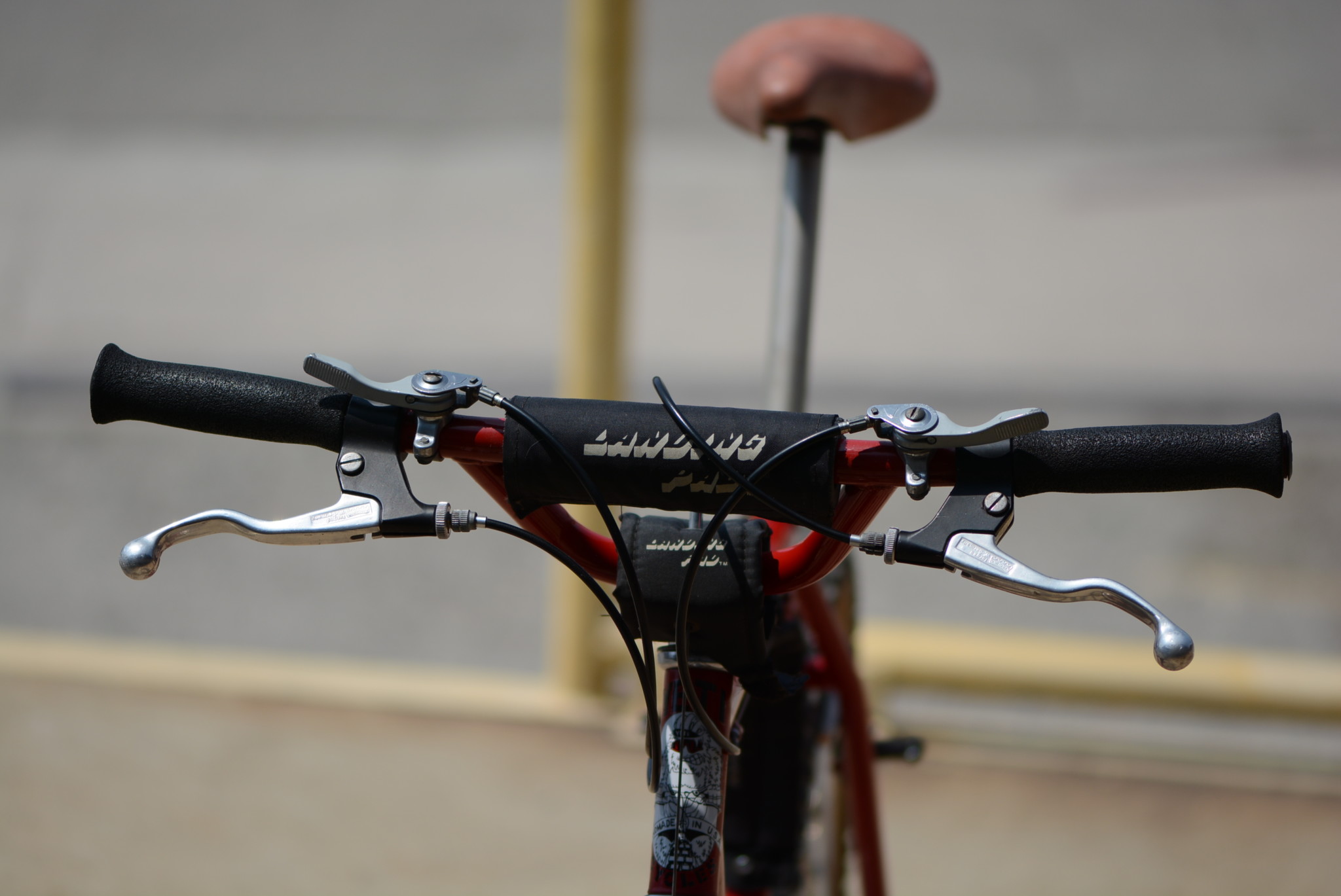 This is literally the cockpit shown on the first generation Yetiman headtube badge. 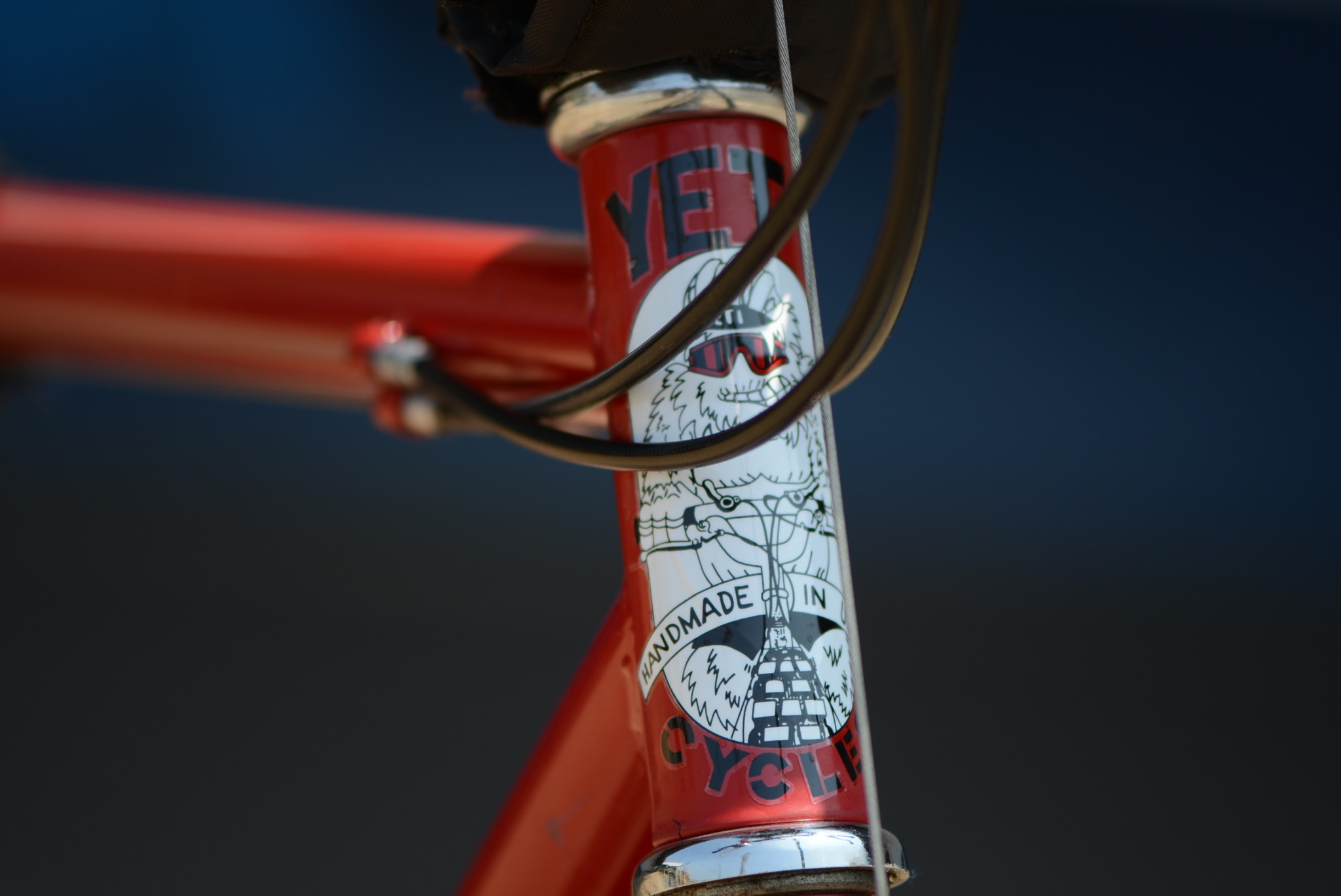 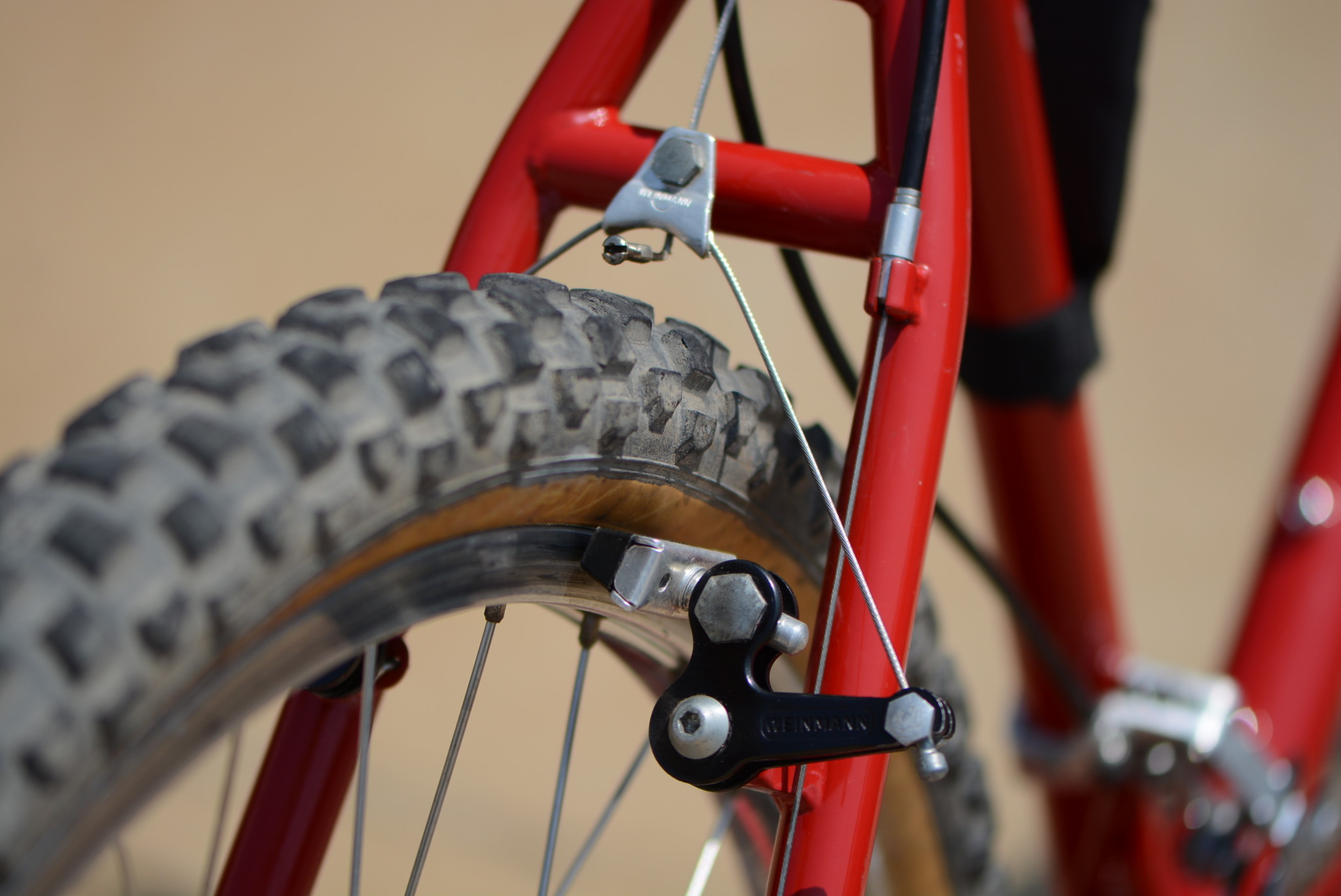 Weinman brakes on Weinman rims (26mm rear and 23mm front) provide braking duties as best as they can, which is to say not very well at all. 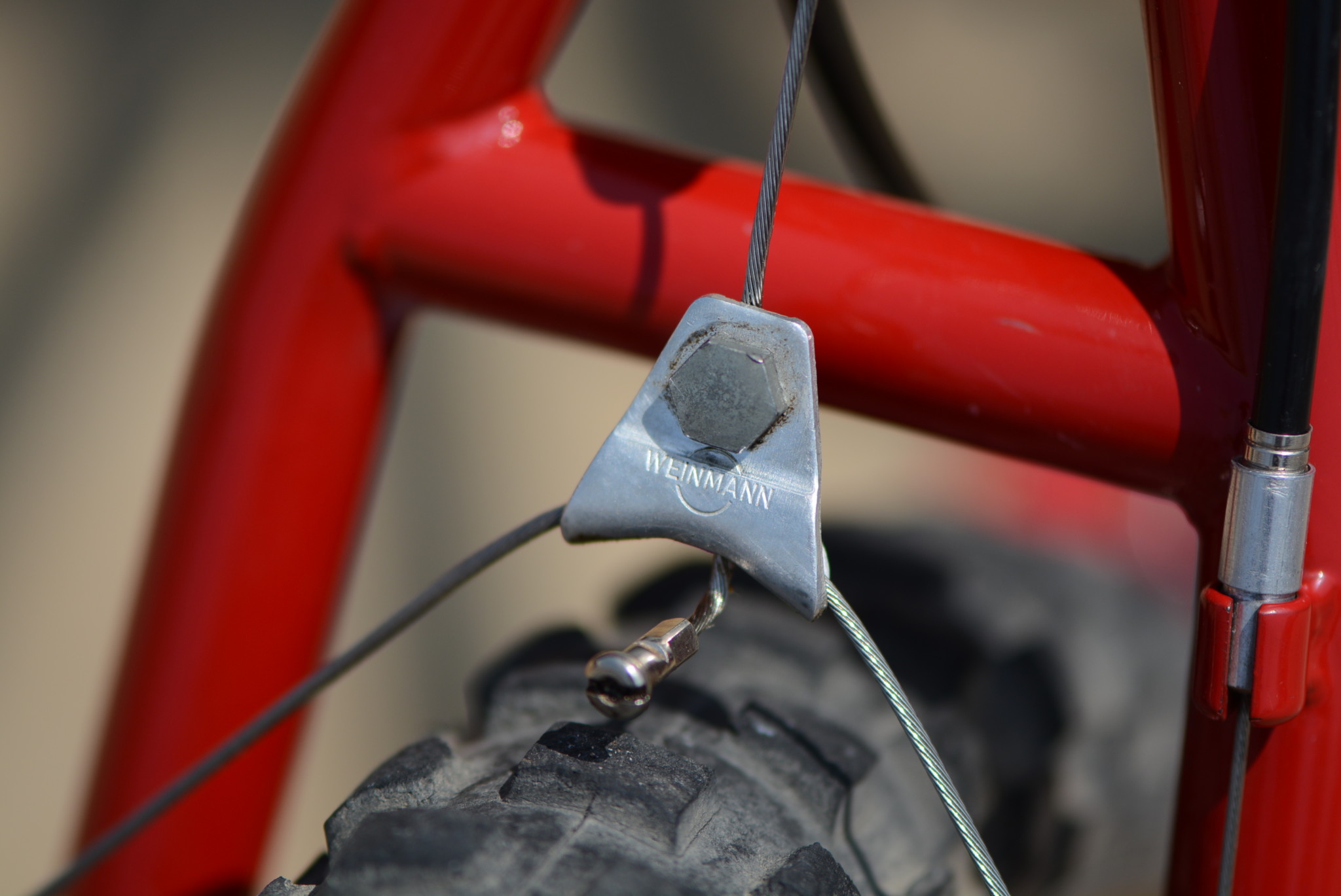 I liked how the original bike used spoke nipples for brake cable ends, and so I decided to keep it that way. 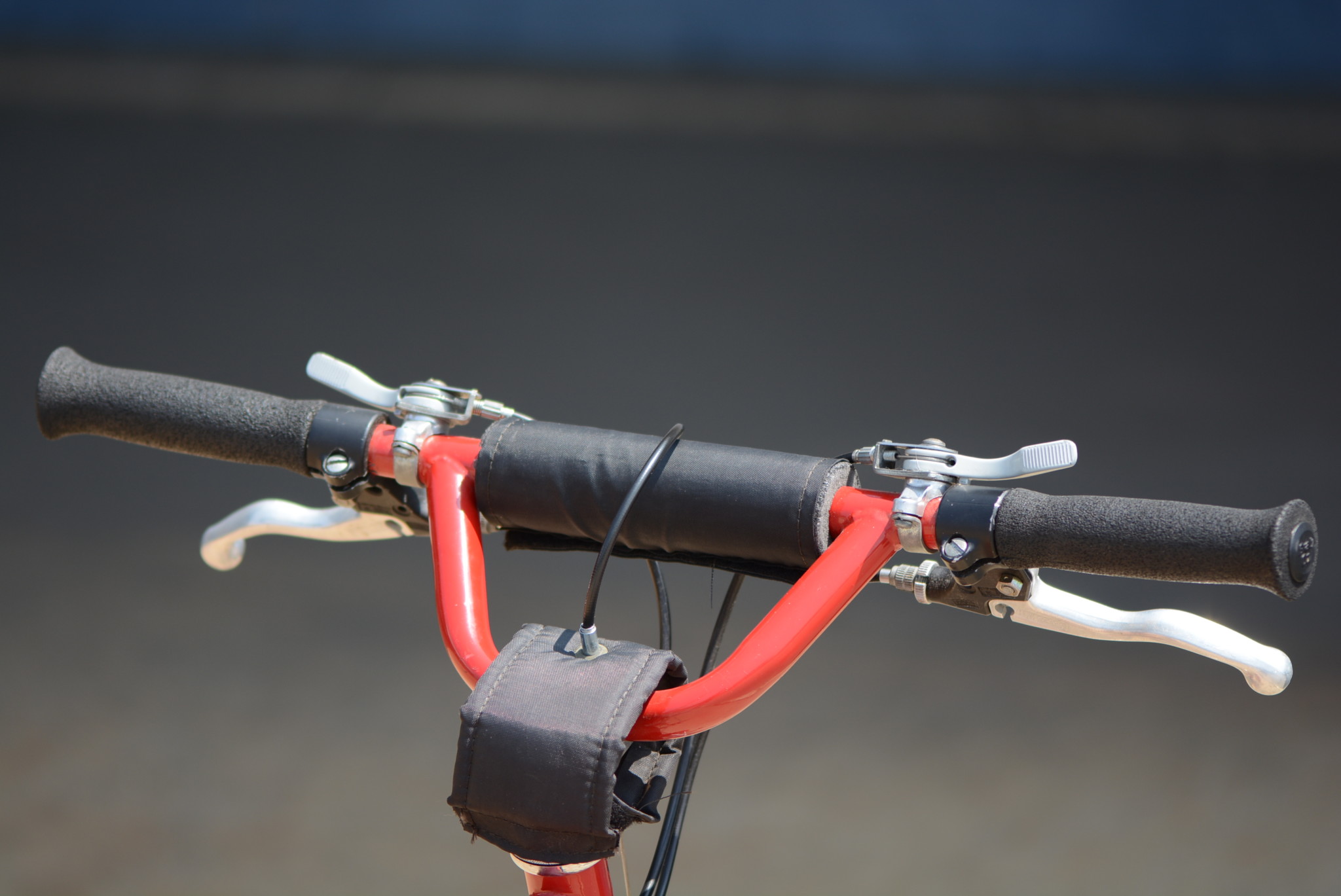 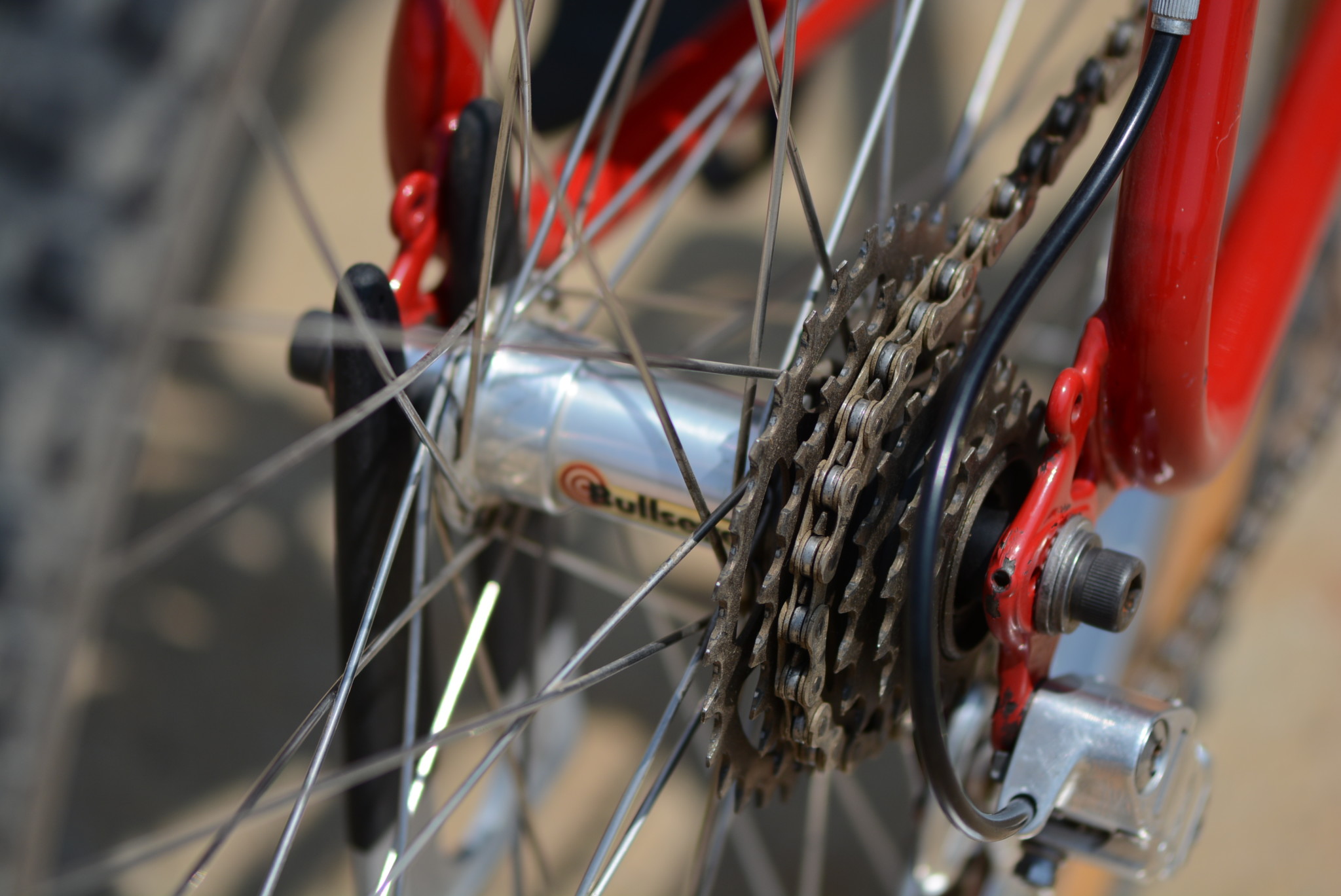 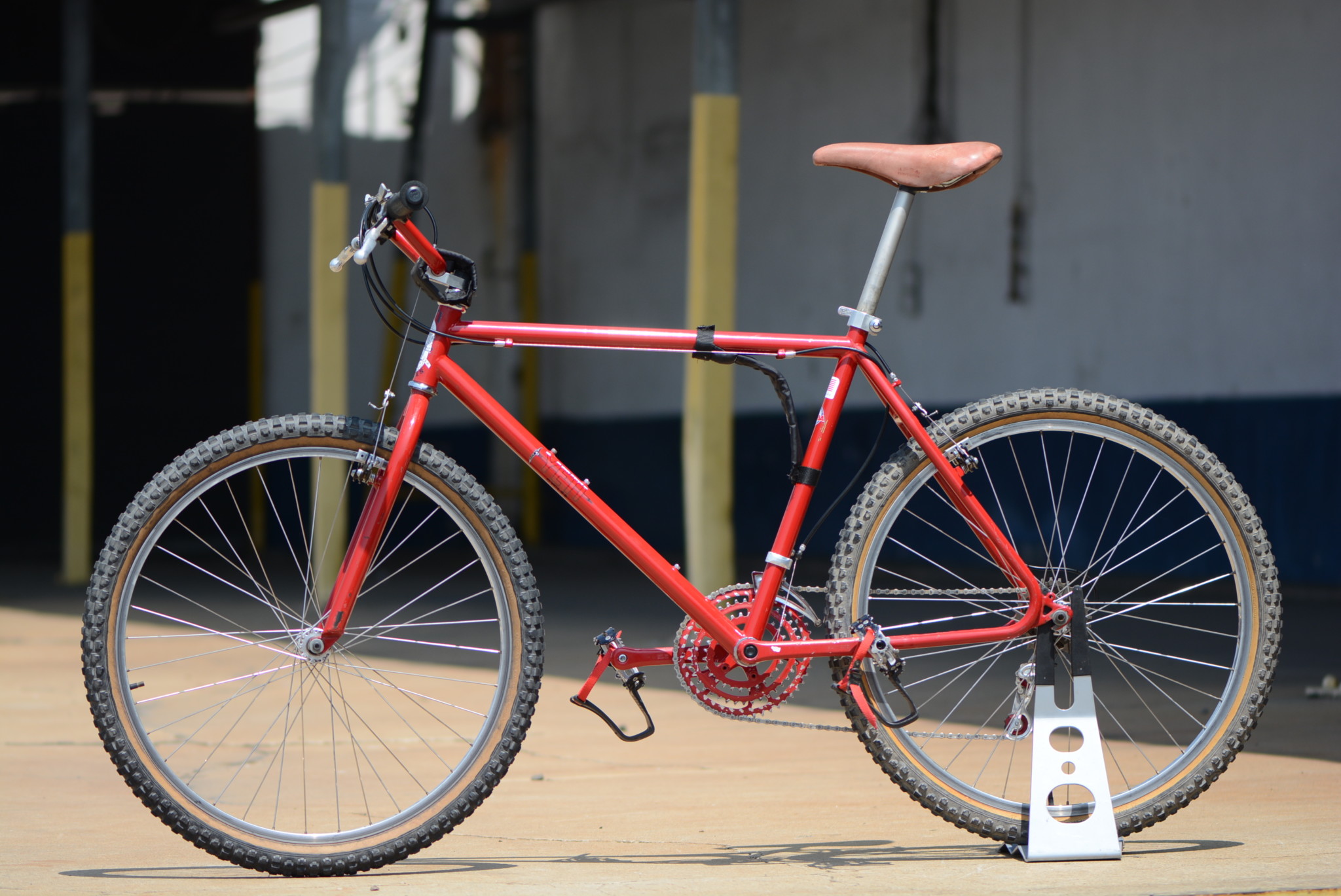 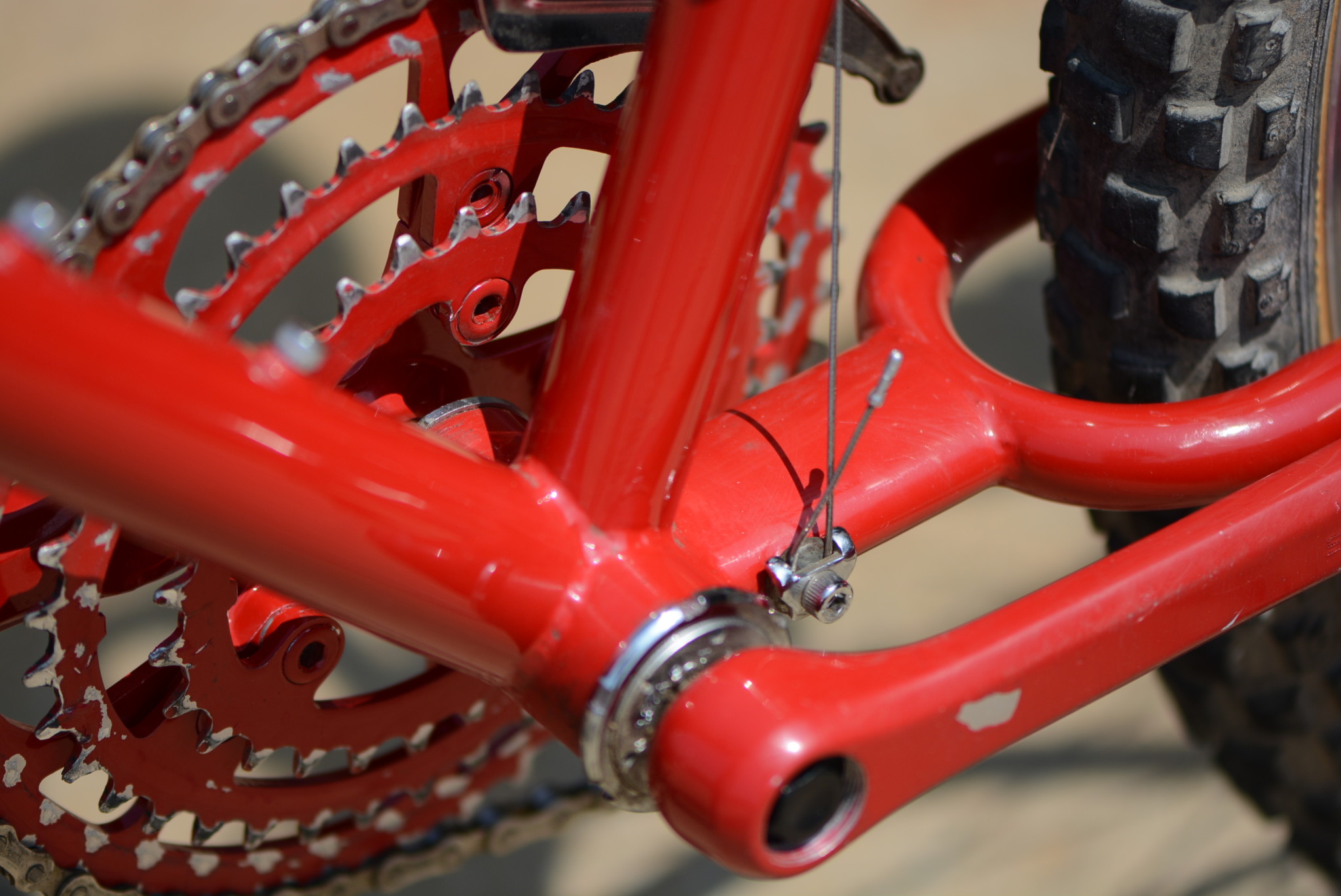 An innovative way of actuating a bottom pull front derailleur from the top. Top pull front derailleurs didn’t come out for another 5-6 years and this type of routing (later with a pulley wheel) was used on Yetis, Treks, Fats and others who wanted to run the cables along the top tube. 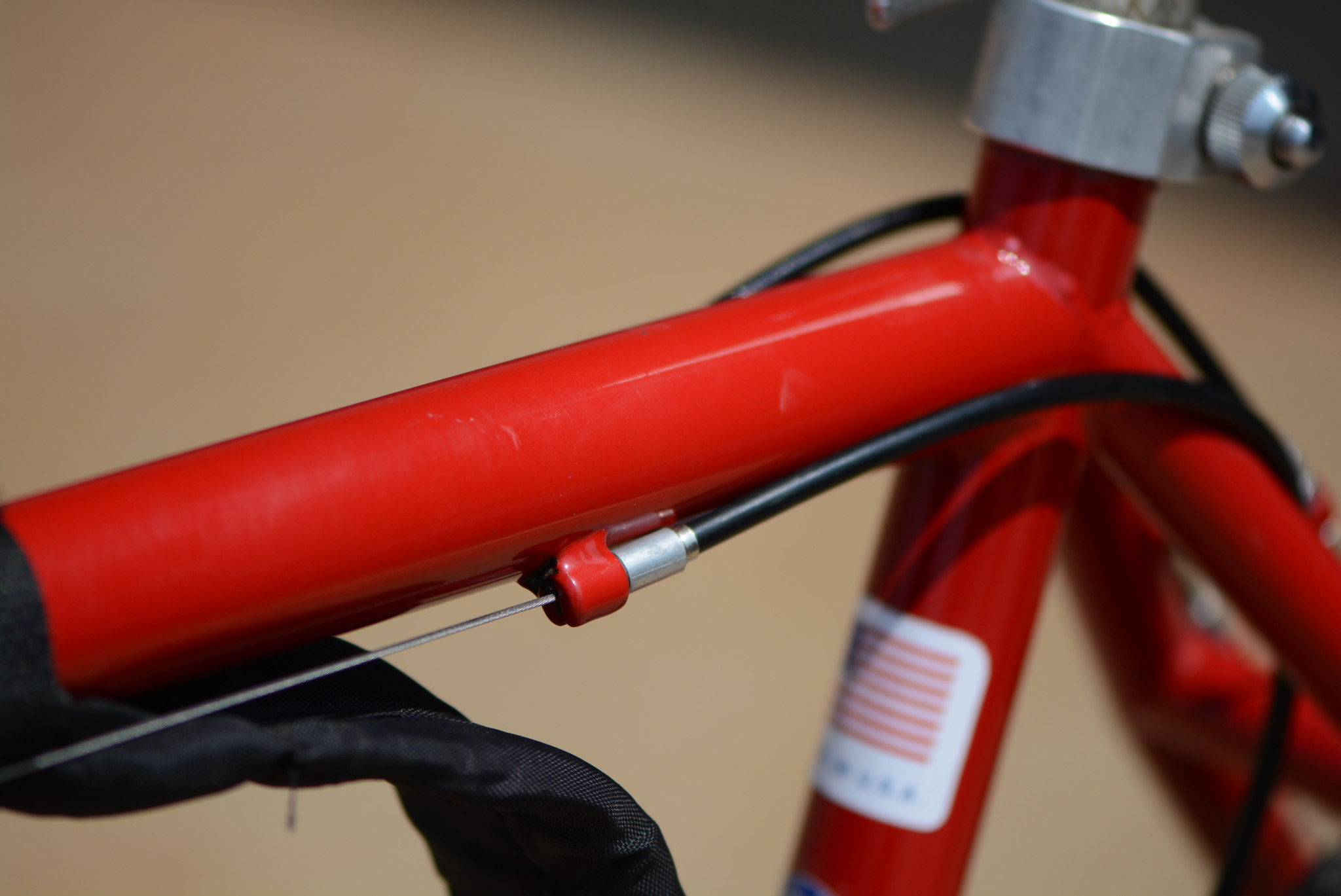 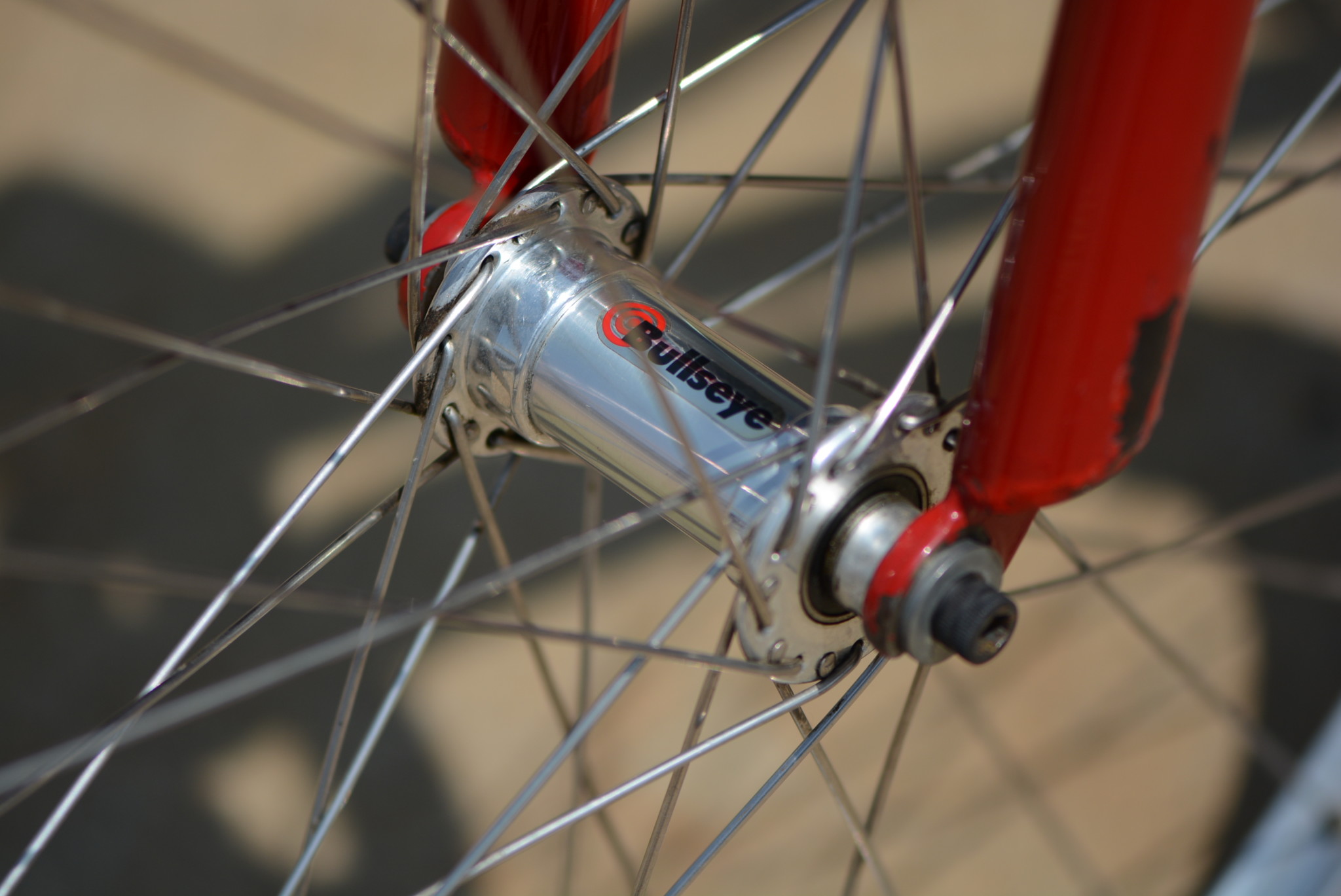 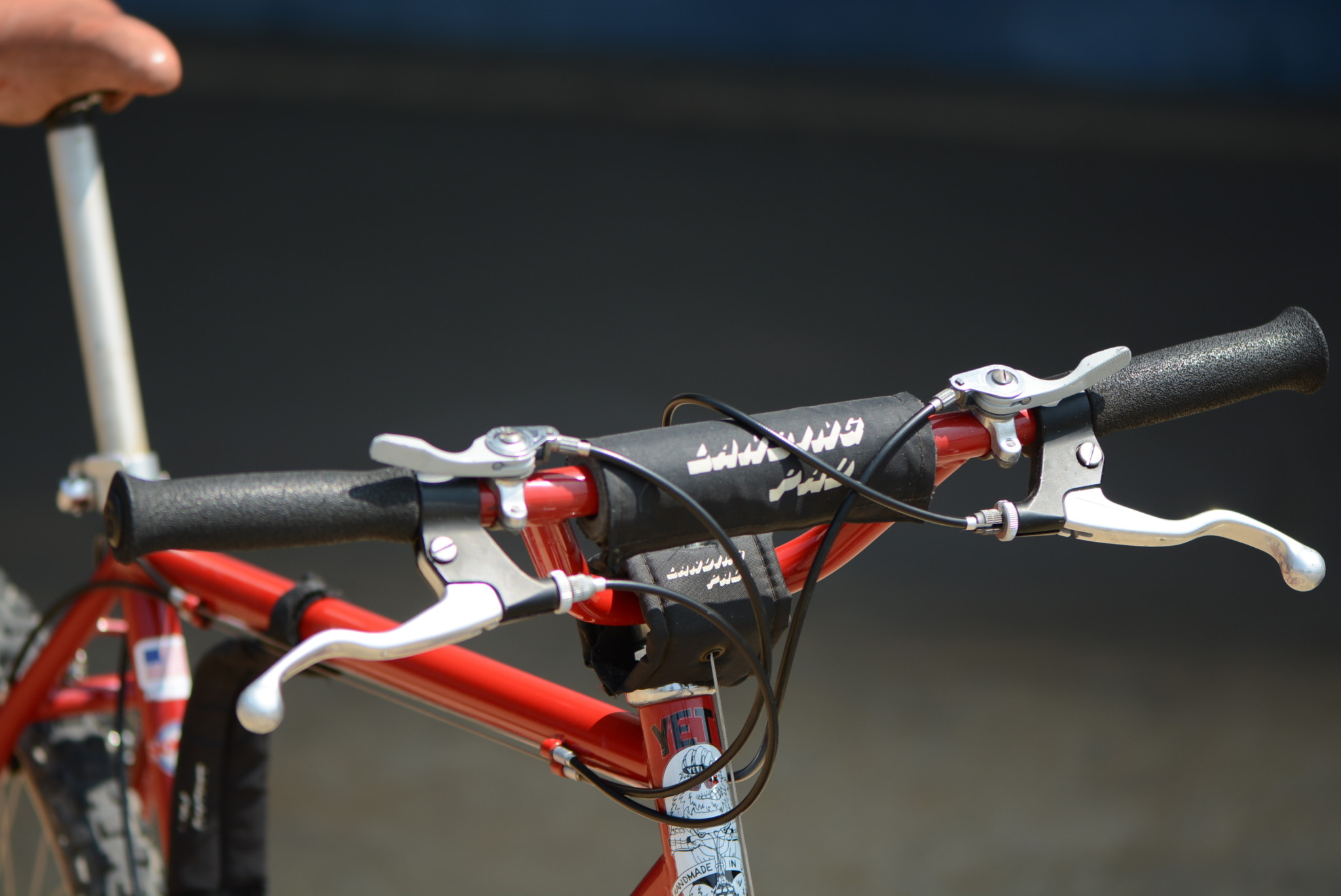 I wish this bike was a bit bigger so I could ride it a bit more. As it is I can get around on it fine, but it’s just not ideal. I do have another very early Yeti that I can ride and for the most part they are very similar. The later bike has much better components compared to this one, so it’s all around a better bike.
I have to imagine that when this bike and the subsequent Yetis started hitting the trails it caused a decent sensation in the community. These bikes were very different than the models coming out of the Marin area and I think really contributed to the development of what eventually became known as NORBA geometry. The quick handling, steeper angles, beefy fork and shorter wheelbase made for a very agile bike which still climbed efficiently and was still pretty well suited for longer rides. At 29.7lbs this bike is no lightweight (a full 2lbs heavier than my larger 87 FRO), but somehow the weight isn’t obvious when on the trail. I have to imagine that the bars and stem contribute to this heft and were some of the first parts removed from Russ’ race bike and replaced with a Cook Bros bar/stem package.