Love it or hate it, this frame has loads of character.

It wasn’t enough for Richard Cunningham and the crew at Mantis to create one of the more unique frame designs of the 80s with the X-frame, but they decided to up the ante by incorporating their elevated chainstay concept and create the Valkyrie.

The Valkyrie or the Valkyrie EC as some refer to it became on the of the more iconic mountain bikes concepts and essentially sparked the elevated chainstay revolution, however brief it may have ended up. The original X frame was first built in 1986/87 and as best as I can surmise 15 or so non-elevated frames were made. Richard put to torch to each one personally, and they were essentially his magnum opus. The elevated Valkyrie came out in 1989 and remained the only steel Mantis available until 1992-93 when Richard sold the company. Although I have not dug too deeply into the build quantiles of the elevated version it seems that many more were made, and I’d put forward a figure of 50 or so frames as a possible build total.

Before I get into it, here are some interesting figures you may want to think about before you really judge the bike. First, an average mountain bike is made of approximately 10 pieces of tubing (HT, ST, DT, TT, stays, BB shell and maybe a brake bridge) – the Valkyrie has 13 plus all the little braze ones. Then there are the sheer number of welded junctions at 28 (not counting the cable guides/stops and the compound joints in a few places) vs the normal 15 or so… all of this means that a lot of work went into this bike!! 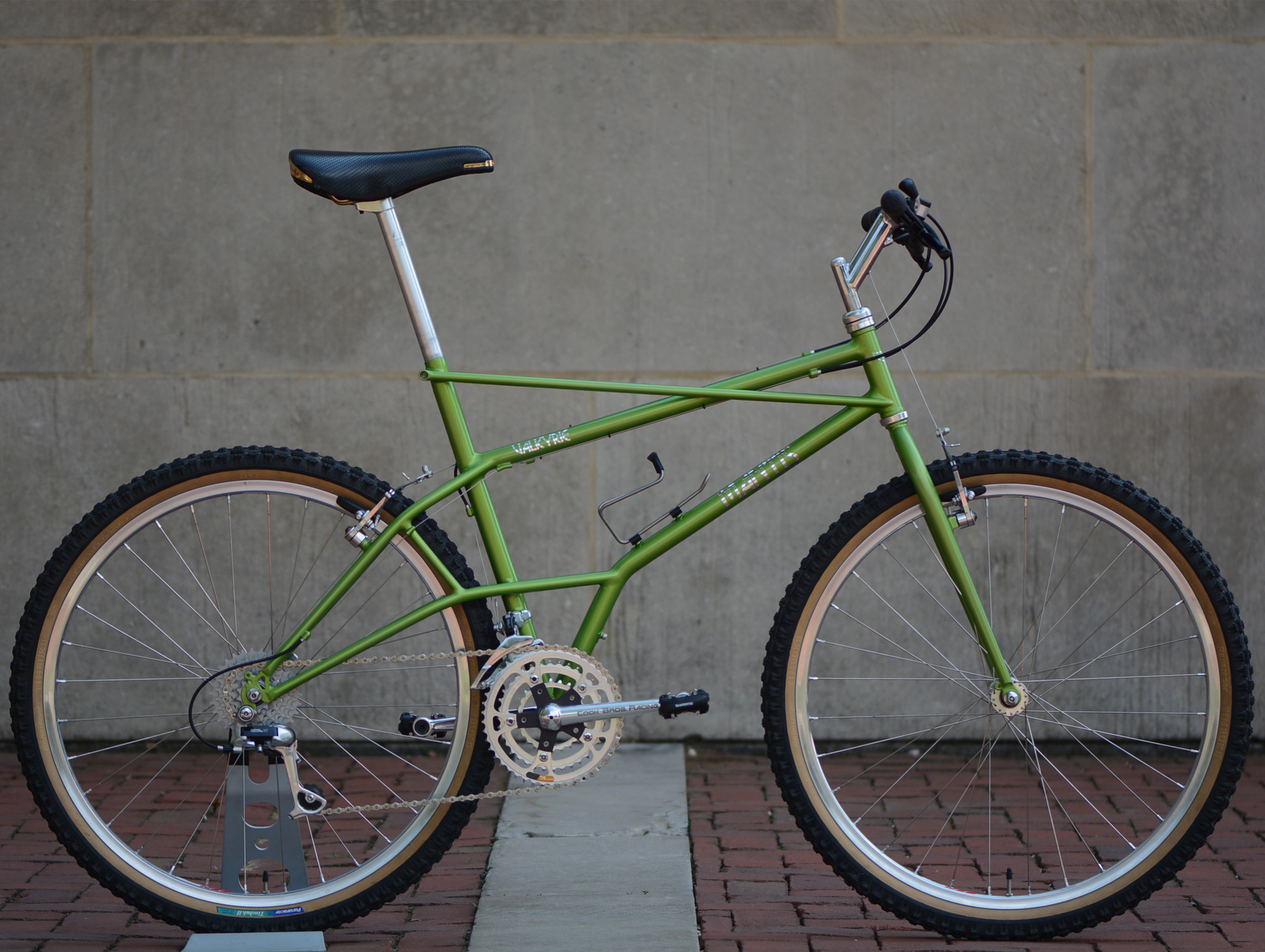 I’ve been working on this bike since around 2014 when I bought the frame on eBay in a rather sorry state. Basically only the frame was salvageable as the rest of the components including key things like the stem and fork were not correct. I was able to source a fork by sacrificing a Mantis XCR which made do with a Rock Shox RS-1. I was lucky to find an original Mantis stem down the road and so the game was on. 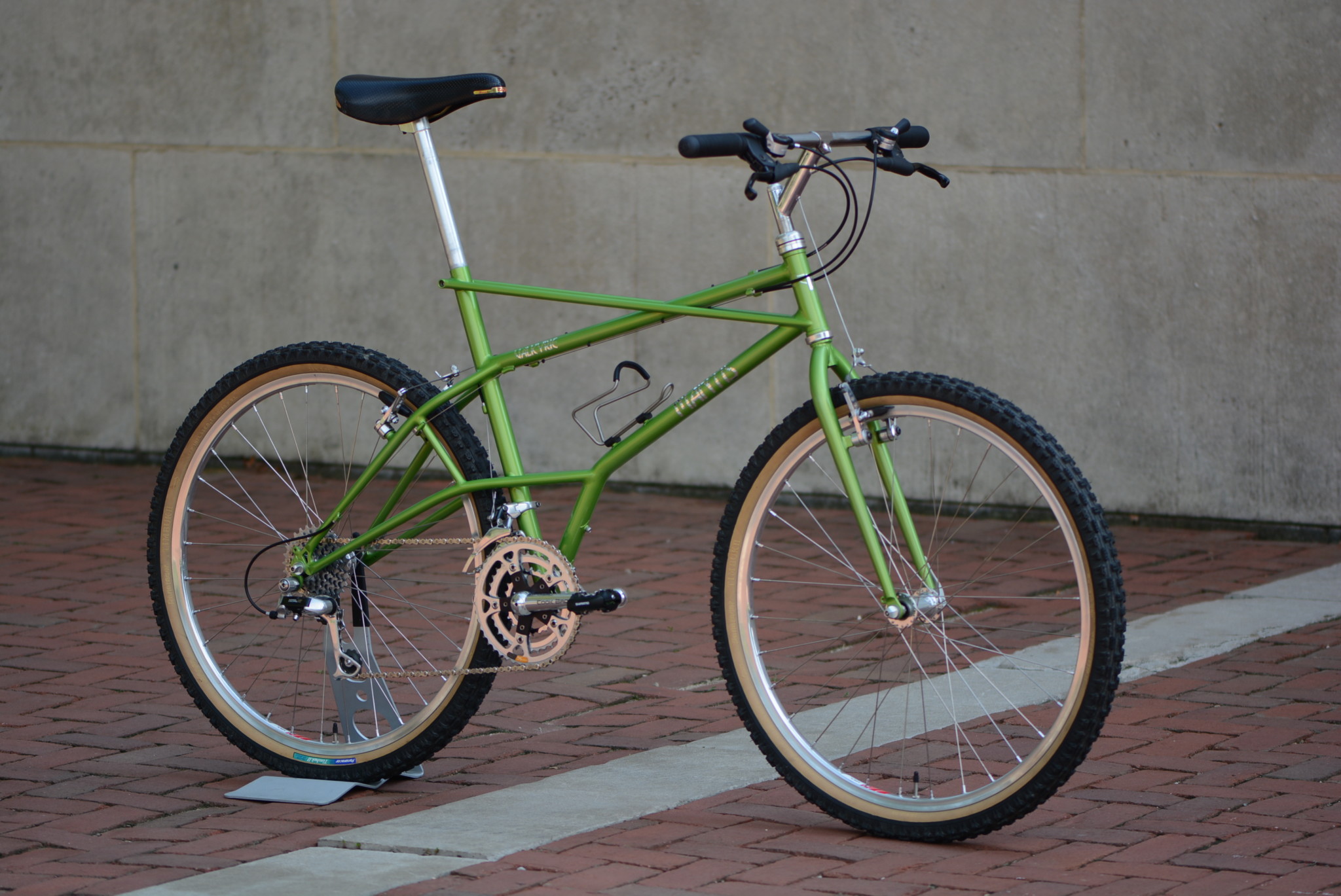 For the build I decided to go with a mix of American Classic, Shimano XT and featuring Cook Bros cranks and Grafton Speed Controller brakes. I have never used AC components and have always liked their quality and aesthetics. I always thought that the later elevated Valkyries were ideal candidates for a high end build and so rather than go for the typical heavy on the anodising Ringle/Grafton build I opted for a more subtle but still somewhat edgy build. About the only thing I didn’t use from AC were their quick releases as they were mostly painted black and I was unable to find a nice enough pair that when stripped would polish up nicely. So, that remains as something to correct in the future. 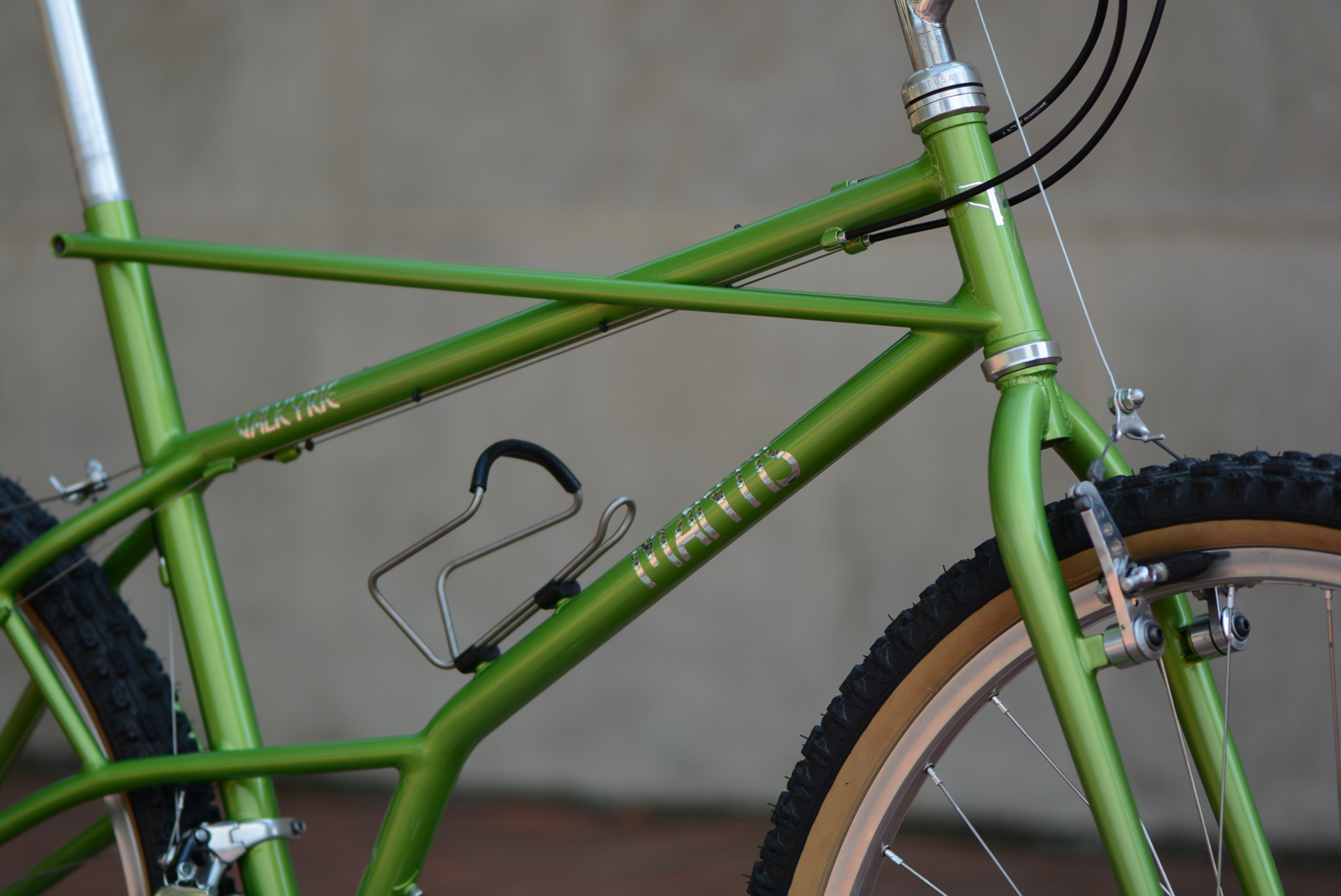 There are so many details to talk about on this bike. Starting with the overall frame construction there are two things that I think people notice first. One is of course the elevated chainstay, which for many people today is quite unique. Those of use who were around in the late 80s and 90s instantly recognise it as a has been design trend, but still interesting. Personally I think the regular X-frame was perfect as it was and I feel that incorporating the EC design into it was the wrong decision. It makes the bike heavier, much much more flexy, prone to failure at the seat tube joint and lastly and maybe most on the nose for me it makes an otherwise gorgeous bike look like something from a sci-fi movie. It just looks a bit too edgy and I think that is in stark contrast to the quality of craftsman ship that went into making it. I don’t know, it’s just too much for me. 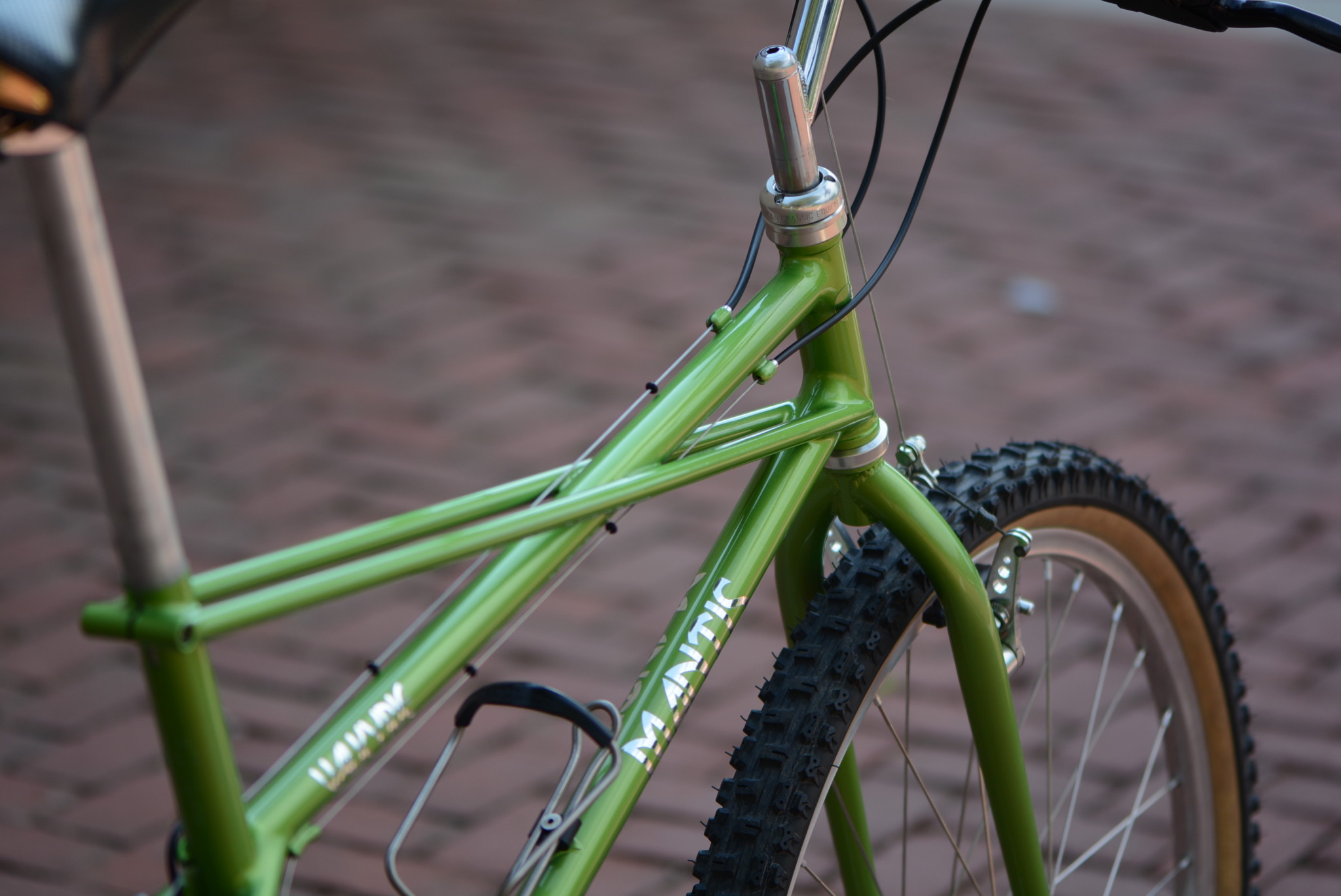 The second major talking point is of course the main triangle with its unique twin lateral cross members. The design concept here was to use smaller diameter and therefore lighter tubing and achieve the same or even greater level of overall frame strength. RC has said in the past that he got this idea after doing some frame strength testing for Gary Fisher and they ended up testing an old Schwinn frame and realised that it was incredibly strong compared to the light weight steel Fisher frames of the time. 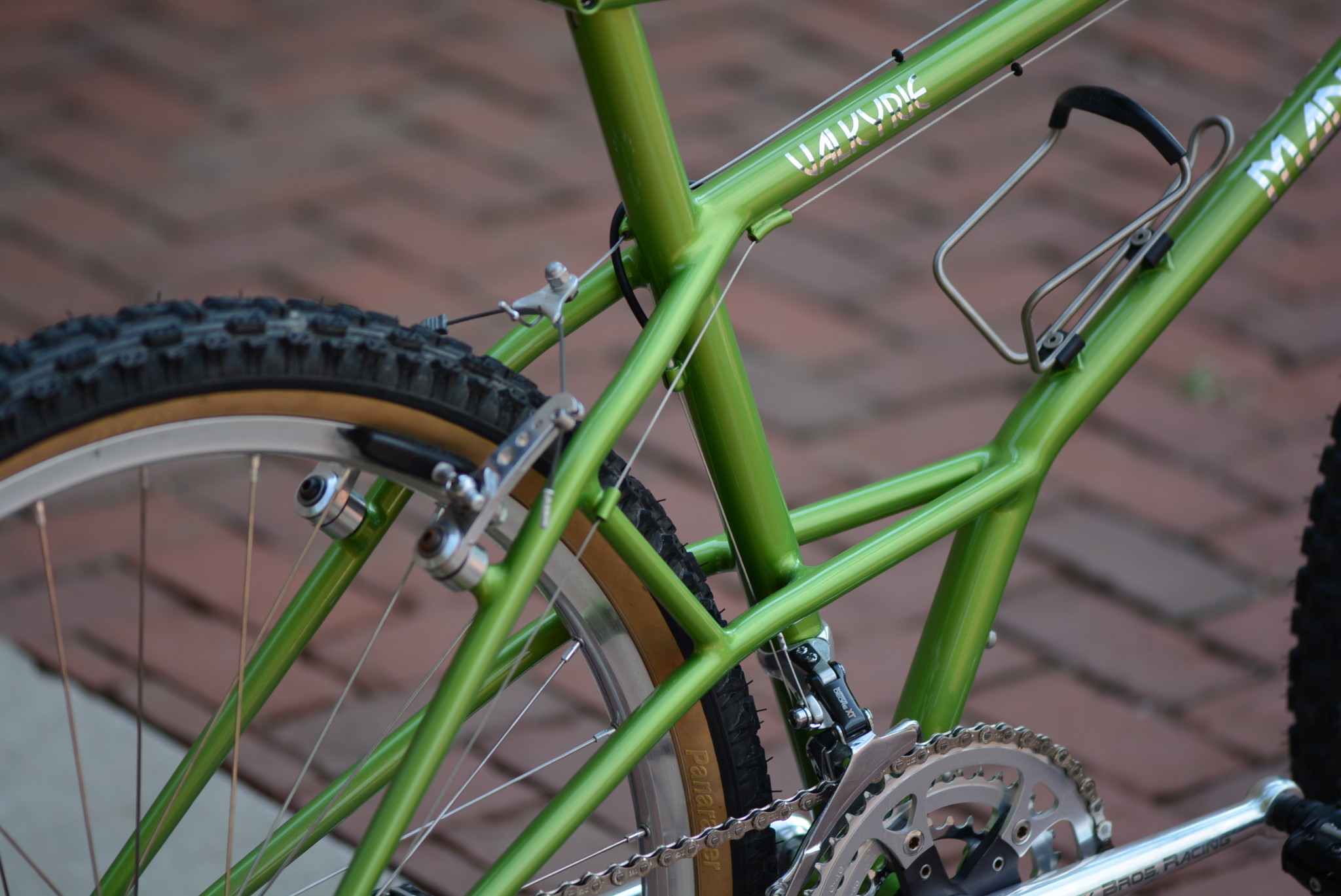 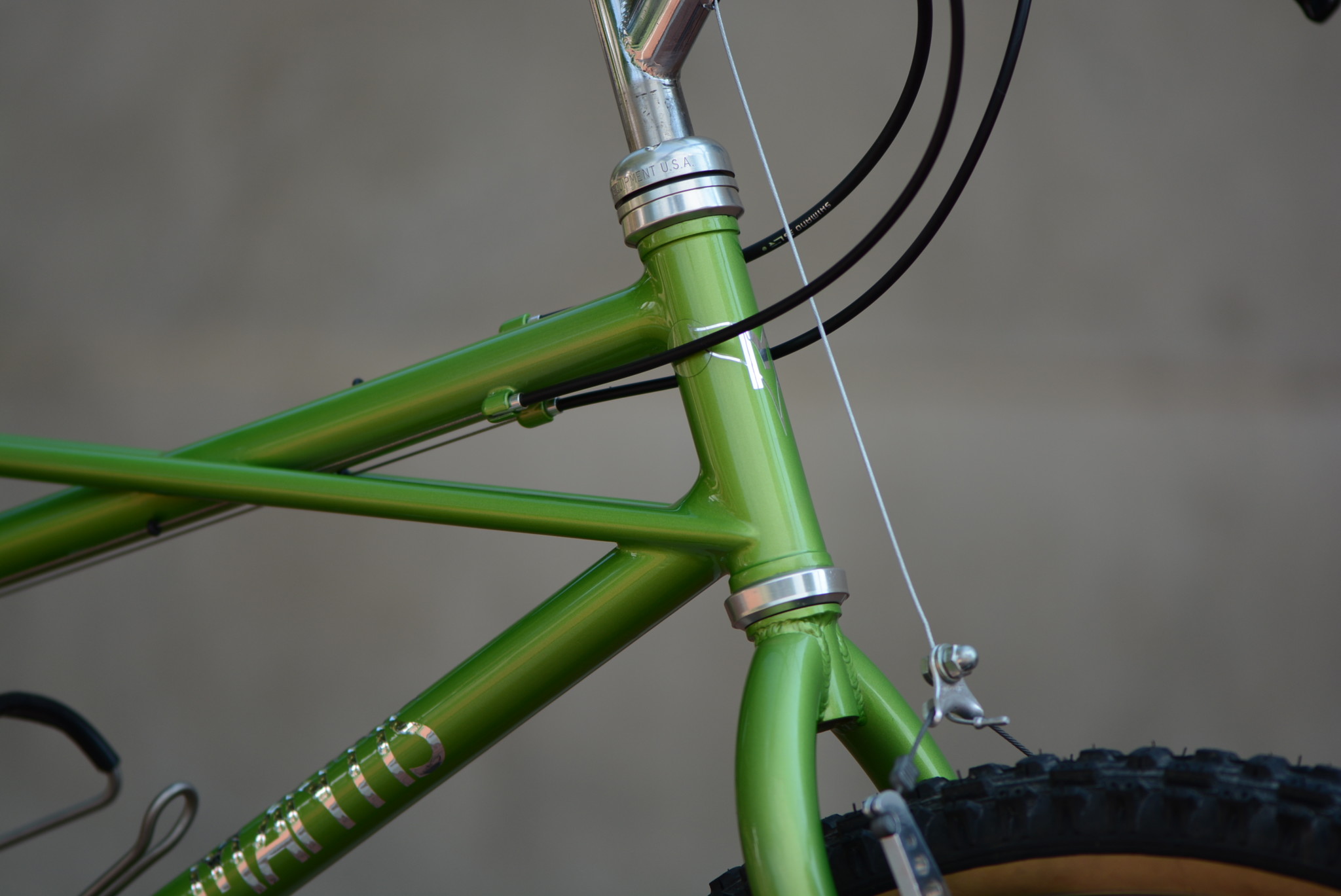 This being a late product Valkyrie the ends of the laterals have smooth shaped ends as opposed to the the earlier scalloped ends featured on the early X’s. Personally I prefer the older versions (see my old 87 X frame) but whichever one you like either design makes for a wonderfully intricate headtube junction with the downtube. 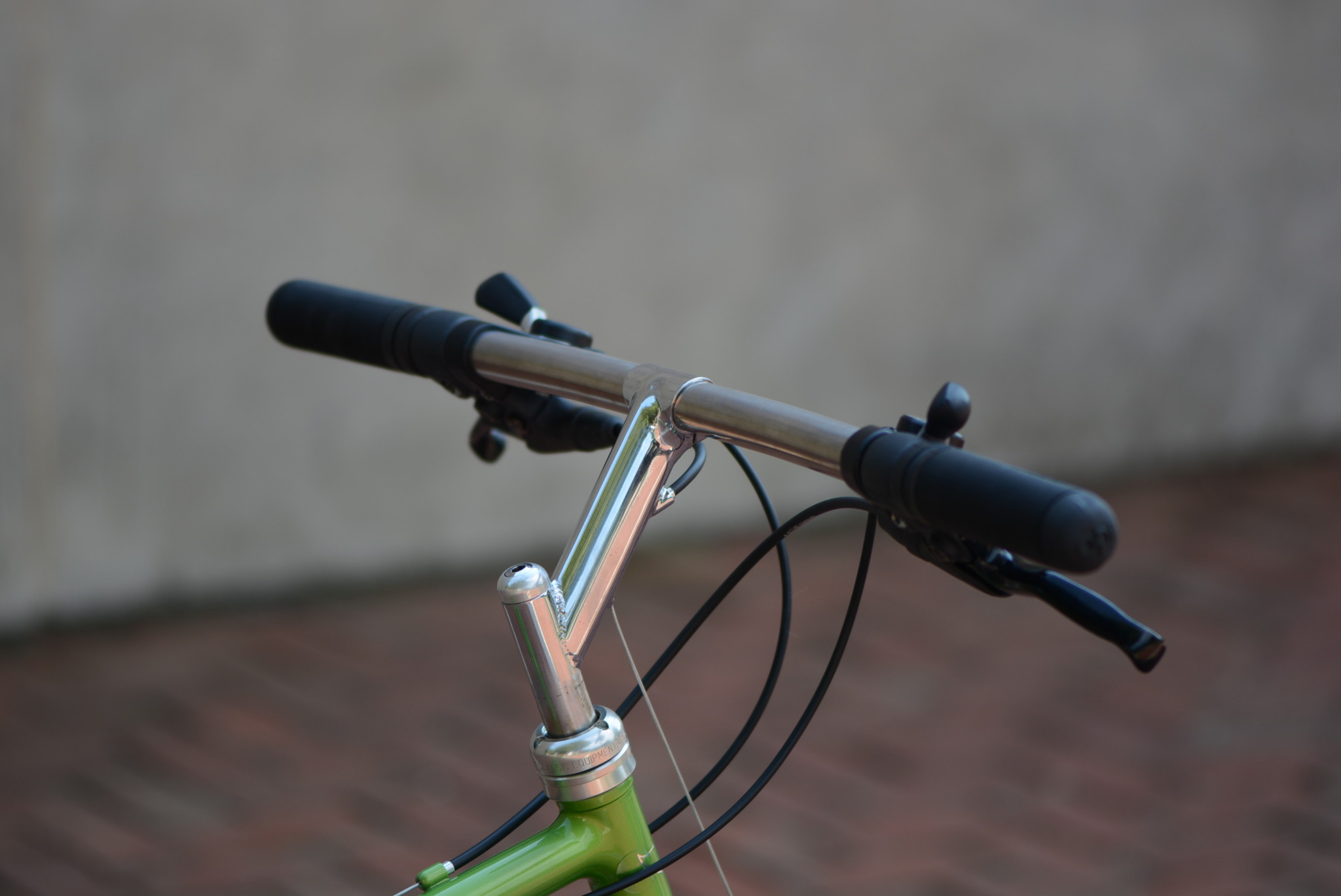 The Mantis stem is a beautiful design. The ovalised section of the stem creates a strong joint at the quill portion and the fillet brazed junction with the handlebar clamp puts just the right amount of flair in a highly visible and less stressing joint. I really enjoy the mix of TIG and FBd joints on this bike and the thought that went into the choice between outright strength and the aesthetics. The internal brake cable routing is clean and results in a fairly smooth cable action. Under most circumstances I feel that the later Mantis bikes are best served with an aftermarket stem as RC stopped making these stems around 88-89, but I also really like the way it looks on the bike and have seen original elevated Valkyries equipped with the stems so I feel it’s the perfect choice for this bike. 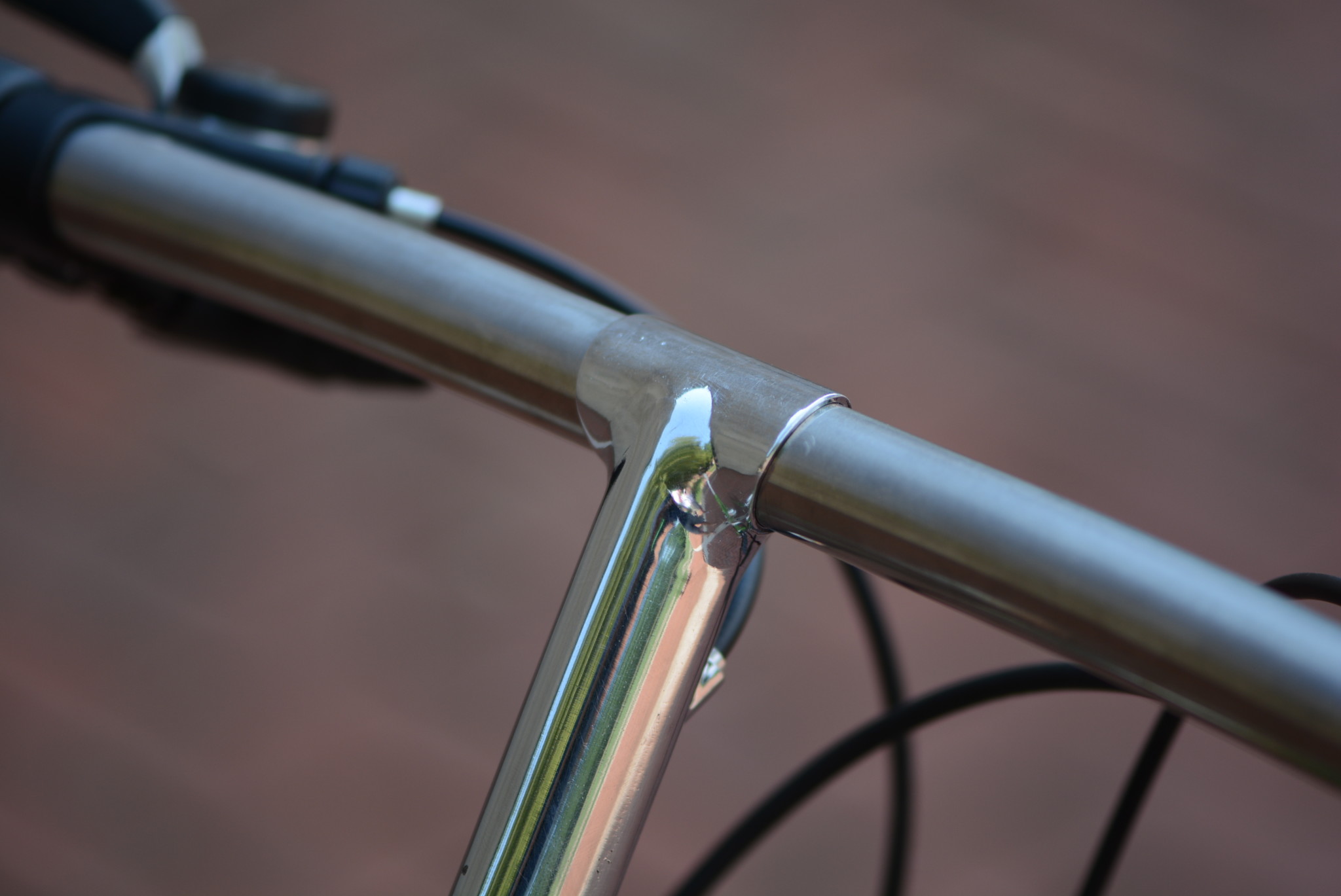 A Little more detail of the handlebar clamp transition. The little ridge on the centerline is reminiscent of the filed ridge on the early fillet brazed XCRs. 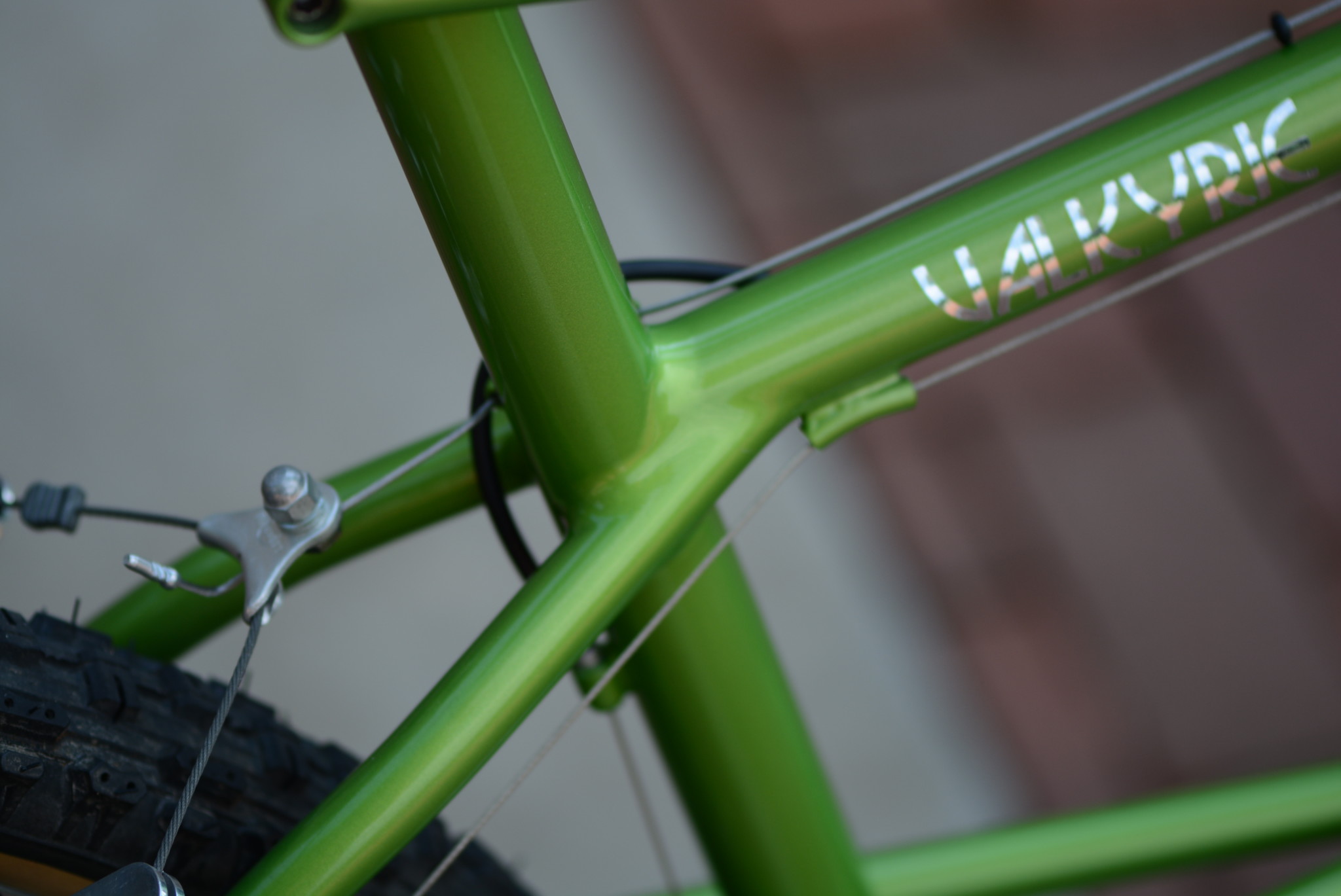 RC has said before that he left most of his fillets un filed, however this bike shows very smooth welds all around. So, I’m not sure if he changed his tune in later years or if some other welders did the finishing work resulting in the smooth, flowing fillets found on this and some other later Valkyries. 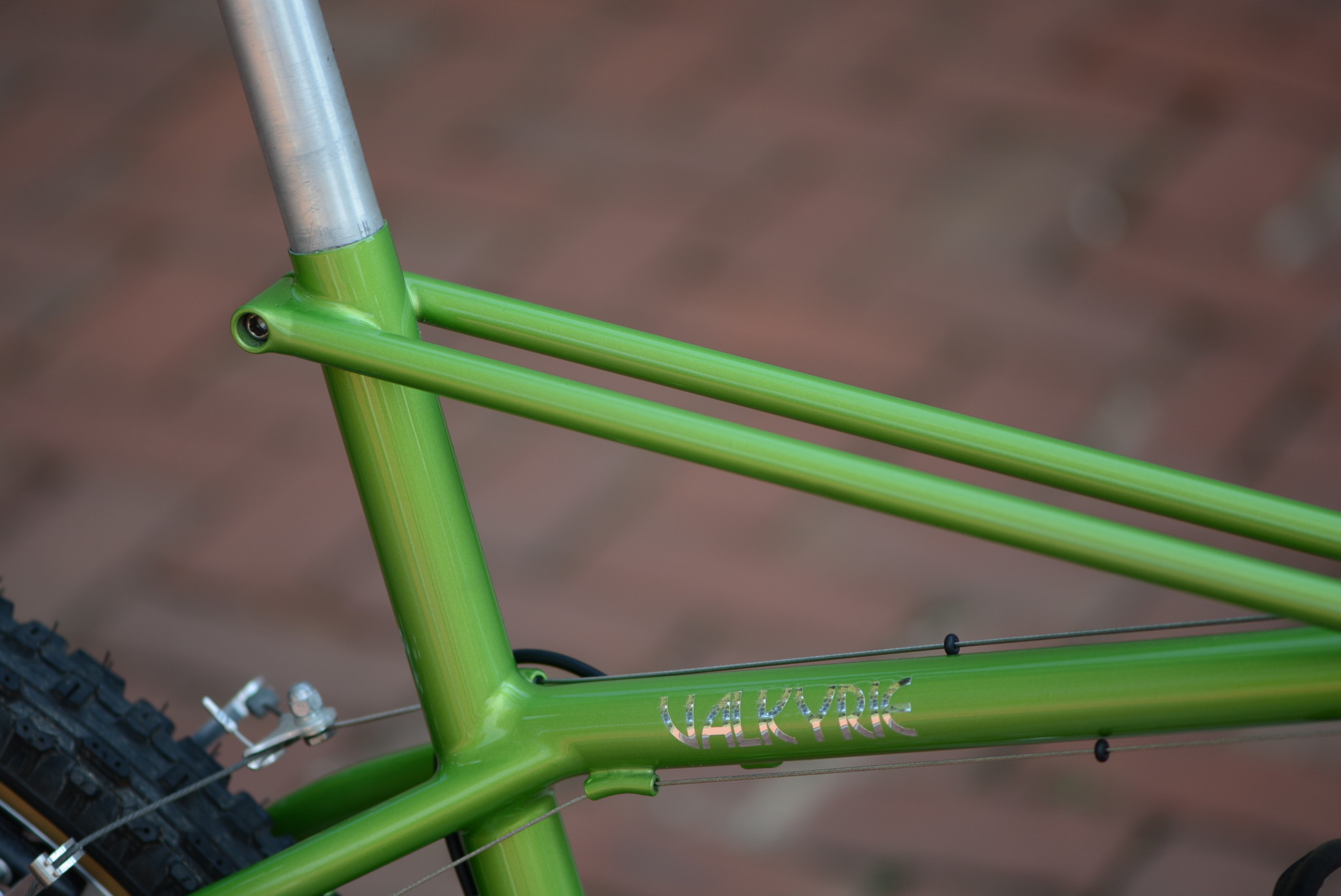 The amount of little guides and cable routing tubes on this bike is borderline funny. In a way they are all interesting little touches that add character. Another way to look at them are fixes required to enable the crazy design of this frame to still support the basic functionality that enables this bike to actually be ridden. 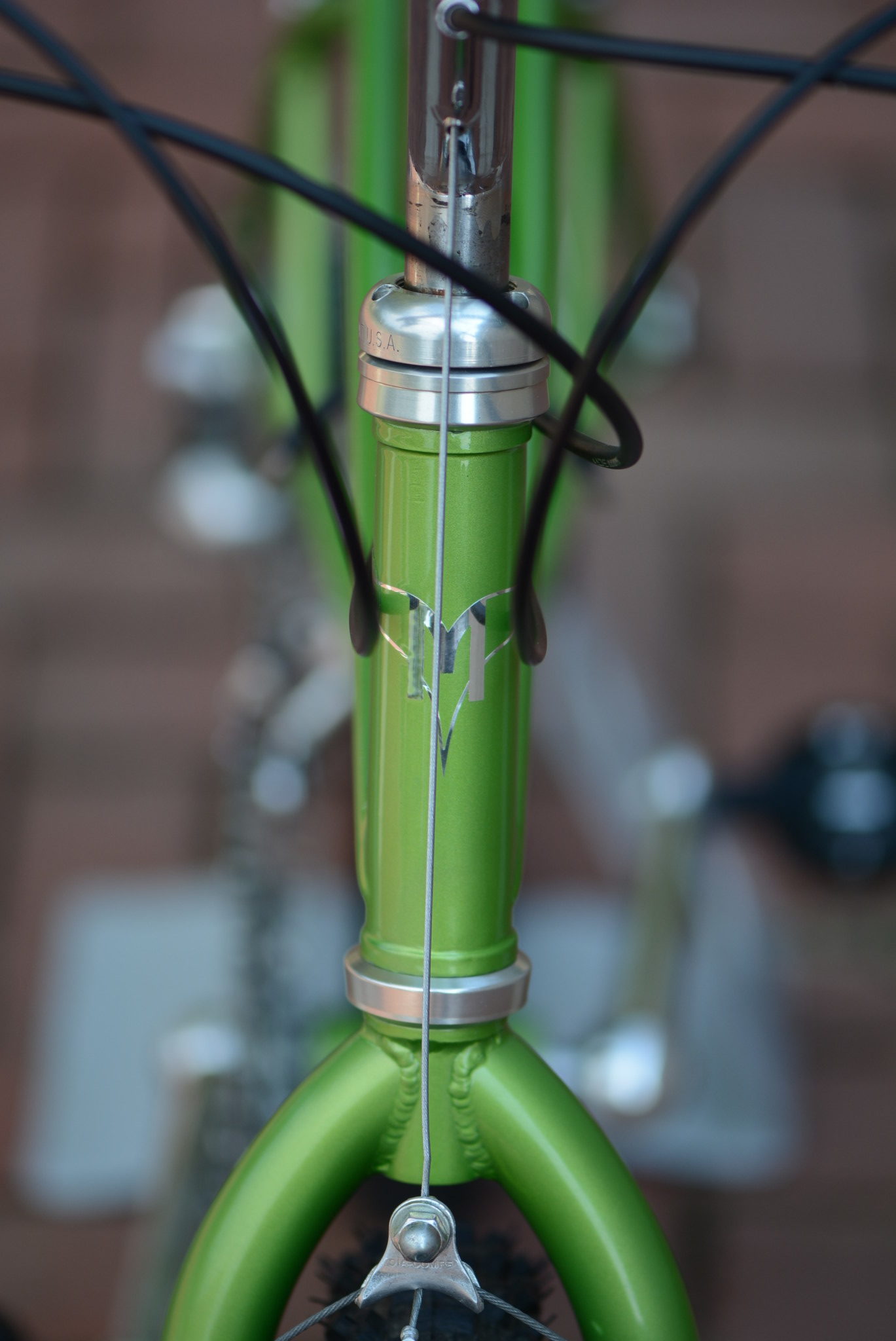 I think it’s interesting that RC put all this work into the welds on the frame only to leave the fork with the relatively rough by comparison TIG welds. He did comment that he used TIG welds where they were needed for strength which I recognise the fork crown requires, but he could have put a light fillet over them to let the fork at least match the frame for aesthetics. 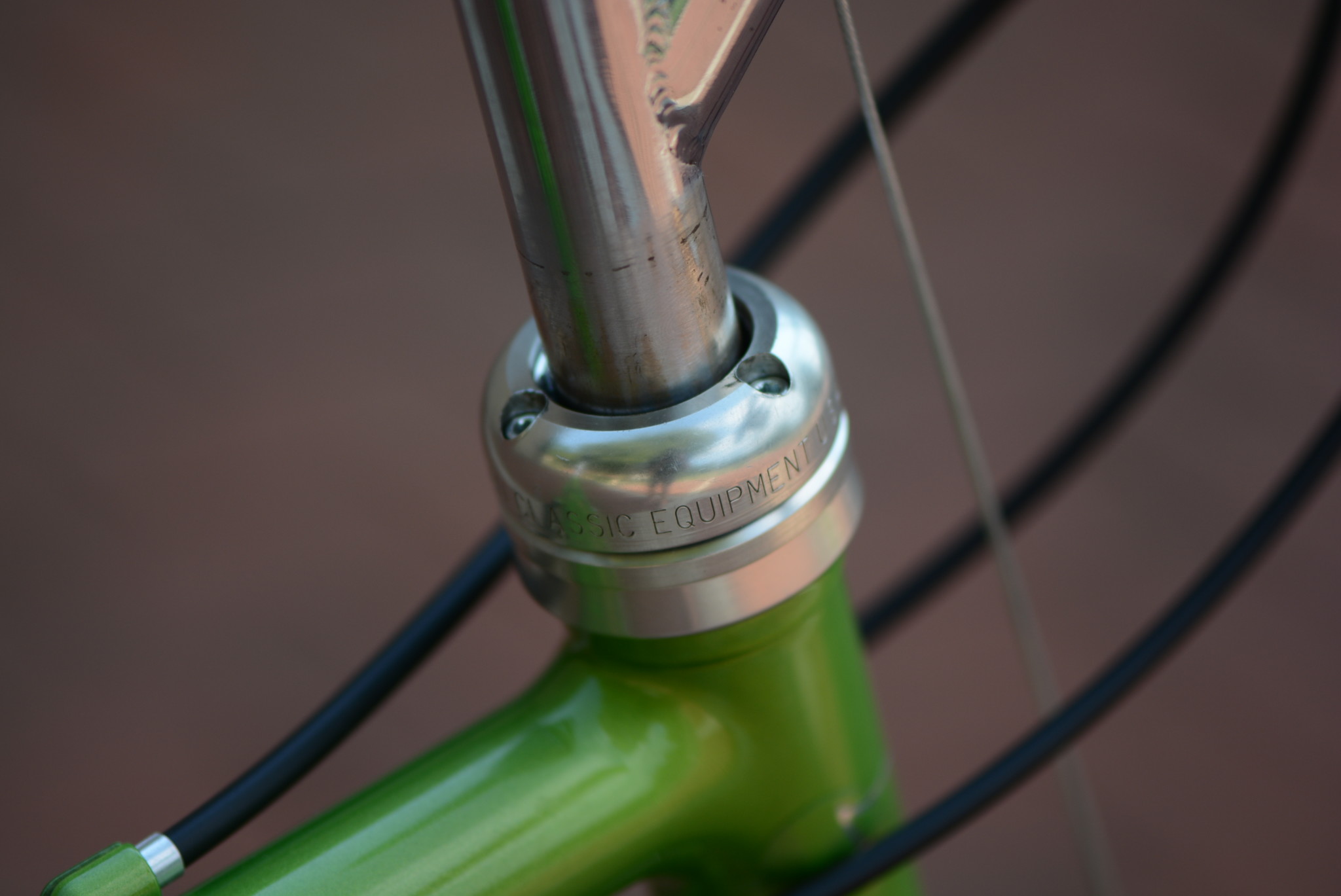 The American Classic headset is one of the more unusual designs, echoing some of the early Mavic designs. The headset eschews classic headset wrenches and I must say is somewhat challenging to install if the threads aren’t perfect. I still really dig it! 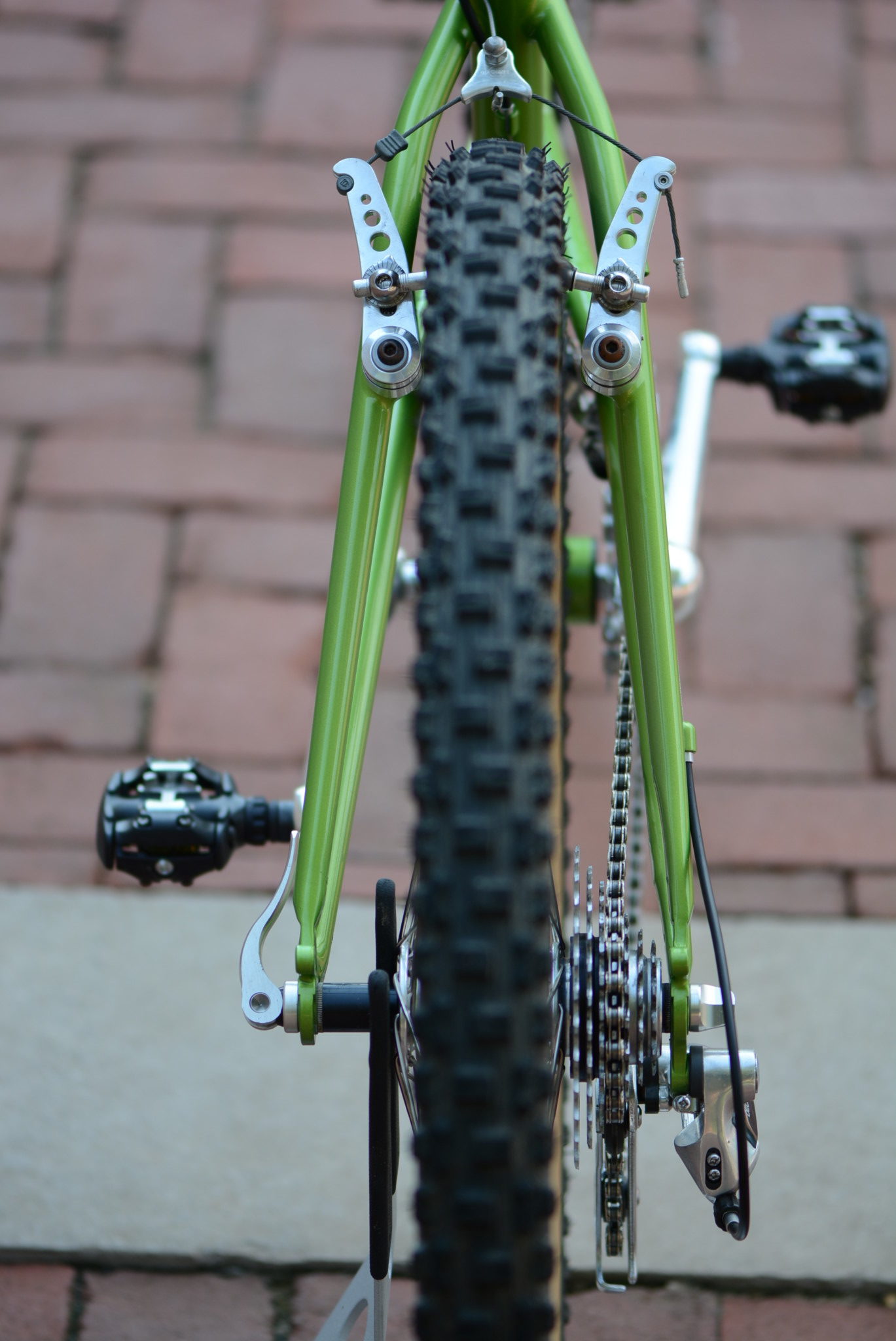 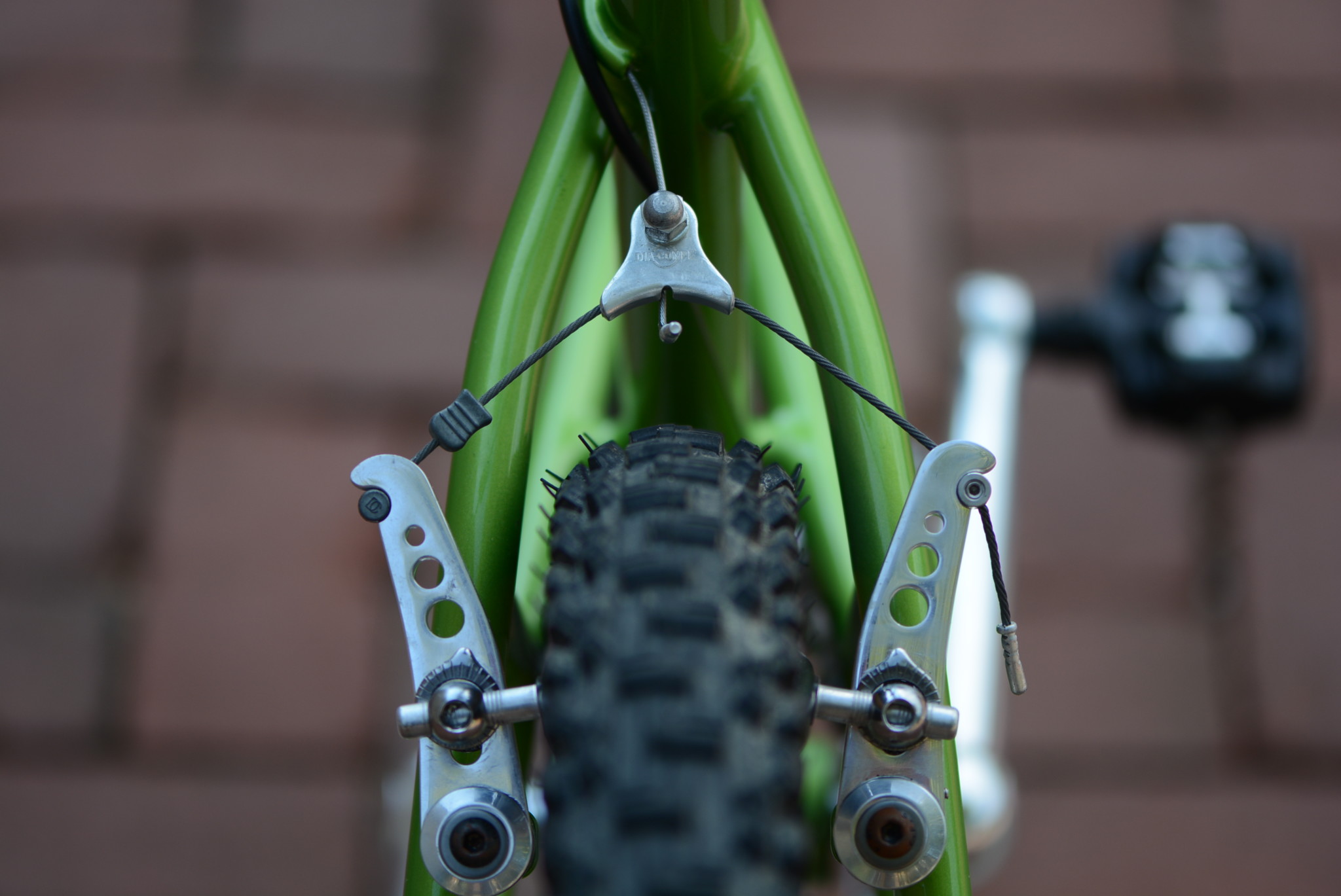 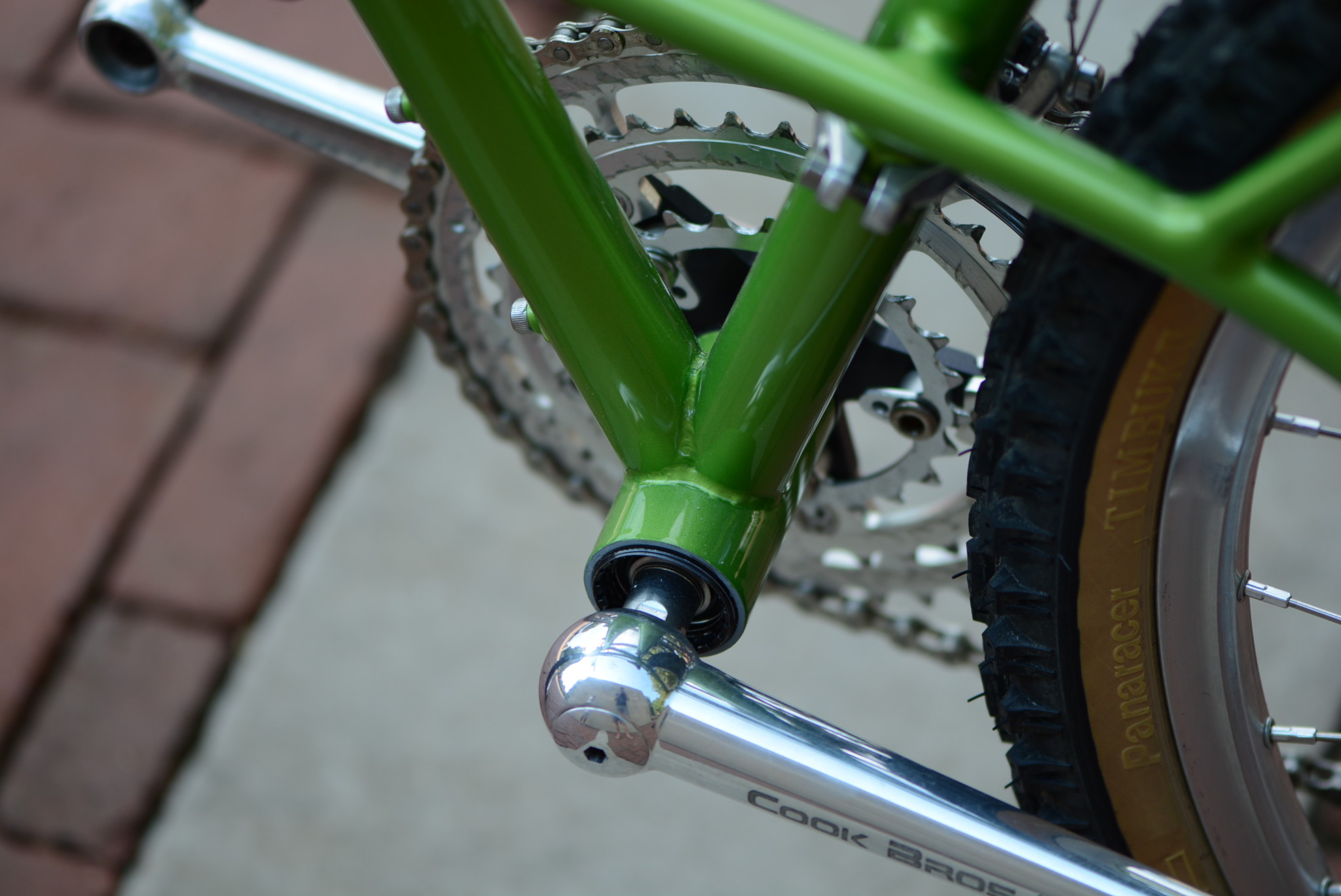 I haven’t ridden this bike, but I’d imagine there to be a fair amount of compliance in the BB shell… 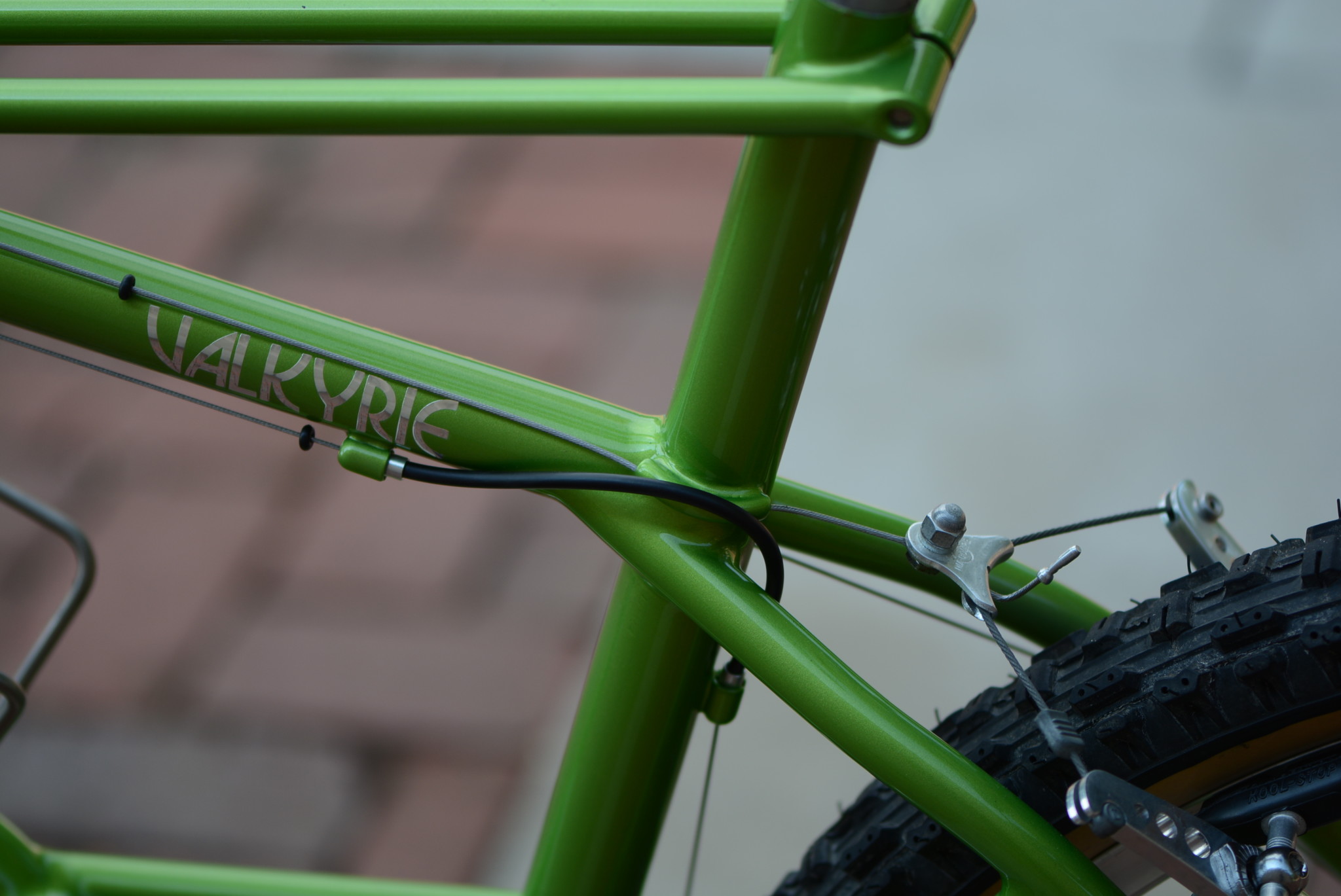 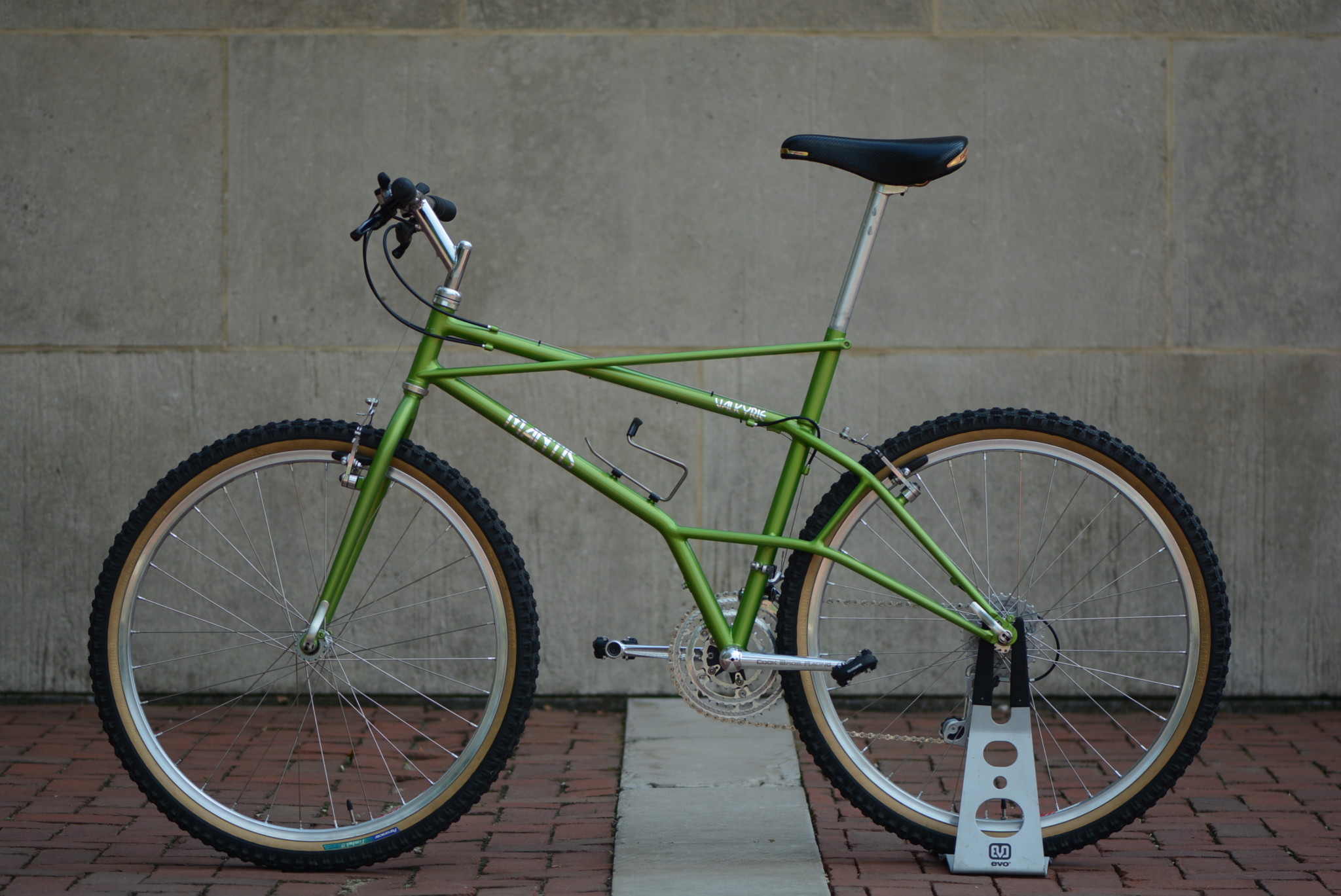 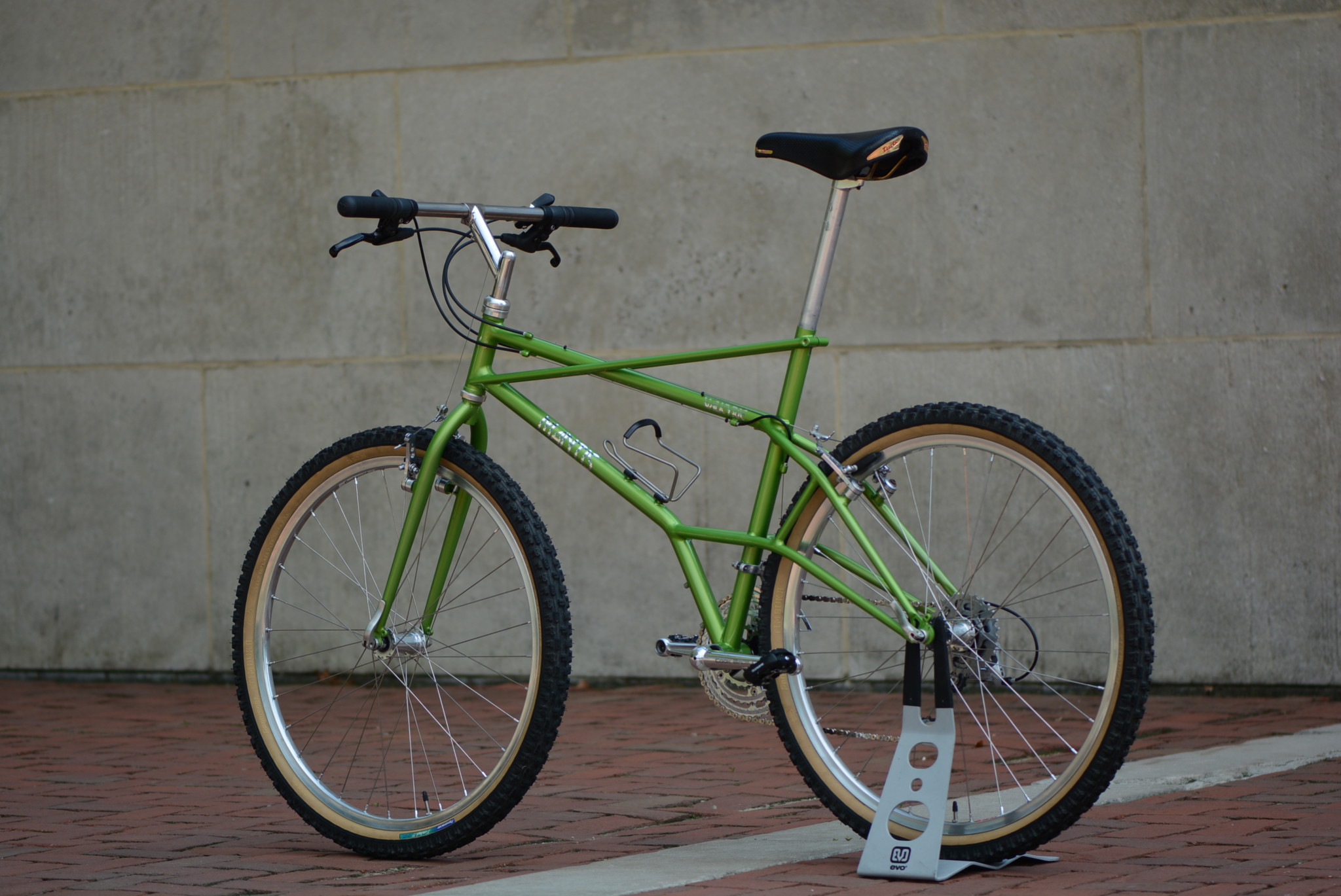 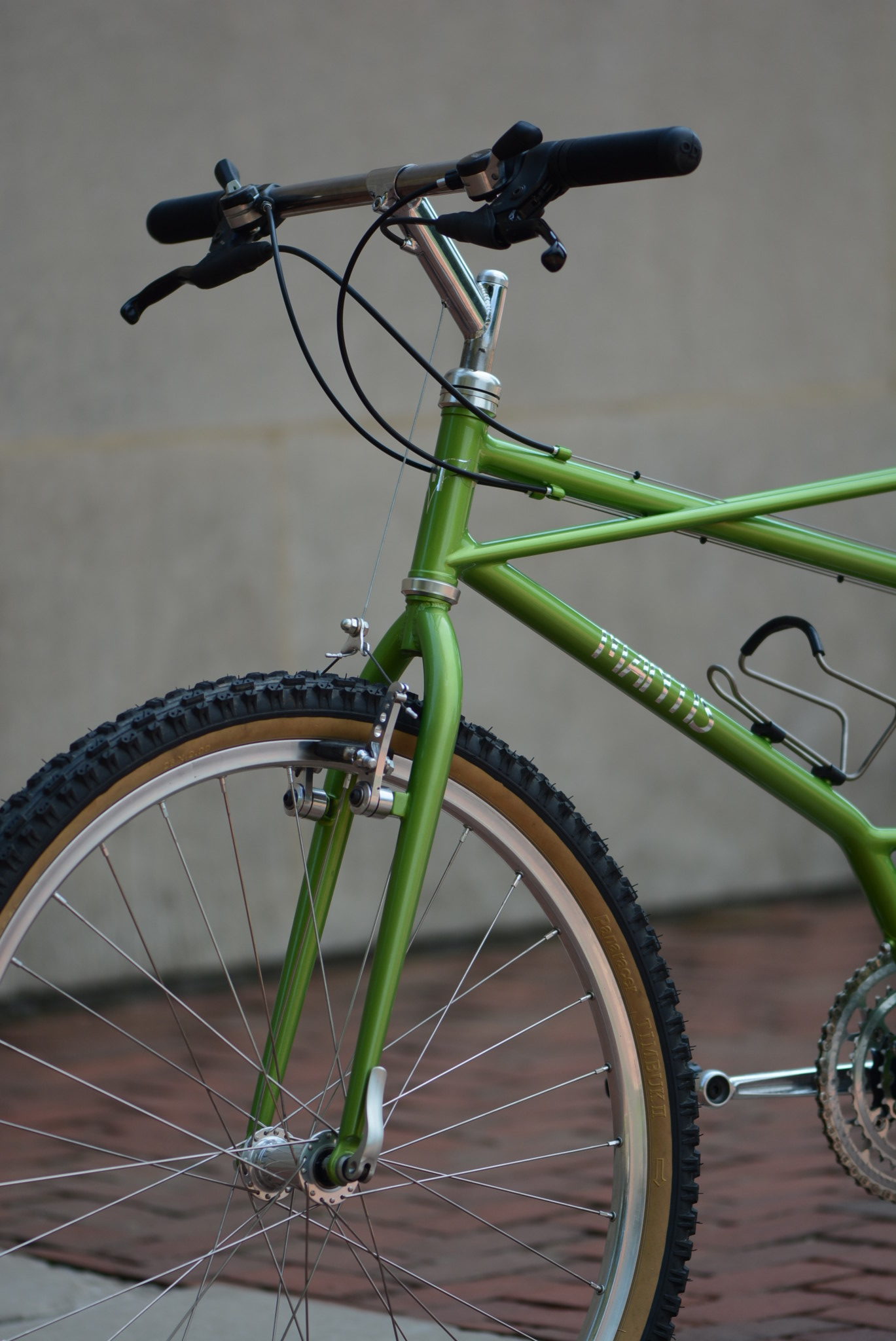 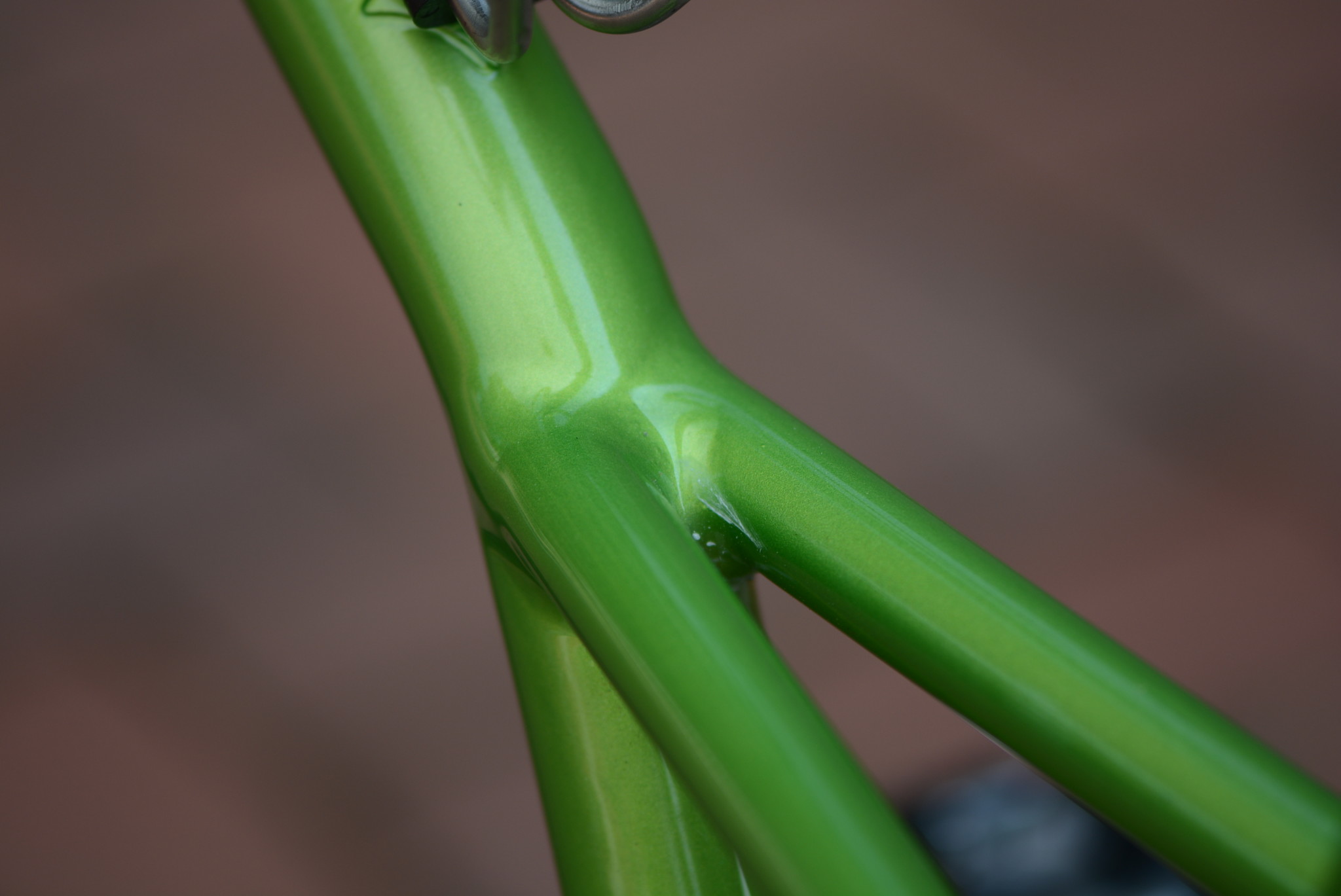 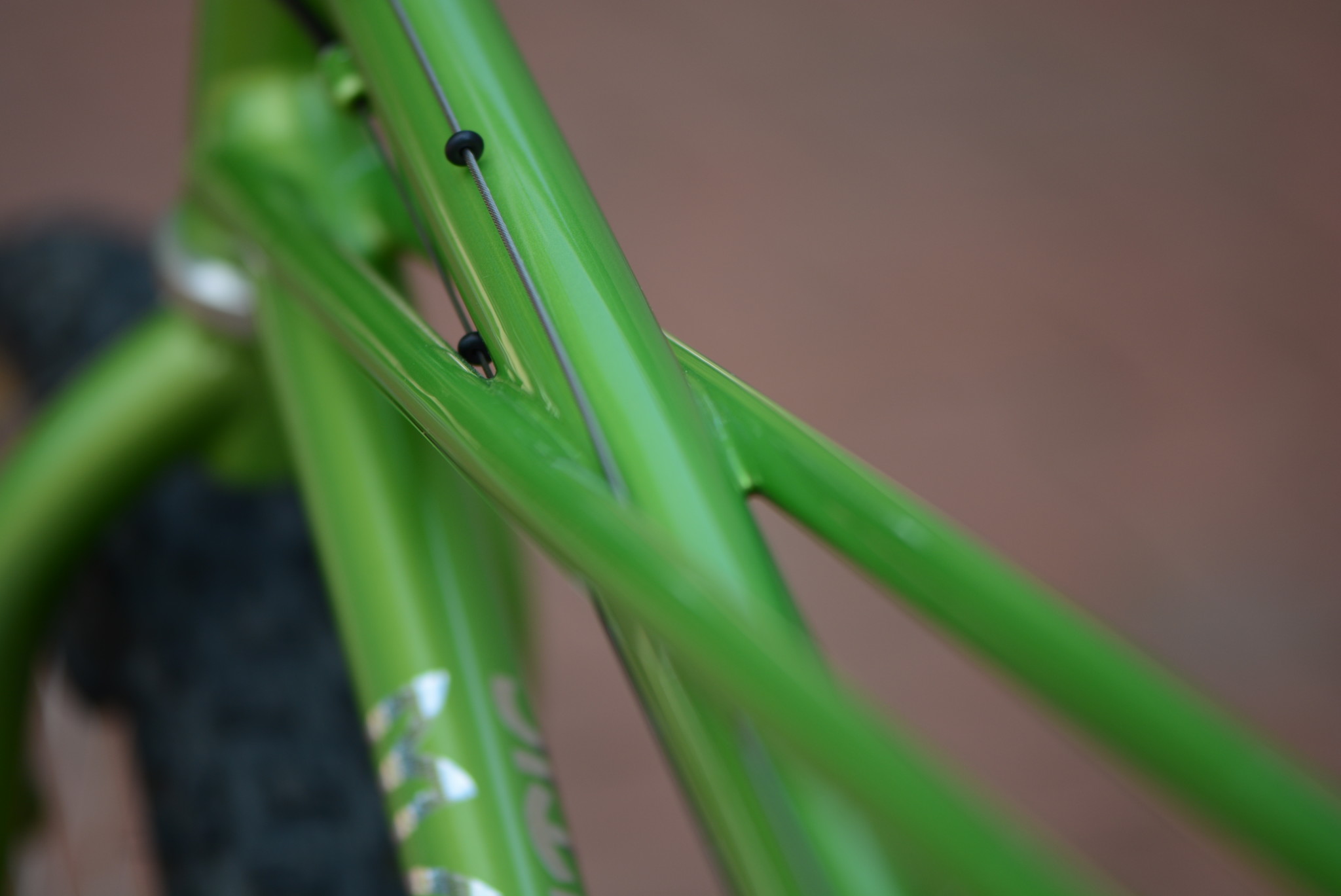 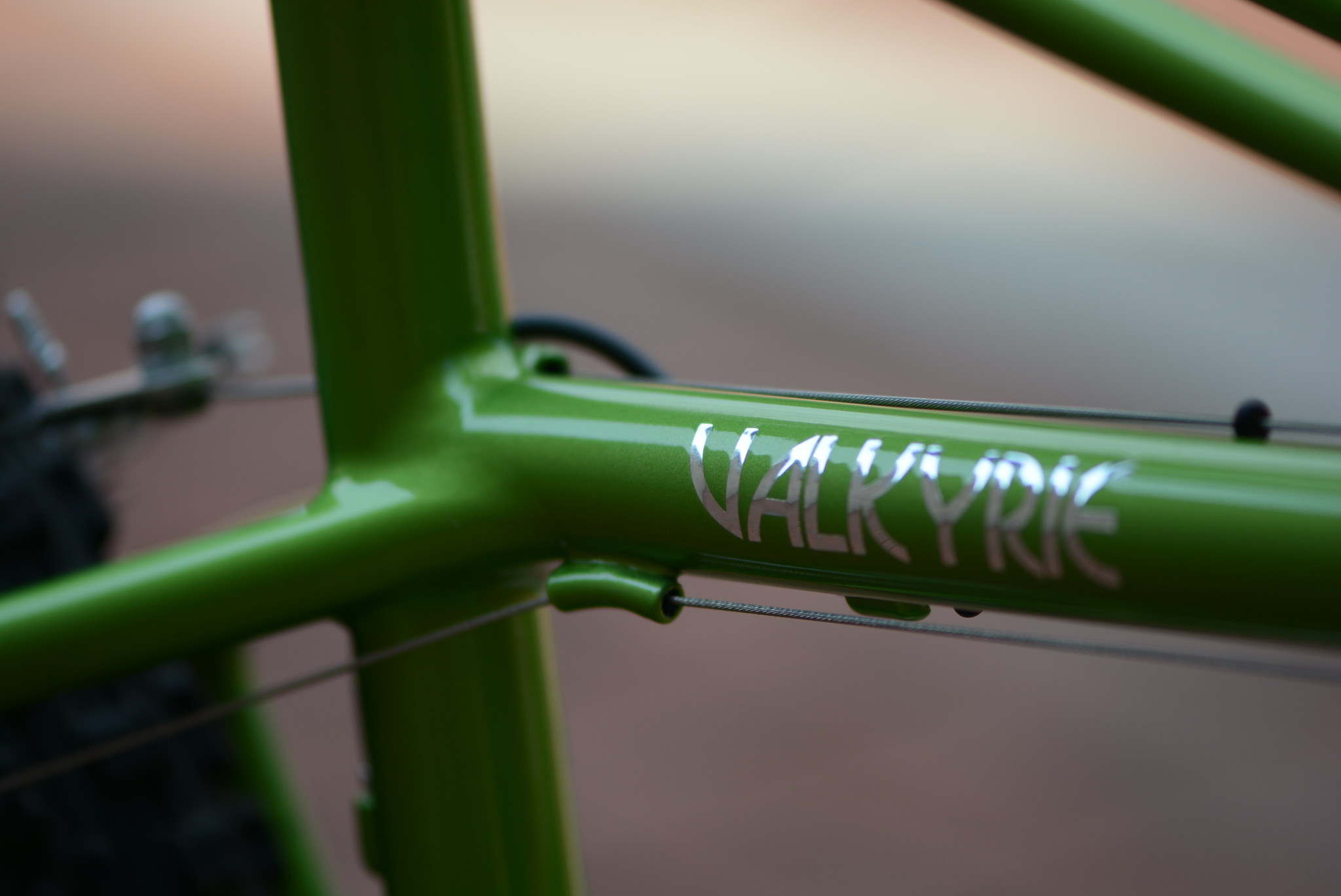 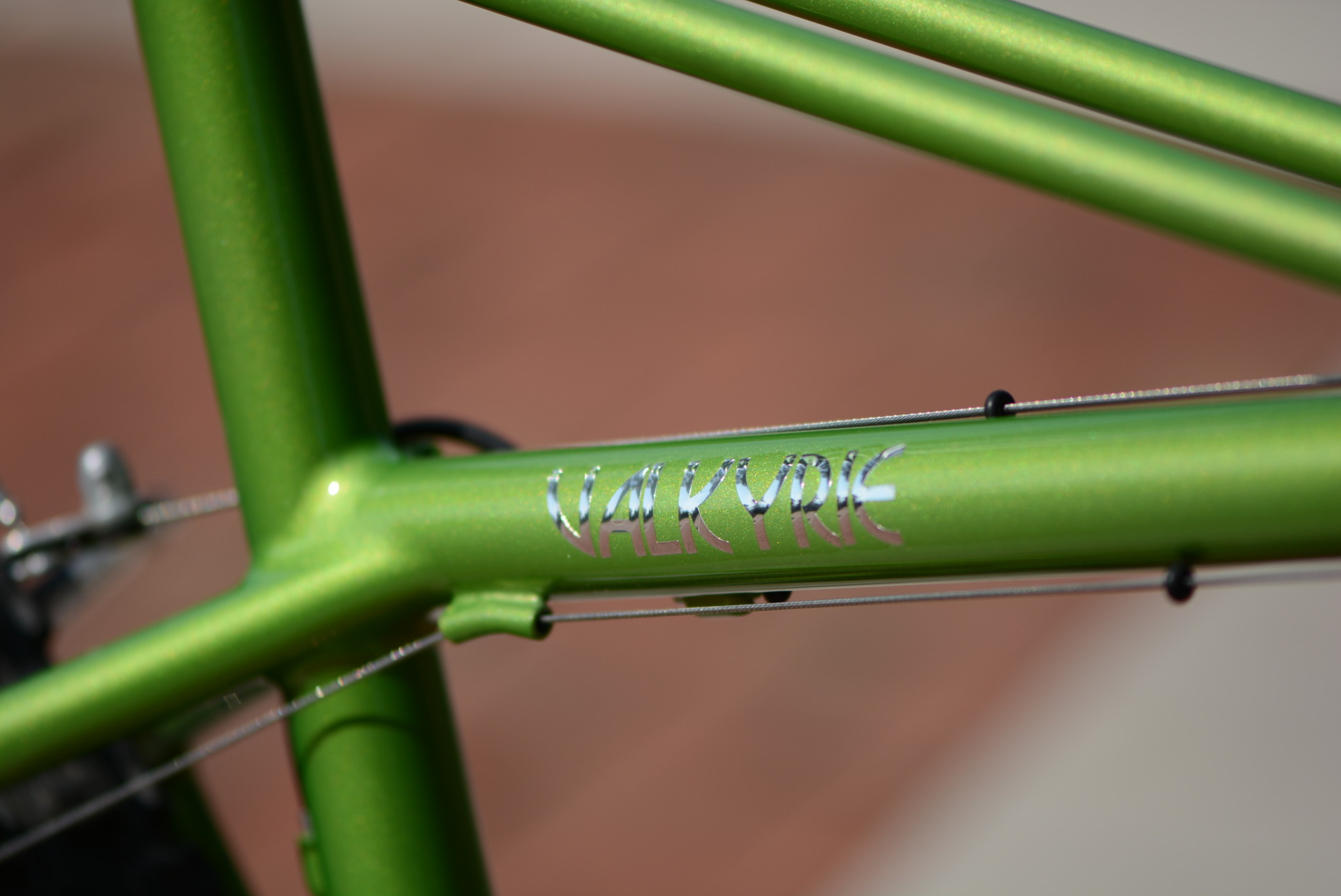 Fun aside. The decals on this bike are actually chrome inlays that were laid down and painted over and then the masks removed. This specific material was originally used on Merckx frames. 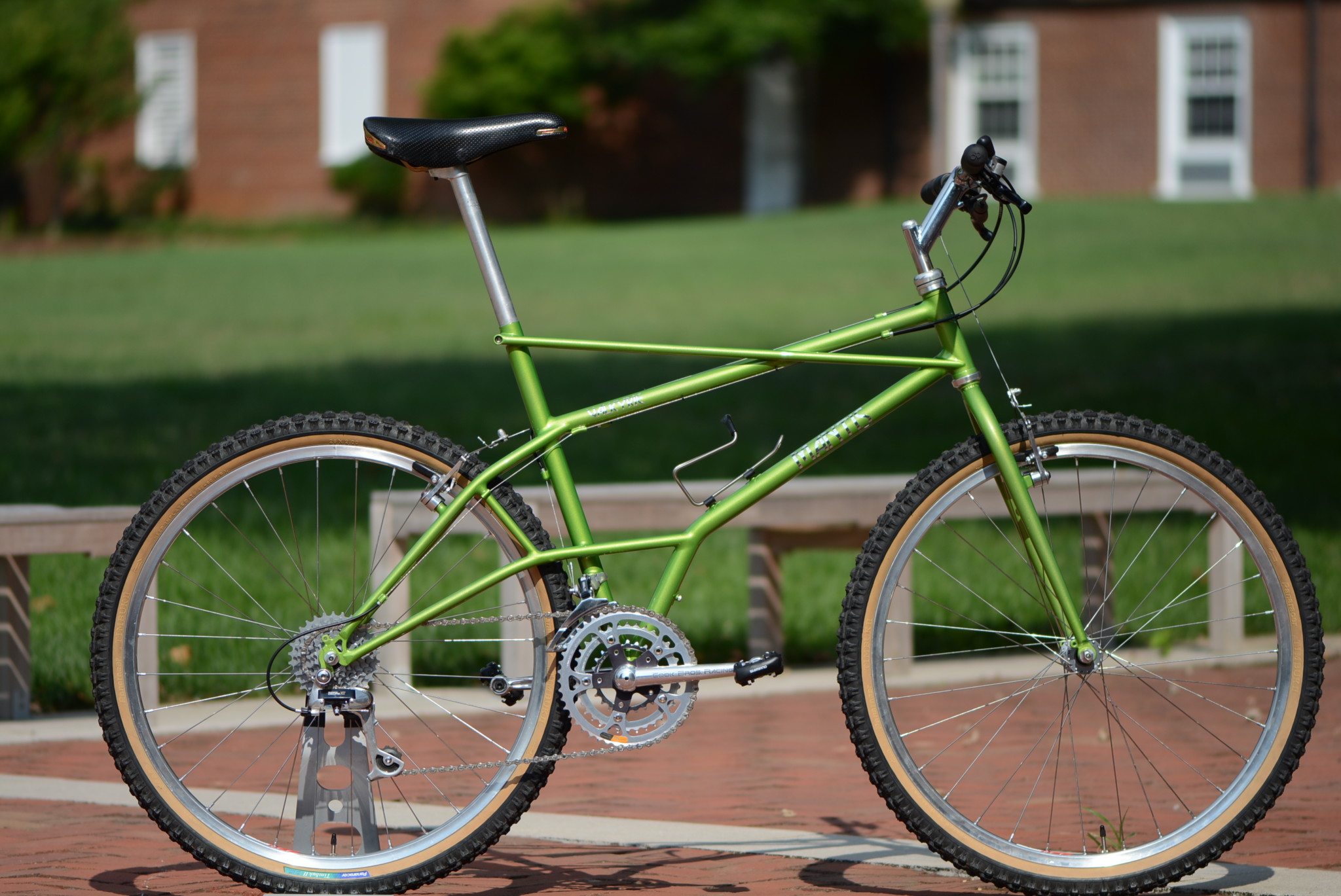 I may be a bit hard on this bike, but it’s a degree of criticism usually resulting from a deep appreciation that can only be achieved by investing several years into a project. The elevated chainstay Valkyrie is a close derivative of one of my all time favourite bikes (the X frame) and to top it off I have spent nearly four years restoring it and building it up resulting in very high expectations. For me the first innovation that resulted in the original X/Valkyrie was the one and I would have left it there. In my opinion that added not only character but was practical and resulted in a fabulous ride. The elevated chainstay modification adds pretty much nothing but complexity. I say this largely based on the learned complexity in building this bike and off of input of others who have some serious saddle time in one (ride review on the non elevated Valkyrie here). Though I have to admit I haven’t known anyone who’s had any significant hours on both, a testament to how rare these bikes are.
So in the end I think this is a rad bike, a crazy outlandish design, executed with a high degree of craftsmanship and flair. It’s a standout design that is sure to get attention anywhere it goes and if you don’t demand the world from it can be a capable mountain bike.