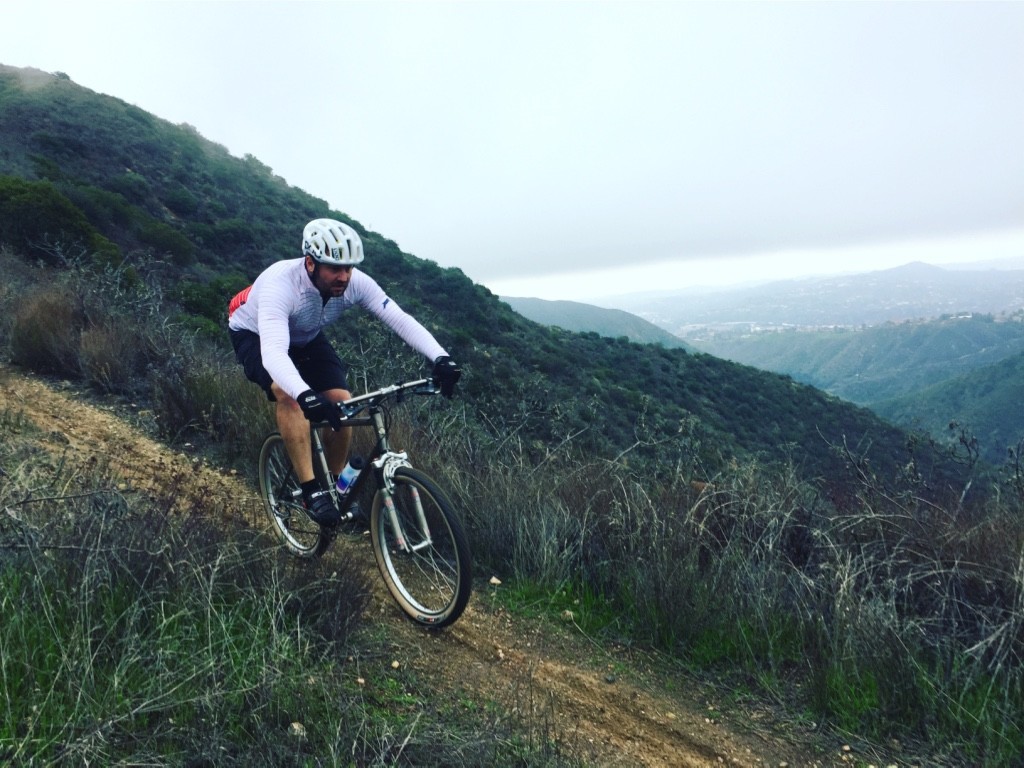 In a way this really shouldn’t come as a surprise. My two favourite bikes are my 89 Merlin and the 92 Cunningham. This Phoenix is essentially a combination of the best qualities of those two bikes with the added benefit (depending on your perspective) of front suspension. Take that and add in one cool front brake and combine it with the fact that this particular bike is the prototype Ti Phoenix and Mark Slate’s personal bike and you’ve got a fine machine! 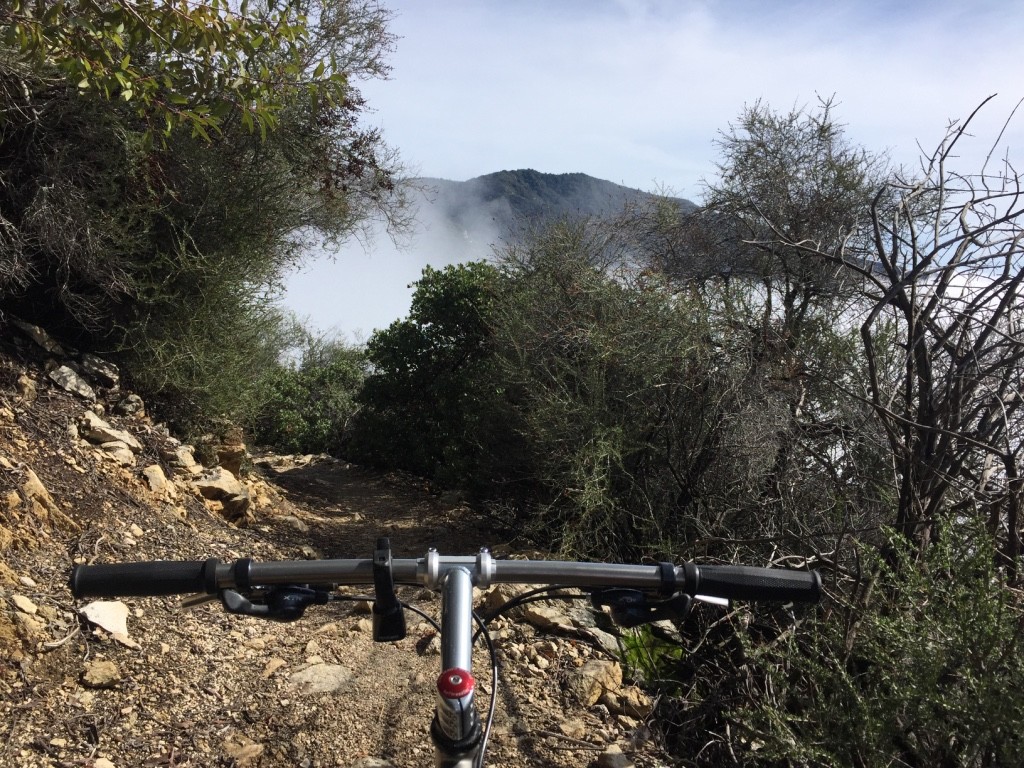 I’ve been on an on and off hunt for a Phoenix for some time. I love riding my Cunningham, but sometimes my concern about doing serious damage to it keeps me from pushing it too hard. So, I want something that has similar ride characteristics but won’t give me as much pause about hitting technical trails. At the same time I had bought a Merlin XLM and was planning on doing a slightly more modern build with, by that I mean M950 XTR and maybe a custom Judy/SID fork. So, when the opportunity to buy this 97 Ti Phoenix came up I figured it would kill two birds with one stone. 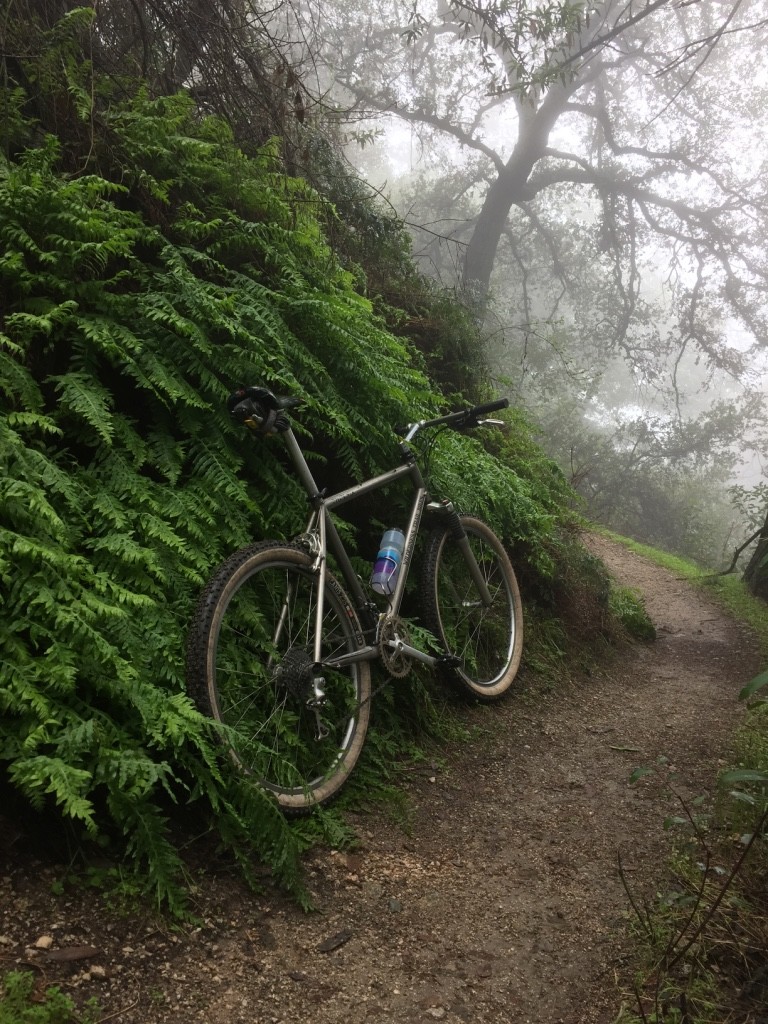 I’ll save the writeup on the details of this from and the before after photo shoot for a proper post, and instead focus on the ride characteristics this time around. 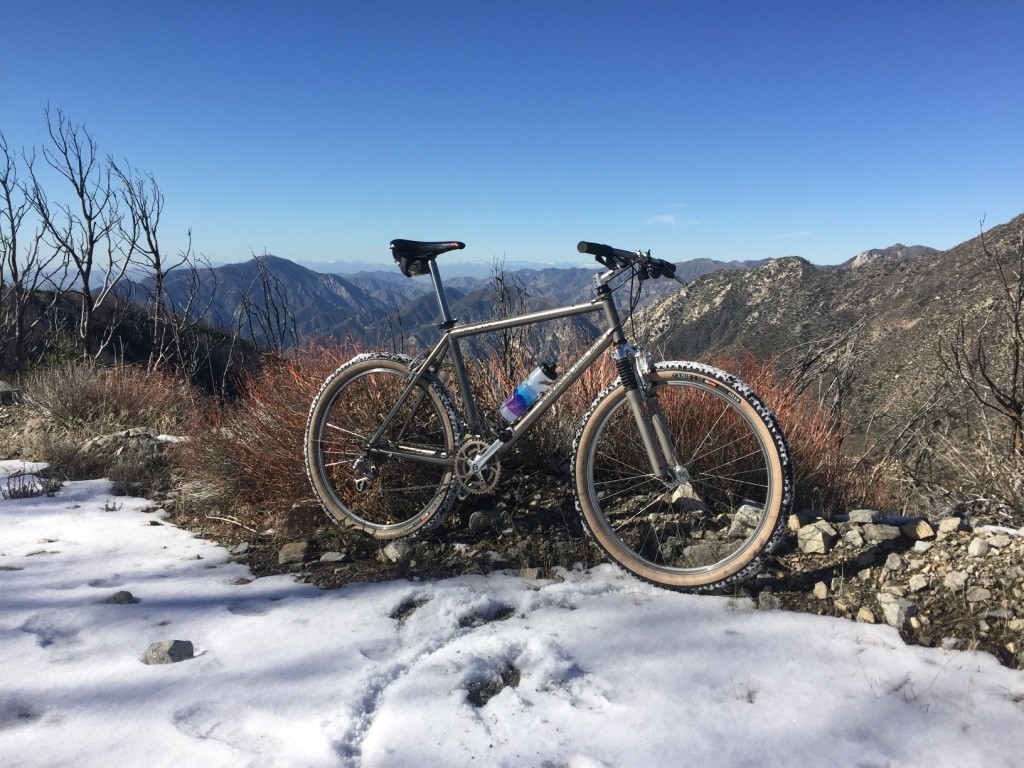 Before I get into it I have to admit that writing these ride reviews/reports is pretty hard. I tend to pre-screen bikes that are known to have a racing oriented geometry, are light weight and for the most part are similarly equipped. So, among those there is a natural bell curve distribution whereby a majority of the bikes fall in the all around good pile, a few are disappointments and a few remarkably standout. So, while the Phoenix is definitely not an average bike by any means it didn’t leave me breathless like the Cunningham. I suppose that had I ridden it first things may have been reversed. I will say that I logged my fastest lap or segment times on the Phoenix, but that is largely due to the suspension fork. The thing this bike has going for it is that there isn’t a set of conditions, at least none that I have exposed it to that it can’t handle adeptly. Unlike say a Klein which is great for climbing but brutal for descents or maybe the Merlin which isn’t an exceptional climber or descender, but is a great bike for longer rides the Phoenix is solid all around. 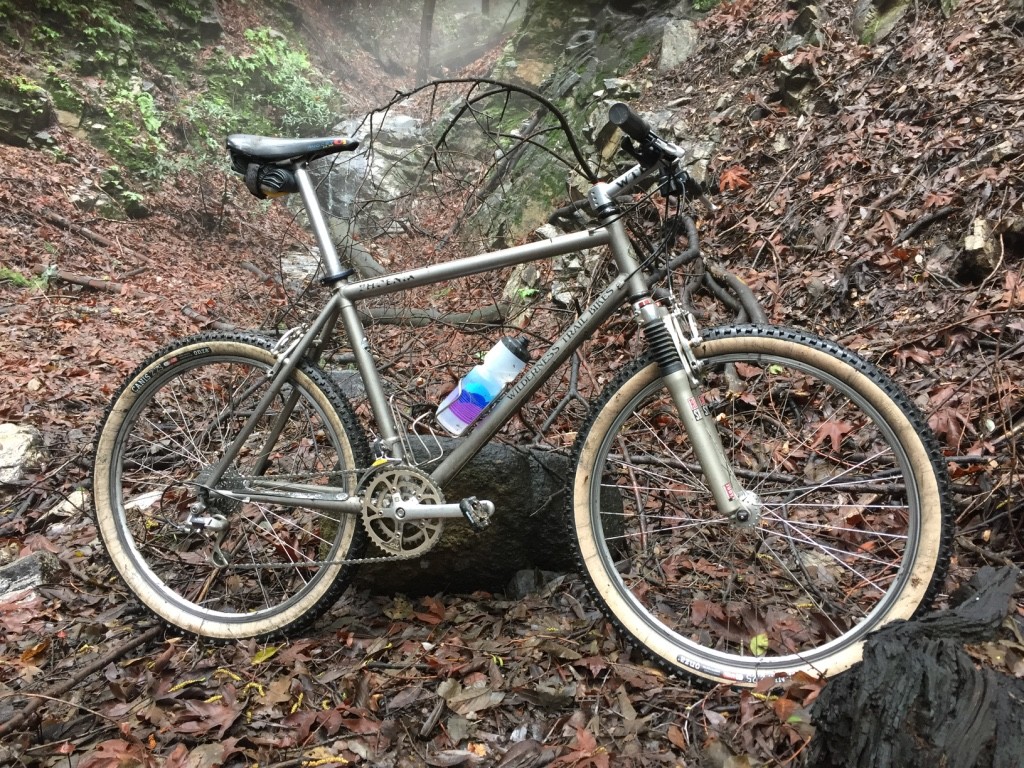 For starters the geometry is almost a direct take off of a Cuningham Racer, always a great jump off point. Take that and throw on low gearing courtesy of a Suntour Microdrive 20/32/42 crankset and an 11-28 8-spd Shimano XT cassette and I can pretty much go anywhere. Tack on some wide 27″ bars and a tuned up Rock Shox Judy fork to give the bike a charge anything attitude. Then anchor it with the powerful, albeit finicky WTB Lever Link front brake and the reliable Toggle Cam rear brake. Lastly wrap the whole thing in some modern 2.25 Onza Canis tires and you have a platform that is really capable of taking on any trail I can handle. 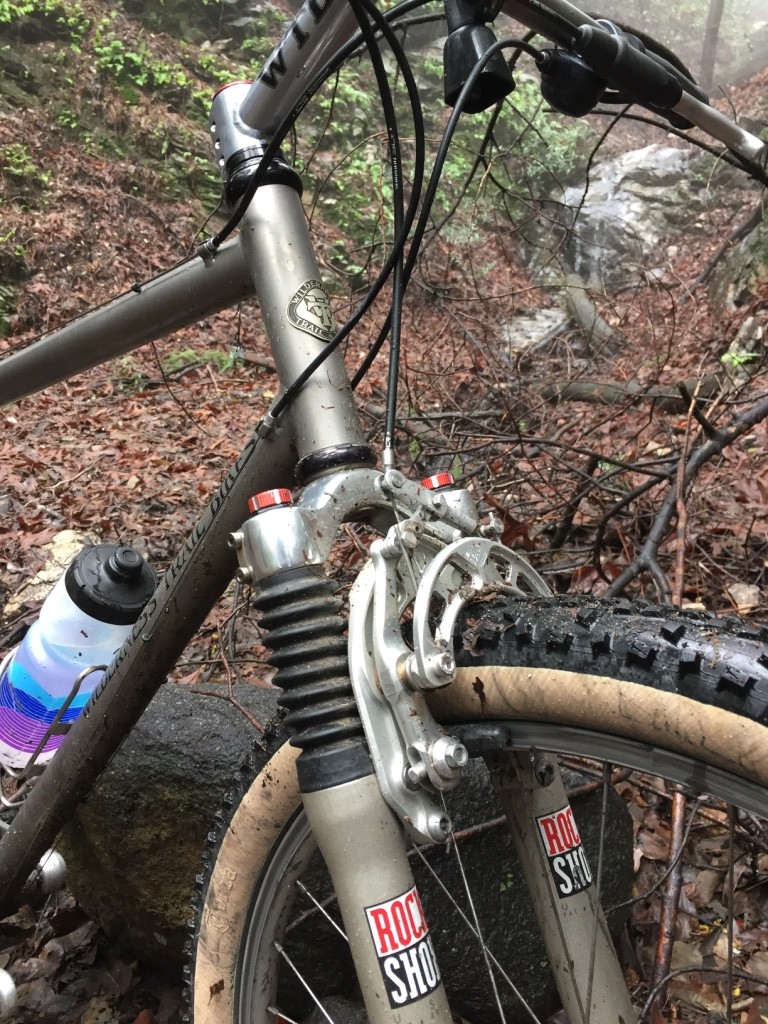 You can’t talk about this bike and not get into the front brake. I had it pretty well set up, I did… who told you I didn’t? I mean, it was pretty good. But then it went away. I have much to learn… Anyways, it’s a tricky brake to work on, no doubt about it. I felt like it was really hooking up at first, but then it kind of went spongy on me and I could never quite get it back. Hyperbole? I think not. 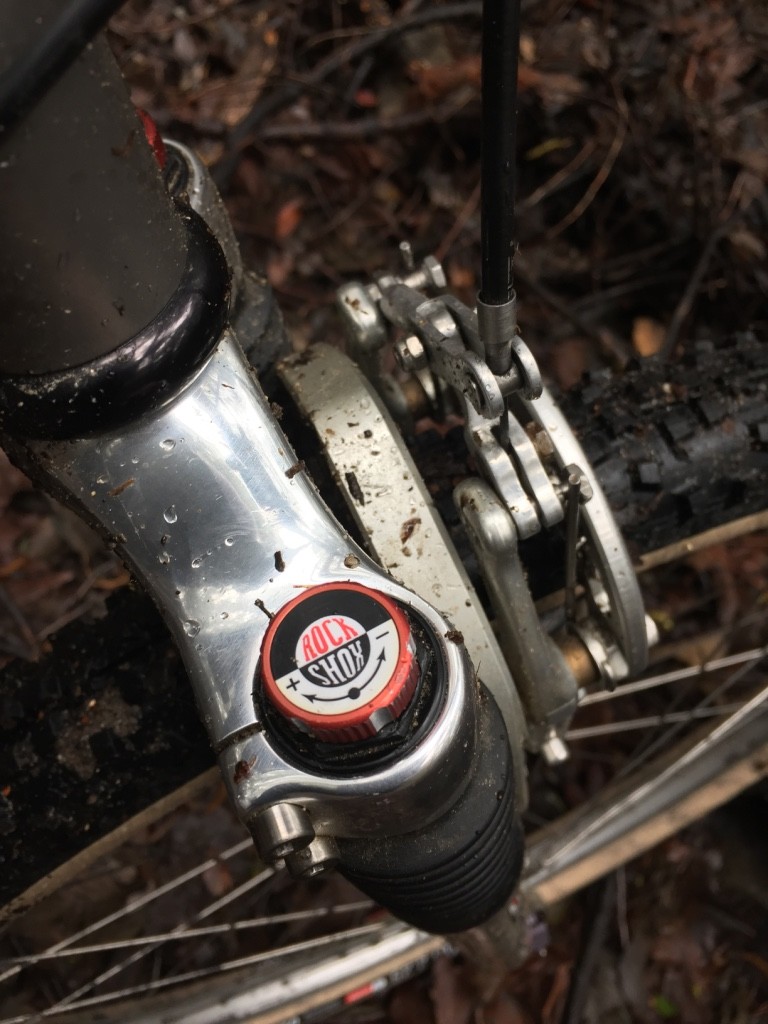 I got some good tips from the guys at Blackmountain cycles so I’ll have to try and work on it once I get the bike back. Suffice it to say these brakes have shown tremendous potential for both power and modulation. Almost to the point that the fork was too soft because there was so much brake dive on fast sections. Just goes to show it’s all connected. 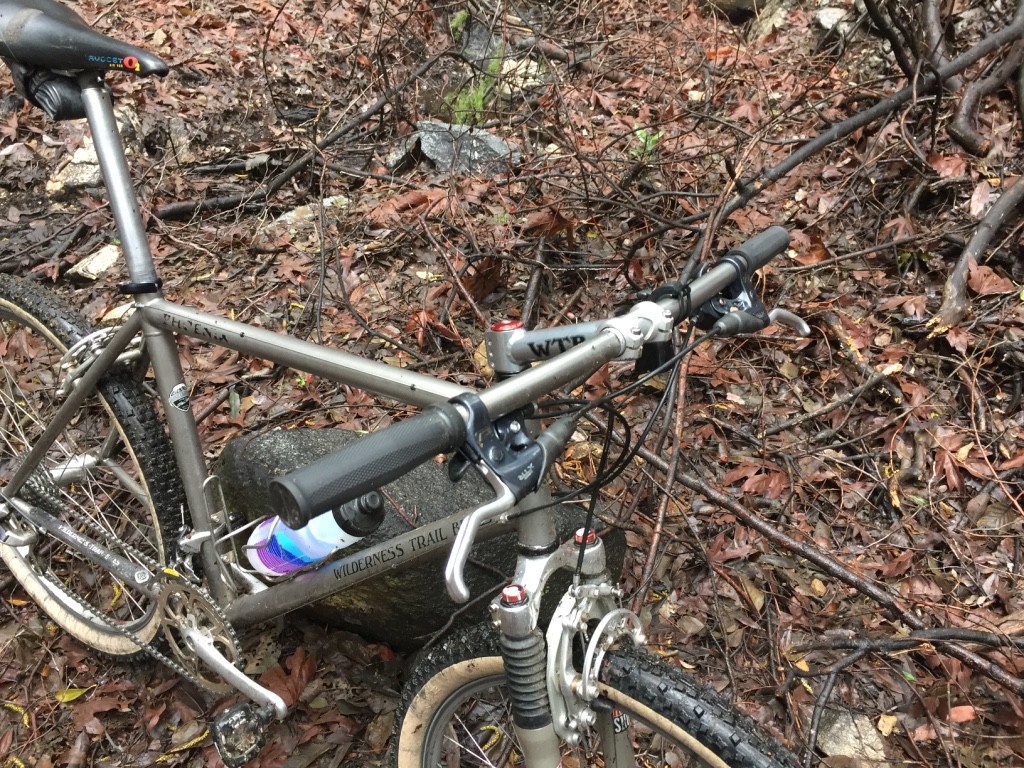 I love the wide bars on this bike. Obviously I have more leverage and then there is the added comfort. I’ve started converting most of my riders over to 25-27″ wide bars. Luckily many of my bikes are at home with a Ti bar and those are relatively easy to find. I think the Yo, Merlin, Cunningham and this Phoenix all have wide bars and I’m going to extend the MC2 bars on the Adroit shortly. There are sections of the Middle Merrill trail that I never ever ride, and even thought it’s been a while since I’ve been on there and the trail had suffered some serious erosion over the years I was able to ride virtually all of it and with great confidence. A true testament to to the bike’s ability to both inspire and reassure! 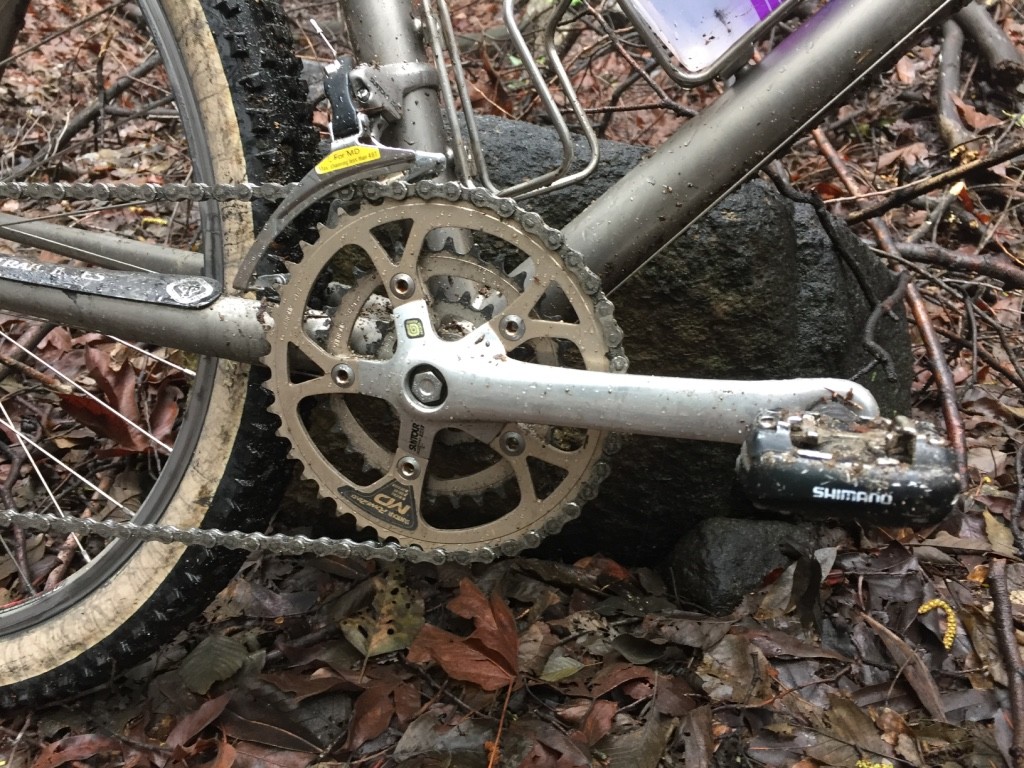 Mark had this bike built with Shimano’s M737 XT grouppo which borrowed the gear ratios from Suntour and their XC-PRO grouppo. Not being a huge fan of the look of the M737 parts (I am coming around I think),  but wanting the spread I decided to attempt my own approximation of the setup and run MD cranks with a regular XT cassette. The resulting combo is quite versatile and leaves enough top end power while enabling me to tackle both short punchy climbs and spin on long burners. 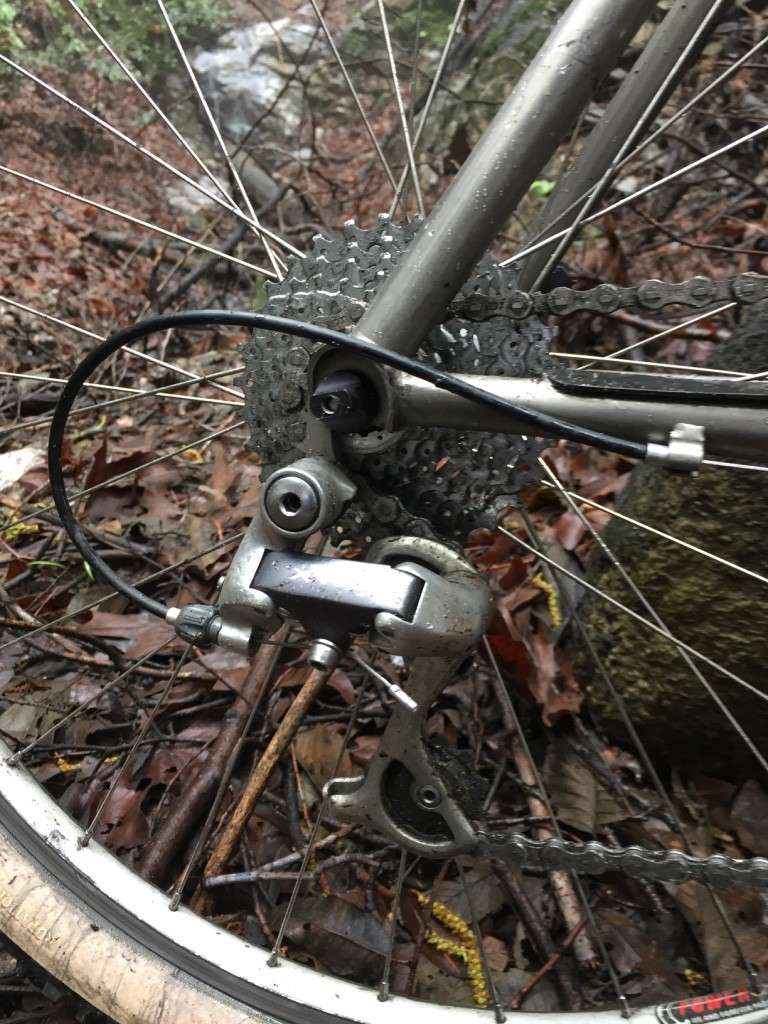 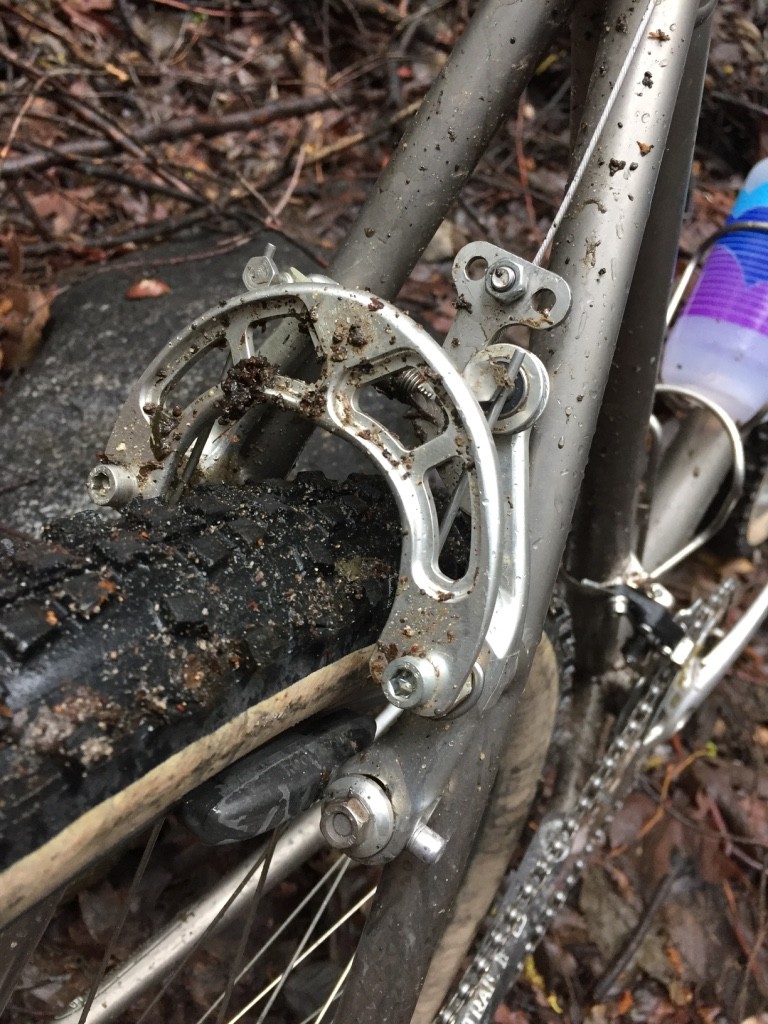 Unlike the front brake this TC worked from day 1. The cam took a bit of tweaking to get the cable to lay nicely but in the end it all came together nicely and the brake is working great. Maybe a touch grabby, but I can get that dialed in over time. I think I wasn’t expecting the frame to be quite so stiff and added the WTB stiffener plate somewhat redundantly. In the end the brakes have a solid feel which I really like. 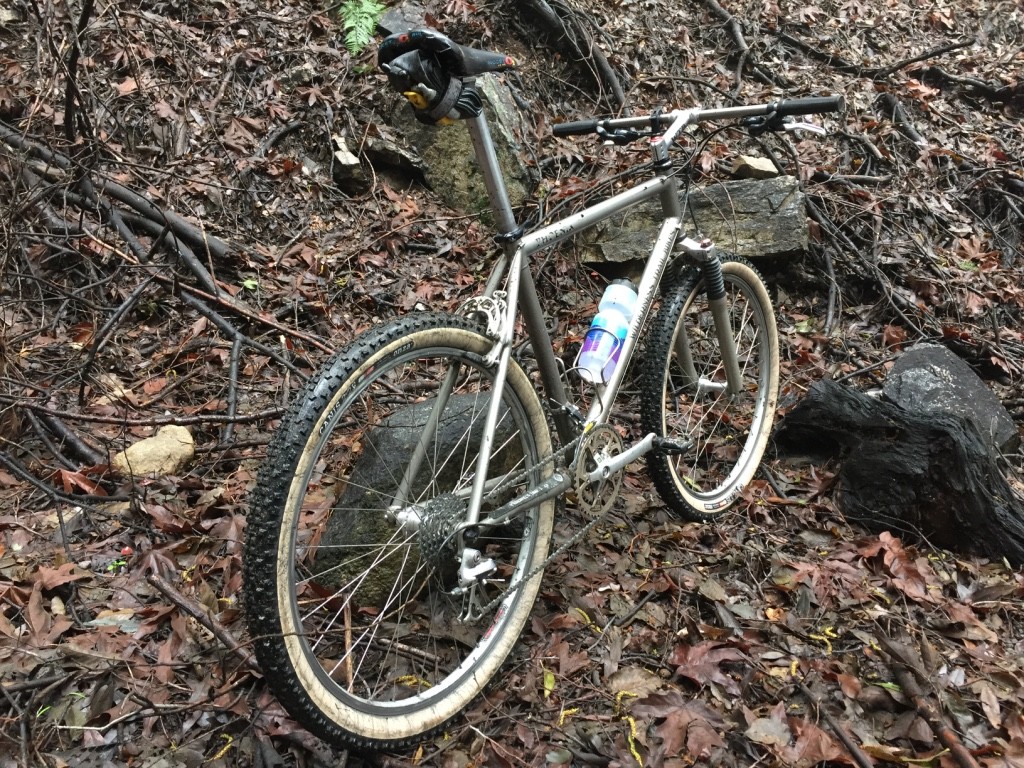 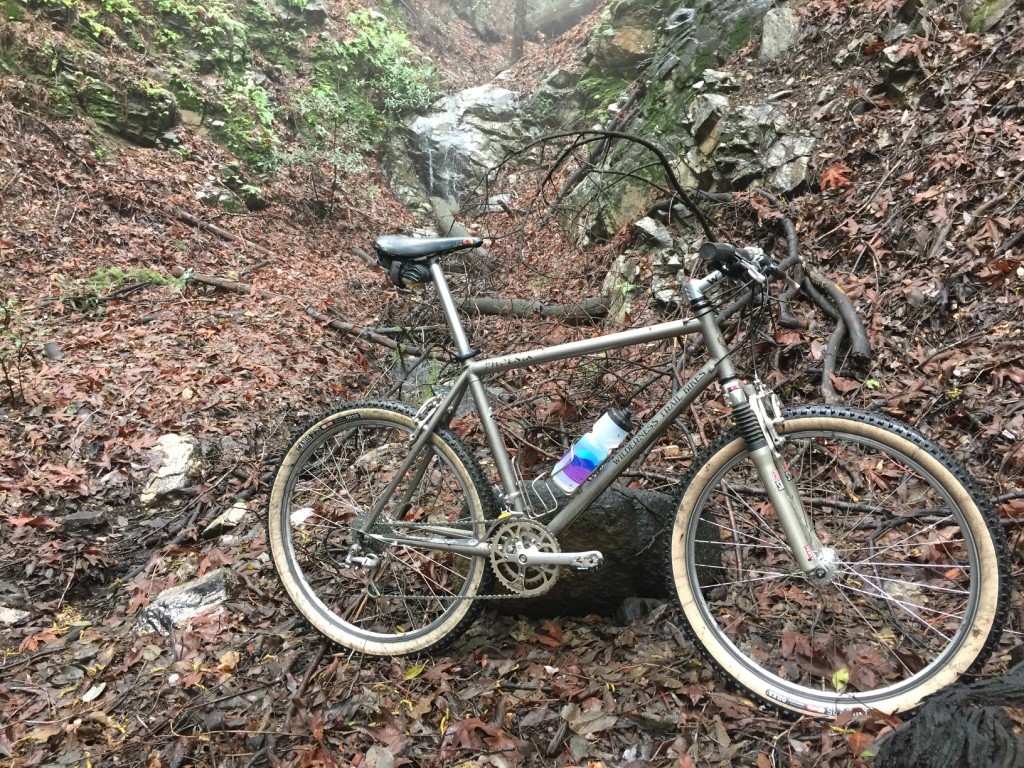 All in all this bike is a treat. Super stiff under power, but forgiving on technical descents. There really isn’t a hint of flex, unlike my Merlin which has visible BB movement under heavy climbs. This is quite impressive as I’m about #215 and am not known for being finesse rider. The traction while climbing is also impressive. Whether seated or standing the bike feels very well connected and lends itself nicely to powering up punchy and loose climbs. I also really liked the way I could manoeuvre it through tight and twisty single track climbs while attacking out of the seat. Mind you I didn’t do this long or often, but a couple sections of Winter Creek and Brown lend themselves nicely to that approach and the Phoenix was great. 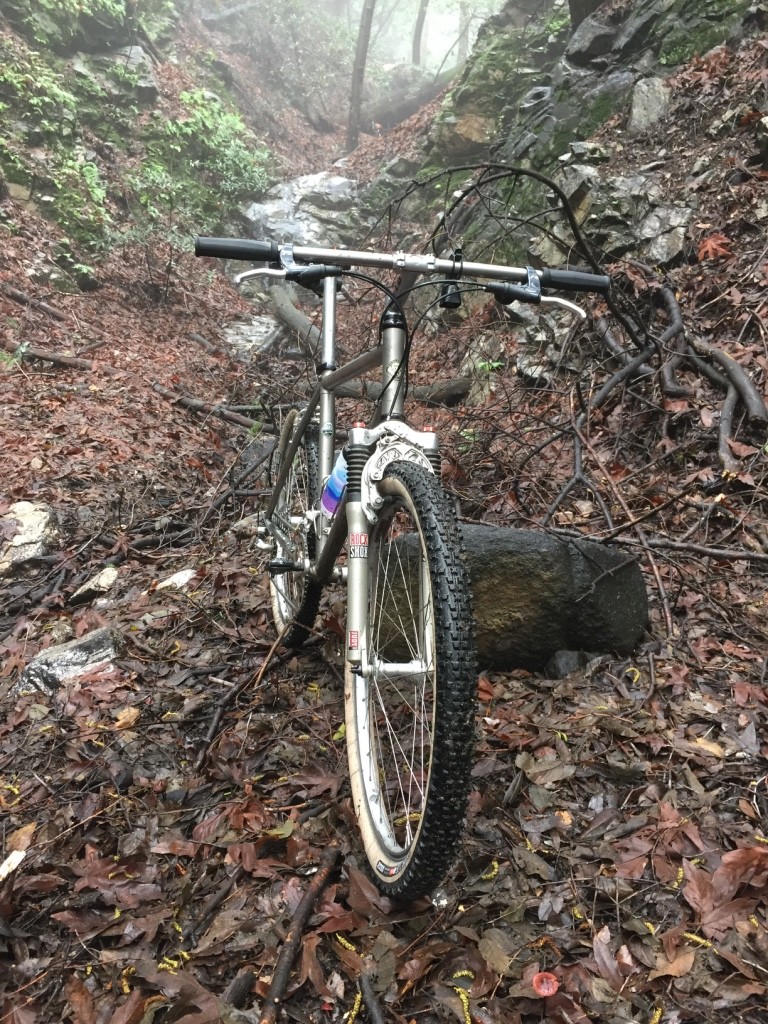 I think it was the bars. Yeah, it must have been the bars… Navigating tight and tight and technical single track was almost eye opening. I’m sure the fork helps here, but there is this lightness to it, the easy with which I can put the front wheel onto or over anything and get the rear to kick it over is something I keenly felt on every ride. Almost like I remember my first few rides on the Adroit, but smoother and more forgiving. 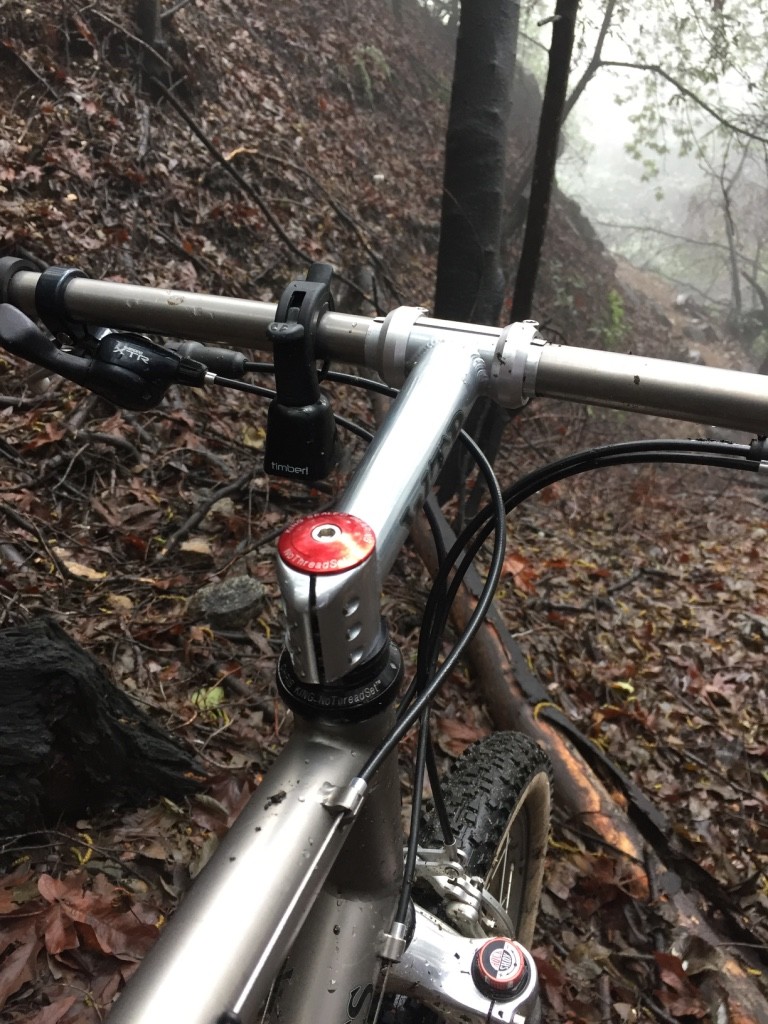 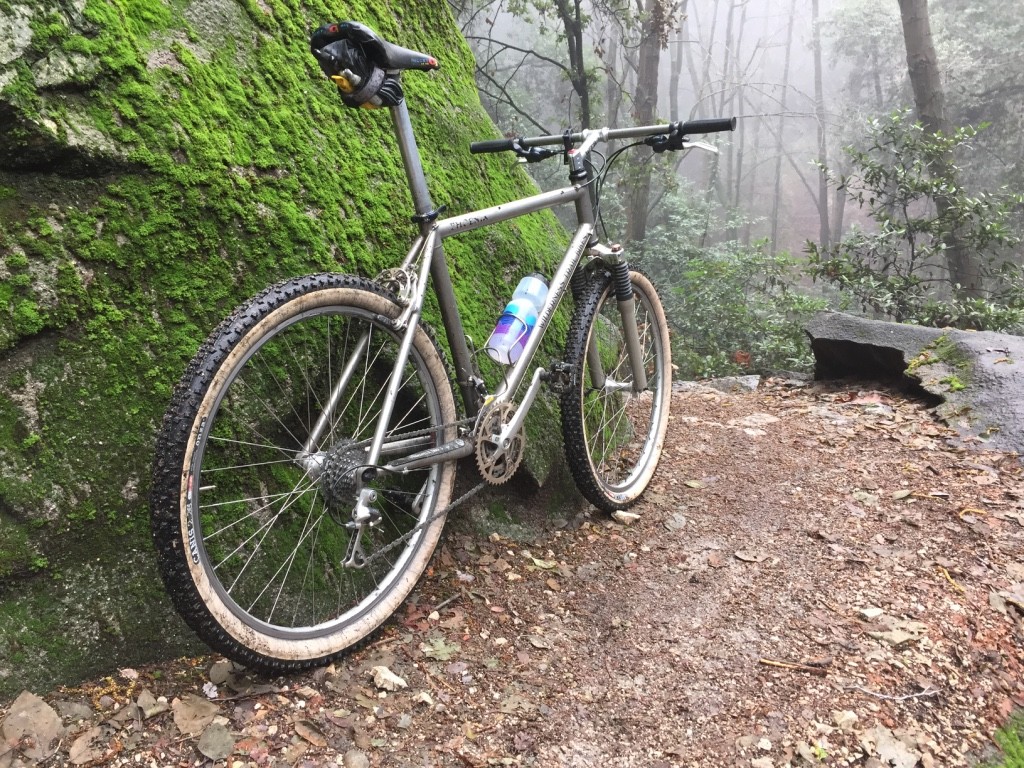 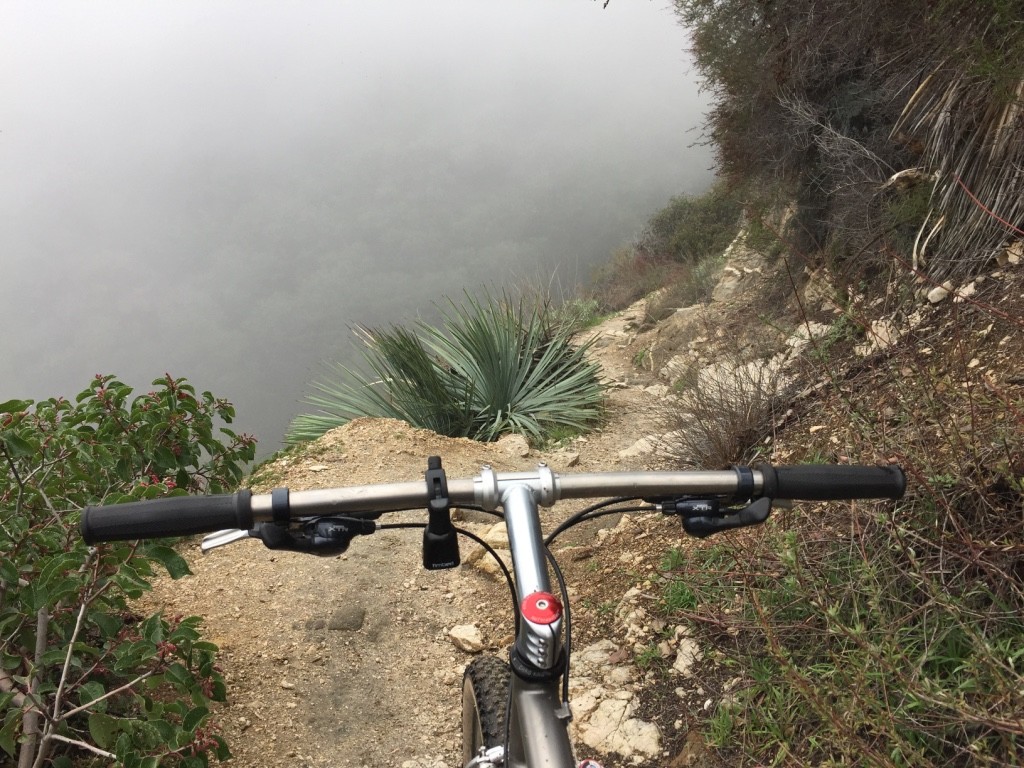 Thinking back on the rides I really can’t recall any faults. To summarise it I’d have to say the best part of the bike is it’s lively nature. Sometimes Ti can lack a little spirit, but not here. You get a really connected feeling while riding, there is a solid path between you, the bike and the trail. It’s easy to get the bike to do what you want and in response the bike treats you well. I never came off a ride feeling abused and beaten down like I sometimes do. Of course the bike is a great size for me and I can stress enough that having a suspension fork is quite a luxury from my point of view. Steve really is a wizard with Ti. I’m sure there are some amazing modern Ti bikes from the likes of Moots, Seven, Eriksen and the like, but I don’t think anyone was achieving these results back in the 90s. As for me I’m keeping this bike and am looking forward to getting to know it even better!