Growing up in the 90s I had a poster of this bike on my bedroom wall.

While a few Answer made versions of this bike have passed through my hands a real Bradbury made one, and especially one in my size was not something I ever thought I’d get a chance to ride. This particular bike is the 4th FS (of approximately 58 total made) that Doug built in 1992. As an early bike it lacks some of the refinements of the later bikes such as fully CNC’d top swingarm brace and lower swingarm BB joint (see the 93 FS write-up here), but essentially it’s the same bike and in a way maybe even cooler for it. 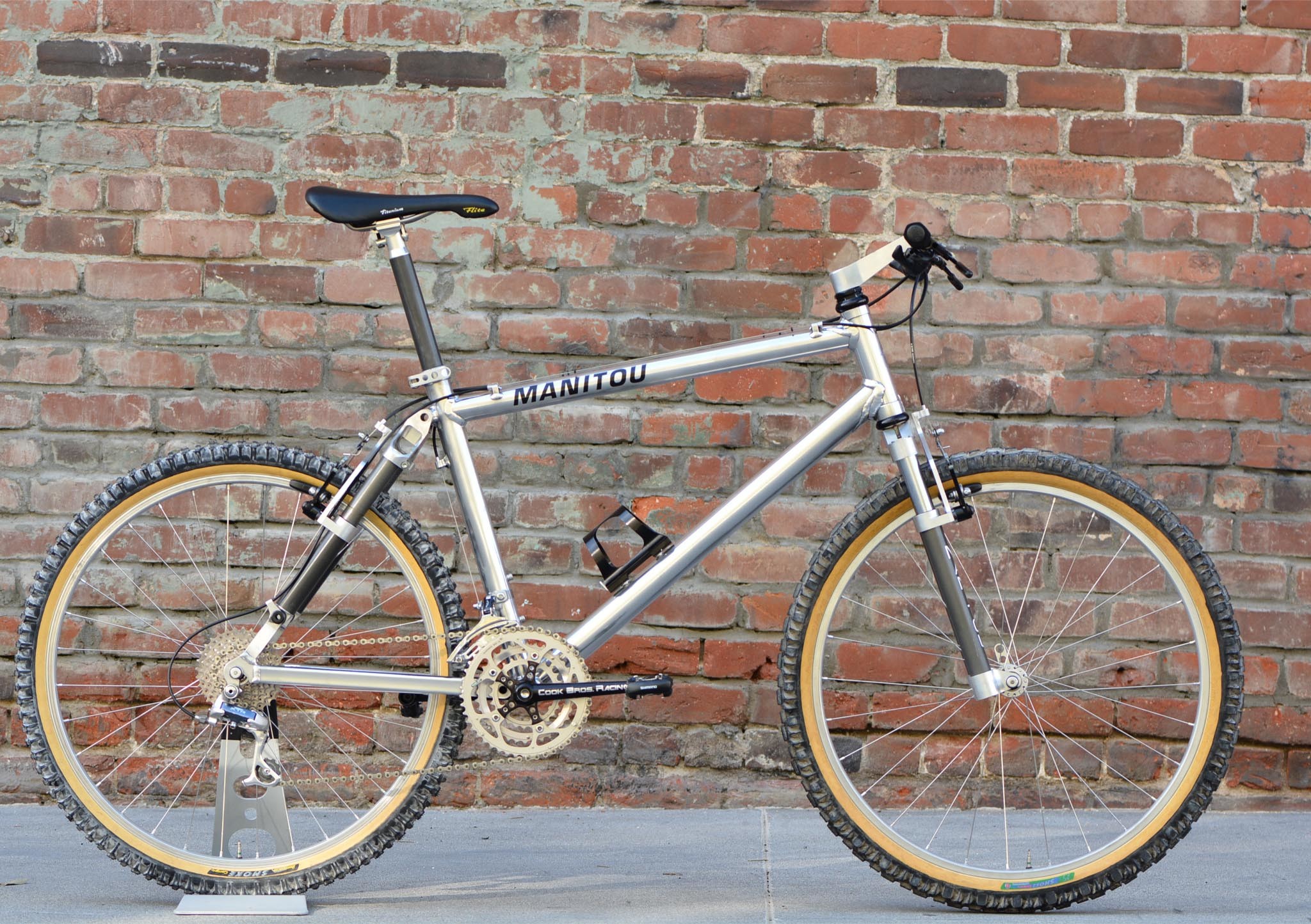 I have to admit that I don’t think much of vintage suspension bikes. I mostly ride rigid and only have one or two bikes that have front suspension forks. That said, I am really in love with this bike. Something about it just screams performance, mostly perceived but still. I have done a few turns of the crank on this particular bike and will do a trail review later, suffice it to say given any sort of reasonable expectations, this bike did not disappoint.  So, it’s not just looks, there is some go! 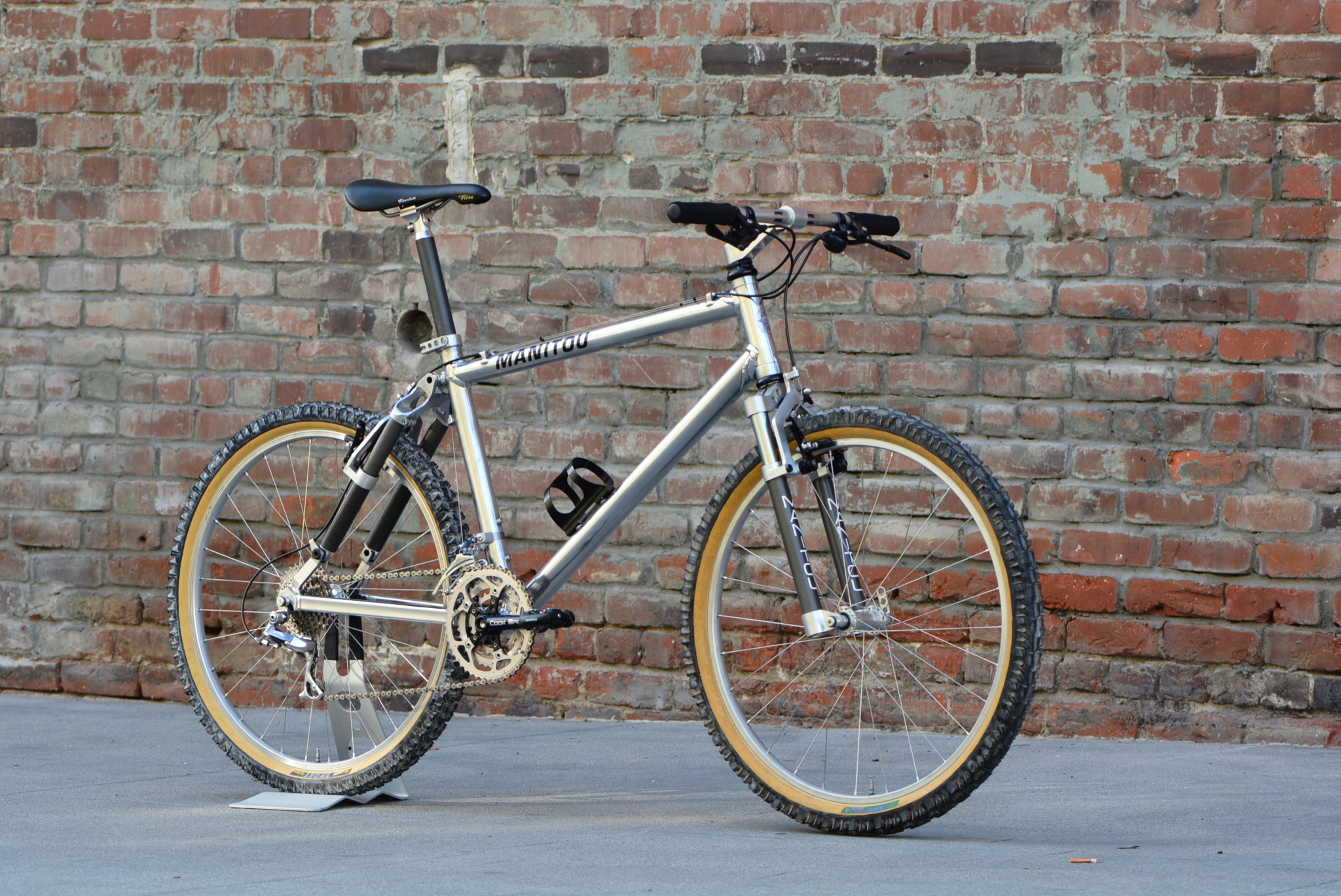 Another thing about this and Bradbury Manitous in general is that while they have a high degree of so called “CNC Bling” on them, they still manage to (in my opinion) look classy and subdued. While others strive for the loudest bike because that’s what they remember from the era, I prefer a bespoke conservative style. So, this bike is in that regard the best of both worlds, cutting edge tech without any of the look at me ostentatiousness. Did I mention it’s fun to ride? WIN WIN, right? 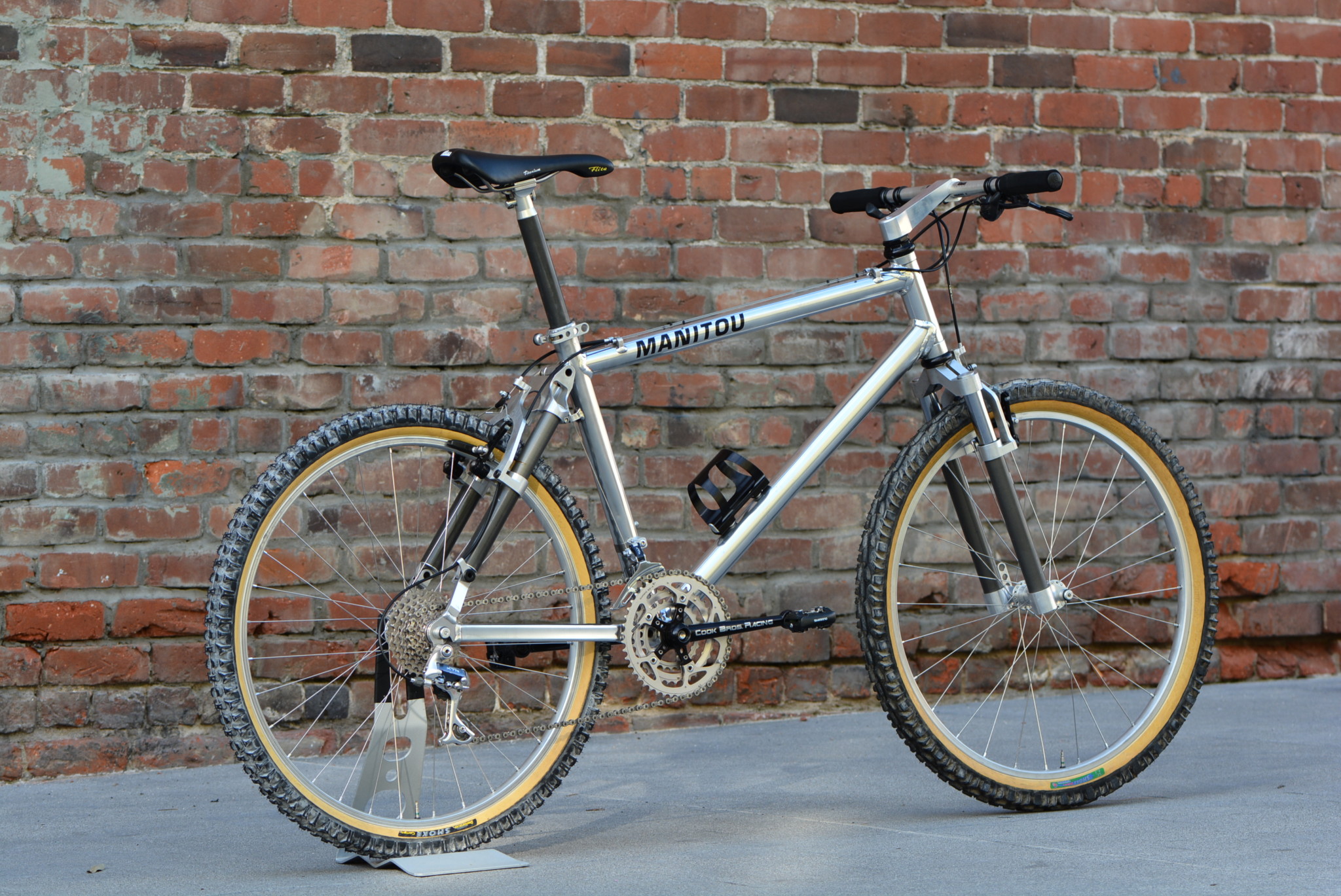 Pick an angle, any angle and try and tell me you don’t like it. 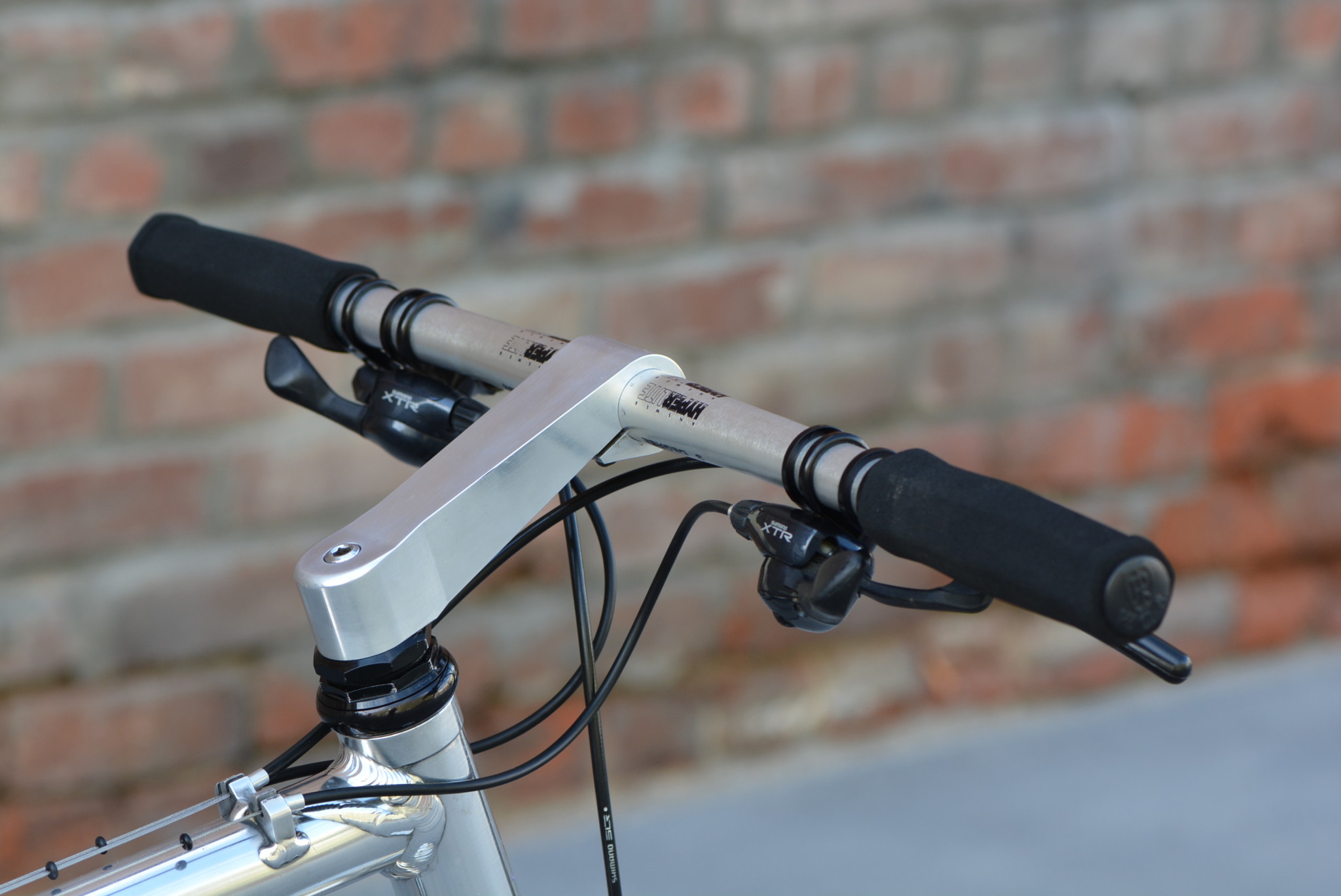 When you ordered Manitou fuselage you’d receive a frame, front fork, stem, seat post, wheels, bottom bracket and front derailleur. I can’t remember whether a Chris King headset was included or not. Either way, the price was steep but you did get a few extra things for your money. I always liked Doug’s stems, and particularly the 1 1/4″ ones as seen on this bike.

For this build I decided to pull out all the stops and install a full Grafton brake kit including the custom shifter perches enabling the use of M900 STI units, which were some of the best around during that era. 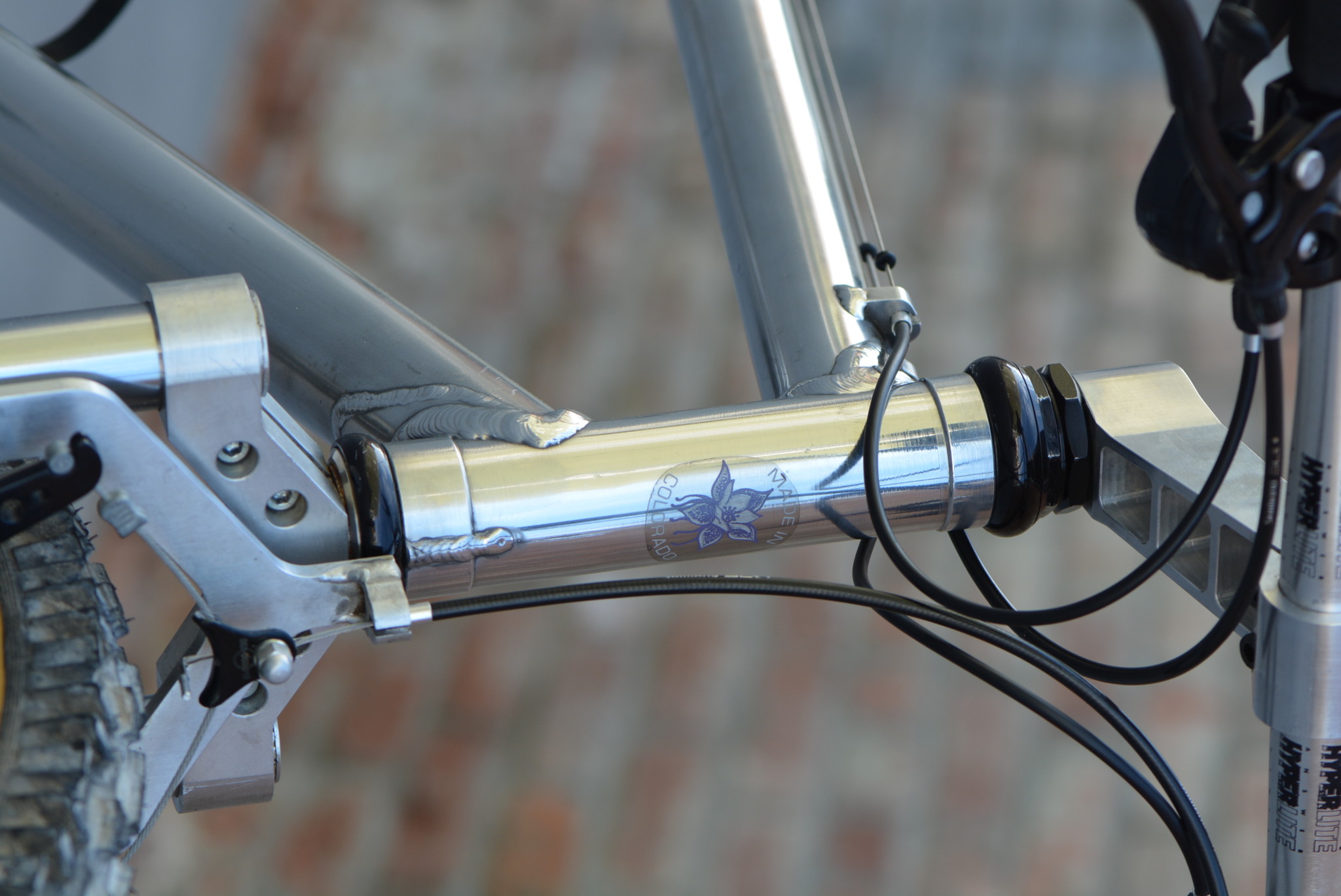 This particular frame suffered a crack early on and was subsequently repaired by Doug in the simplest of ways. According to Doug these types of repairs often did the trick and once the stress on the frame was relieved it wouldn’t propagate or crack again. Nevertheless I further reamed out the headtube to reduce the stresses even more. 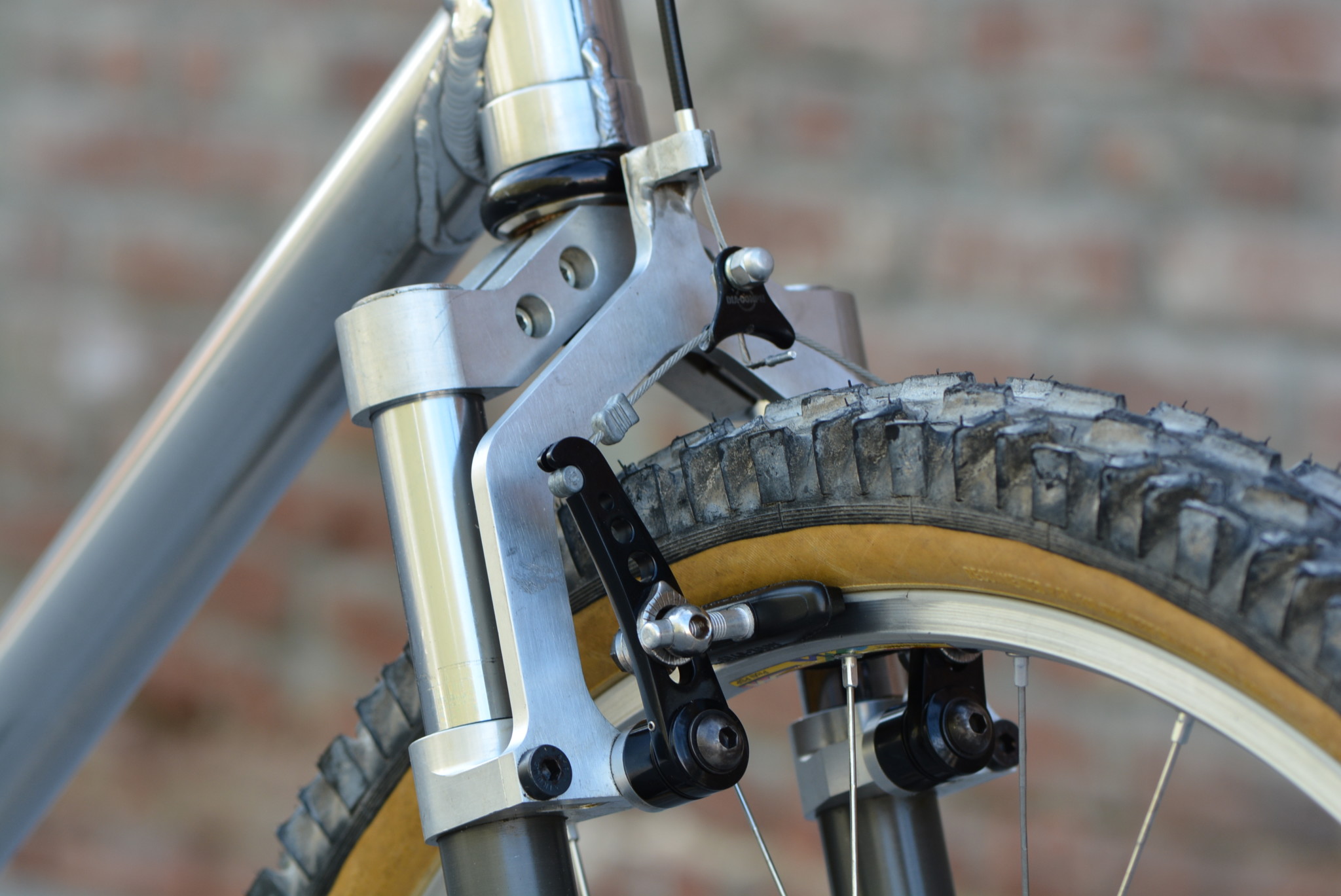 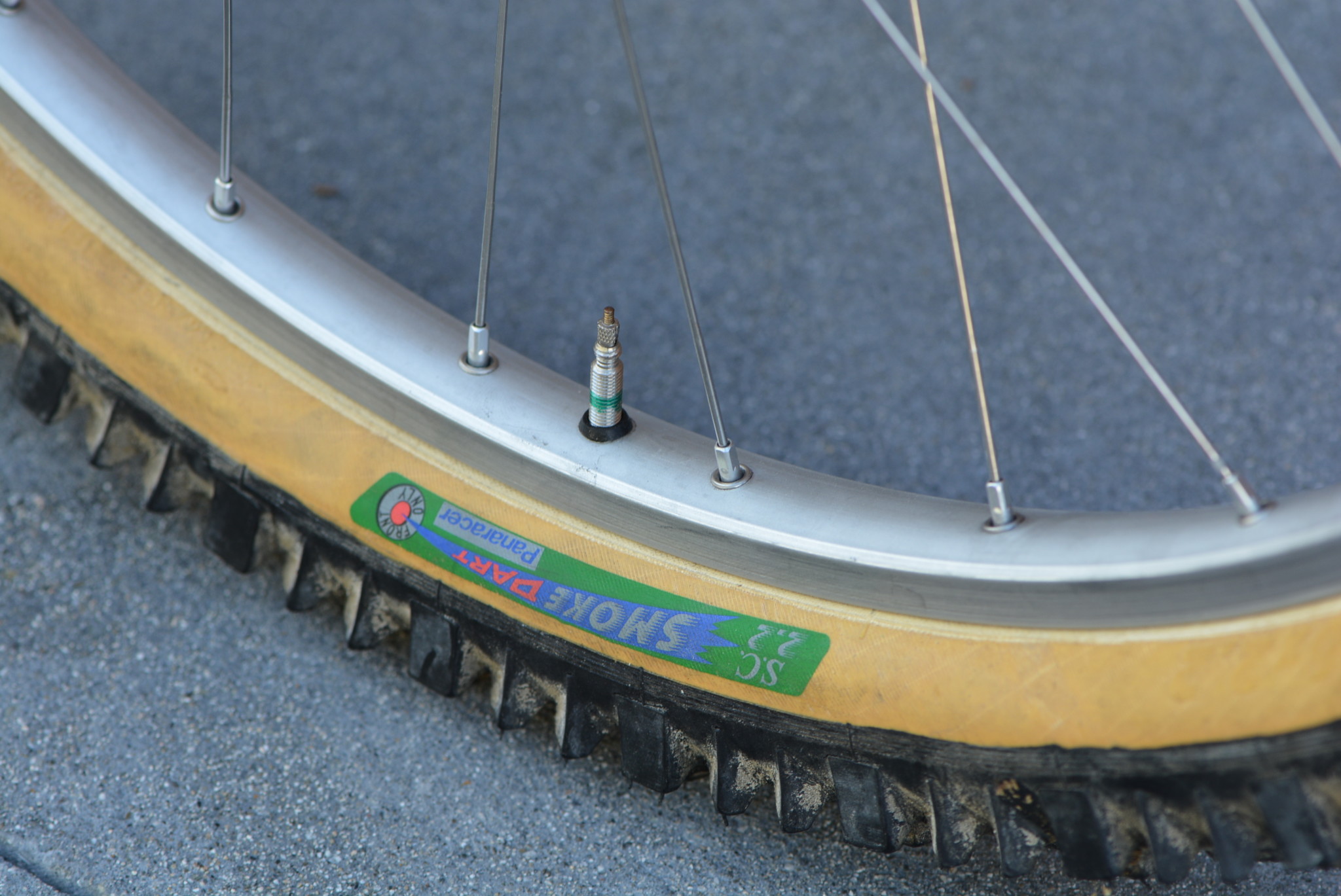 It’s Bulleye, no it’s Hi-e, no it’s actually Doug’s exact copy of either one… 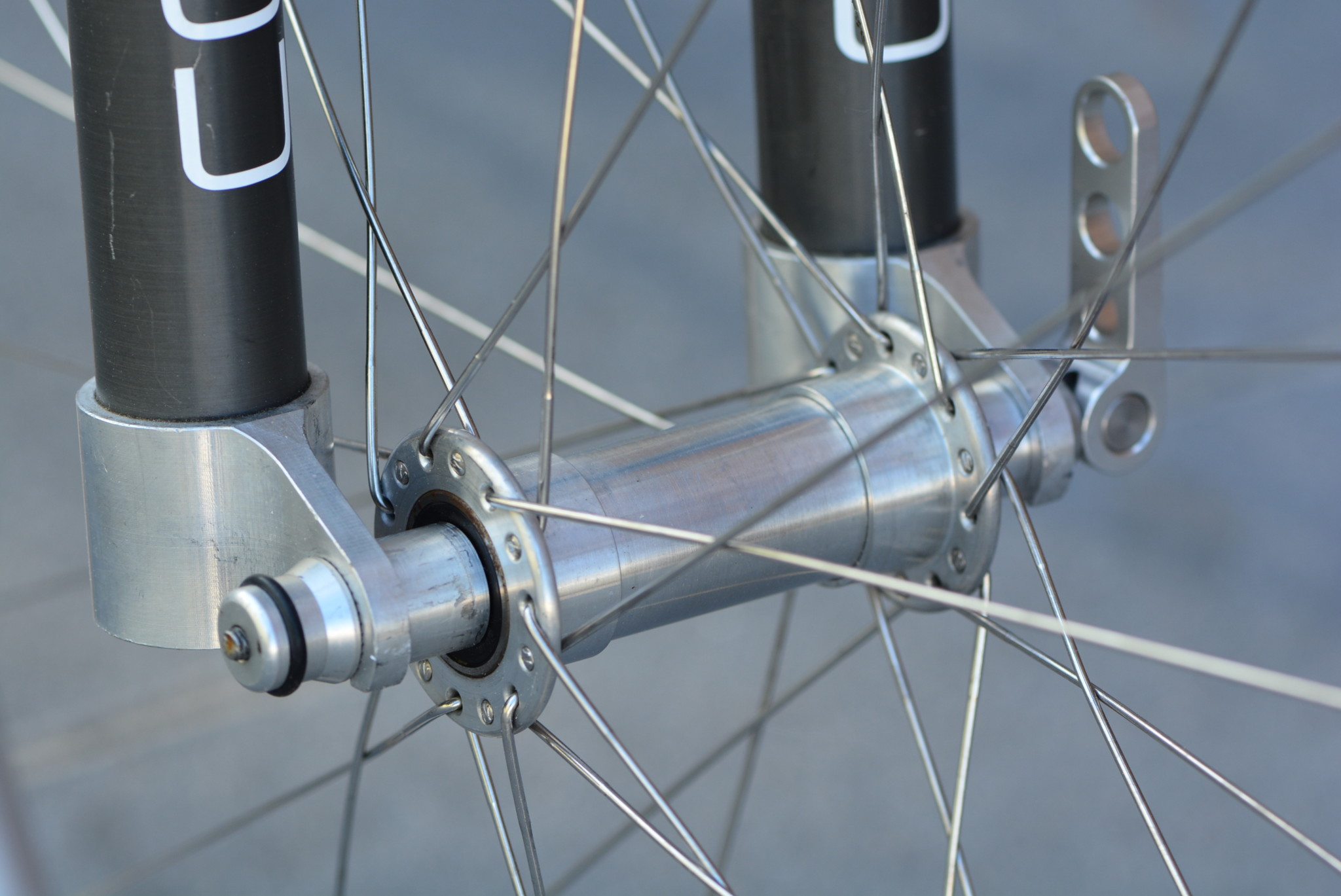 Though he wasn’t the first to do it, Doug made good use of the wide front (115m) and rear (145mm) hubs in most of his bikes creating light weight (fewer spokes) and strong wheels while providing increased stiffness. 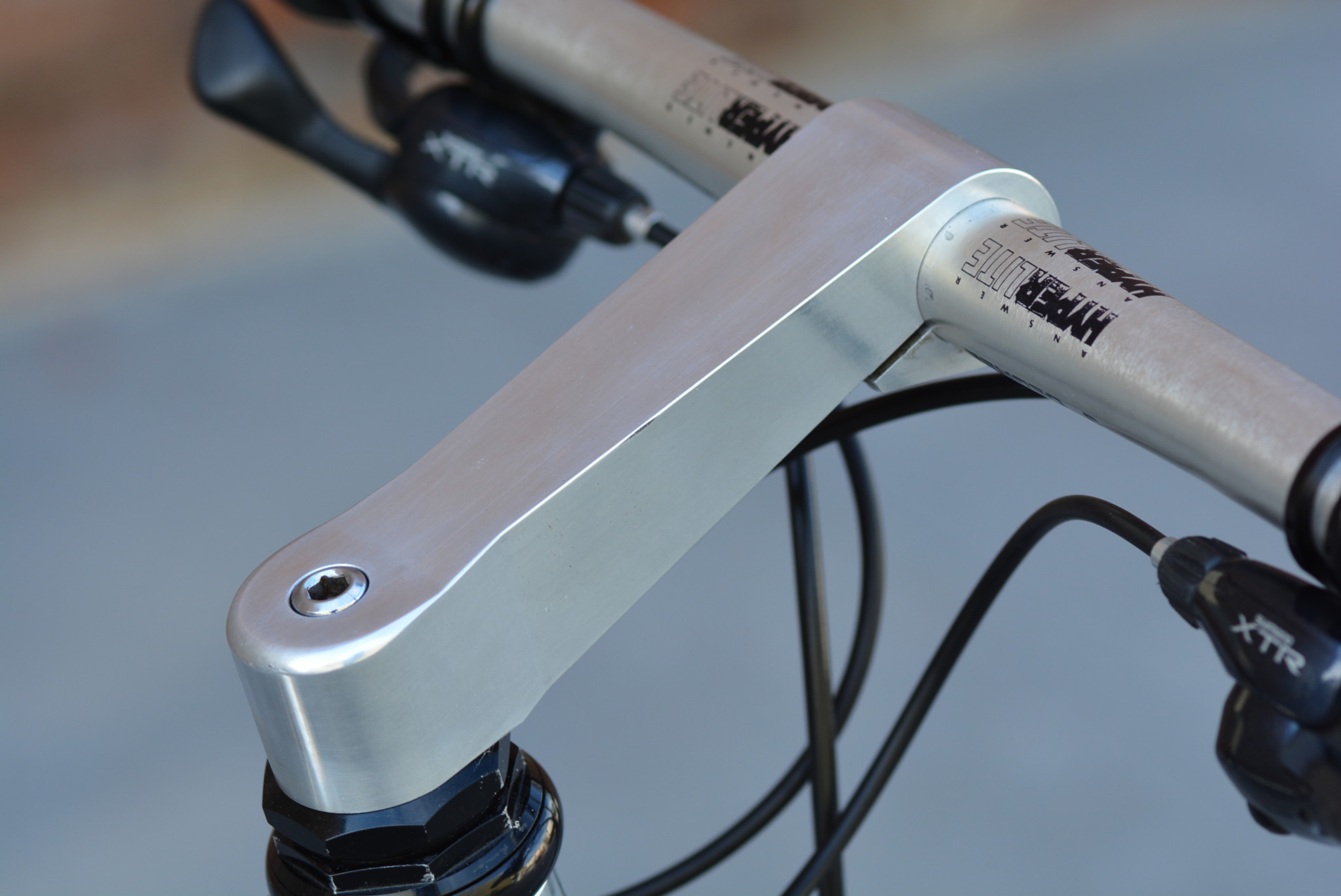 Apparently I can’t get enough of this stem… 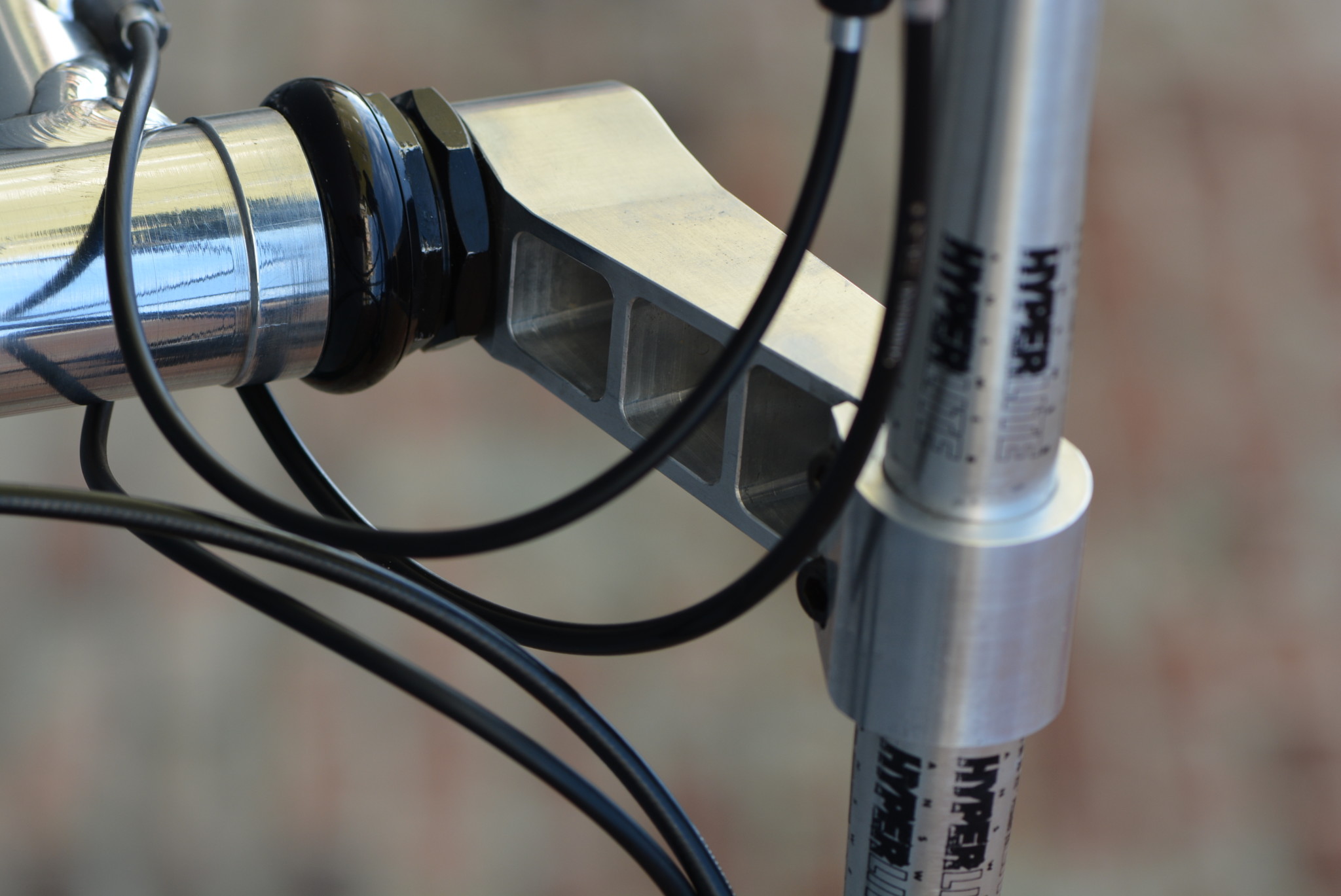 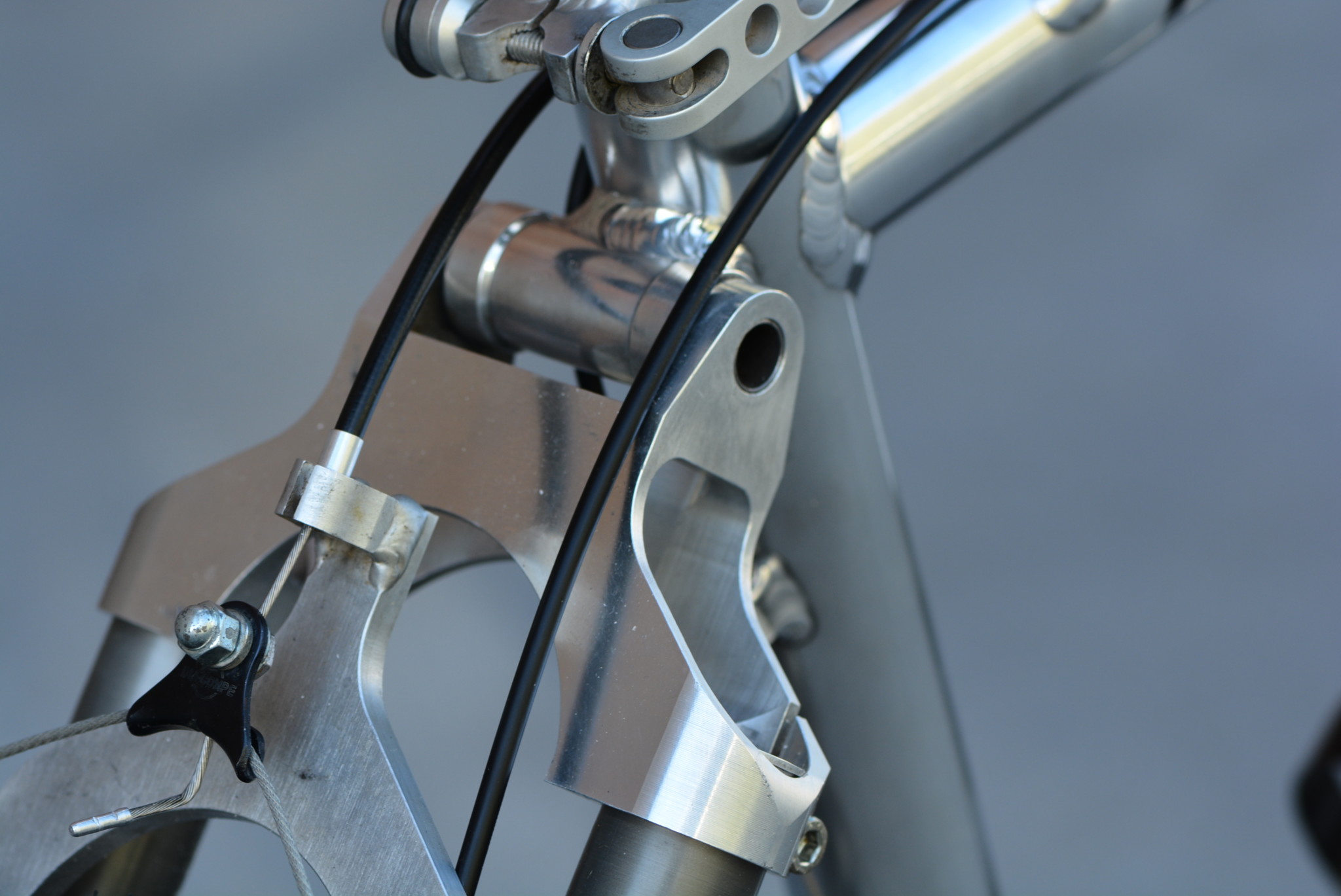 As I mentioned earlier this upper swing arm crown is an early evolutionary design lacking all the intricate CNC milling that was used on the later ones made by Doug and then Answer. 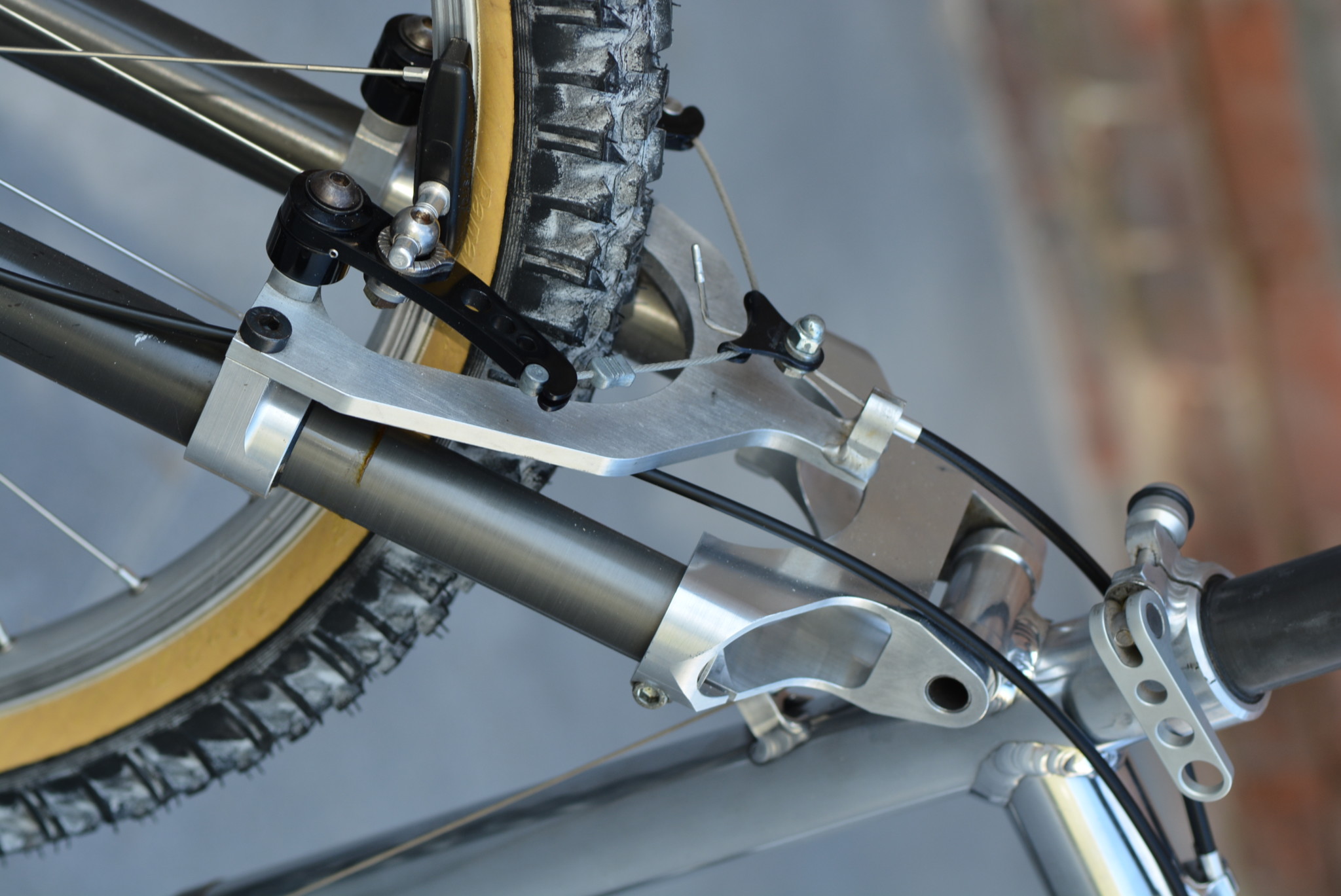 The rear suspension is surprisingly effective and the bike basically feels like a hardtail while climbing while providing a relatively high degree of absorption on the descents. 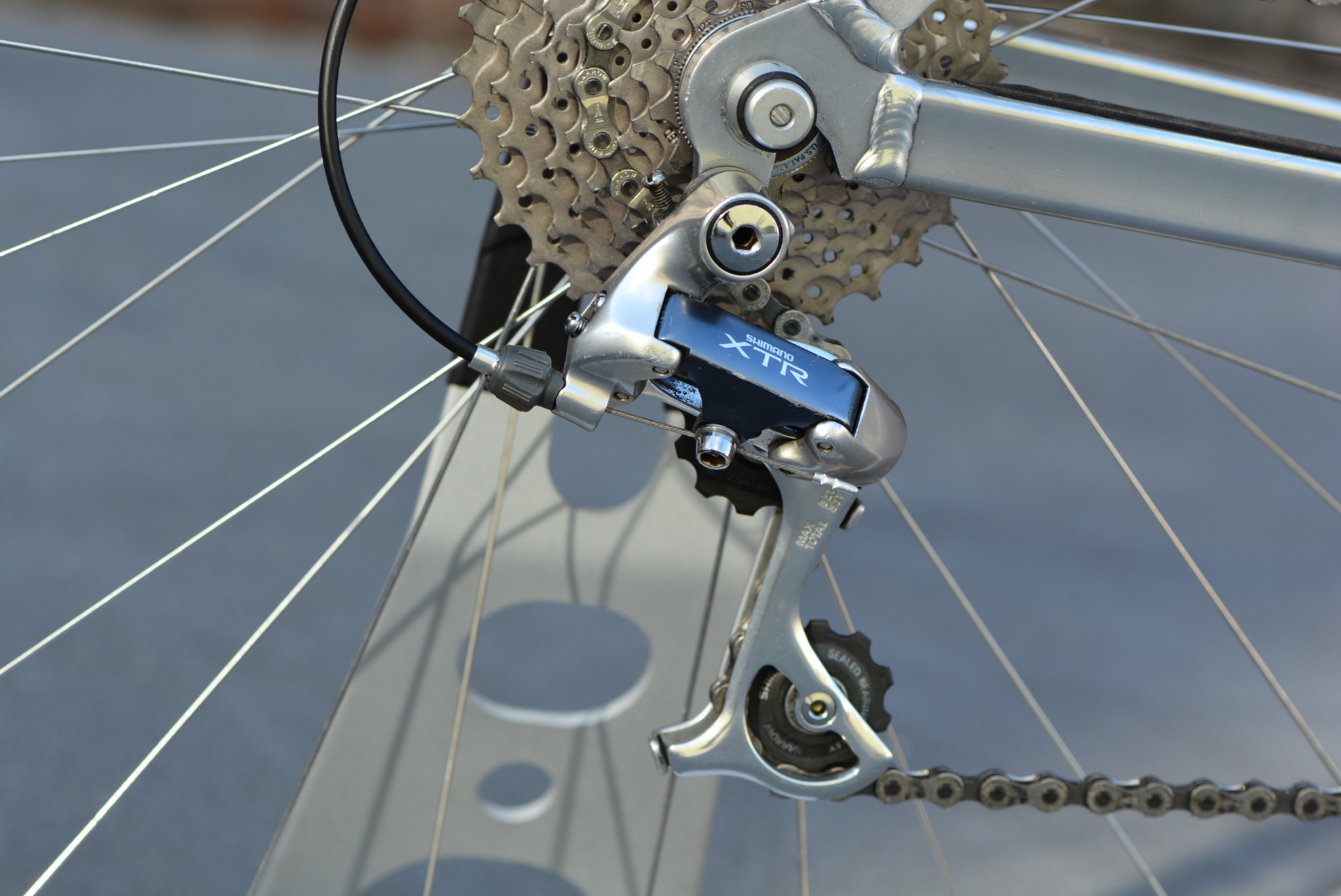 I never get tired of the venerable Shimano M900 grouppo, it looks great and work amazingly well. I don’t get why people go to such lengths to source all of the CNCd drivetrain components when this degree of performance is not only more appropriate but also so much more functional. 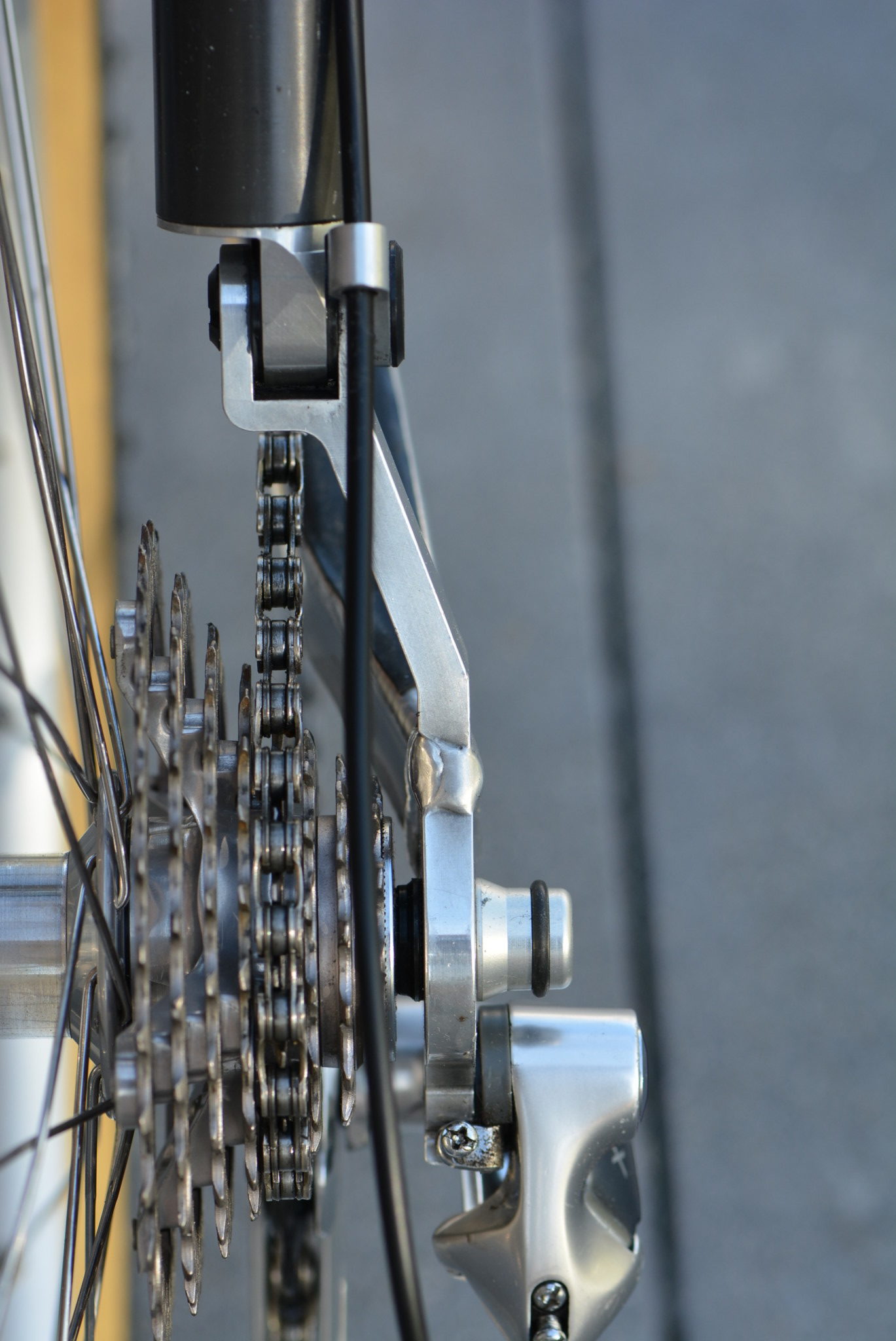 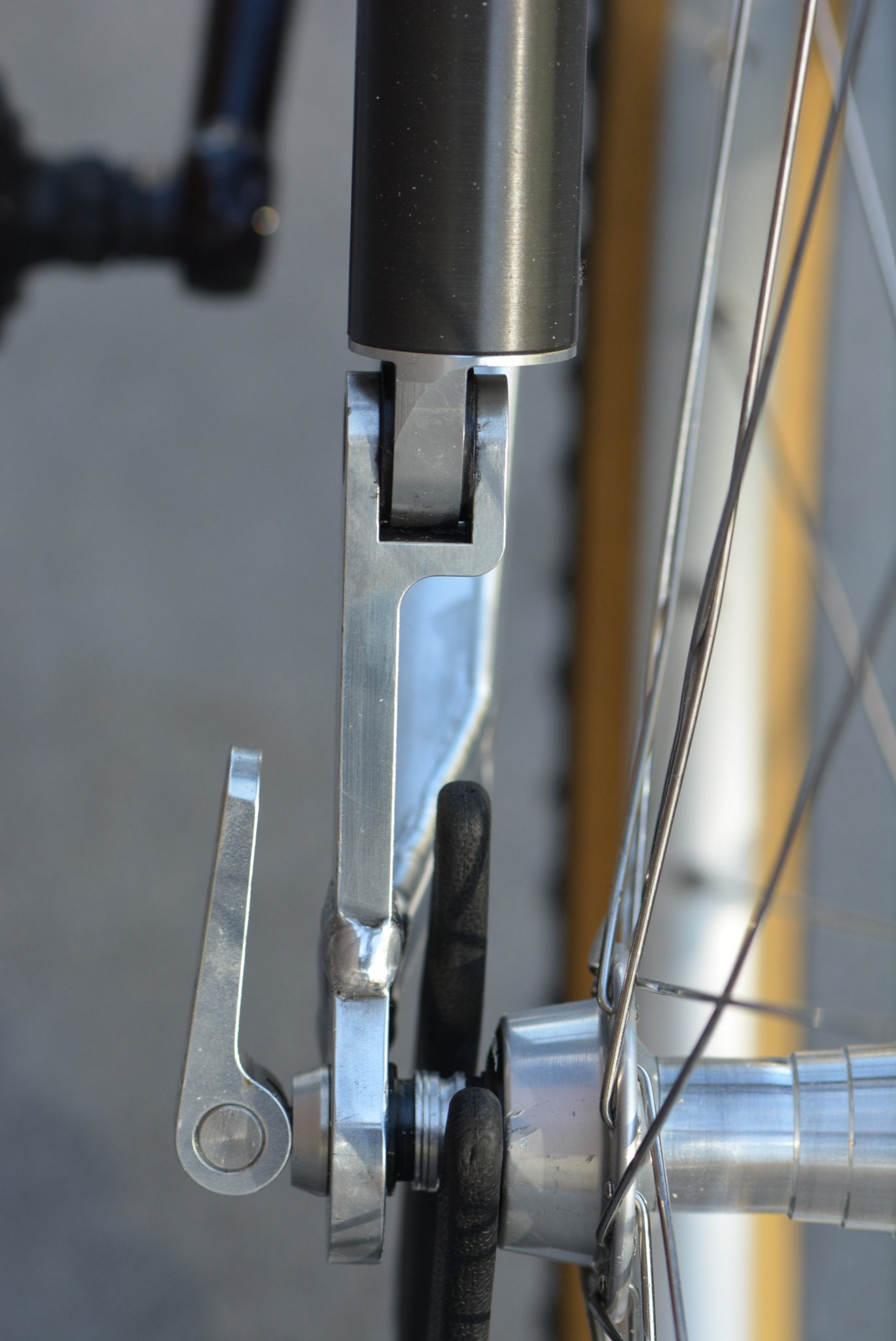 The answer made bikes did away with the wide spacing and had dropouts that mirrored each other on both sides. 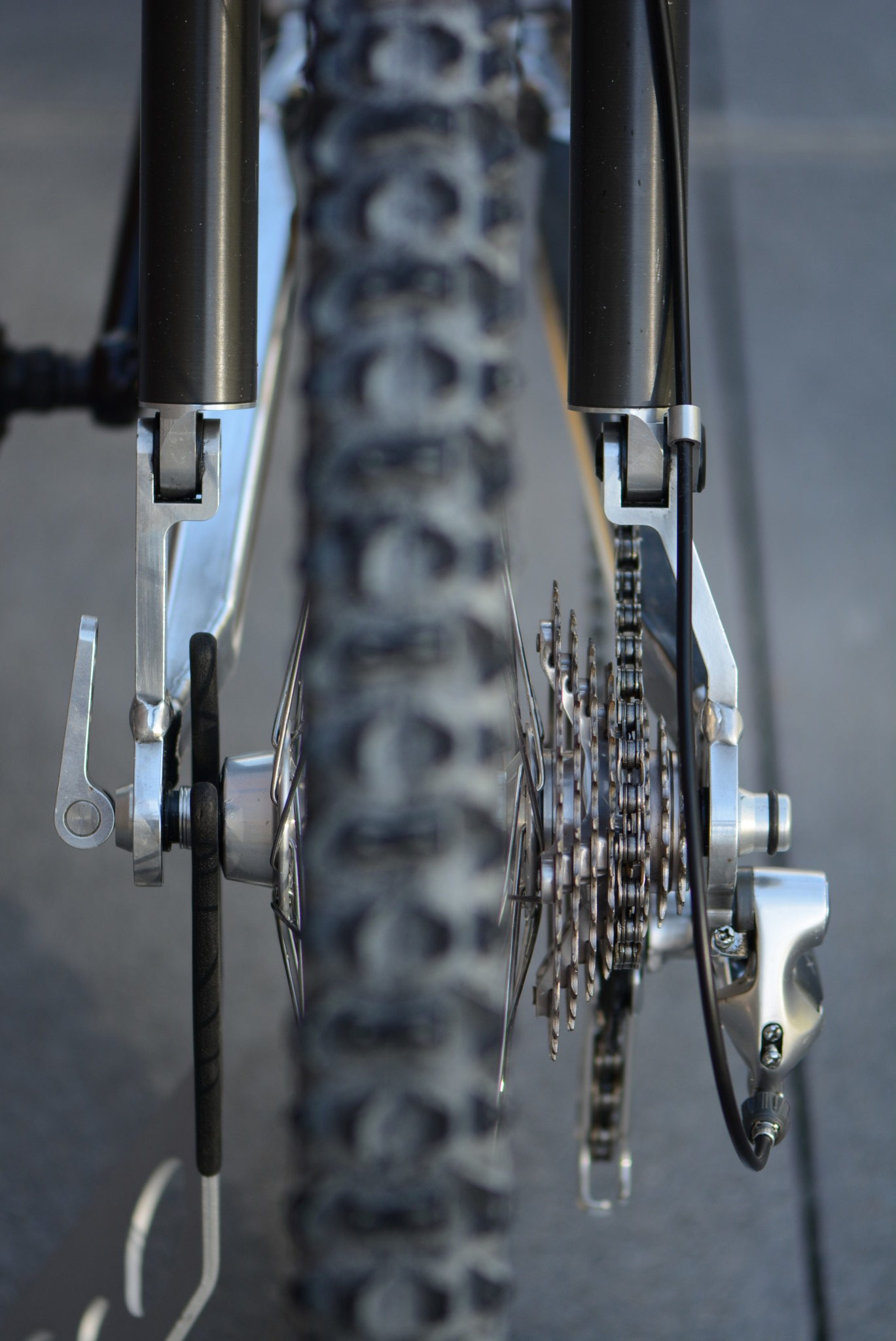 This is quite possibly my new favourite way to shoot bikes. Get ready to see it all that freaking time! 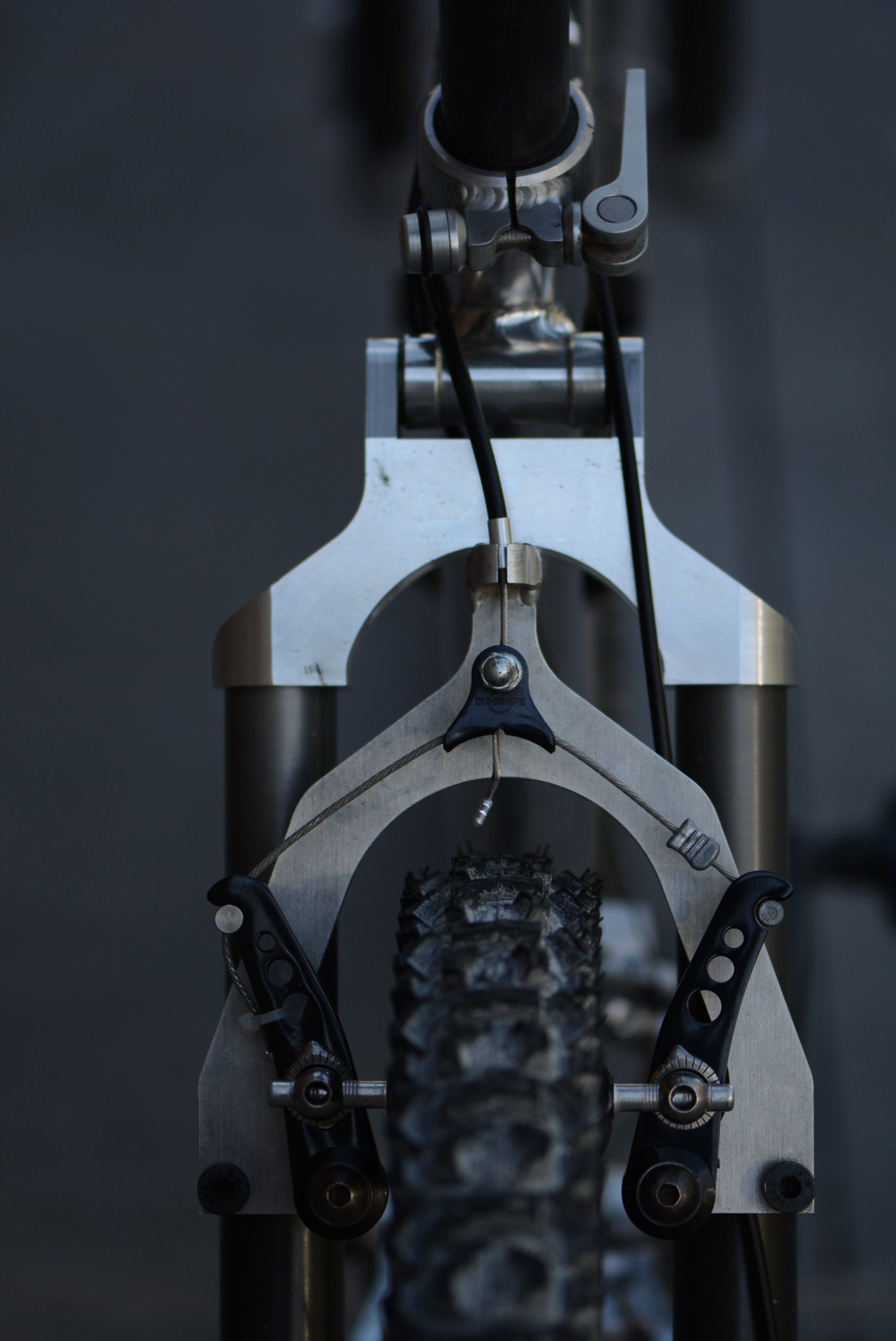 When it comes to cantilever brakes I tend to shy away from aftermarket units, but on occasion I do use Grafton Speedcontrollers. One top tip is to stay away from the ones that use L brackets to mount the pads to the arms. They have more flex and less adjustability losing both performance and functionality in some applications. If you happen to only have those, buy a pair of Shimano M730/732 (not 734) brakes and harvest the eye bolt assemblies. It’s what John did in the beginning and it’s much better than the L brackets. 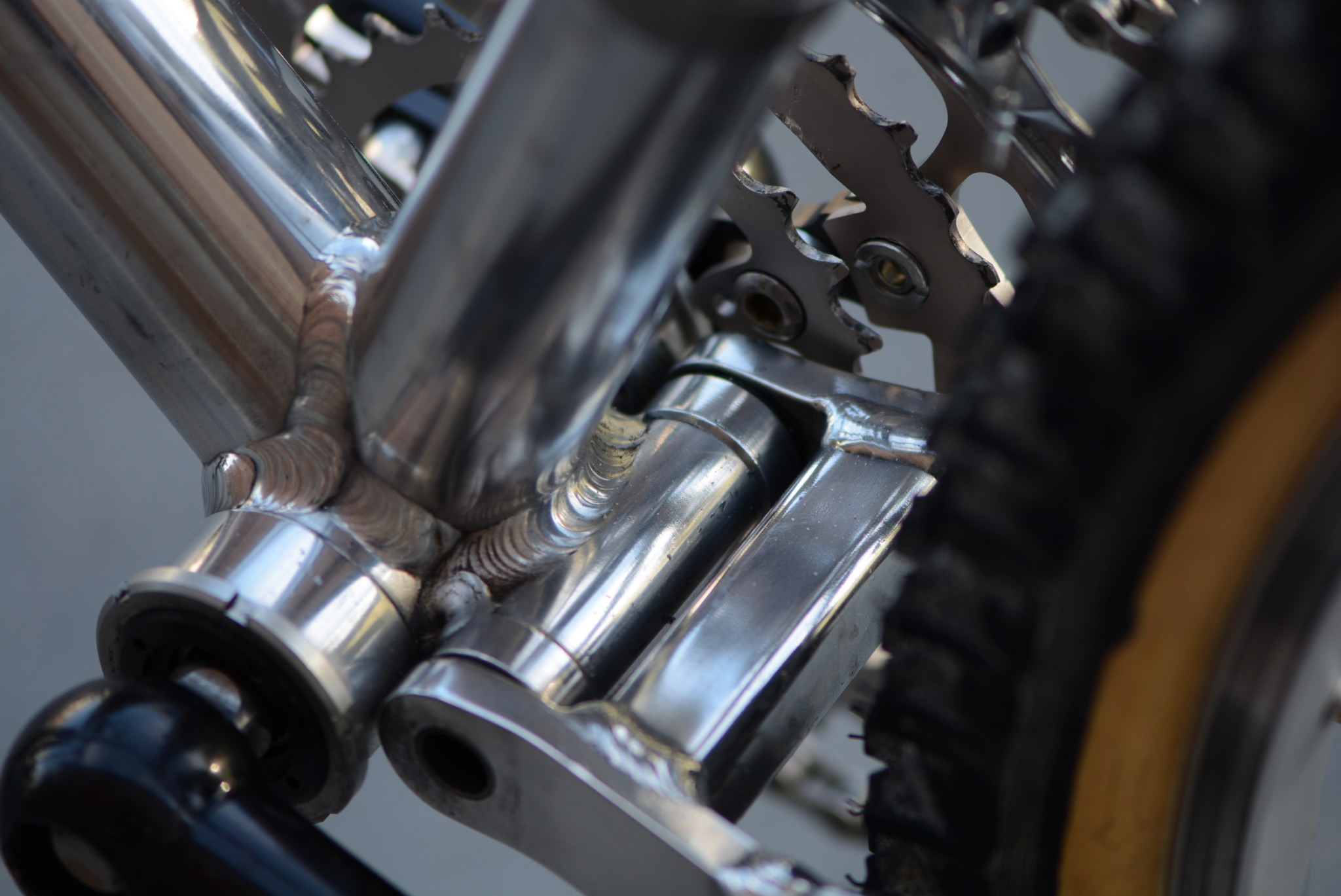 Another artifact of the early nature of this bike is the welded lower swingarm later to be replaced by a CNCd unit. 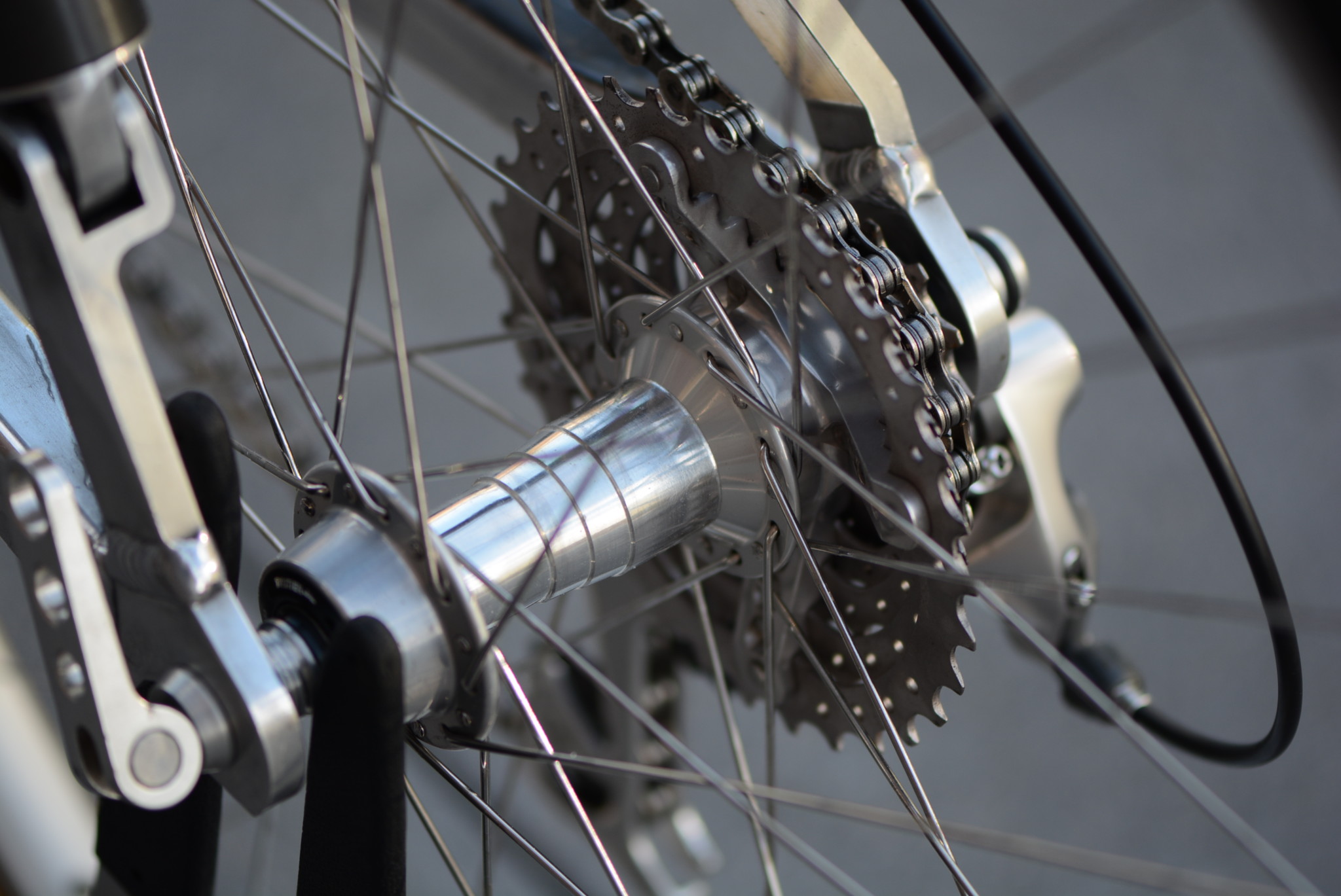 The modified M900 rear hub represents the final evolution of Doug’s design. He started by fabricating his own versions of the Hi-e/Bullseye style three piece design later taking to modifying Shimano M730/732 hubs with a single step adapter and culminating with this design, using a three step expansion adapter. 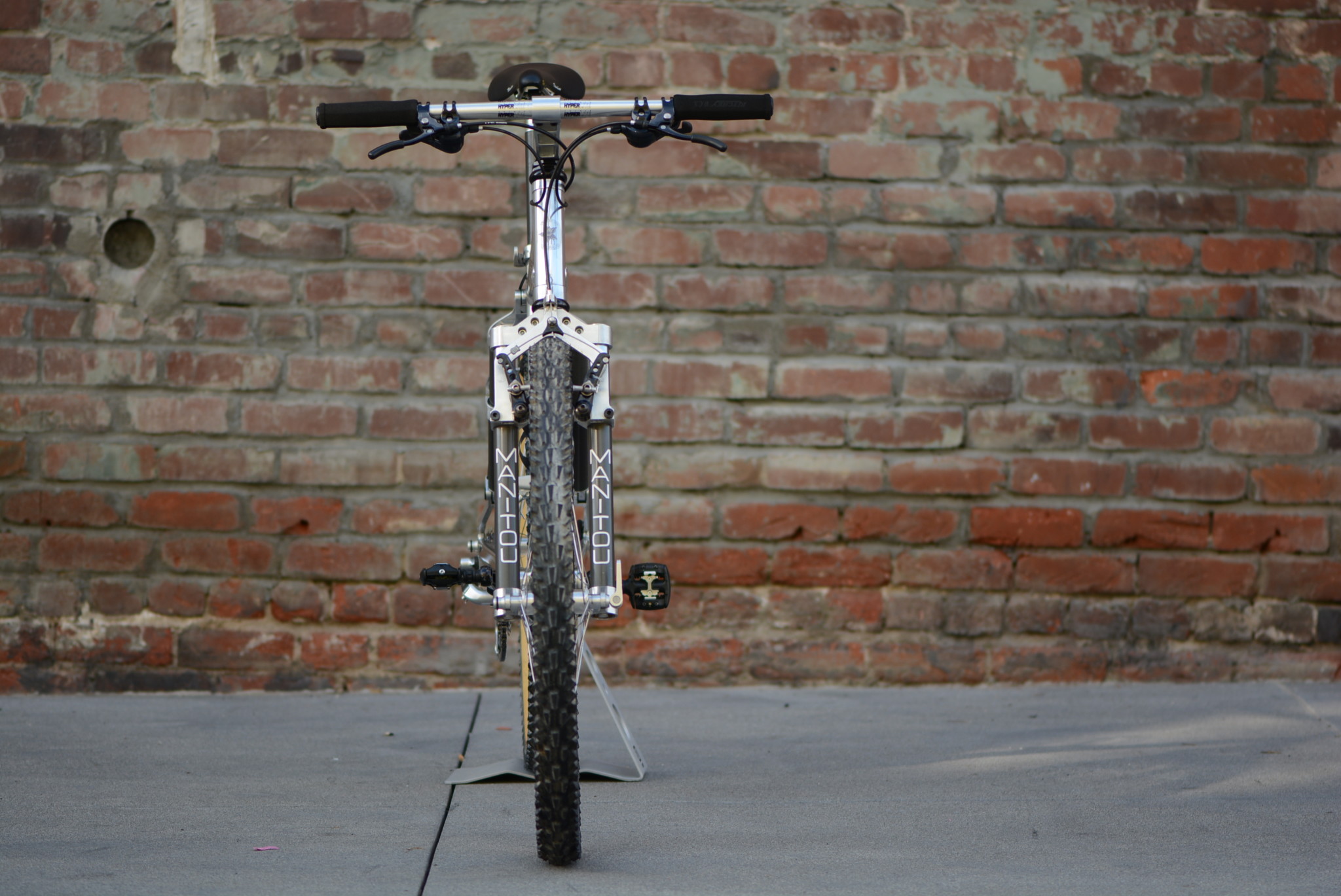 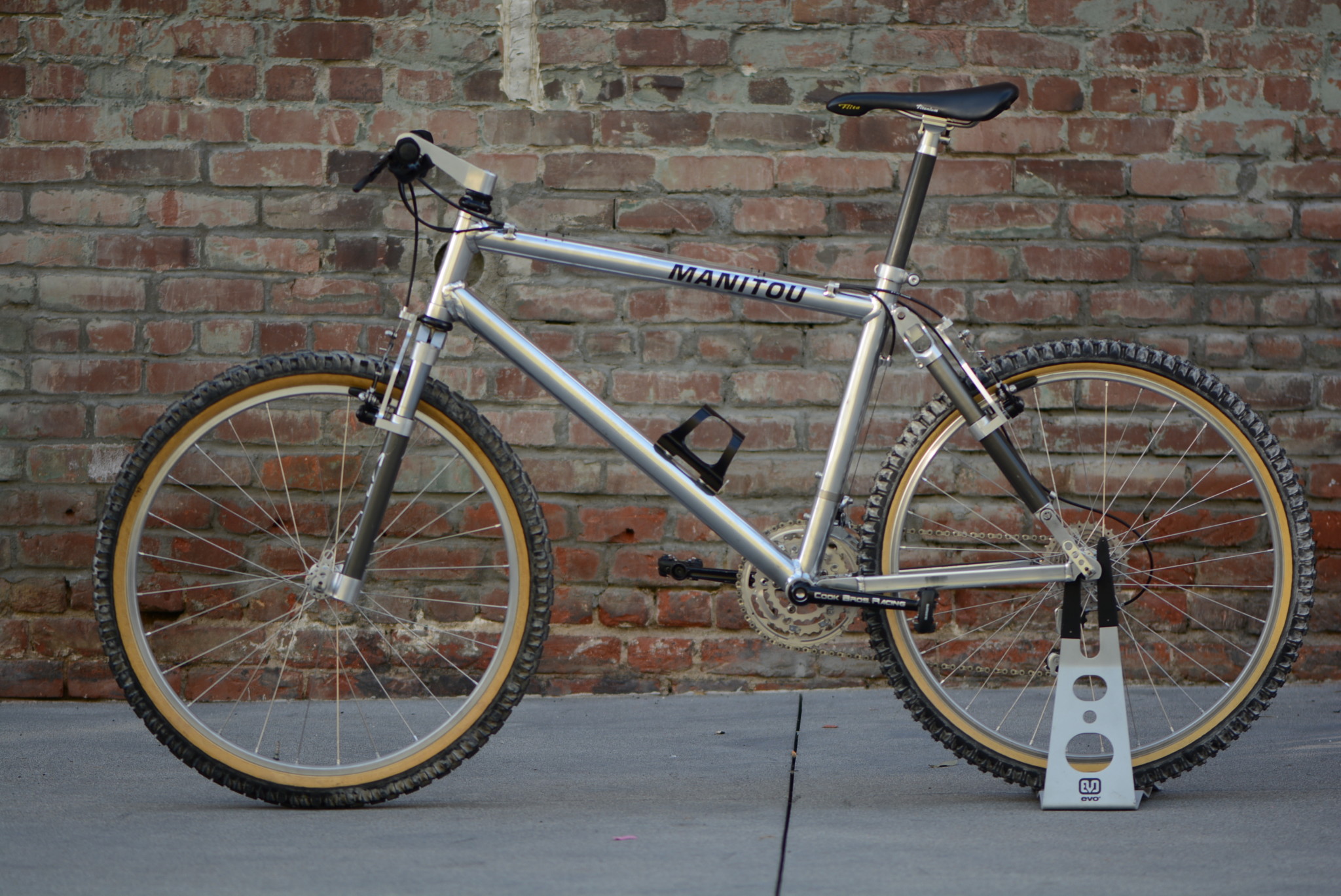 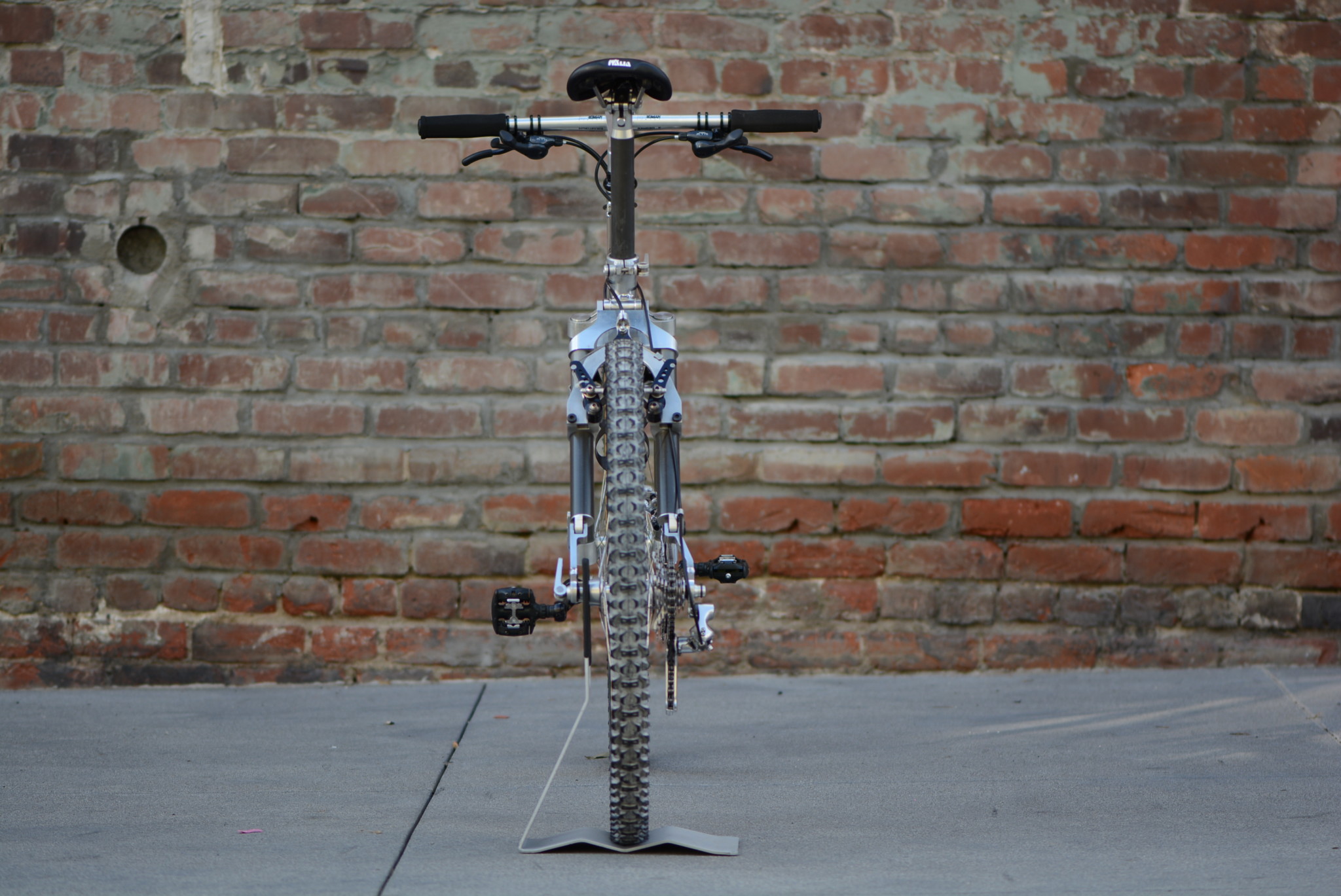 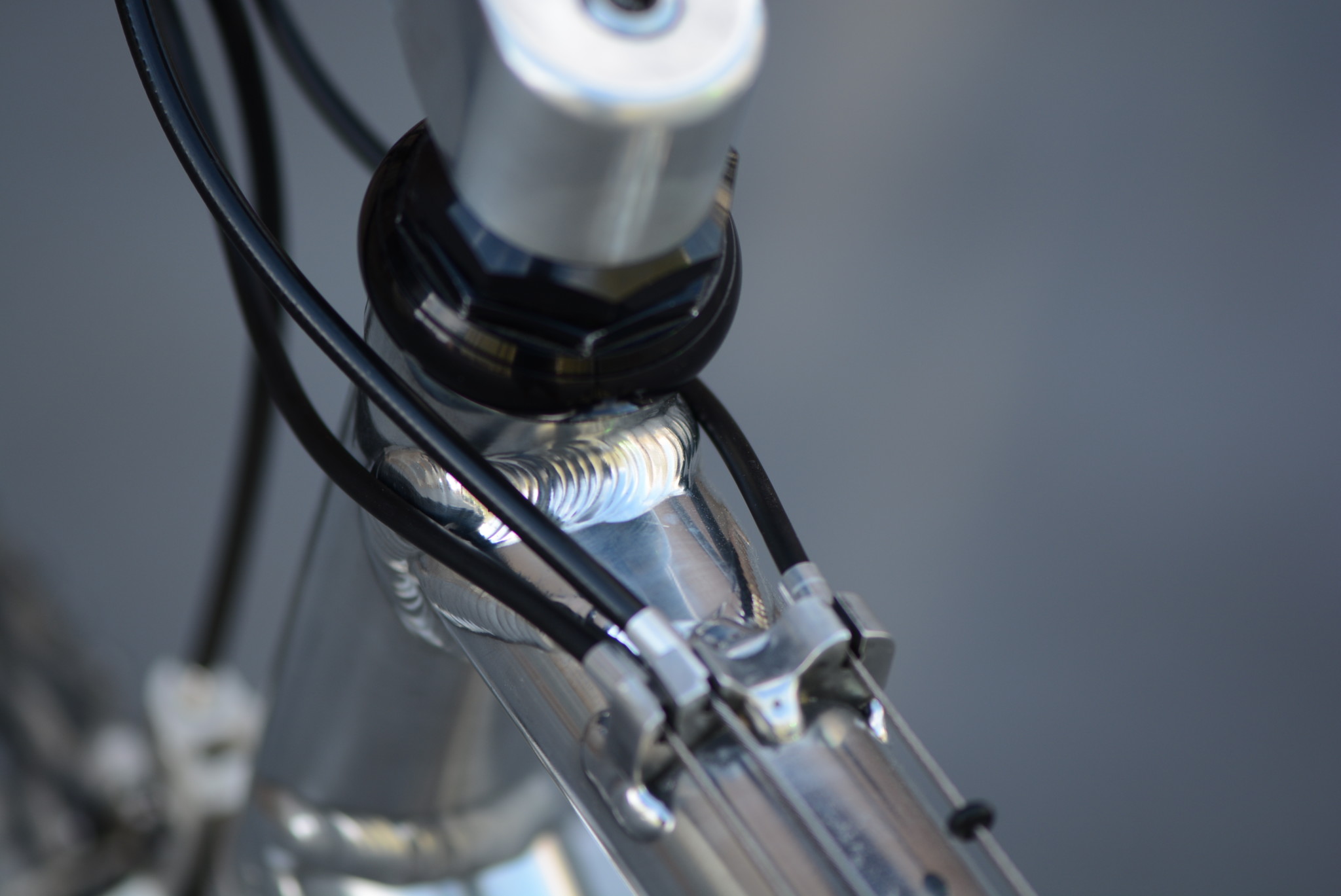 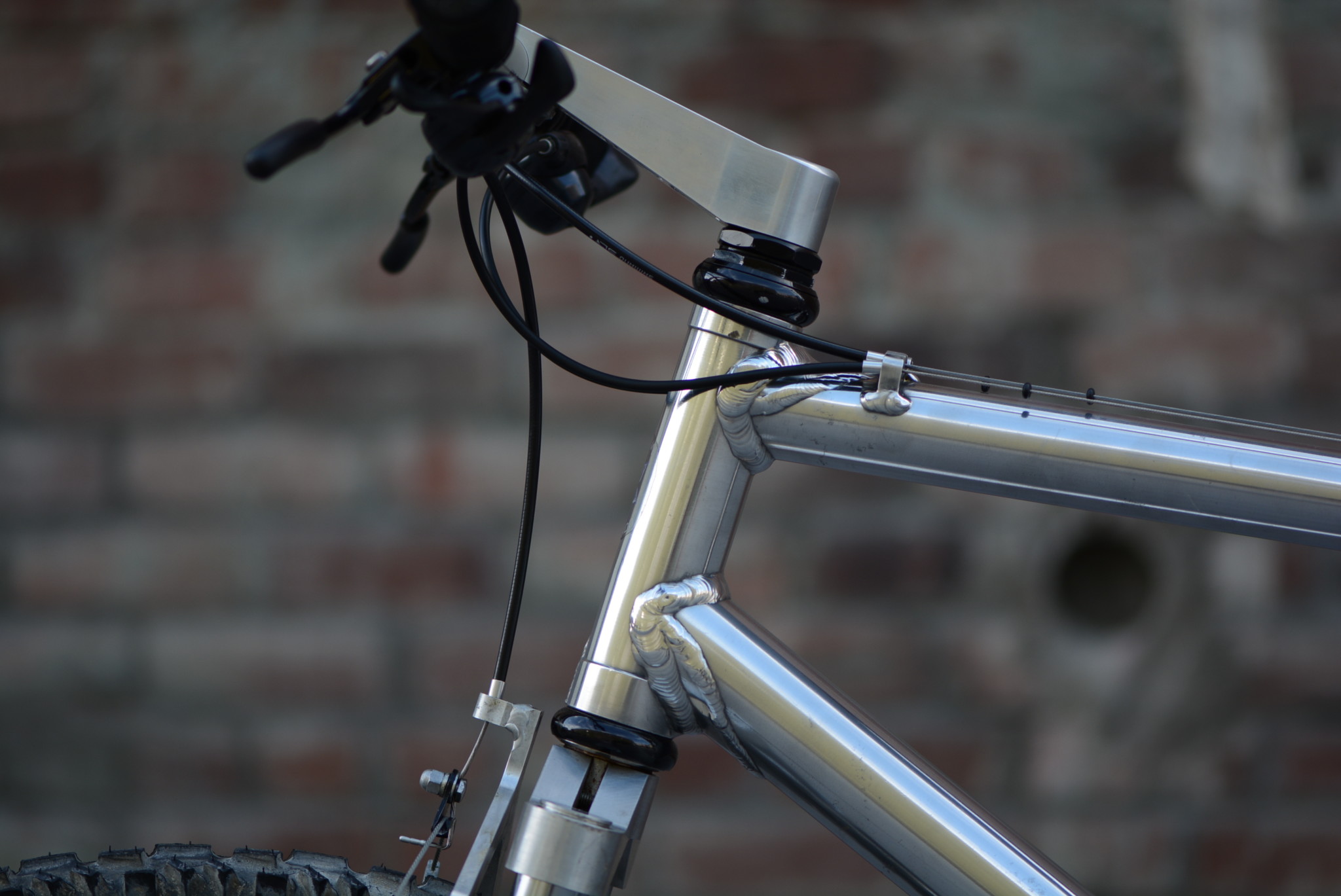 I love all the extra gussets on these bikes, they’re not as large and imposing as the earlier bikes and blend in nicely with the design. Too bad they didn’t stop the headtubes from cracking 😉 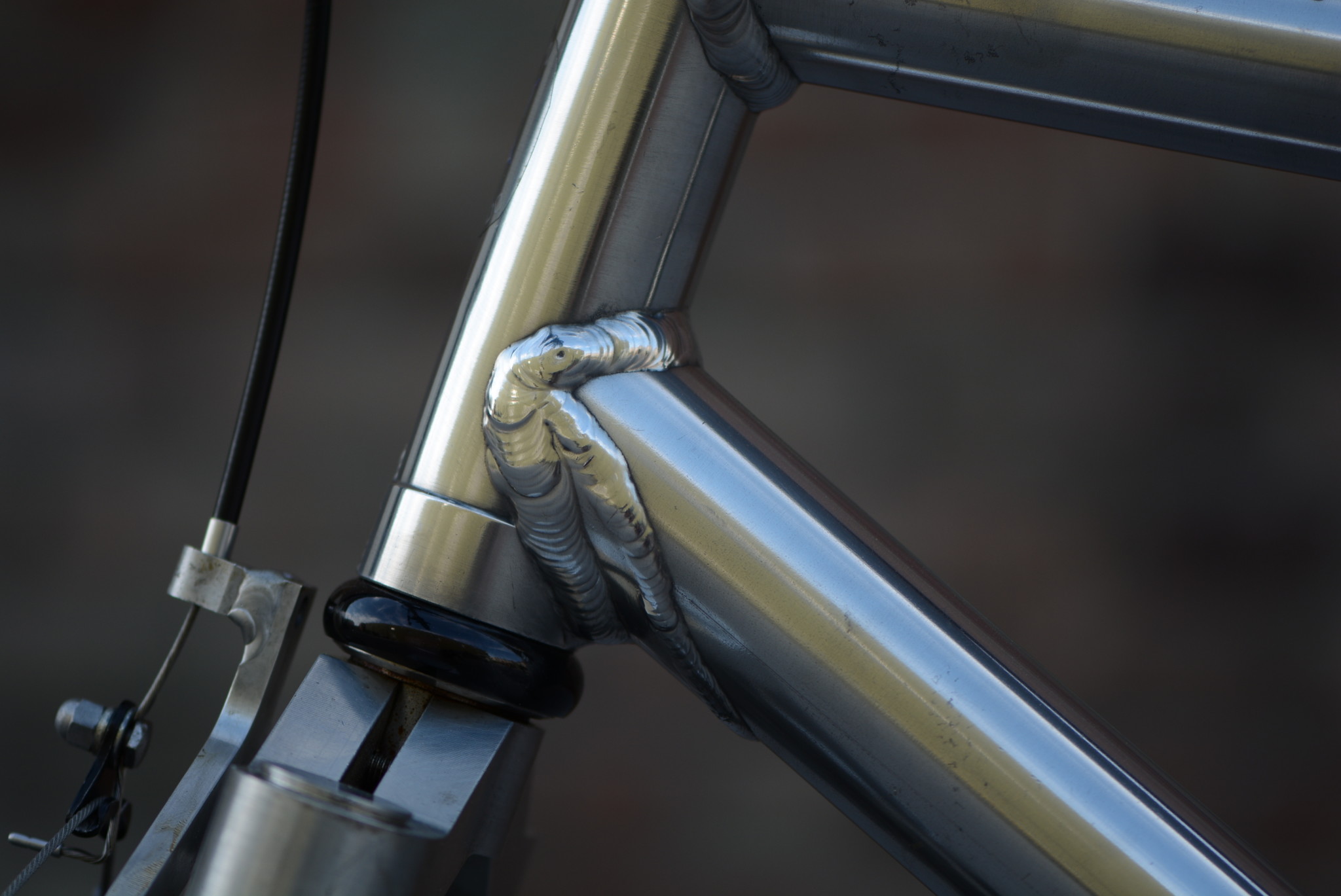 In my opinion this is really the pinnacle of Doug’s work. This bike features all of the custom design elements that were available along with the extra touches that make the frame stand apart from the later Answer made bikes. By the time he ended the run of his FS frames they were virtually the same as the Answer made bikes, Doug phased out the gussets and some of the bikes even had standard 135mm rear spacing. Though they were technically made by him, I’d wager many of the parts came off of the Answer production line. So, as far as I’m concerned this here is the bike to have if you want to have a Manitou FS and stand out at your next vintage meet. 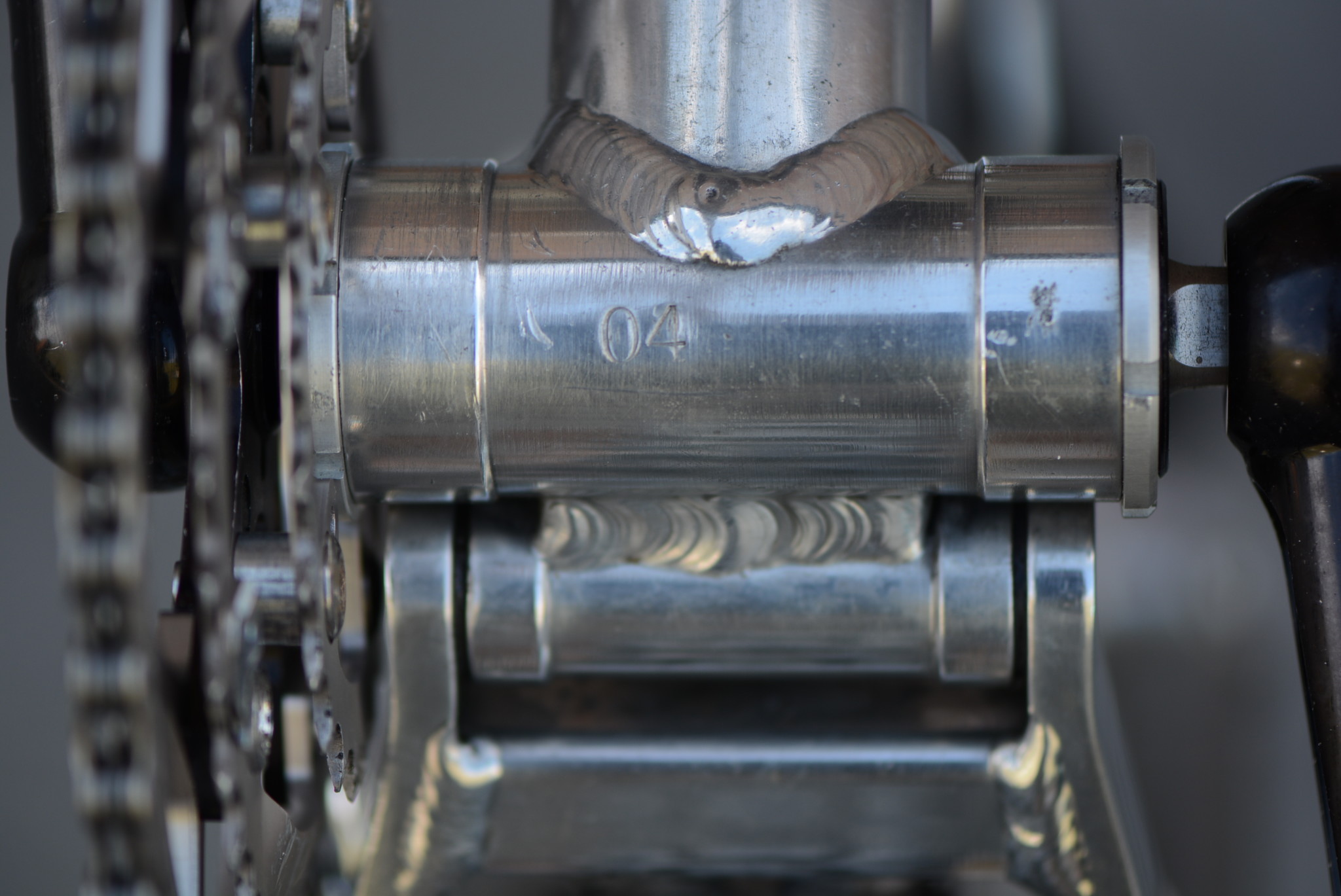