If you were anything like me and didn't live in either California or Colorado you probably didn't have much of an opportunity to see a Bradbury Manitou in anything other than the pages of Mountain Bike Action.

I still remember reading this exact magazine and dreaming about owning a Manitou. It took nearly 25 years until I got my first Manitou, which has been a cherished bike ever since it landed in my garage. Now an interesting twist of fate has landed the very bike from that 1991 MBA article in my garage. Time to play the lottery! 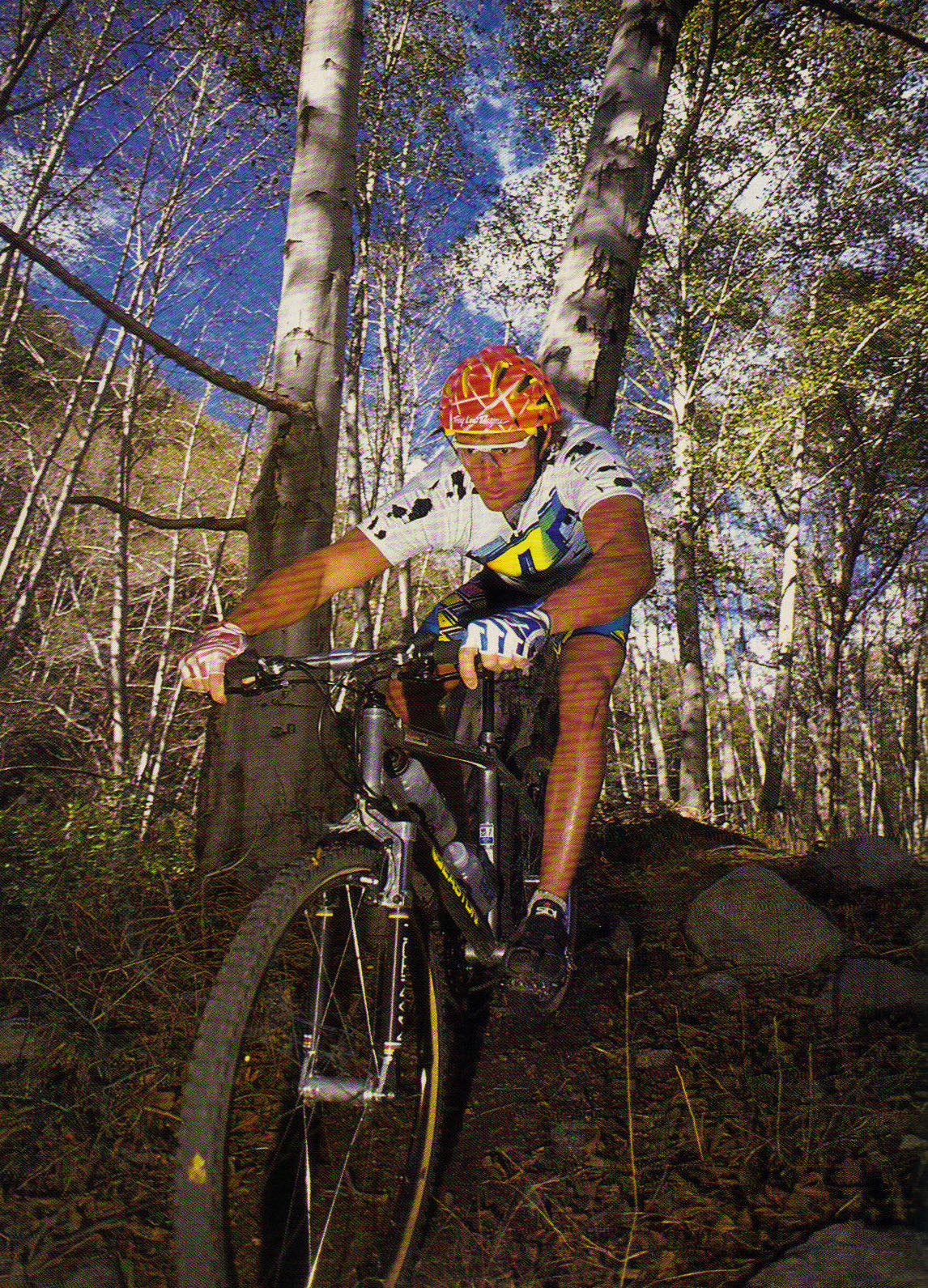 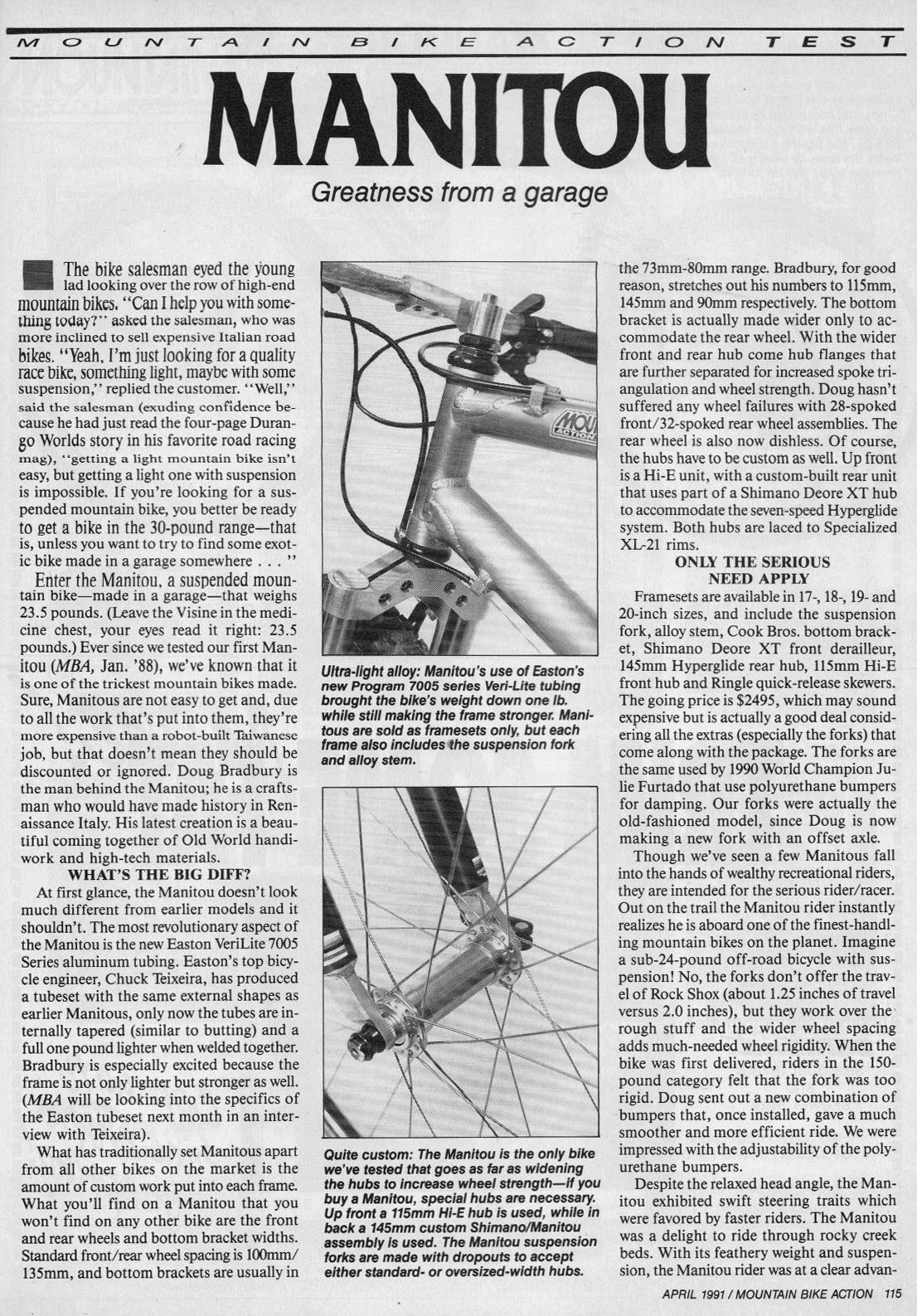 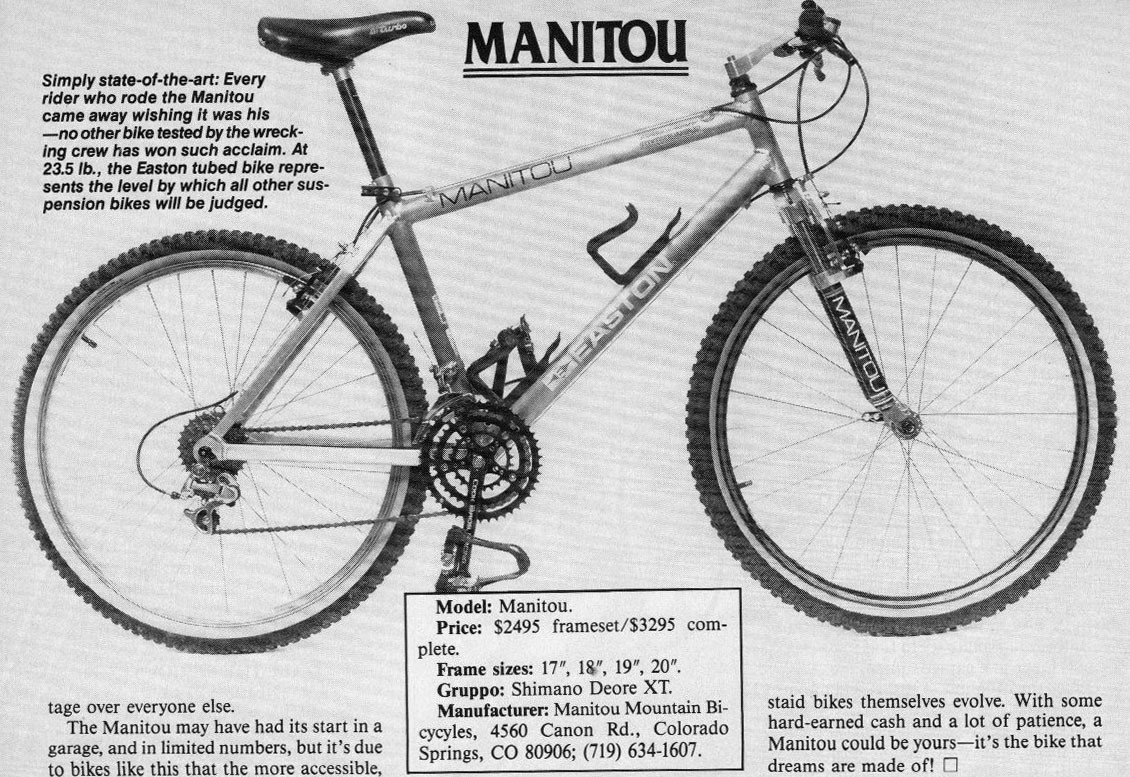 Original scan of the April 1991 issue of Mountain Bike Action. They nailed it at the end, patience was the key!!! 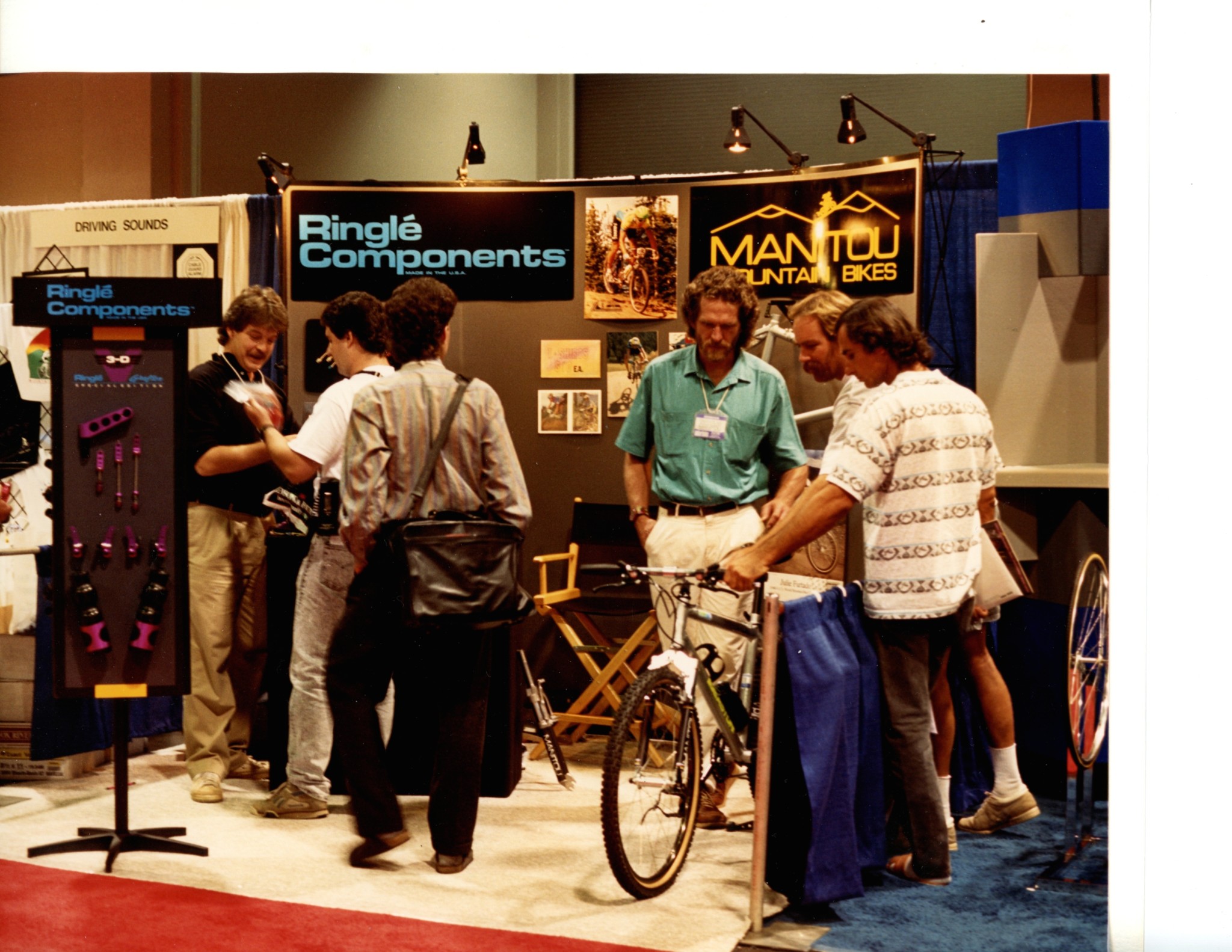 The same bike was displayed at the 1991 Interbike show 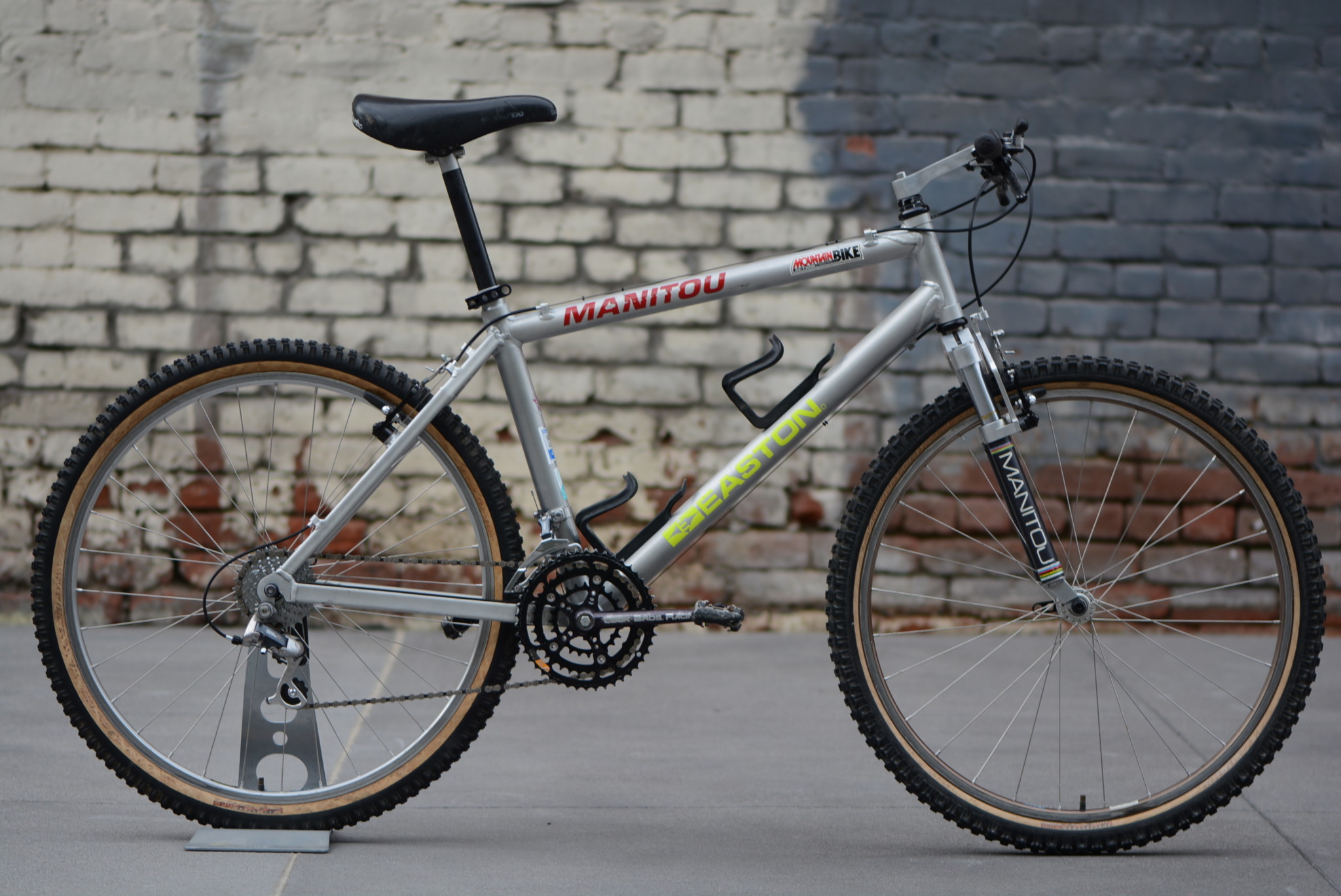 This is what a proper, high end race bike looked like back in the early 90s. “Slack” front ent, 1.5″ of plush elastomer driven suspension travel, Grafton brakes, Cook Bros cranks and Shimano XT drivetrain. This really is about as good as it got!! 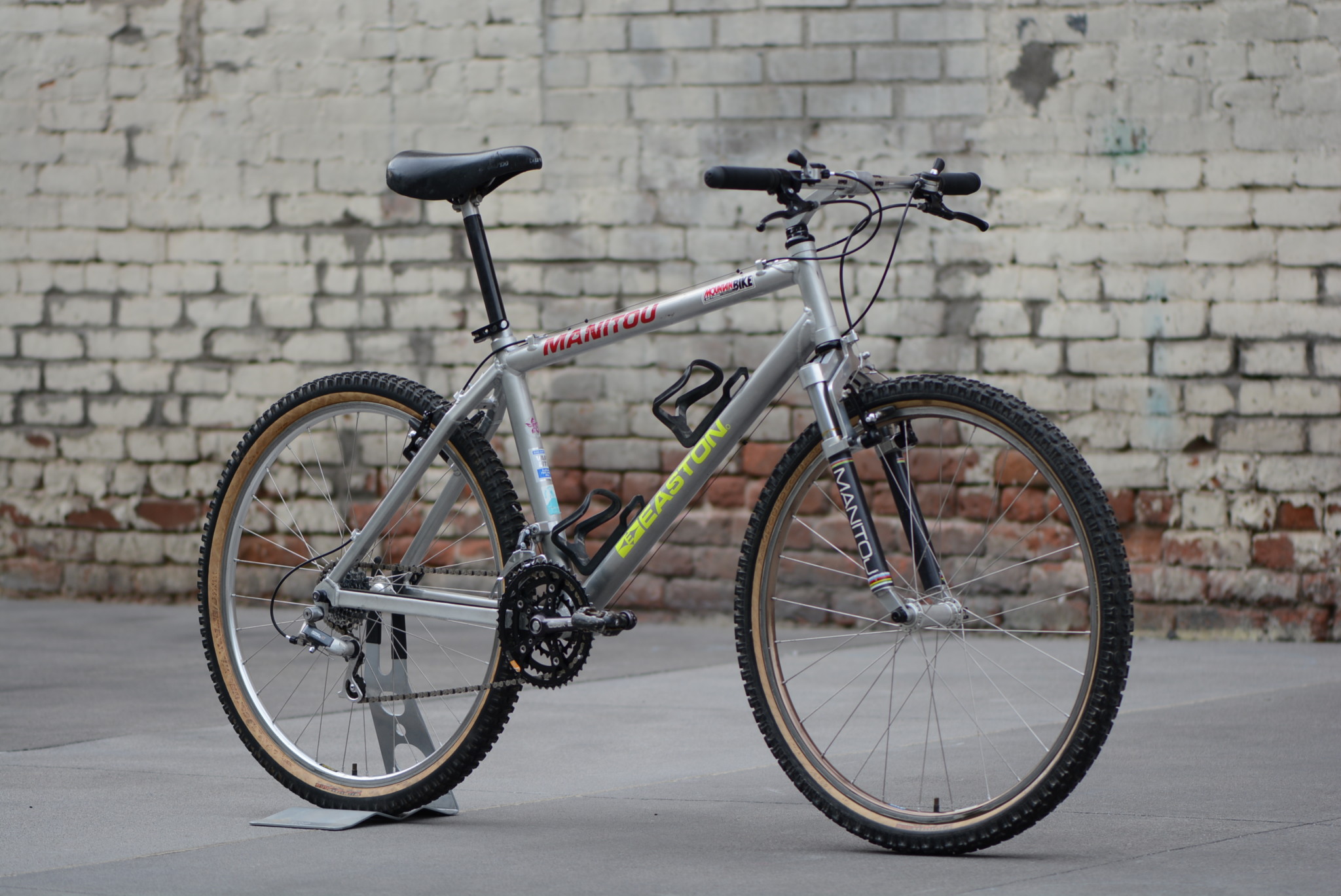 According to the magazine writeup this was one of the first Manitous made with Easton 7005 series Variolite tubing. I’m not actually convinced that this bike is made entirely from 7005 and actually believe it’s mostly 6061 perhaps with 7005 series top and seat tubes. I spoke to Doug about it and while he did recall that there was a transition period when Easton didn’t have all the tubing profiles Doug used in his design and so hybrid bikes were made and this could be one of them. 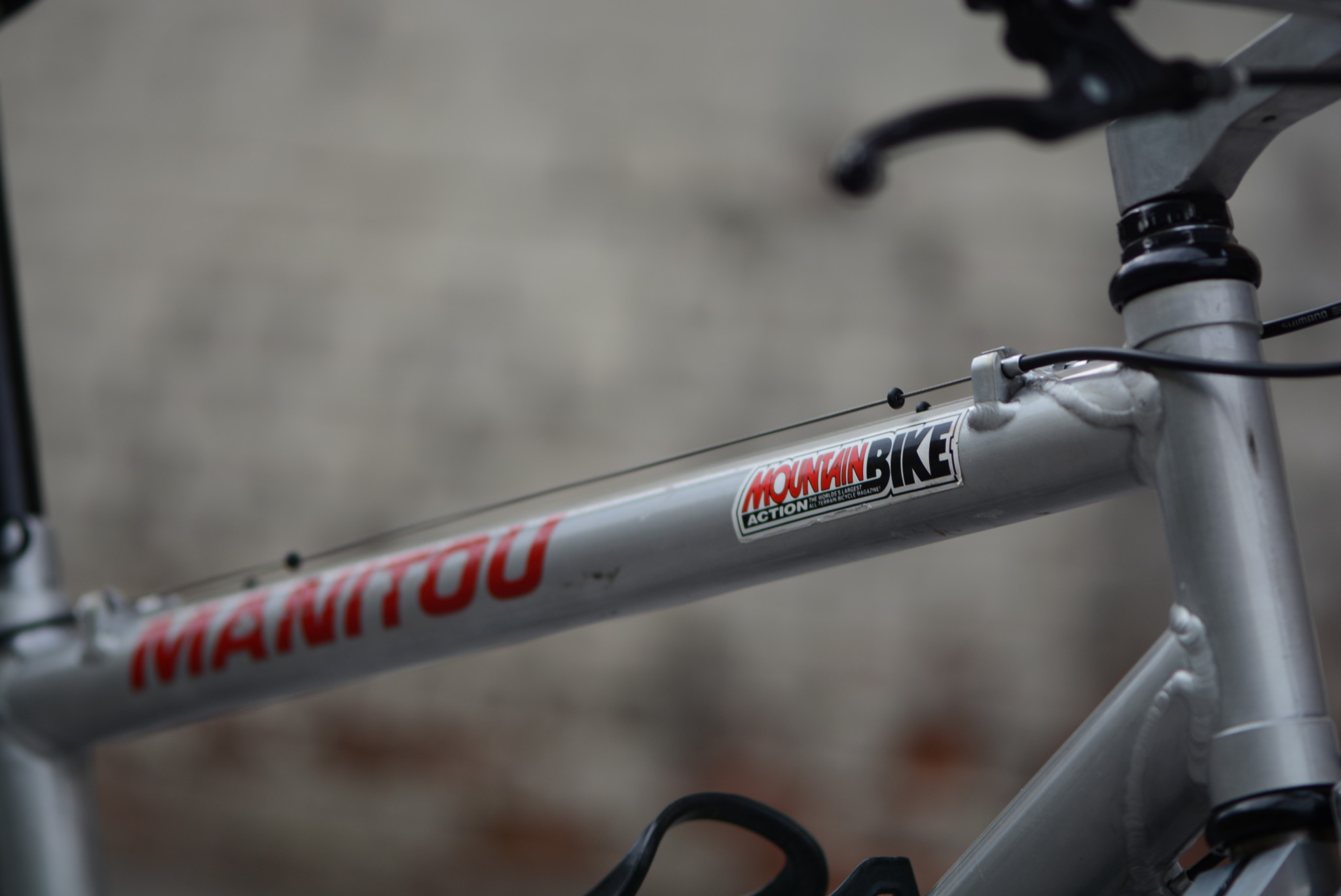 This bike is really unique in that it’s one of the only Manitous with a brushed and clear coated finish, one I quite like and may do on one of my personal bikes. 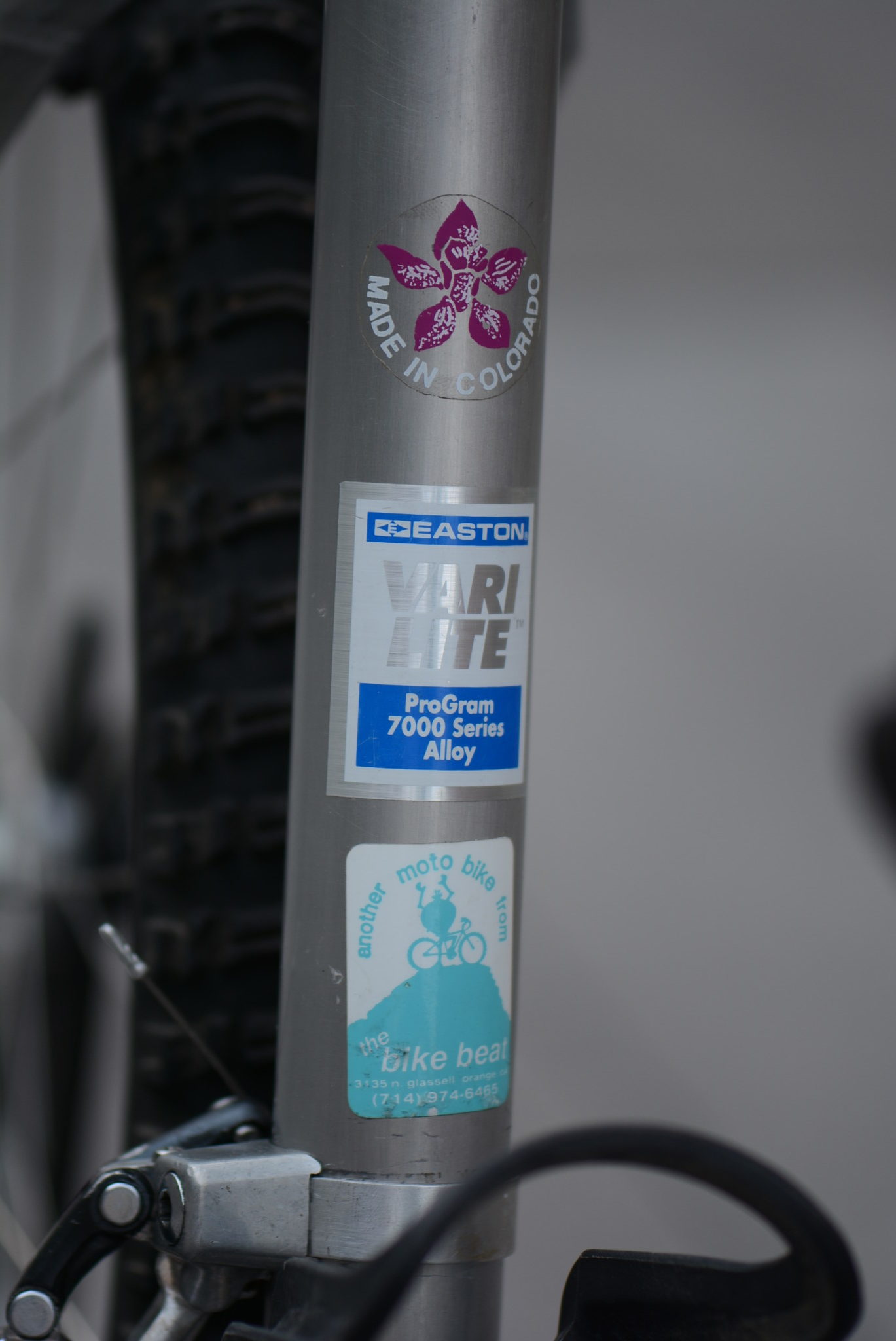 Bike Beat in Orange County was one of the premier bike shops in the country and certainly the Los Angeles. There was a close relationship between MBA and Bike beat and according to Doug many bikes that were sent to MBA for test reviews came back adorned with Bike Beat decals. 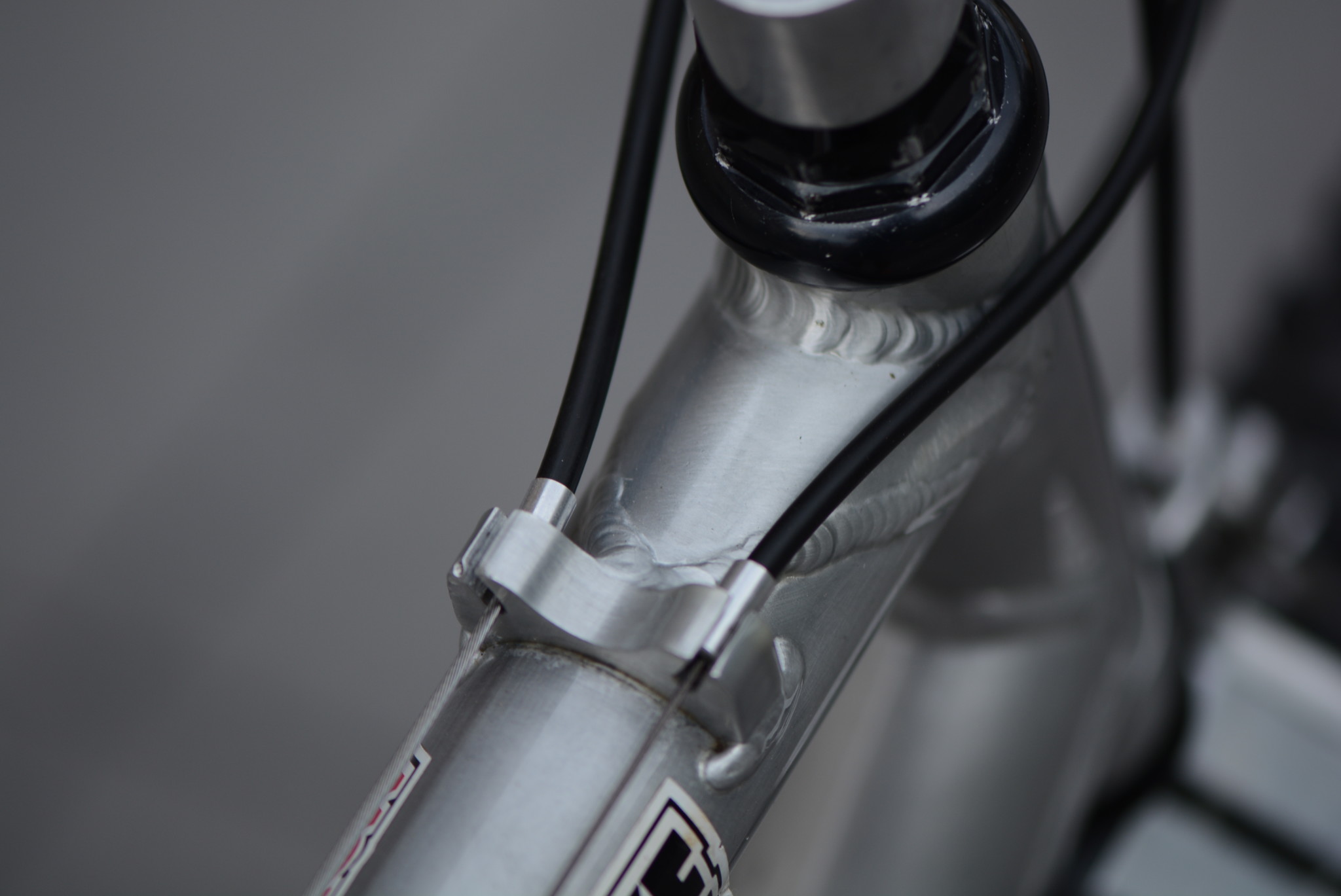 This gusset is the only indication that perhaps the top tube and maybe downtube are made of Easton tubing. The traditional 6061 gussets were much larger whereas this one is not as built up and looks like the gussets on the later Easton made bikes. 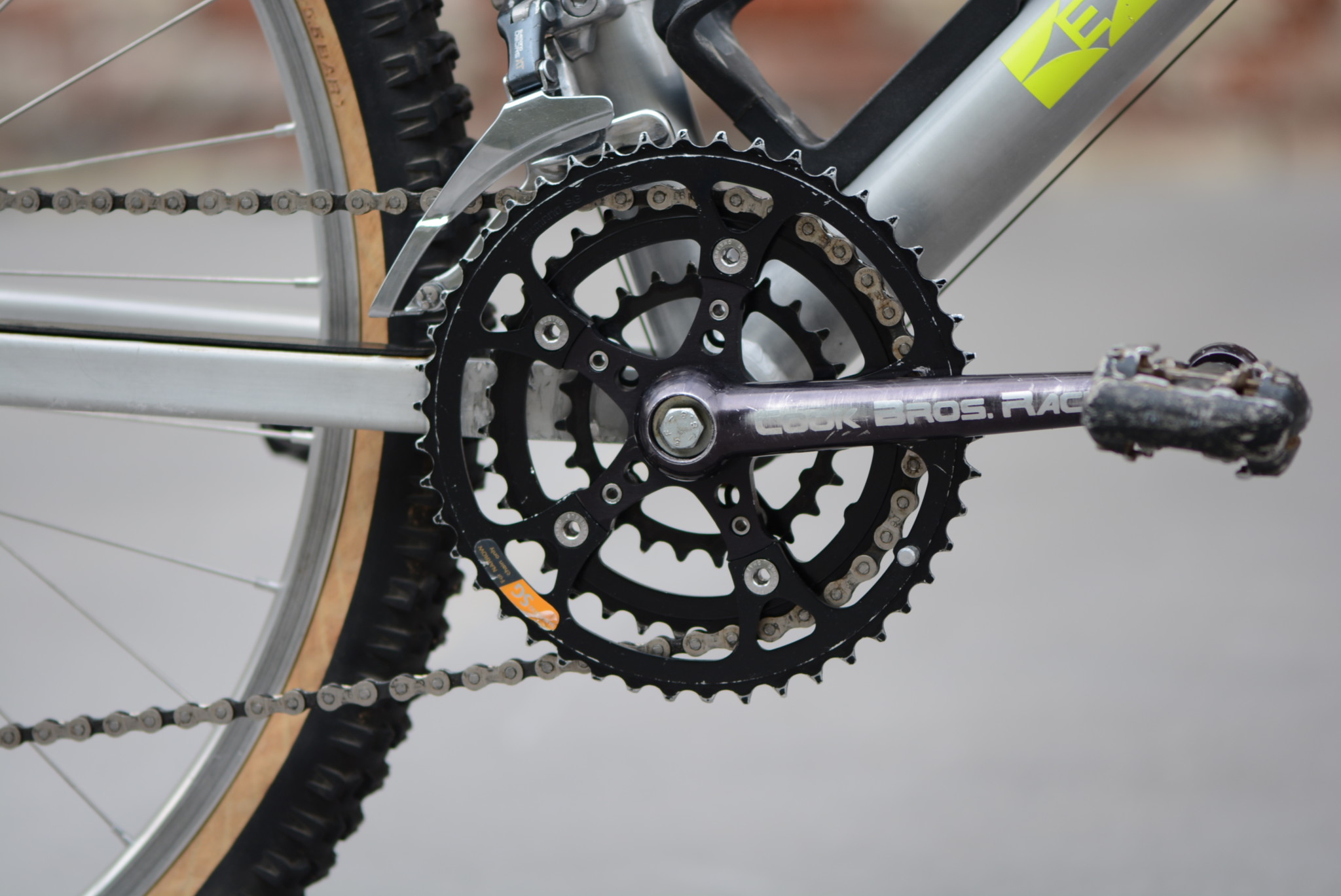 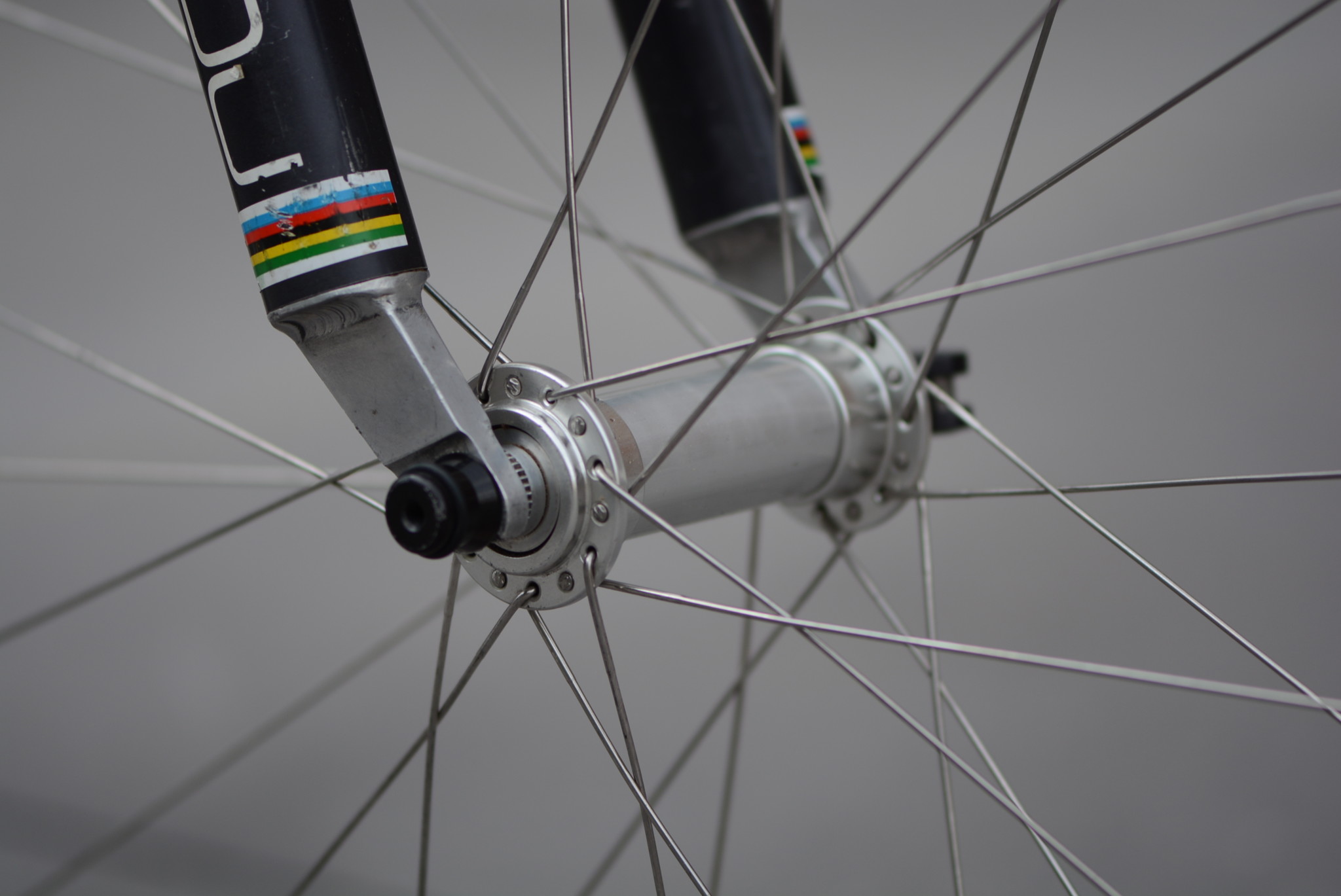 World Championship stripes were earned by Juli Furtado in 1990 riding her Yeti C-26 with an earlier prototype of this fork! 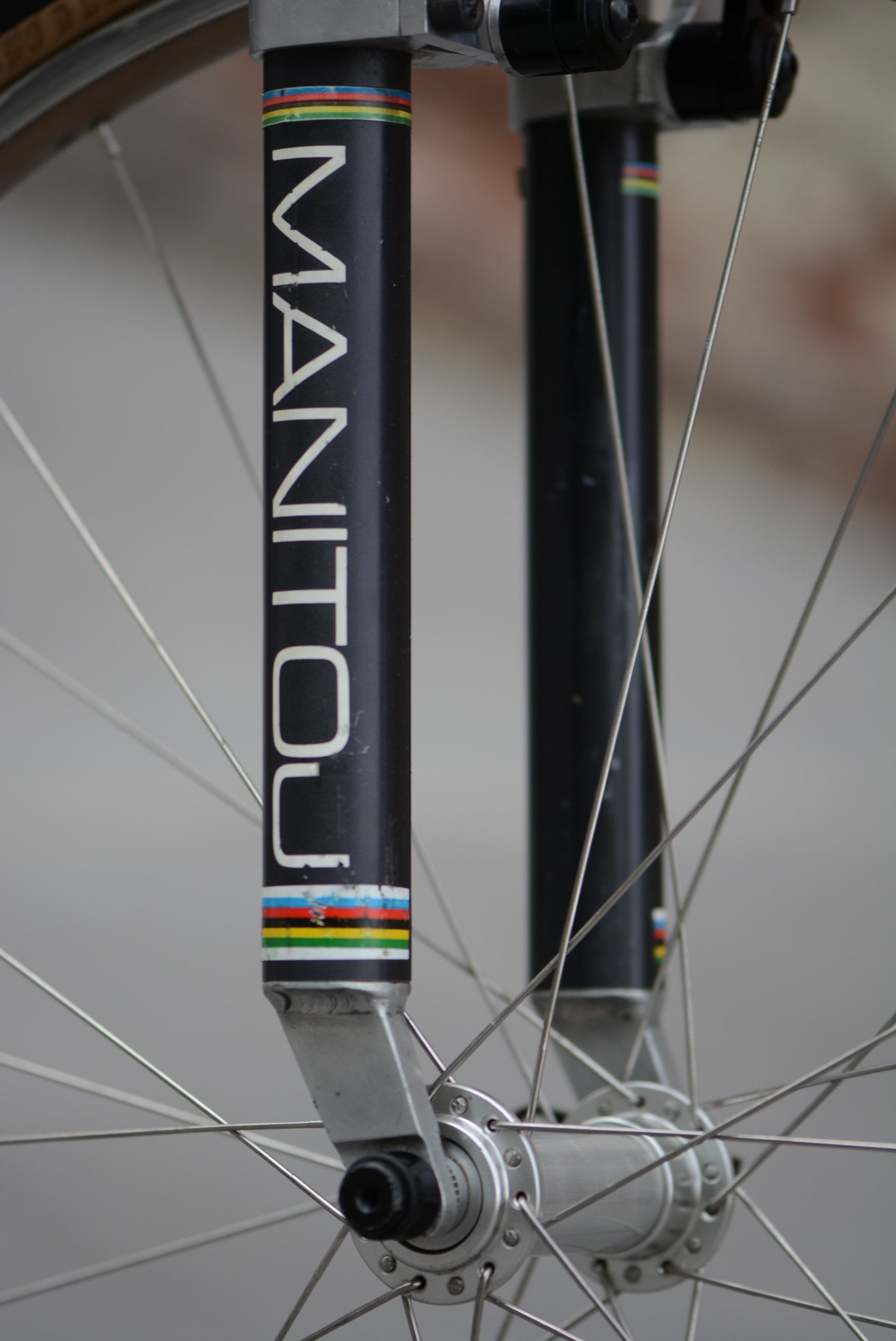 The fork on this bike is what I refer to as a first generation Bradbury Manitou fork. The most unique aspect of its design rests in the implementation of the offset dropouts, which are of course 115mm wide!! 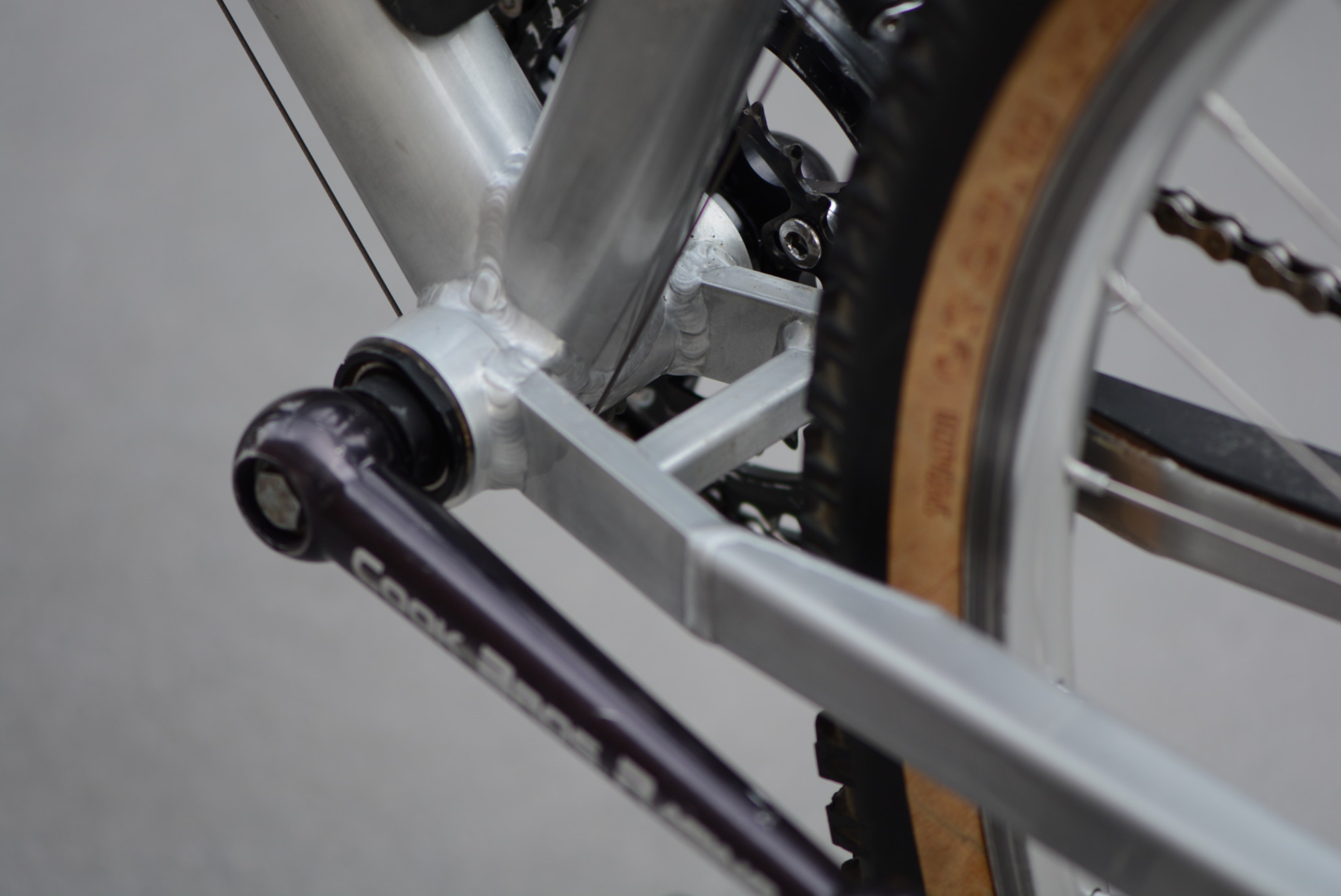 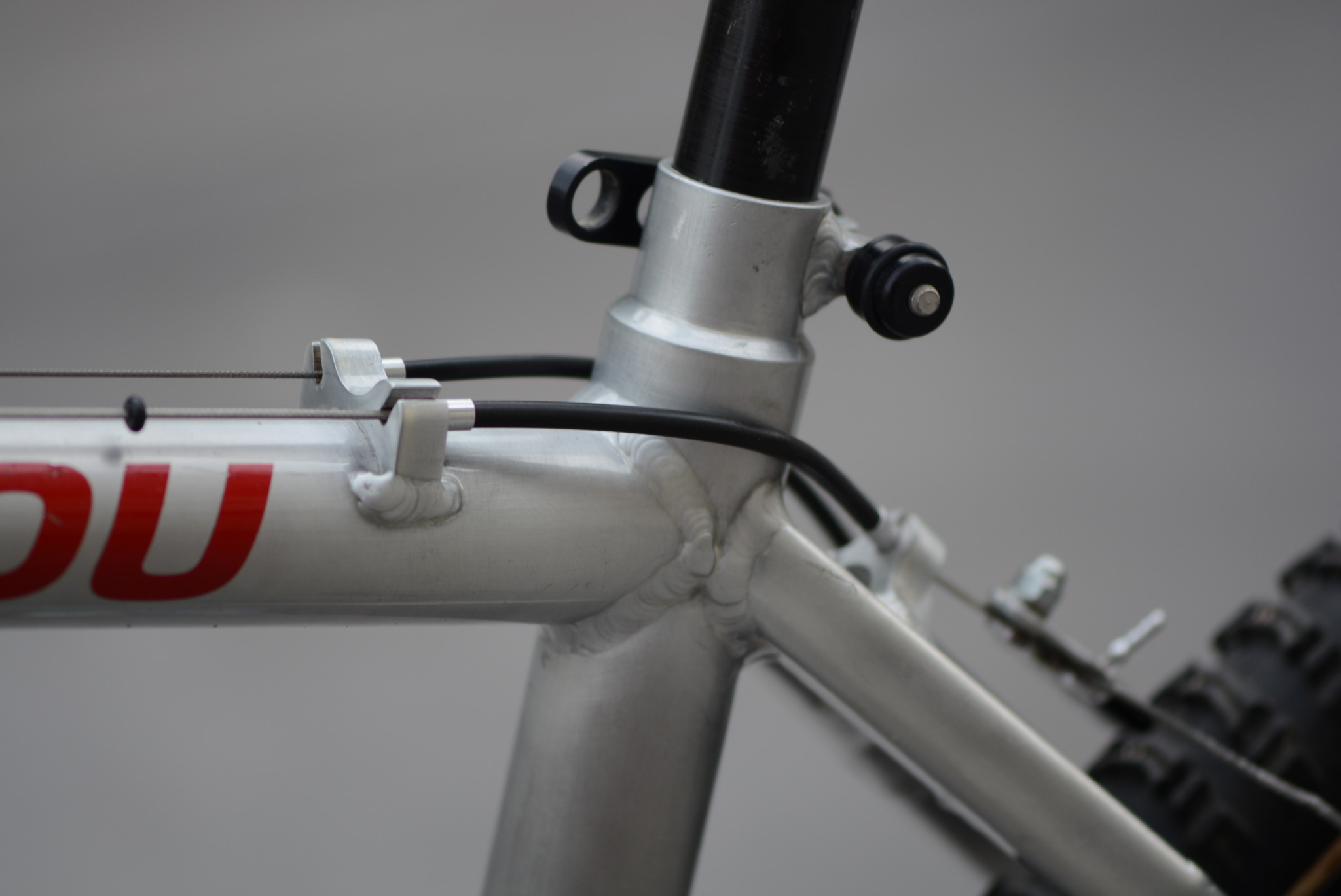 The features on this bike like the large diameter seat tube with a reducer to 26.8, moving away from a sleeved down tube and the solid plate chainstay to bottom bracket joint are characteristic of a late 1990 and early 1991 frame. I am not 100% sure which number this bike is, but Doug built a bike for Bill at bike Bike Beat in early 1991 which was number 176 and there is note in the build log that indicates that Easton tubing was used after that bike. So, although Doug believes this bike was built only for the test and specifically made to fit Zap from MBA it may have been sent to Bike Beat for assembly and thus recorded that way in the ledger, but there is no way to confirm that. Bike #175 was also annotated with an (EASTON) comment and was logged under Cambria bike (another major bike shop in California. 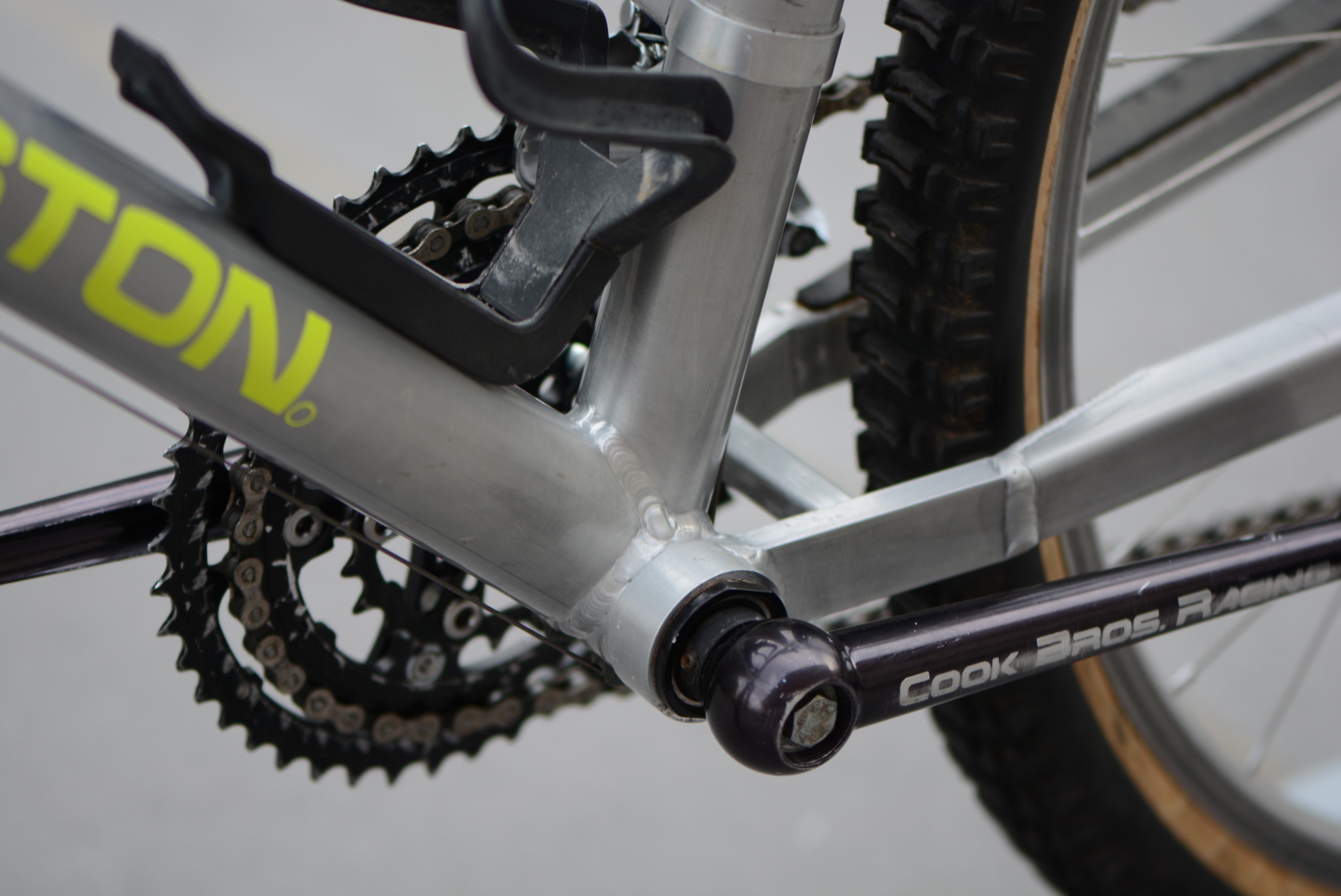 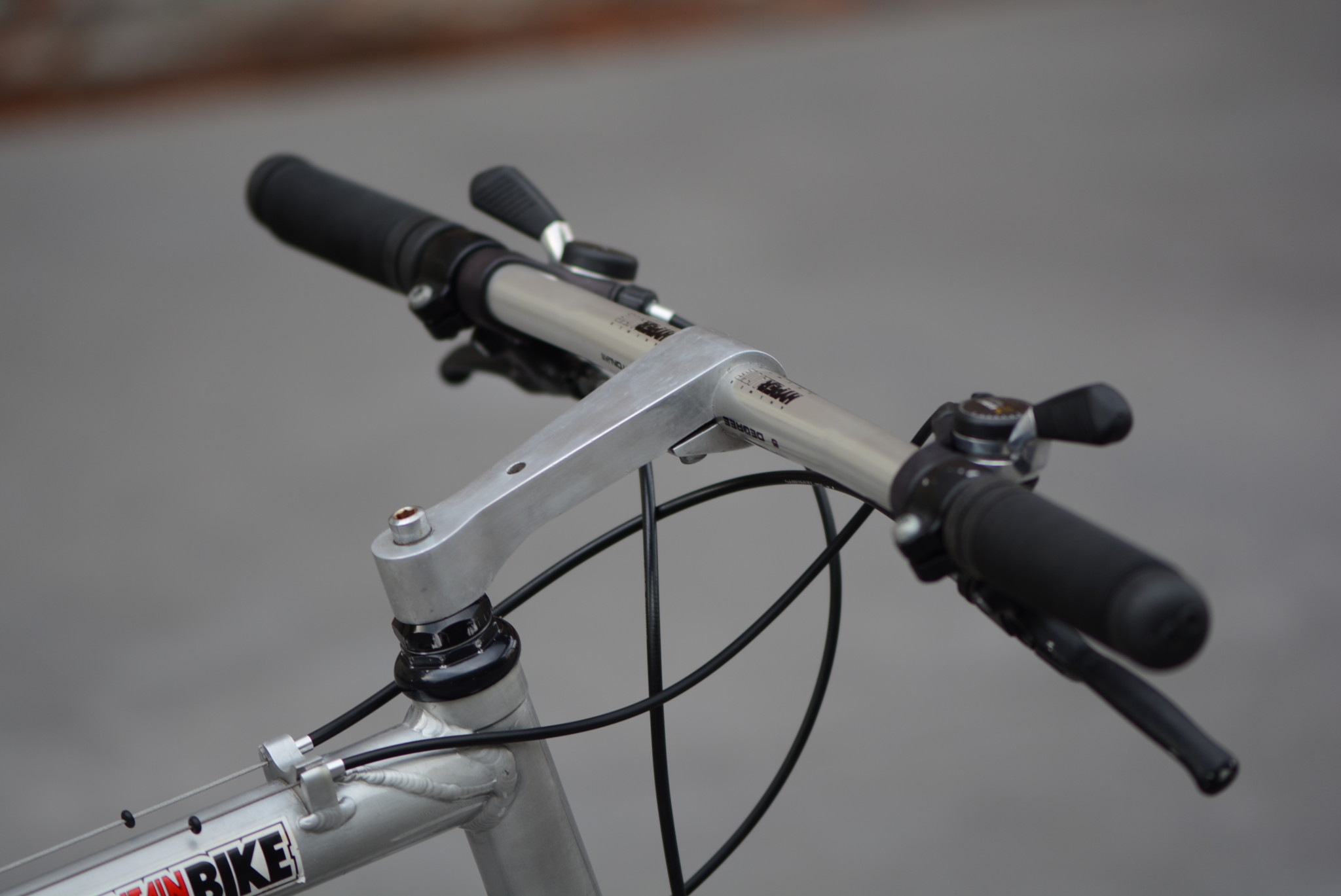 The bike originally came with a custom anodised Hyperlite bar which was really badly faded so I substituted in a plain silver one. 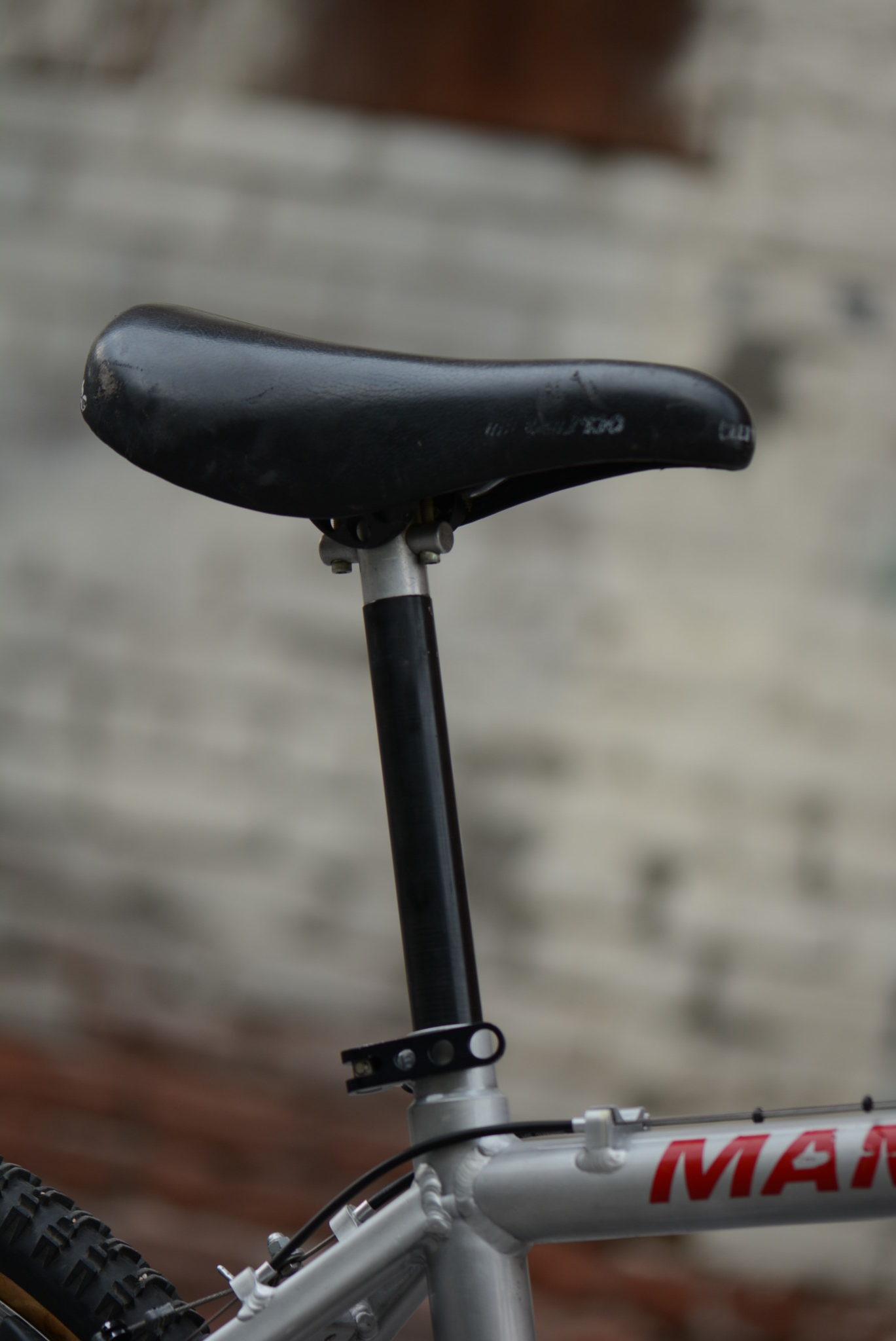 Another cool touch is the split anodised IRD post. It’s not a major thing, and I’m sure you could get it, but it’s rather uncommon to see a black post with a silver head or vice versa, it makes the bike stand out just a little bit more. 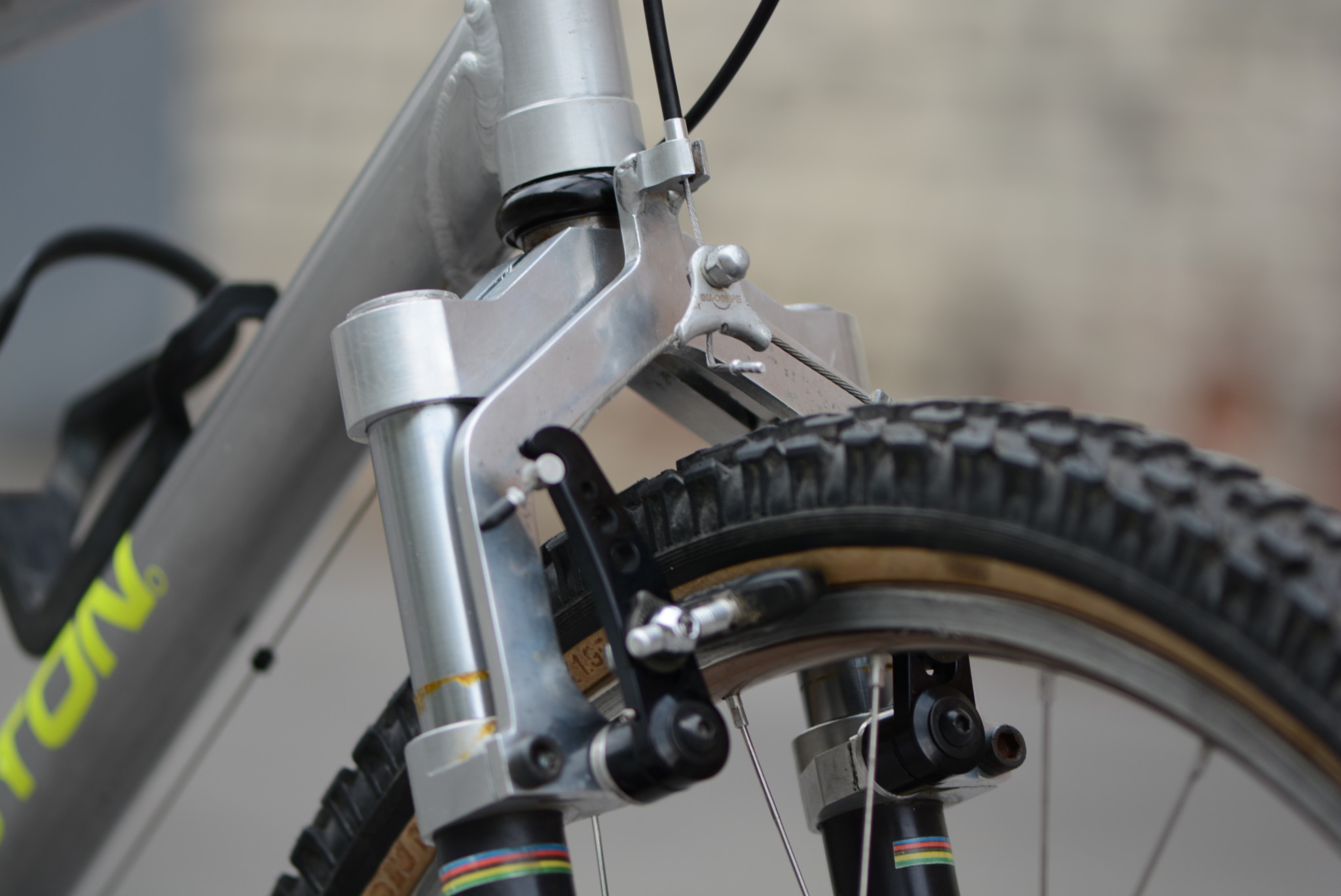 All the exposed Aluminum on this particular fork were polished to give the bike a little bit of extra appeal. 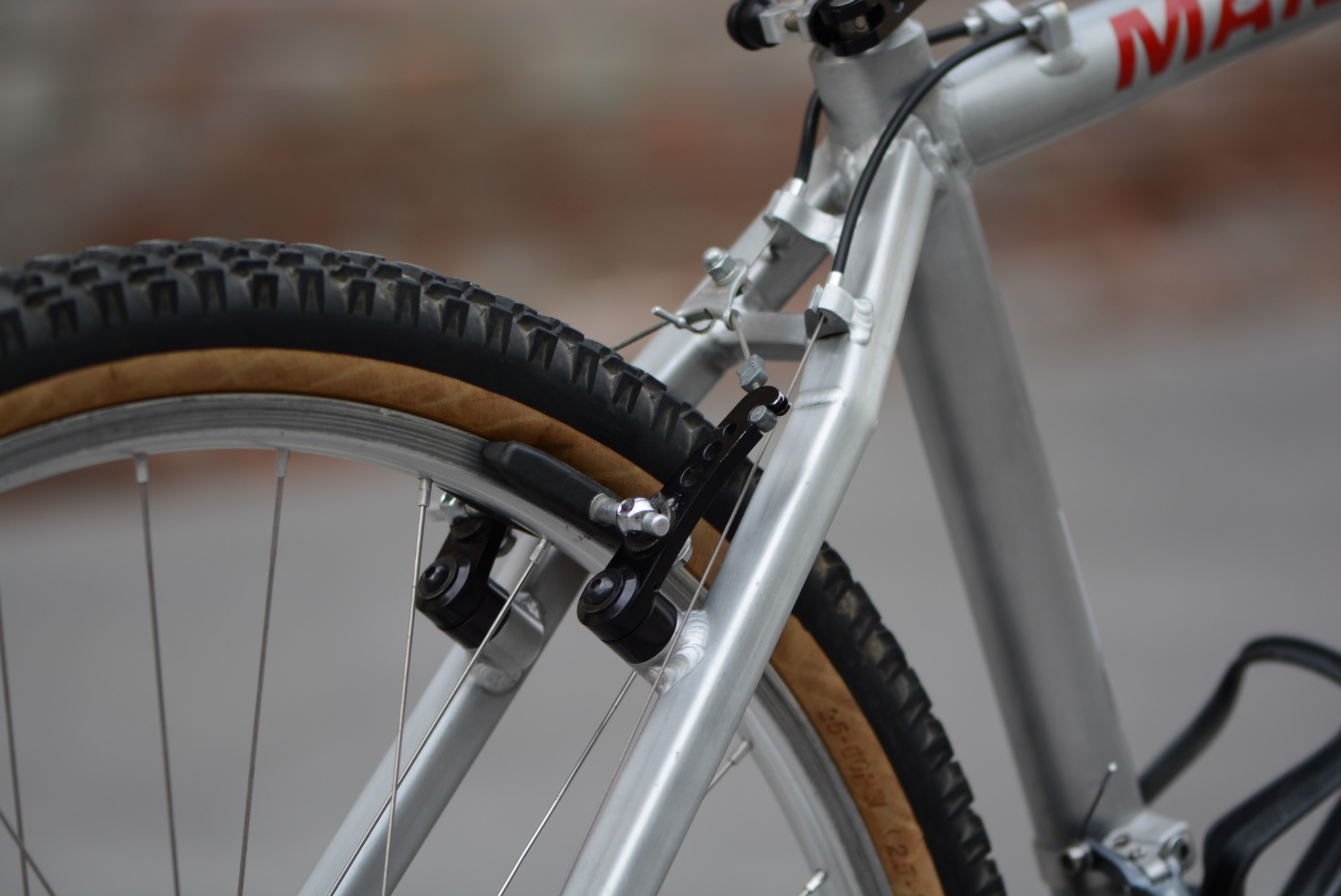 Grafton brakes, Ringle QRs were common on the early Manitous as Doug, John Grafton and Geoff Ringle had a close working partnership and cross promoted the brands. 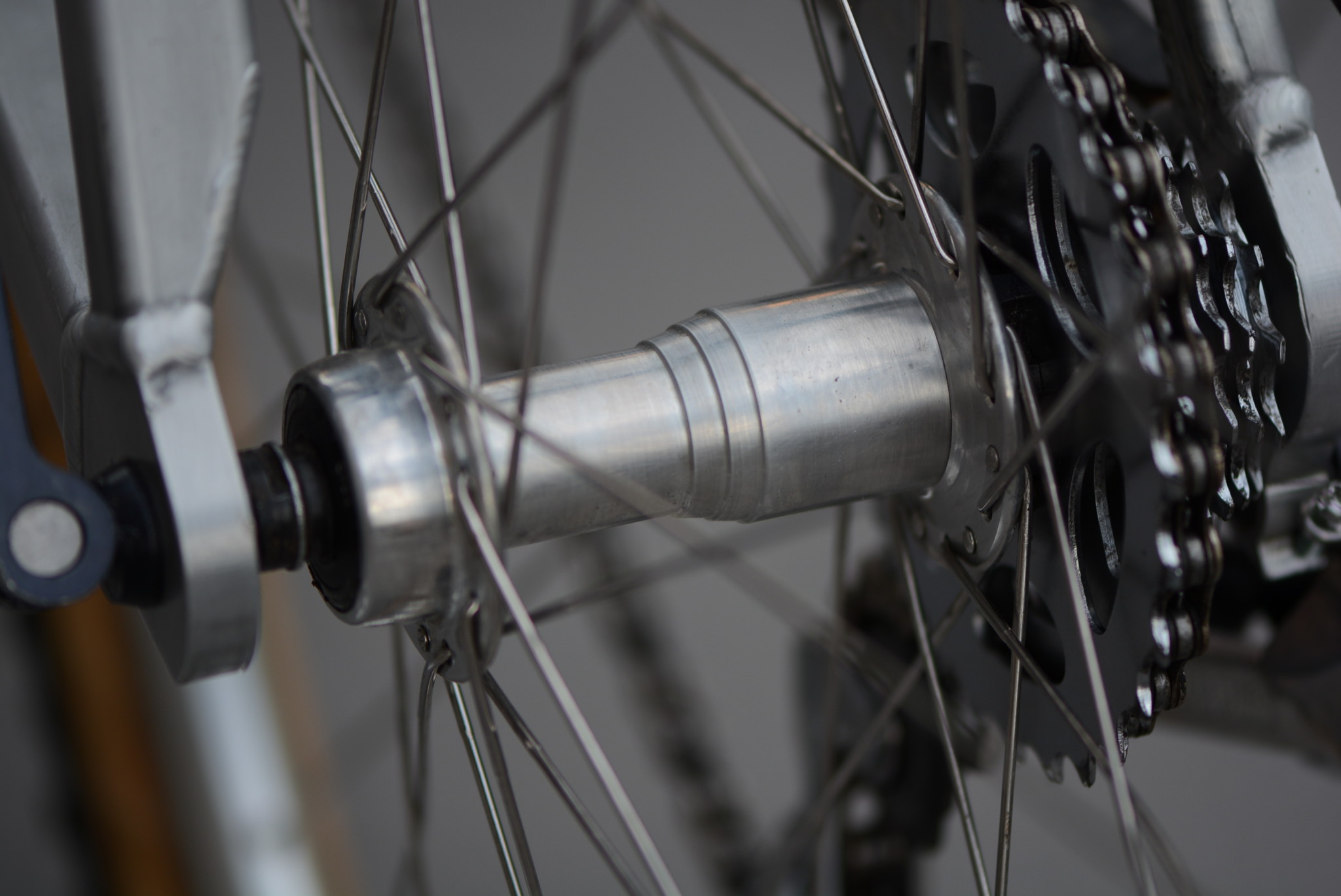 Custom modified Shimano XT rear hub to allow Doug to run a dishless, 145mm rear wheel for extra strength. This design became the standard on all Manitous until the end. 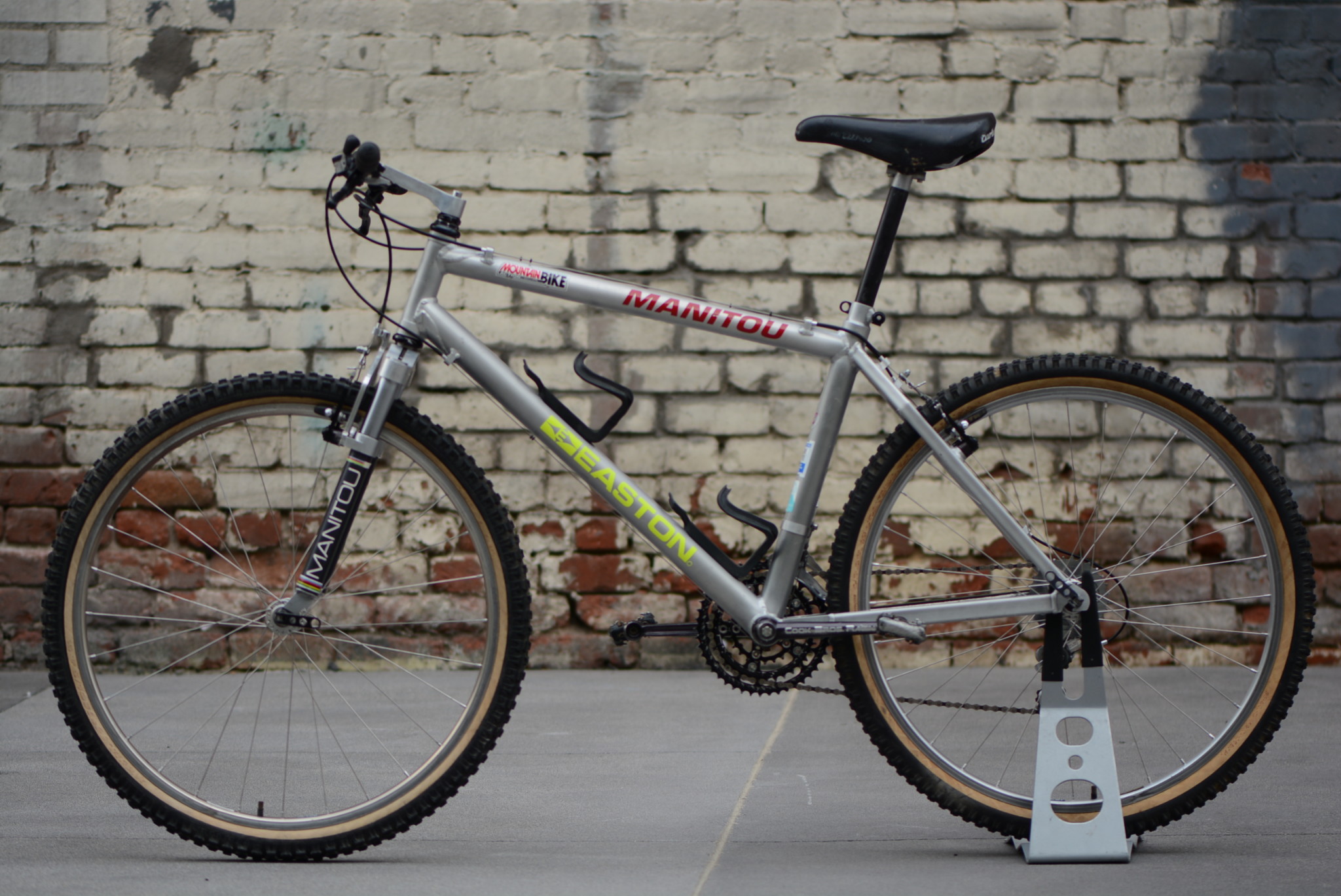 Seeing this bike in the flesh is really something else. For me the Manitous have always been a personal journey. I fondly remember reading all the reviews, ordering catalogs and building them in my head, hoping to just see one someday. Well, it took a while but with a little patience and some hard earned cash one eventually became mine!