Classic Ti at its best

This 1989 Merlin Titanium (S/N 1949) is arguably the perfect iteration of a classic late 80s early 90s Titanium mountain bike. The folks at Merlin started building Titanium mountain bikes in 1986/87 and by the time this bike rolled off the line they were on their third iteration of the design resulting in one of the better riding Ti bikes of the era. When Merlin and others started building Ti bikes there was a relatively small selection of tubing sizes to choose from resulting in the early bikes using two to three different tubing sizes (1 1/4″ for main and 3/4″ for rear triangles) for the frame and flaring out the tubing to allow for headset and BB installation. The second iteration added larger size tubing for the HT and BB shell but retained the same tubing for the front and rear triangles, while this version utilized 1 3/8″ tubing for the downtube keeping everything else the same. The subsequent version would see 1 1/2″ tubing on the down and top tubes and 1 3/8″ on the seat tube with 7/8″ chainstays replacing the 3/4″ ones and retaining 3/4″ seat stays, albeit with a s-bend to allow for wider rear tires. 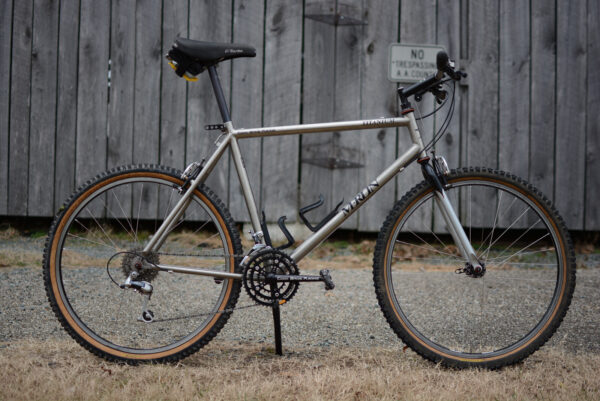 I picked up this bike back in 2013 or maybe even 2012 for around $200 largely due to the fact that the original decals were missing. It was equipped with a WTB rear brake, some generic fork and mostly Shimano M730 era XT with some M732/735 sprinkled in. The frame was generally in decent shape, but required a refinish and new decals. 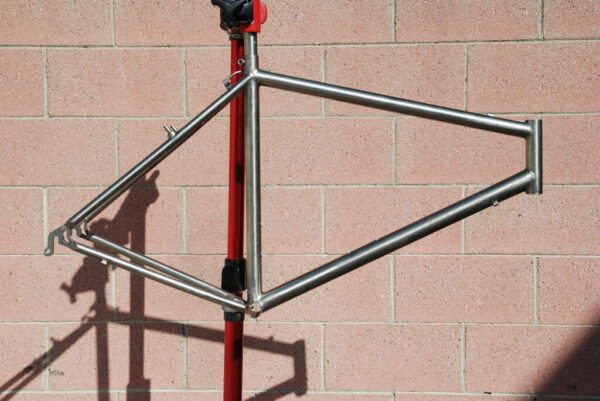 One of the benefits of Titanium is the fact that it doesn’t corrode and can be refinished almost infinitely. A couple hours with a scotchbrite pad, some water and it was as good as new. I managed to source some correct decals and the frame was ready to build.

When I first restored this bike I was very new to WTB line of components and didn’t yet being to collect them so the initial build lack the final Type 2 fork and front roller cam brake. 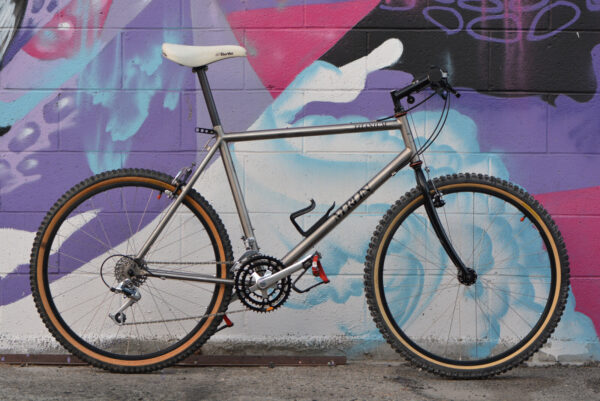 A couple years later I found a donor Potts CCR with a Type 2 and another pair of roller cam brakes and was able to complete the build the way I wanted it. Since I wanted to ride this bike I opted for the trusty M732 XT grouppo and figured it was a good compromise not being exactly sure what year the bike was. Although it originally had M730 on it the rear spacing was 135mm and I wanted all the gears I could get on it.

The jewels of the build, if there is such a thing are undoubtedly the pair of black WTB Speedmaster roller cam brakes. Over time more and more of my bikes starting sporting these, but this Merlin was the very first one. 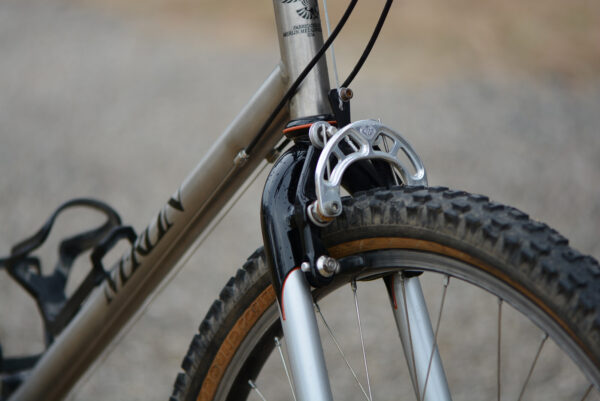 The Steve Potts Type 2 received a custom paintjob with a very subtle orange pin stripe to match the o-rings on the WTB/CK Grease Guard headset and the Ringle QRs, a small but very pleasing touch. 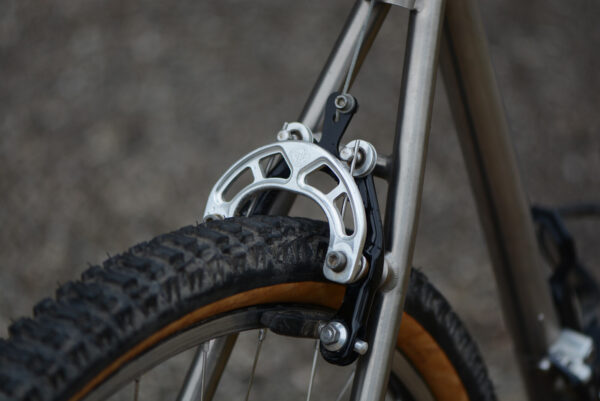 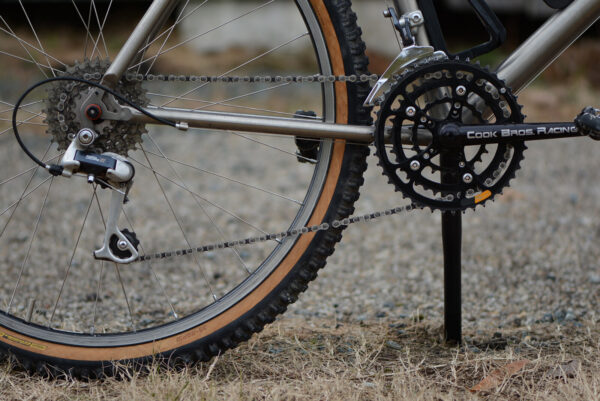 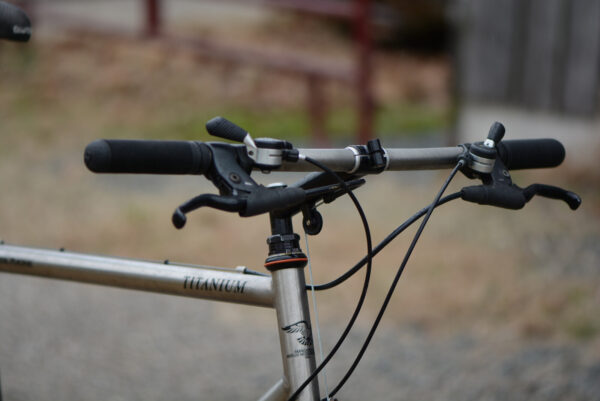 The cockpit follows standard procedure with a Salsa Moto stem and early Titanium handlebar. I am not actually sure who made this, but it may have been a Fat Chance or maybe Merlin. 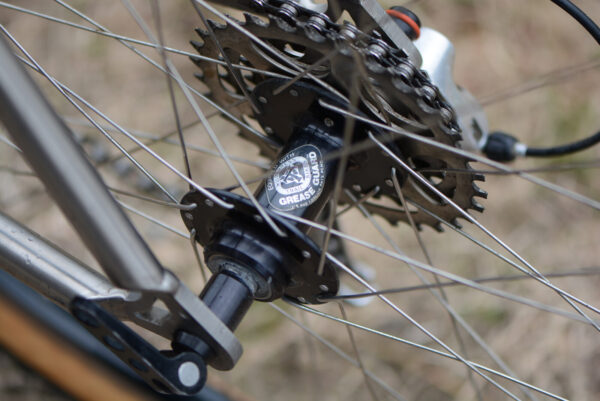 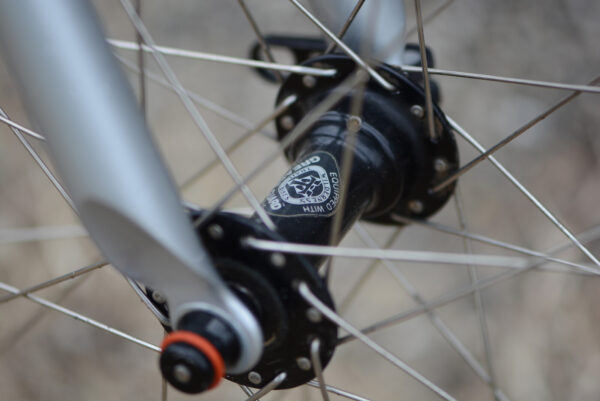 Having had a few of these pass through my shop it’s very interesting to see first hand both the evolution of the design as well as the skill of the craftsmen making the bike. The early Merlins had rougher and far less refined wells, whereas this bike sport smooth and precise welds, emblematic of a team that’s been at it for a few years. 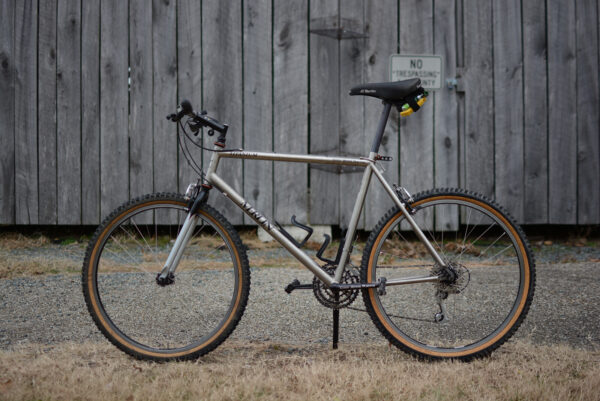 These early Merlins are rather tough bikes to build, I still vividly remember agonizing over part choices and colors that would accent rather than take away from the frame.

I must admit that I’d fancy a bit brighter build in the future, maybe with a dayglo yellow accutrax and matching stem, and factory dayglo yellow decals, something to make the bike pop a bit more. That being said for my first outing I chose to go for subtle and classy and have never regretted it. The Type 2 fork and matching RC brake really tied the package together and until I got the WTB Phoenix this was my favorite before leaving California I raced the bike at the Keysville Classic race. While there a few of my heretofore Merlin naysayer friends threw a leg over the bike for a quick ride, and if memory serves me correctly they were all impressed. So, if you’re on the lookout for an early Titanium mountain bike and you want more than a garage queen find yourself a late 88 to 1991 Merlin, be on the lookout for the larger down tube and take a shot, I doubt you’ll be disappointed. 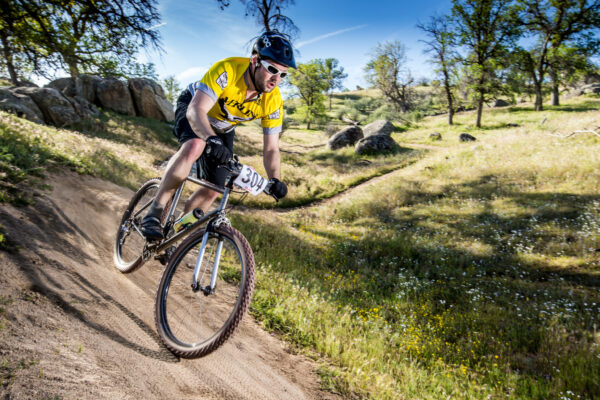