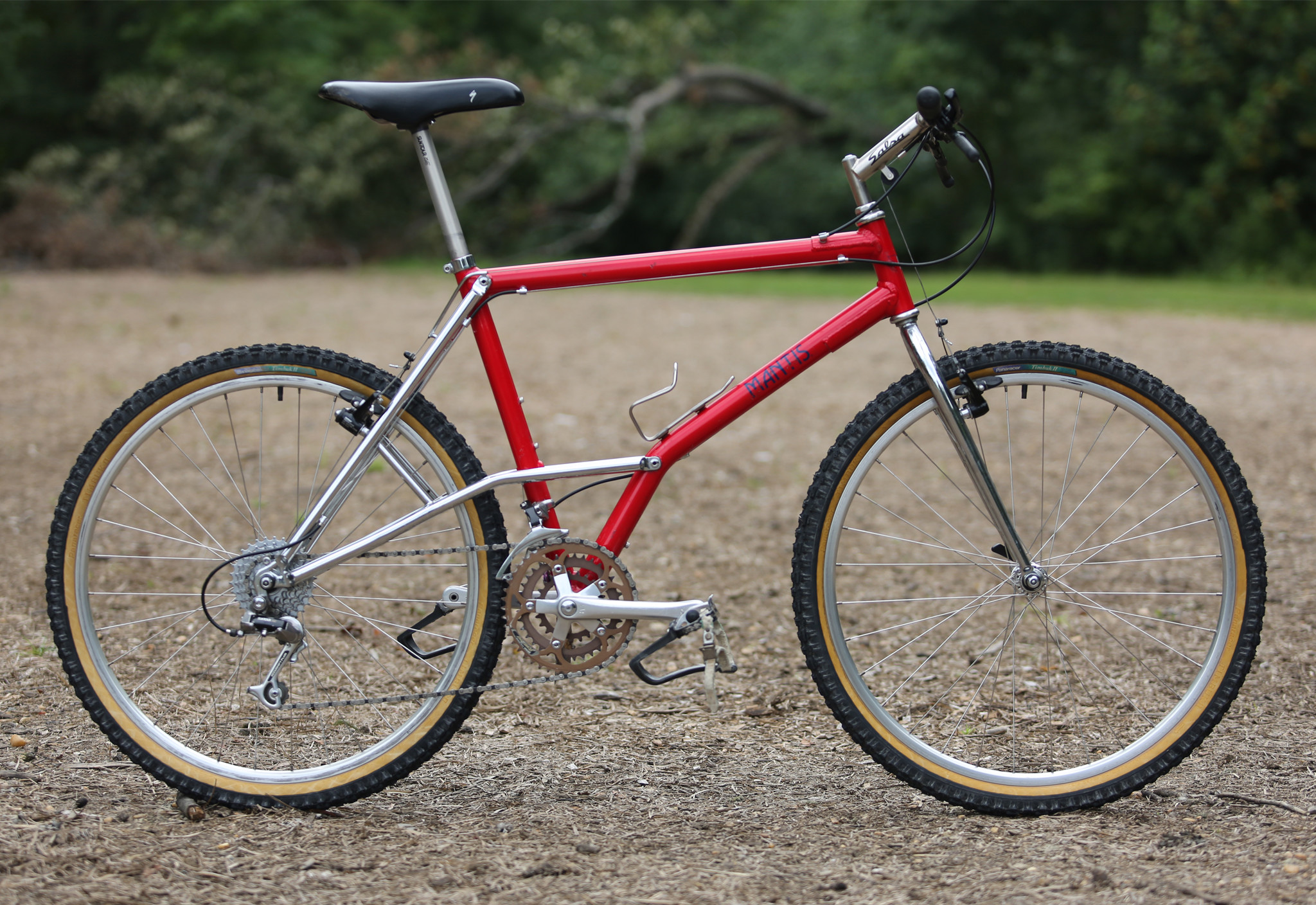 The Mantis Composite XCR mountain bike was one if not the first composite mountain bikes ever made. Well, maybe not composite in the way we might think of it today, but still no less true in the sense of the word. The original XCR released in 1983 as a fillet brazed steel frame was one of the first bikes made by Richard Cunningham under the Mantis brand [You can see two of the few known 83 XCRs here and here].  Then in 1984 Richard upped the ante and released the composite XCR. The idea behind this bike was the use two dissimilar metals where their specific qualities were best. Aluminum in the front for a stiff peddling platform and chromoly steel in the rear for compliance. Since you can’t weld the two metals the natural solution was to bolt them together. The early XCRs had a traditional double diamond frame design and it wasn’t until around 1989 that the elevated chainstay design first pioneered on the Valkyrie made it over to the XCR. The elevated chainstay version of the XCR debuted at the 1989 Interbike show and stayed in production almost until the sale of the company around 1994. Towards the end of Mantis Richard started experimenting with full Aluminum construction on the XCR and a few prototypes were made for the race team. Though more rare and by that measure possibly more collectable those bikes were hastily made and in my humble opinion fall by the wayside when compared with the earlier composite XCR and lack a lot of the uniqueness that make this bike so fascinating. 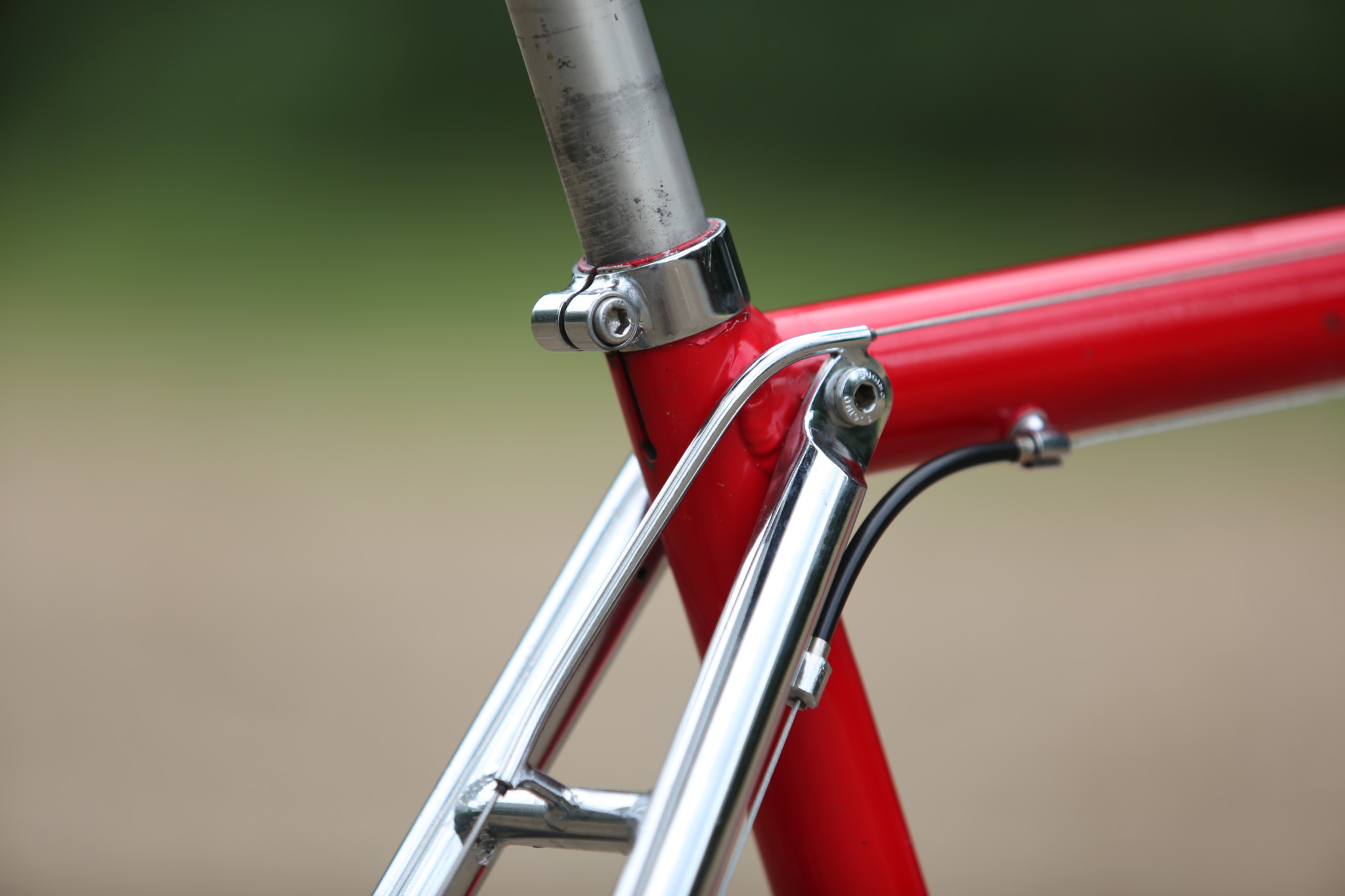 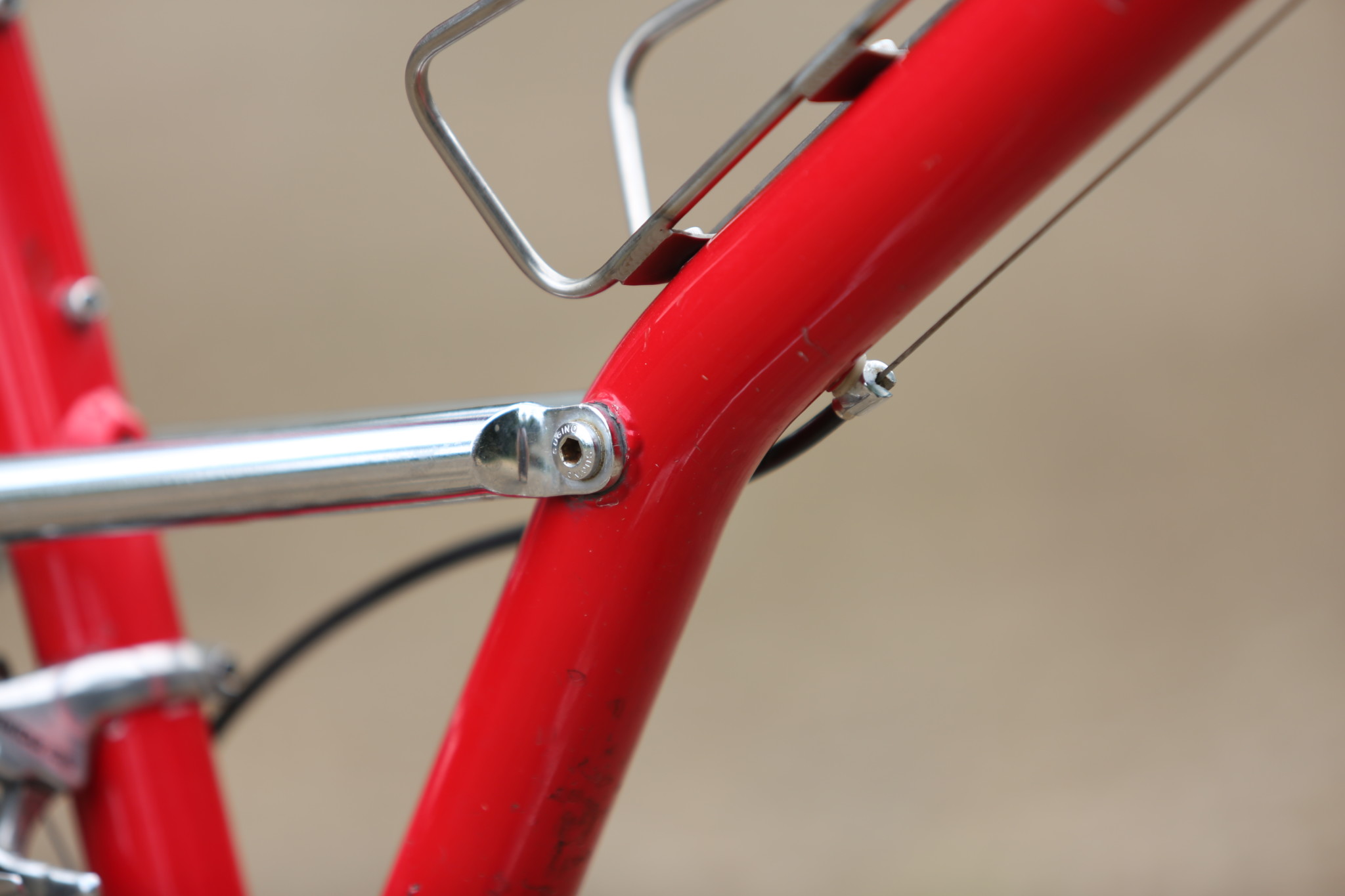 What I really think is great about this bike is just the sheer creativity and in a way simplicity in it’s execution.Sure you might say it looks all complicated, and weird but really if you think about it it’s not. Let me explain, if you wanted to build a steel bike and make it really stiff, you’d have to get large tubing which for one wasn’t available in a great many sizes and then it would be heavy. The opposite goes for Aluminum (which was rarely use on mountain bikes were rare in 1984) if you want it to be compliant you need to get fancy with butting and custom drawing of tubing which wasn’t doable in those early days. So, if you want compliance you take normal thin gauge steel tubing and if you want stiffness you take straight gauge, oversize Aluminum tubing. The problem though comes when you want to marry the two. In case you didn’t know, you can’t weld dissimilar metals. So, you could glue it, but who in their right mind would do that on a mountain bike (turns out people did), or maybe make some sort of high tolerance press fit, or you could use the oldest trick in the book and bolt it together. Which is exactly what RC did in this case, using Sugino seat binder bolts no less. Can you imagine that order coming in??? I need 3000 seat binder bolts… the person on the other line would think you’re really doing well selling that many bikes, only to find out you were using 4 bolts per frame. Then again, RC was known to use Sugino binder bolts as chainring bolts, so maybe they weren’t surprised at the volume order. [Side note : anyone know the other example of a bi-metallic mountain bike built later on??? Hint : It’s not a duck] The final result is really quite impressive if you take it at face value and rewind the clock to 1984. The bike actually rode pretty well, they weren’t known to fail and were quite light by the standards at the time (this bike weighs 25.8lbs). The front fork is steel as well which in a way balances out the rear and makes for a fairly predictable ride characteristic. 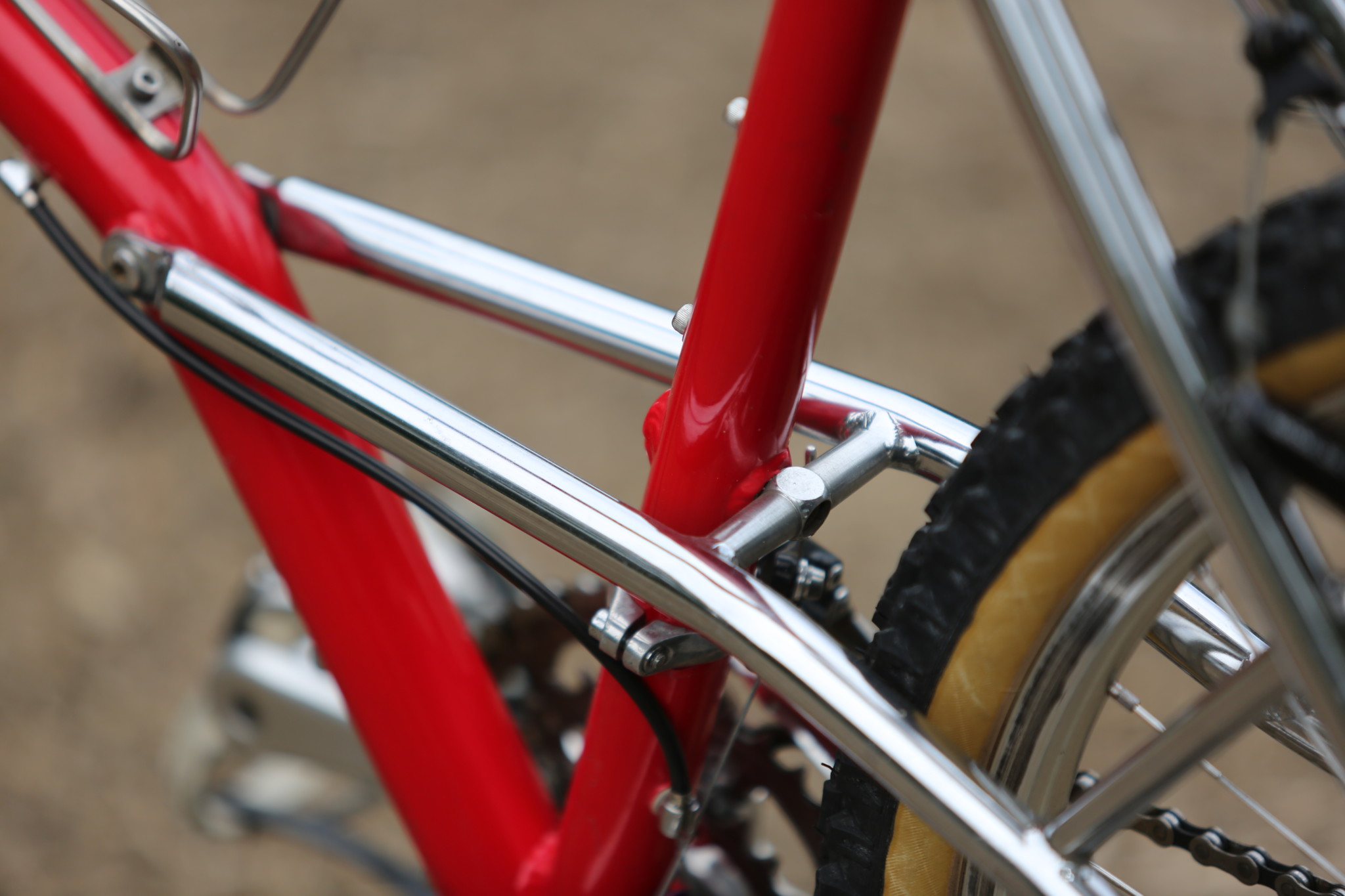 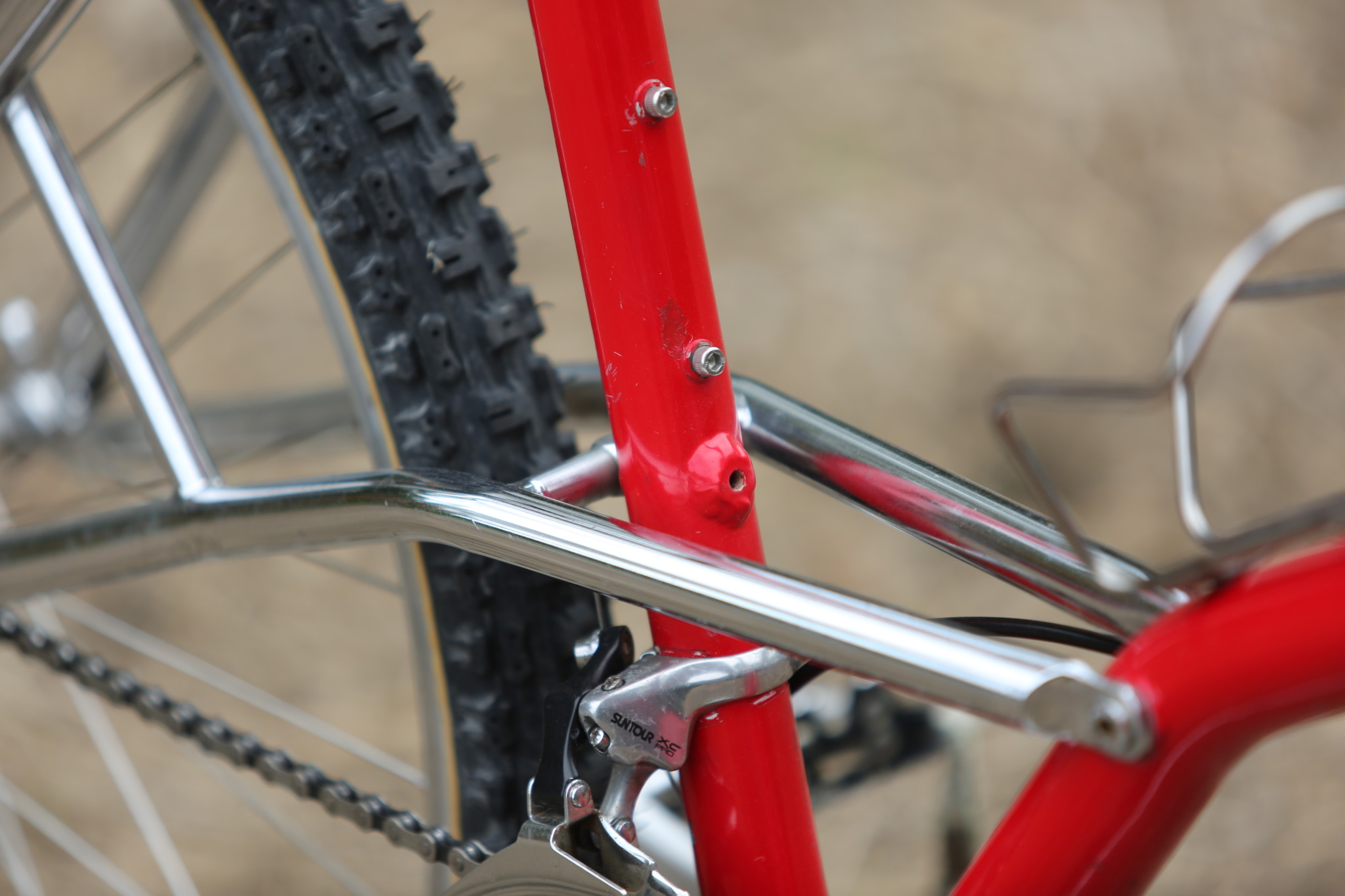 The elevated chainstay version of the bike is a bit more flexy in the rear than it’s non elevated counterpart, but it’s not terrible. At the time of writing this piece I’ve done a couple laps on the local trails and found the bike pleasant, thought not immensely exhilarating in any way. These were shakedown laps and on old weathered 2.0 tires so I took it quite easy. I plan on putting bigger, modern tires on it soon and properly putting it through its paces. I’m not sure I expect to be surprised but I think it will go down as a bike that captures a point in time very well and basically does its job. 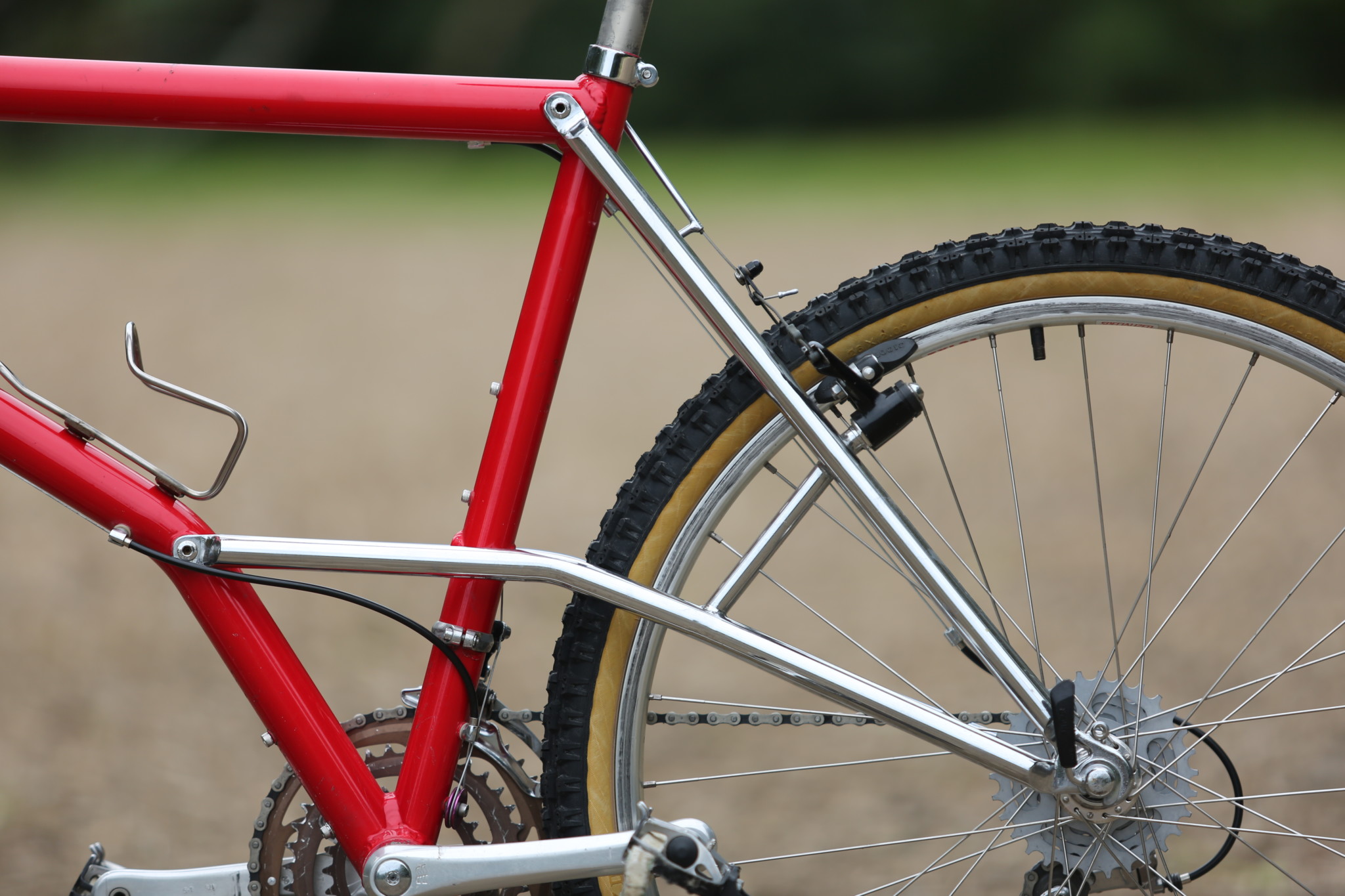 The build is full Suntour XC-PRO with Grease Guard, thought does not feature Micro Drive. When I first got the bike it actually had MD on it, but the rear hub was completely rusted out and I had to replace it with a freehweel version and I didn’t have any MD freewheels around so I converted it to the standard or Power Ring version. Aside from that the only other notable feature on this bike are the Suntour made Pedersen Self Energizing rear brakes. These brakes used the motion of the rear wheel against the pads to twist an internal spring which effectively gave you more stopping power… or rather more power applied to the rim, what the tires did with that is a whole other story. In this case the rear stays are a bit soft for these brakes and the result is somewhat squishy and grabby non modulating feeling. Maybe it needs more tuning, somehow I doubt it. 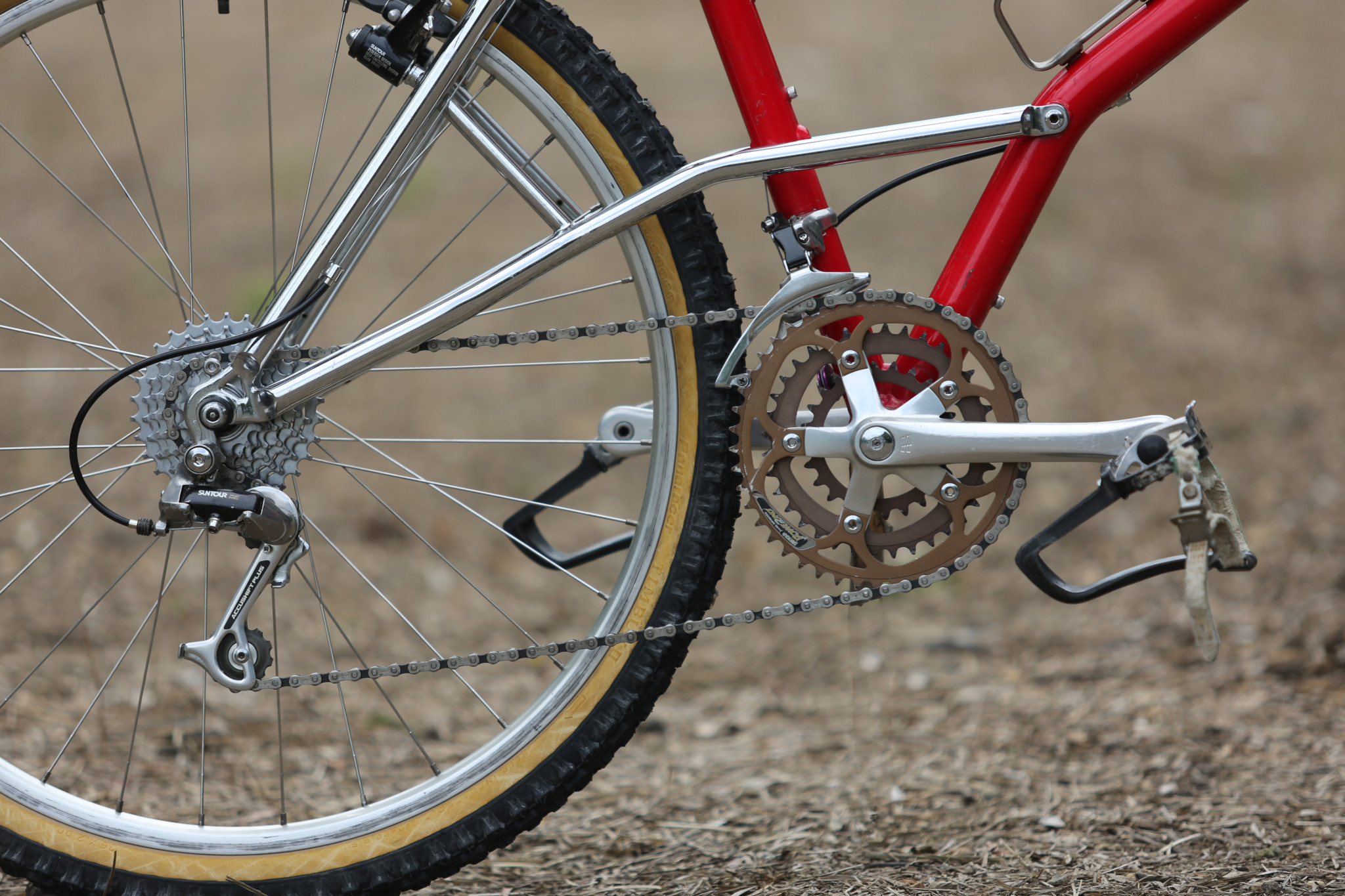 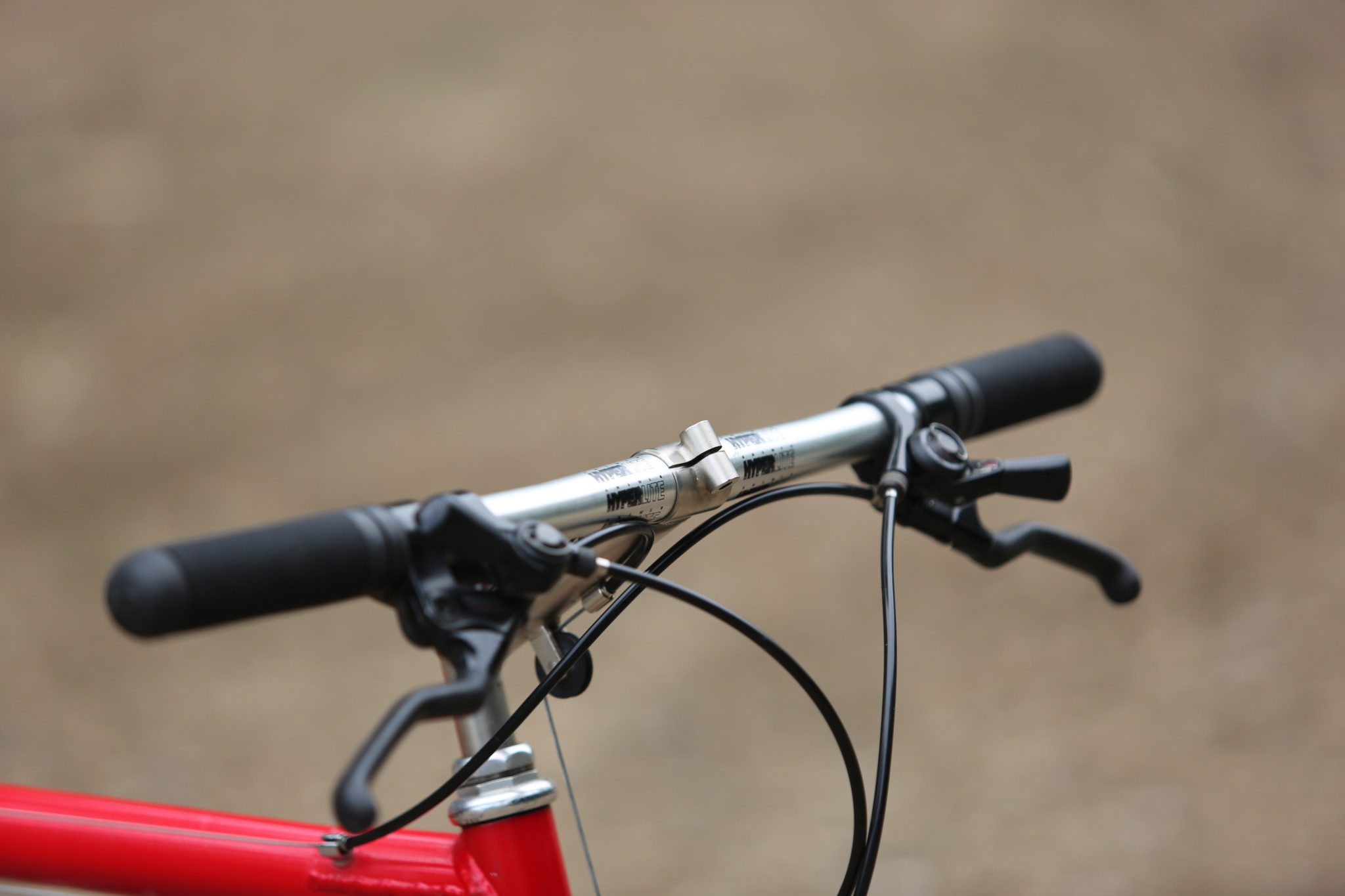 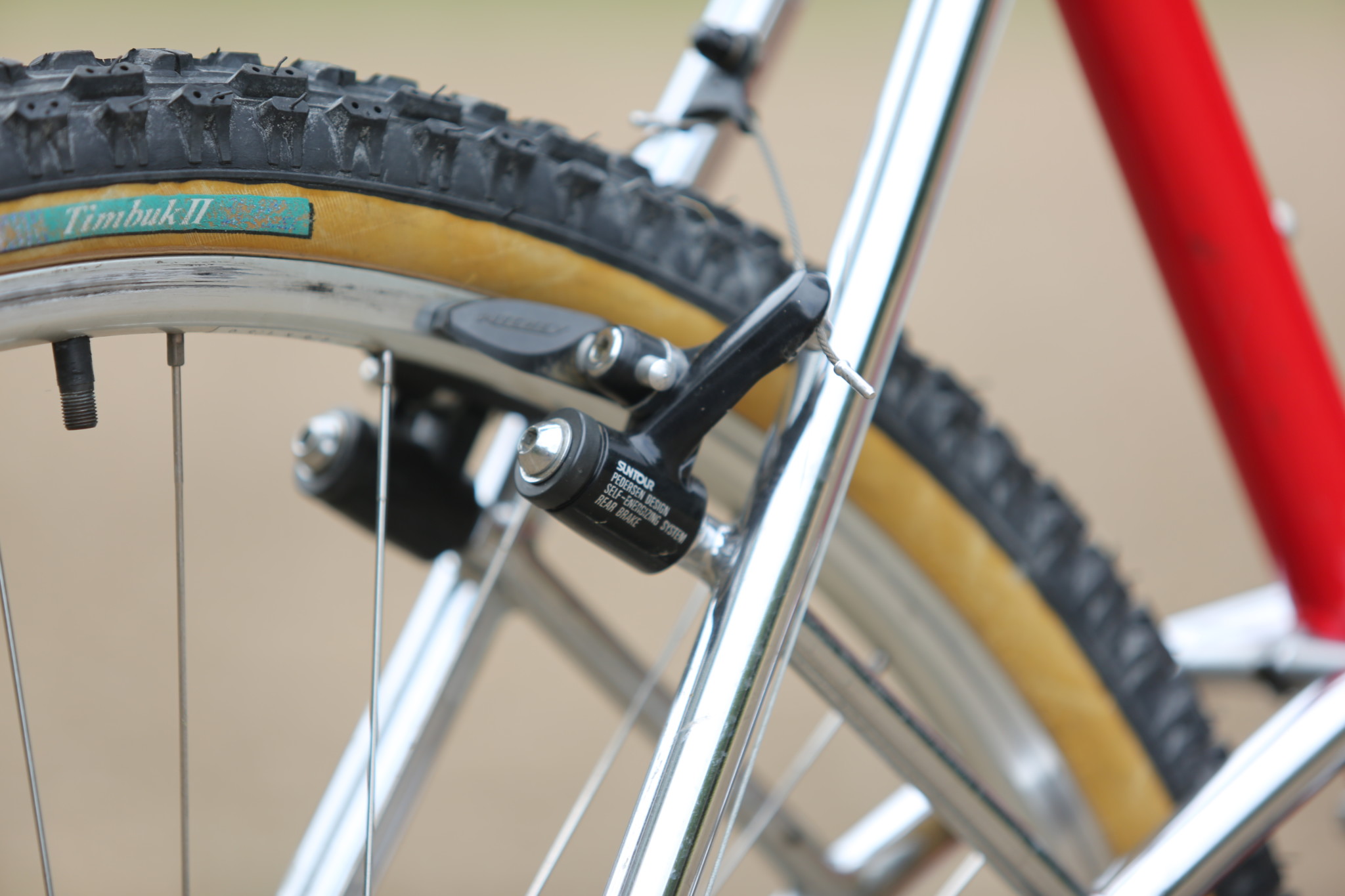 One last thing I like or rather find uniquely interesting about this frame is the contrast between the beautifully brazed and formed rear end and the somewhat crudely welded front triangle with its massive reinforcing gussets. Richard was used to working with Aluminum (he built light weight airplanes) but his technique was not much more than practical, whereas he was quite skilled with the torch when it came to steel and was well known for his un-filed fillet brazed frame. 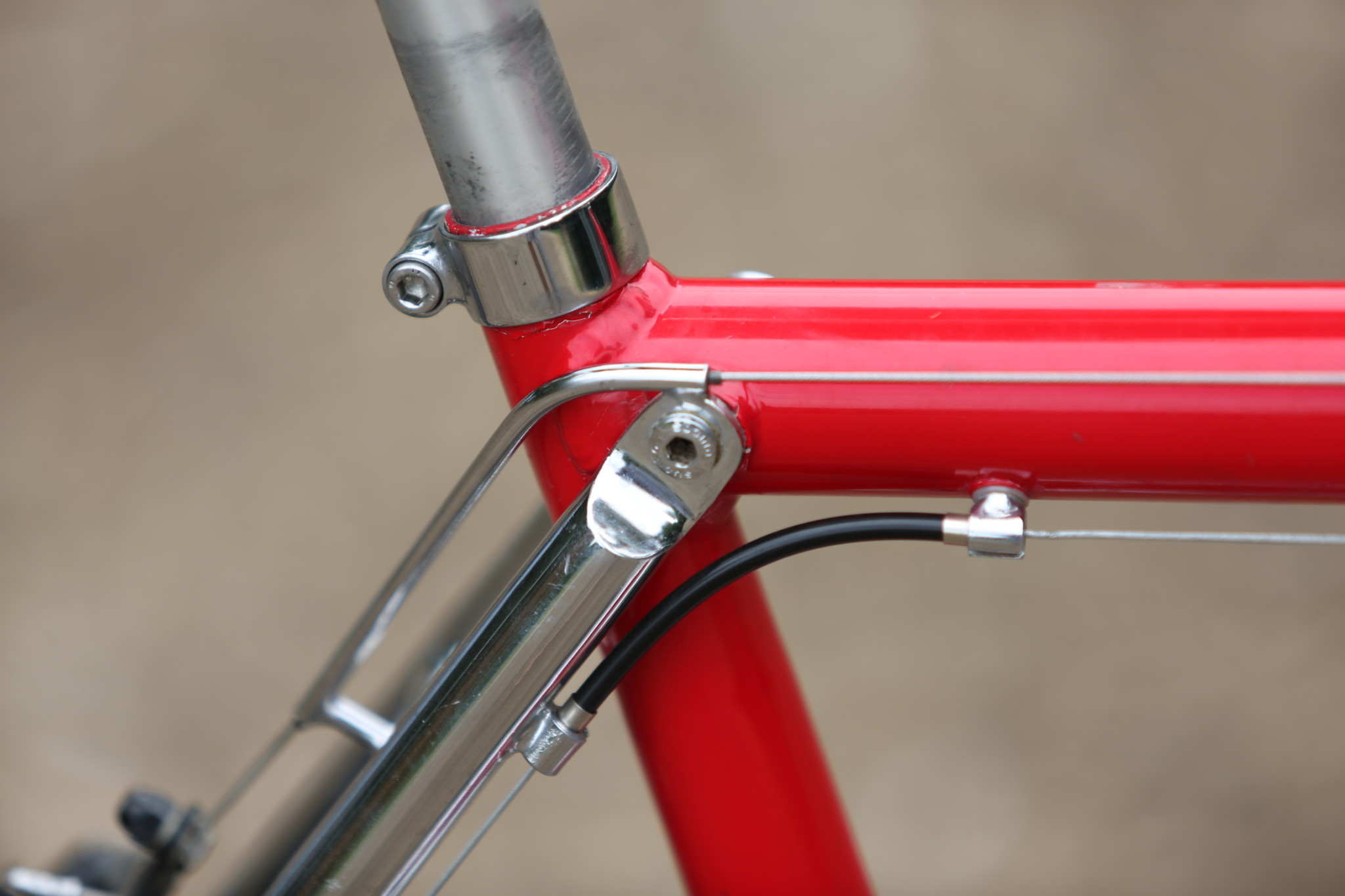 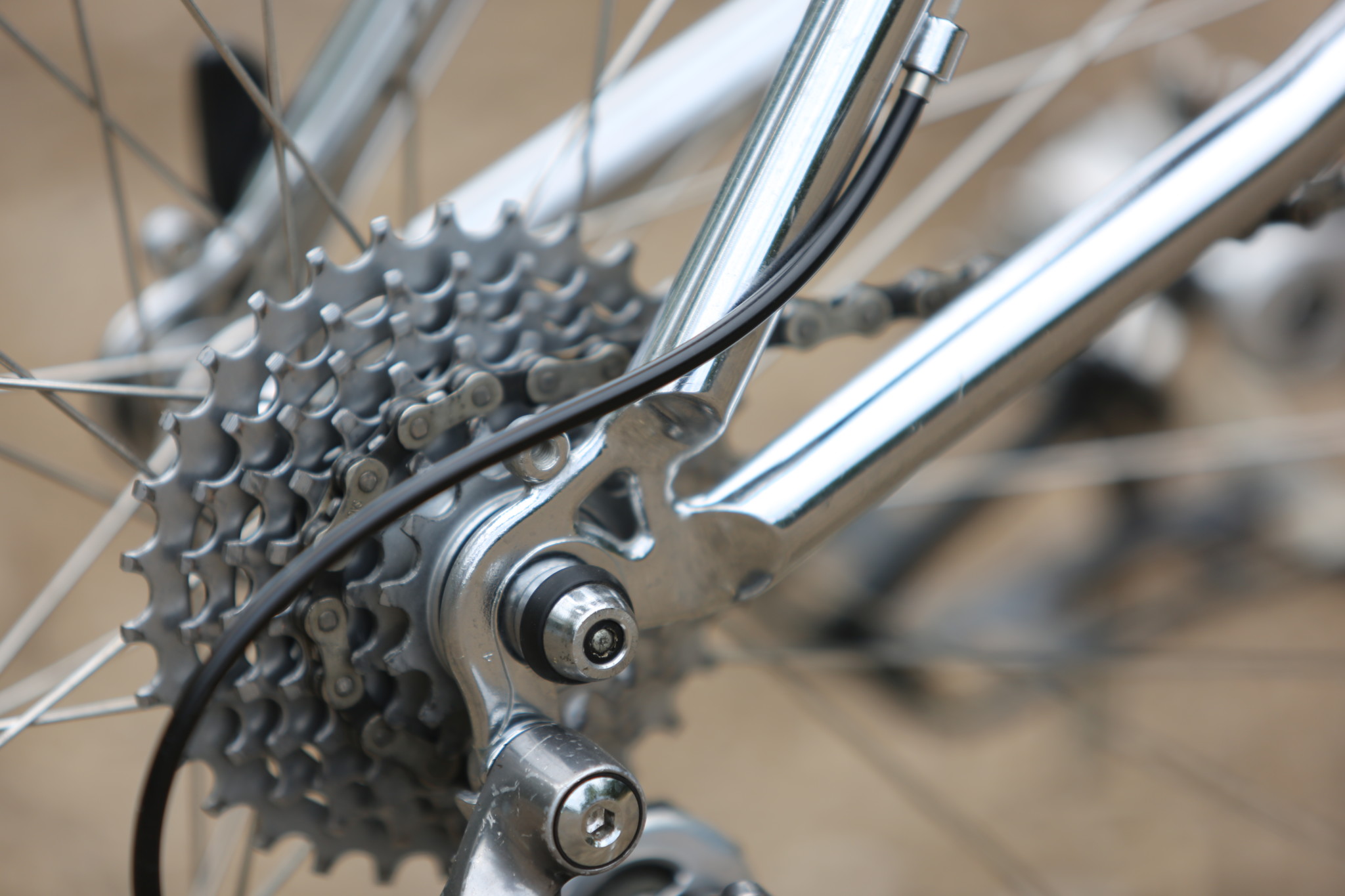 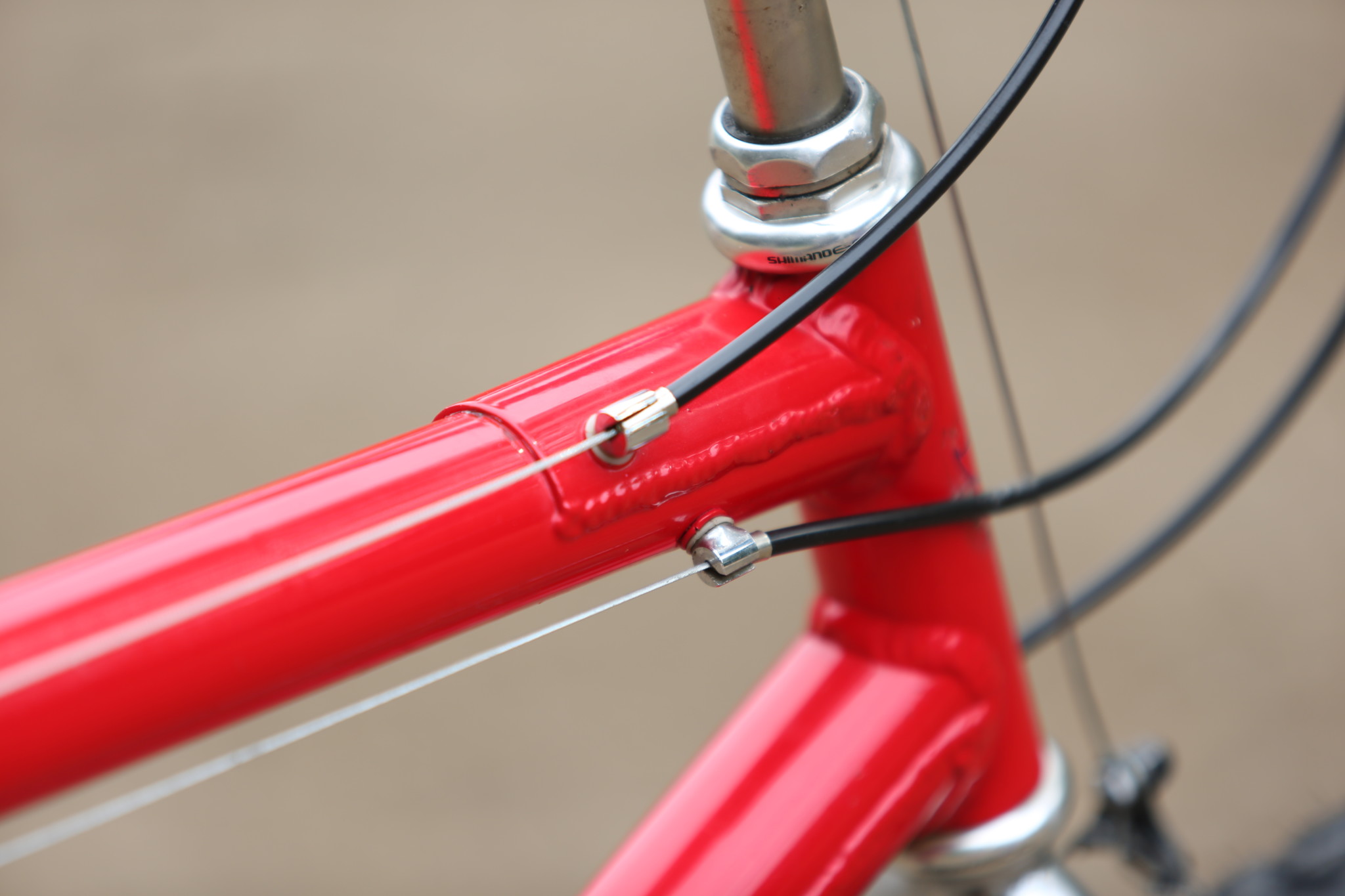 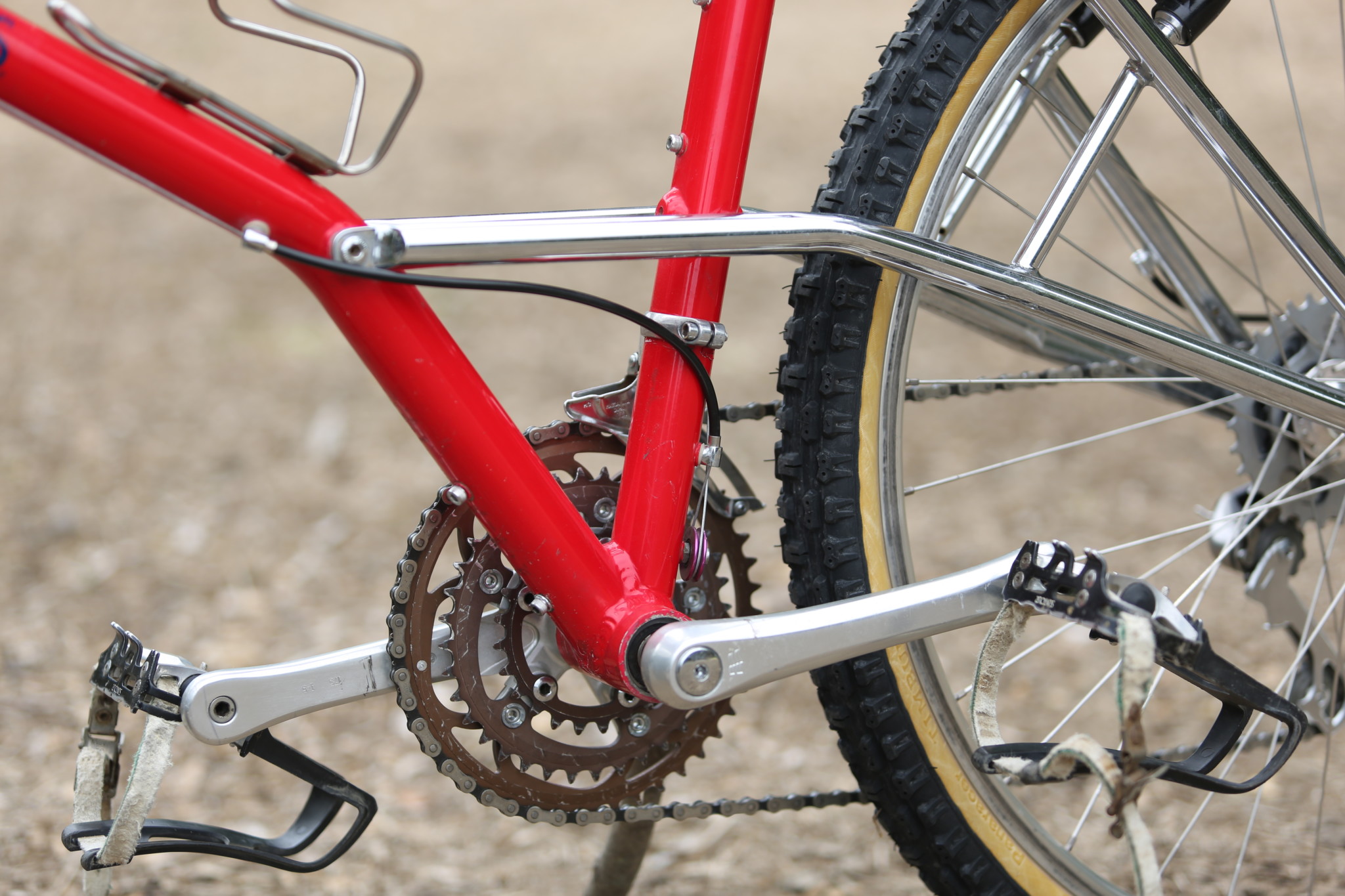 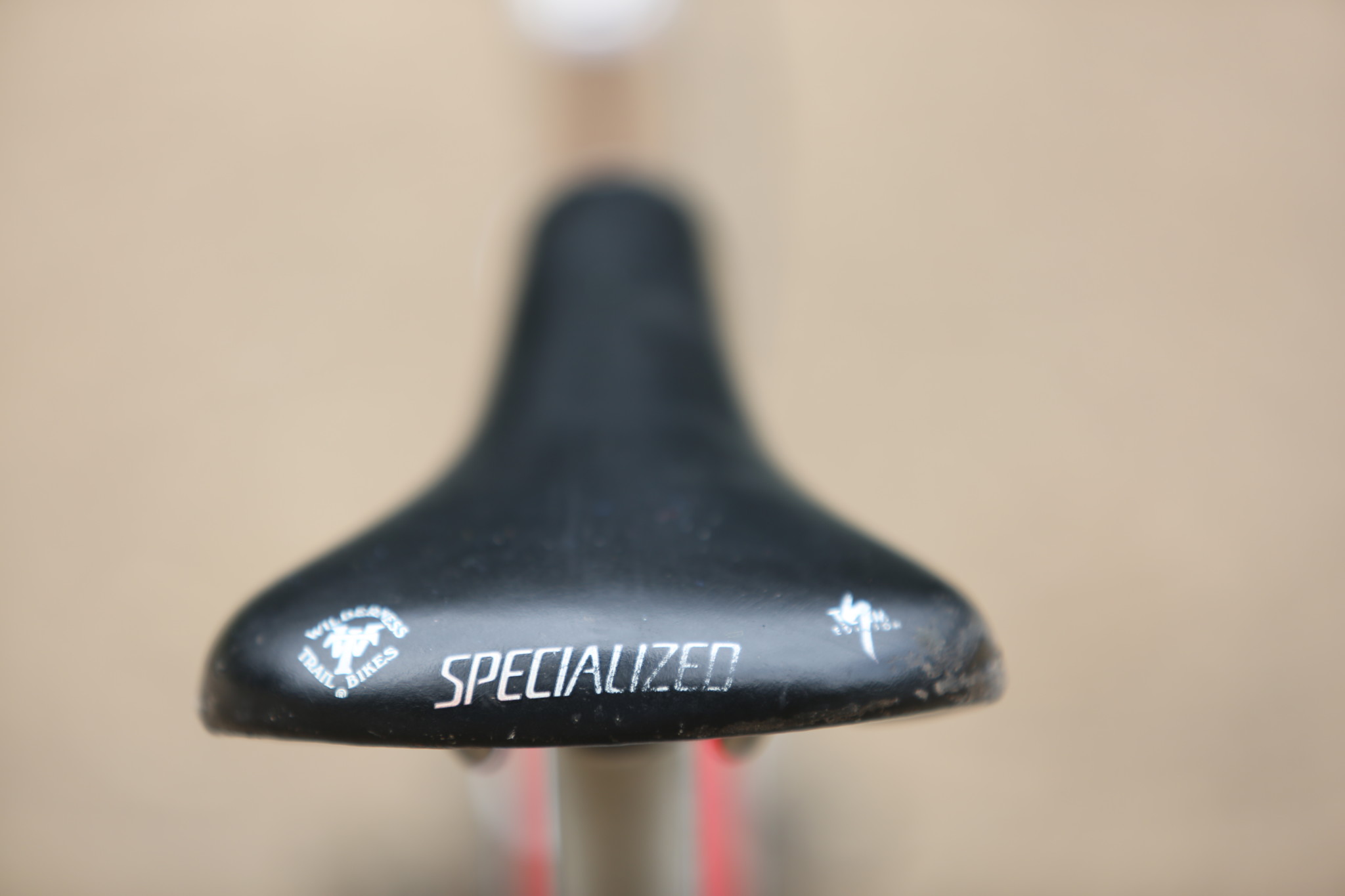 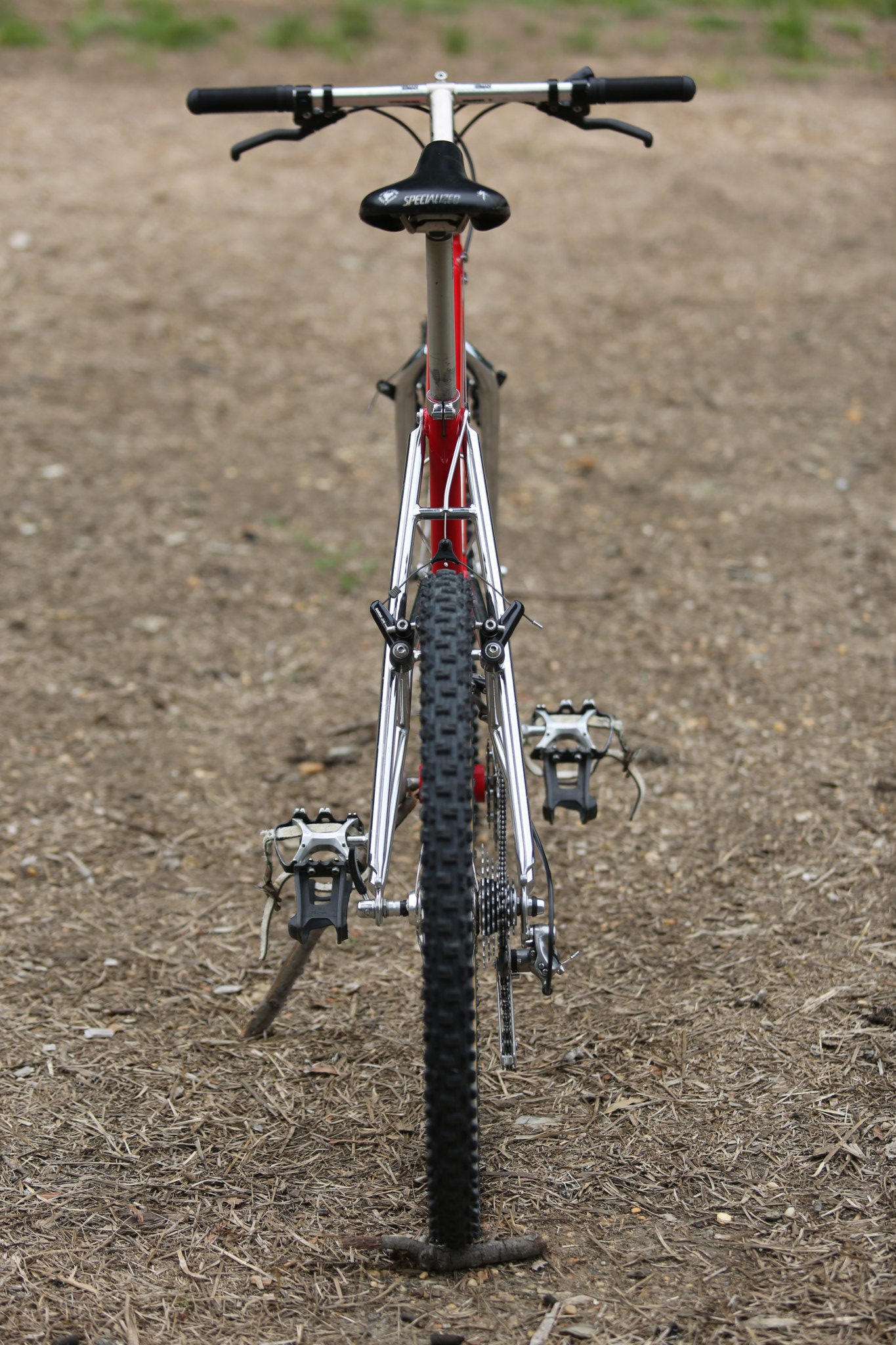 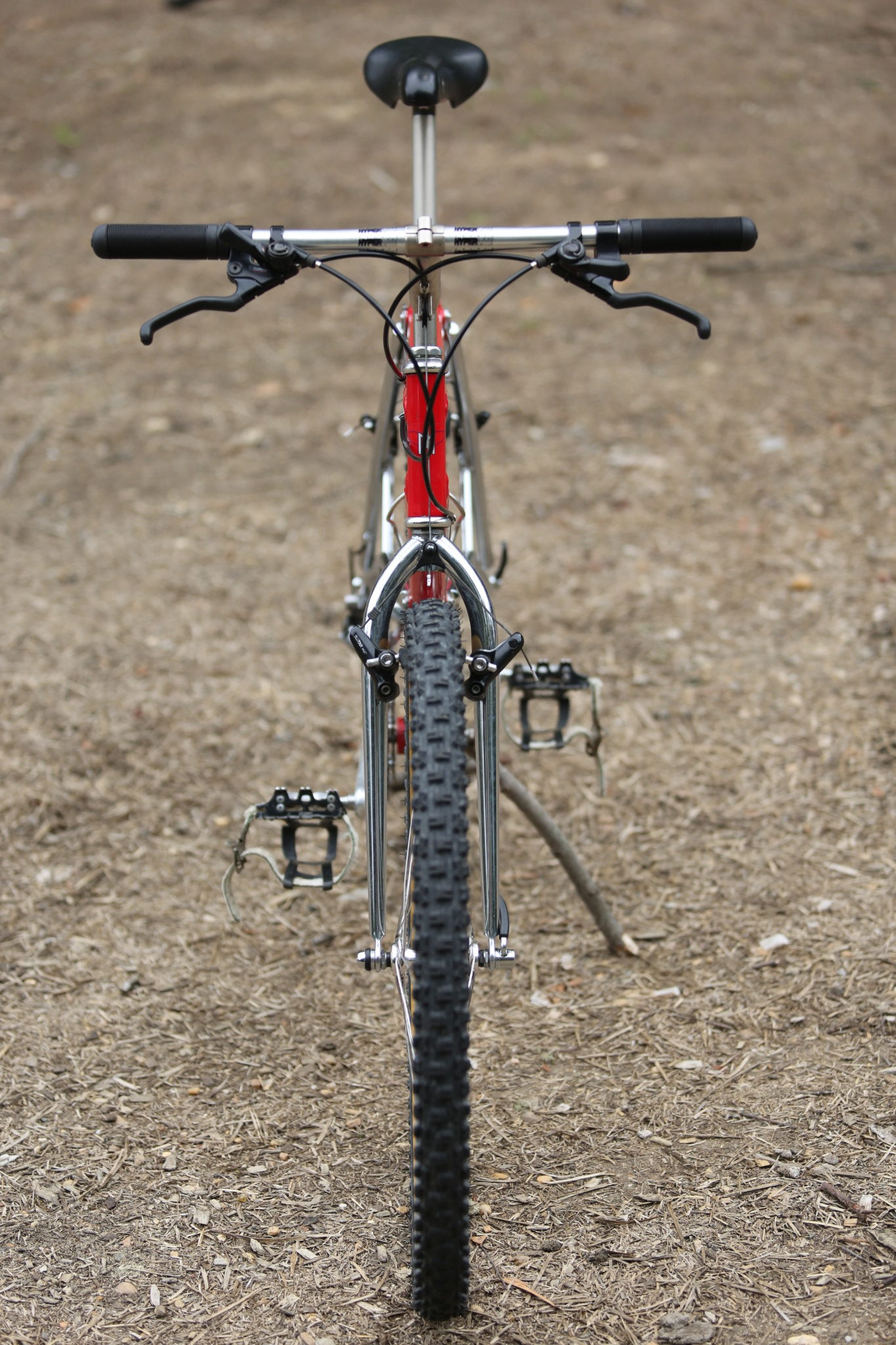 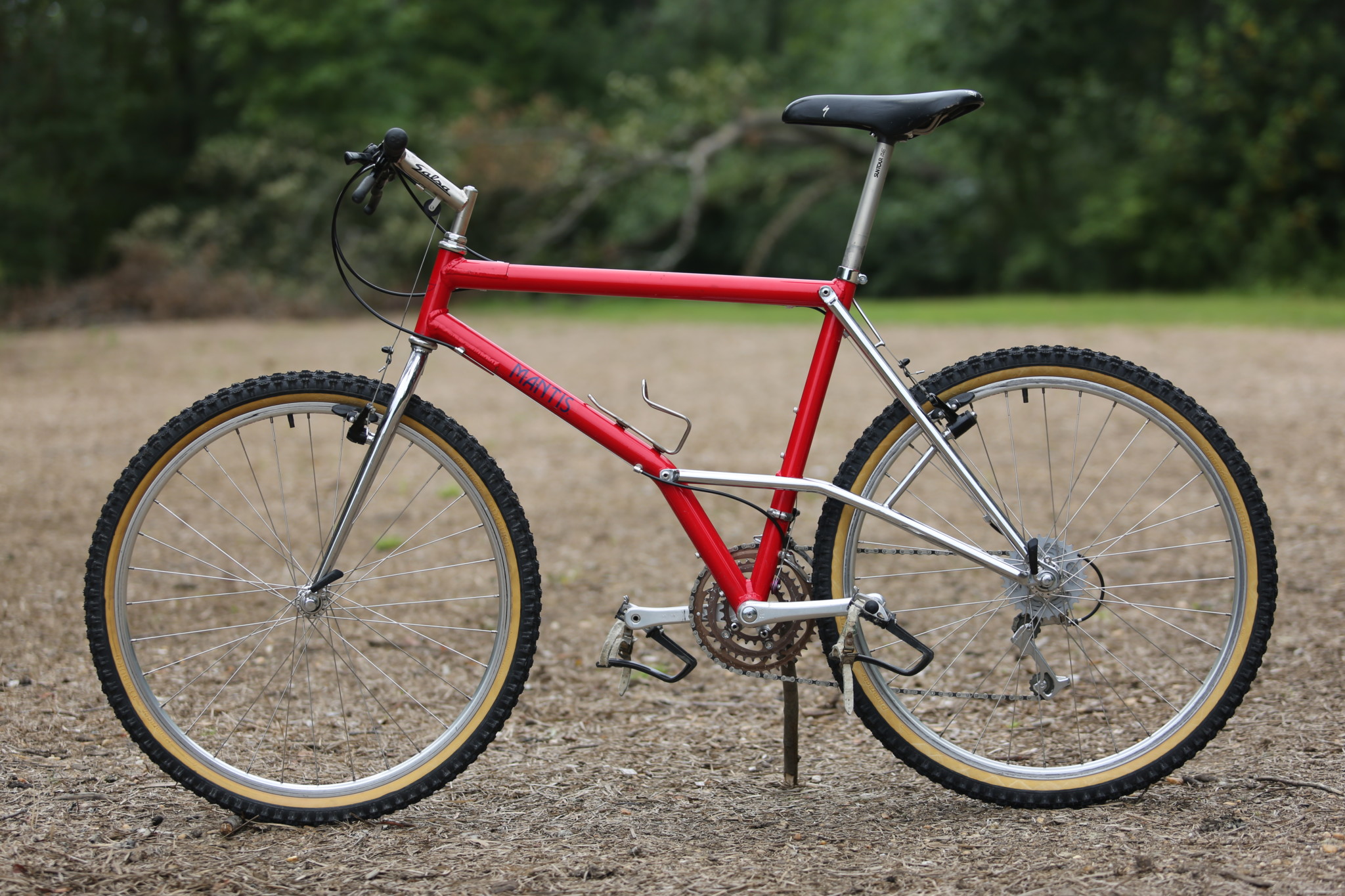